Disaster on a Brompton going to Box Hill!!

Early this evening I set off for Kew Gardens for a ride to the infamous Box Hill and back again. This is a ride I have done twice before but this particular ride would prove to be dramatic in more ways than one!

Most of those going on tonights ride drove down to Kew Gardens. I set off at 17:10 knowing that traffic would probably be pretty bad however my assessment was wrong as it was terrible. I arrived just before 19:00. Quickly setting up my bike up and pumping up the tyres I cycled the short distance to the main gates of Kew Garden which served as our meeting point.

David, Anne, BumbleBee, Mark, Jenny and Adam were already there and with Robin arriving shortly after me we headed off. The pace was brisk and we were making good progress.

I was looking forward to cycling up Box Hill. As I have written above I had done this twice before. The first time I was quite apprehensive but once at the top didn't think it was that bad. The second time I found easier, perhaps as the sting had been taken out of it having done it before. On both occasions I ascended without problems and completed the route without a foot hitting the ground. This time a few days before I had actually laid down a fairly jocular challenge to David and Mark that we should have a race to the top. I was feeling confident as I knew that Box Hill would not present any problems for me.

Every so often we would stop to regroup. As far as the weather was concerned, it was hard to believe that it was October. The night was warm and many of us either took off a layer or pulled down zips for added ventilation.

There were a few hills on this route and from about 10 miles onwards up to Box Hill it was uphill all the way. I do love hills and relished the prospect of attacking them at every opportunity. A year ago I might have thought them to be pretty tough but after lots of rides with bigger hills over the last year and desperately trying to keep pace with David and Mark, they weren't that bad.

I had taken two front lights with me on this ride. My old CatEye and my Cree. (The Hope Vision is out of action for the moment - more on that another time). The CatEye compared to the Cree even on its lowest setting was by comparison pathetic. Despite this I had the Cree turned off for the most part until I felt I really needed it. When we had to cycle through a bridal path the requirement for illumination was vital!!

This particular bridal path was obviously very well used. I knew this by the copious and quite gigantic horse droppings festooned across our passage! I shudder to imagine the size of horse that produced some of them but they reminded me of the part in 'Jurassic Park' where Jeff Goldblum remarks on the size of dinosaur dung. Luckily I saw the first pile in time and after this the Cree front light was switched on with its full 1800 lumens lighting the way. In doing so it allowed me to navigate the dangers of cycling right through the middle of one!

At the top of one of the steeper hills I waited for Robin who had done incredibly well up to that point. Unfortunately, cramp had taken hold which slowed him down somewhat. With another short hill in sight I raced ahead and said I'd wait at the summit. Once there we all regrouped before enjoying a sustained downhill section. It was towards the bottom of this that the disaster happened...

Without warning, noise of any kind and very suddenly I started to freewheel. I knew instantly what this meant and applied the brakes. My chain had snapped and lay half on and half off my bike. Examining the chain as best I could I couldn't see any of the super links. These are special link that allow you to take the chain off. Upon first inspection it looked as if it were just the super links had some how come off. (When I got home I had a closer look at the chain and compared it to a new one. There were several complete links missing in addition to those containing the super links).

This happened at about 21:20 and with a race on to get to the 'Smith and Western' wild west themed pub before they stopped taking orders for food, the other riders had pressed on. With them all ahead there was no way of knowing if they had some spare chain links or a chain splitter...

David kindly stayed with me part the way. At one point there was good downhill which I was able to freewheel down. On the flats David offered a hand. I took it and hand in hand he valiantly dragged me along. It has to be said that nothing in life really prepared me for this experience.  For a few brief moments strange visions flashed through my mind. Torvill and Dean's Bolero routine at the 1984 Olympic Games. Ginger Rogers and Fred Astaire in 'Top Hat.' Dame Margot Fonteyn and Rudolf Nureyev in 'Giselle.' It didn't last long as David was finding it tough trying to drag me up a hill so our hands fell from one another... Considering we were destined for a Western themed bar it was all getting too Brokeback Mountain.

Reaching the foot of Box Hill I told David to go ahead. This time I would be walking up Box Hill. My notion of racing was dashed, I resigned myself to walking up as quickly as I could. With a combination of running and walking I caught up Robin and headed off. Walking up Box Hill in the middle of the night was an eerie experience. Foxes and owls kept me company and it is no wonder that in days gone by, people upon hearing such creatures, likened them to banshees or witches. With this thought now implanted in my head I doubled my effort!

Eventually I reached the top of Box Hill. It was not the way I had intended but I had reached it. The 'Smith and Western' pub wasn't too far away so after trying to take a picture of the view I pressed on.

Eventually, I reached the sanctuary that was the 'Smith and Western.' My fellow riders gave me a cheer when they saw me and I was soon seated, ordering some food and a cold soft drink. Robin arrived shortly after.

The 'Smith and Western' is a visual treat. Americana is in abundance! There is even a dining section that is inside a gaol! Every so often the staff would come along to people celebrating a birthday, ringing a large rusty triangle and singing 'Happy Birthday.' The food was good too. 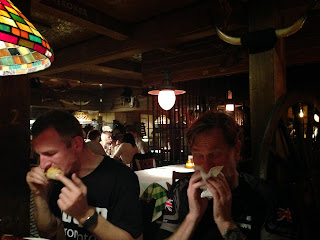 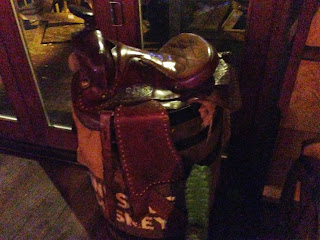 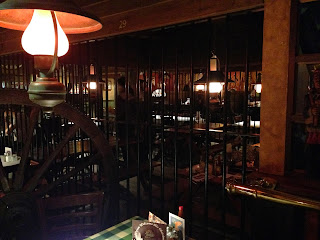 It soon became evident that a repair of my chain would prove difficult and it might not get me back to Kew Gardens. Resigned to my fate and with Robin not feeling up to cycling back we arranged for a taxi to take us back to our cars. I dislike public transport at the best of times but at this time of night I had no intentions of doing so. Luckily for me Robin was of a similar opinion.

With our taxi waiting we said our goodbyes and Robin and I were off. For us the cycling was over. The journey back to Kew went quickly. Robin told me about his former work and new ventures, both of which made me wanting to find out more. Reaching my car first Robin and I said our goodbyes.

What a night! Some valuable lessons learnt. Next ride I go on I will have a small section of chain and some super links as well as a chain splitter! I have these items sitting in a little plastic bag in the drawer of my study! I have not brought them on any ride as I regarded them as too heavy!

With cycling you just cannot predict what lies ahead. I have spare tubes, tyre boots, CO2 canisters and tools and no guesses for what else I will be taking! Until tonight I have not broken a chain. I have seen others break their chain on rides but this is a first. It was just one of those things I suppose. Still, it didn't spoil my fun and there is always next time. I am sure that I can persuade those who have yet to get up Box Hill without putting  foot down to have another go.

You can see my ride data and maps below for the first half of the ride.