Incredible Views From High Above London

I have been looking forward to today all week. If the weather was good I would get the chance to be one of the lucky few to ascend to the top of Tower 42 in the heart of the City of London.


Not able to take my Brompton inside Tower 42 and not wanting to lock it up somewhere outside, I was forced to use public transport for the majority of my journey - which I hated. I would have been much happier on one of my Brompton bikes.

At 10:00 a.m. we assembled outside Tower 42 and not long afterwards we were taken up by our leader David Lindo. For those of you who don't know who David Lindo is he is the brilliant chap who is famed for being the 'Urban Birder.' He is a successful author, presenter, speaker, tour guide and all round good egg who promotes trying to find wildlife in the urban jungle. He has an excellent book which I reviewed a while ago and I'll post the link to that review at the bottom of this blog post.

When we first arrived there was lots of haze and cloud making visibility poor. After about an hour the sun started to penetrate through and gradually the view became clearer.

There are many words to describe the view but I will simply let the photographs try and convey what I could possibly write. Seeing so much of London at such a high vantage point is quite breathtaking...overwhelming even. London has so many iconic buildings and landmarks that it is difficult to take them all in. 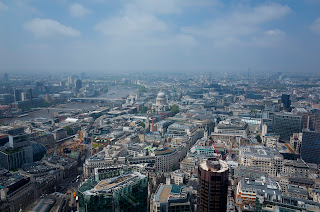 From the four compass directions at the tip of Tower 42 there was an incredible view of the many landmarks. A tiny fraction of them I have listed below:

The photos were taken unless indicated otherwise with my new Ricoh GR. The photos you see here are straight out of the camera with nothing done to them. I used aperture priority mode and generally shot at f5.6 - f8.

I have to say that I am really pleased with the results and the lens and sensor really do allow some pretty sharp images. I also love the colours which to my eyes at least look very accurate and as I remember them. I am loving my Ricoh GR! For me it is just a great little camera. 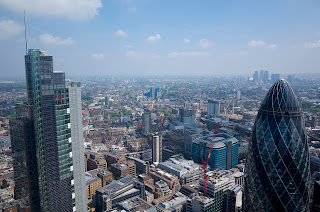 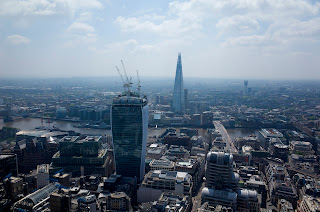 Again I have to report that the Ricoh GR produces some great images. When zooming in to the pictures on iPhoto the level of detail is extremely good, with little noise. At some point I will set up a Flickr account and put some of these and other photos on there so that you can have a good look. 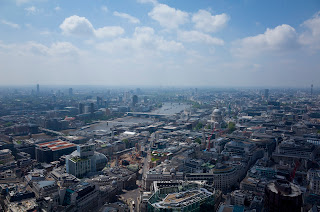 While up on Tower 42 were were treated to a female Peregrine Falcon sitting on top of a railing on one of the Barbican Towers. Two Buzzards circling high overhead and several gulls. 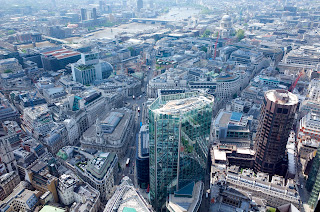 Another thing I got up to on the top of Tower 42 was to set up my GoPro on a new tripod I bought (mainly for use with my new Ricoh GR). I set the GoPro up to take a picture every 5 seconds at a few locations on top of the tower. At some point I will put them together in a time-lapse type video. If I can work out how to put it on blogger I will. 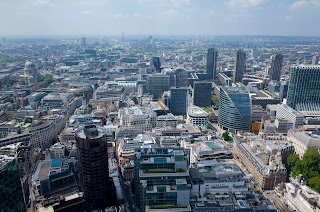 At 14:00 out time on top of Tower 42 was over. It had been a thrilling experience and I doubt if I could ever get tired of the view. Having a go at a bird migration survey in this location was very special. Special thanks to David Lindo (why does this man not have his own television series on urban birding or urban wildlife)?

As I write this I have another adventure to look forward to. At 23:00 I will meet a few Bromptonians at Charring Cross before heading off from Hyde Park to Whitstable. Keep coming back for me to tell you about that adventure...

My review of David Lindo's book, 'The Urban Birder.'