London to Southend Via Burnham-on-Crouch

Last weeks rather good Brompton Urban Challenge saw the start of a head cold as I reported in that blog. That head cold managed to find its merry way to my nose and throat with the result that I was sputtering, coughing and sneezing my way through the week.

With this ride to look froward to I did not ride to work once last week and Friday night was my first outing on my Brompton since last Sunday. I took the view that being stoic was the best option. Besides I didn't want to be like the sickly give up type that sits on the touch line with a note from Matron.  Stocked up with three packets of tissues (which I used up by the time I reached London) I headed off to Charring Cross.

Just after 23:00 I headed in to Charring Cross where I saw Geoff, later Mark and later still David and Anne. We made our way to Hyde Park Corner for the big off. The weather all of Thursday was dire. It was cold and it rained. Friday was not that much better. I suspect because of the weather and not wanting to make my cold worse I abandoned my travelling light. I took the much larger Carradice Barley saddlebag, waterproof trousers and my heavier Altura Night Vision Jacket.

The traffic in London was quite busy and as always getting out of the urban sprawl tool some time. The ride was again incredibly well organised and regular stops allowed the slower riders to catch up. 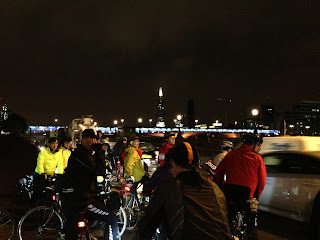 As we headed east we eventually reached Essex which was to be an eye opener. I have written before that I have had a sheltered life. On an Essex High Street not too far from Ilford this notion was again put to the test.

A young lady, I would estimate in her early 20's, was being helped along said High Street. The young lady was wearing next to nothing and attempting to walk in a pair of high heels that were so high they would have been been welcome in a circus. The gentleman helping her along decided that it would be quicker all round if he took his own shoes off and give them to the young lady. This seemed to work but sadly he did not put her shoes on and went barefoot.

At one particular moment the moon shone through the clouds to illuminate a large expanse of uninterrupted countryside with a lone oak tree and pre-dawn haze. It was quite stunning.

Just before the 30 mile point our route took us to a small ford that we were obviously intending to...well...ford. The recent heavy rain had obviously increased levels and we had to carry our bikes along higher ground.

Sanctuary came in the form of the Stock Village Hall. There we were treated to homemade rolls, hot drinks and the meanest slice of homemade almond slice I have had in a long time.

With our lovely refreshments over we hit the open road again and as we cycled along the sun was starting to rise, making the sky alight with a red/orange hue. Robins, blackbirds, wrens and yellowhammers all tried hard to out sing each other. It was a beautiful scene.

With over 50 miles under our belts we reached the welcome sight of Burnham-on-Croach and the even more welcome sight of the 'Cabin Dairy Tea Rooms' The Bromptonians decided to sit outside and view the picturesque river Crouch. Small sail boats dominated the view and wispy cloud was outnumbered by a cobalt blue sky, hinting that Saturday was going to be a fine day. 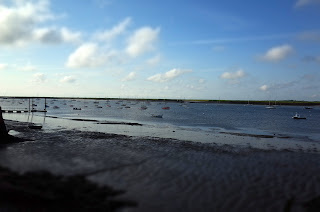 Breakfast for me was a full English with tea and toast. It was very good and once we had all finished we said our goodbyes to the other cyclists and headed off to Southend. 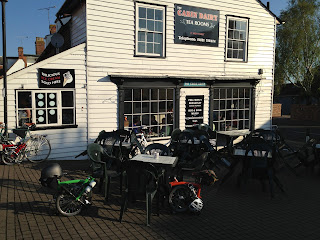 In order to make our way to Southend we had to cross the river Crouch. To do this there exists a ferry which is a dial a ride type ferry. We had been told that the ferry would be ready to take us to the other side, 10 minutes or so at 07:45. Looking out across at the lovely scene, like people who were shipwrecked we scanned the horizon for the boat...the ferry. Not knowing what the ferry looked like any object that moved on the river was fair game for us suspecting to be the ferry. Many boats came and went and non were the ferry...

The ferryman telephoned Mark who had rung him earlier (there was a noticeboard with the ferryman's number) to inform that we was not far away. When the ferry came in to view it was not a ferry in the sense of a large ferry...it was a small boat. In fact I have been to the seaside and blown up with a foot pump larger vessels! 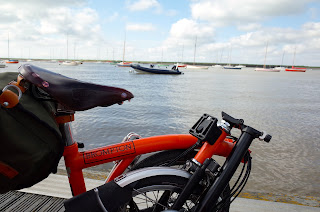 Only able to take six bikes and passengers the we gingerly got on the boat/dingy and made our way to the other side of the river. The view from the boat was was stunning. This area was once a location where oyster harvesting was common. The landscape took me back to Dickens and 'Our Mutual Friend.' 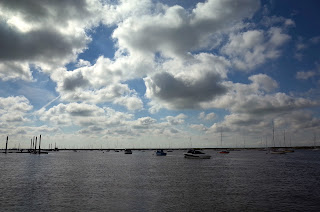 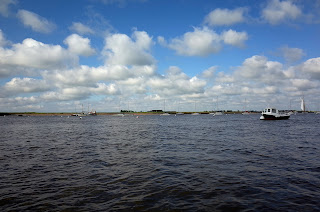 Geoff, who lives in Southend guided us the last 10 or so miles and after travelling through some lovely countryside we reached Southend. While Geoff and David watched our bikes Mark, Anne and I took the train to the end of Southend Pier to experience the Victorian build worlds longest pier at 1.34 miles. 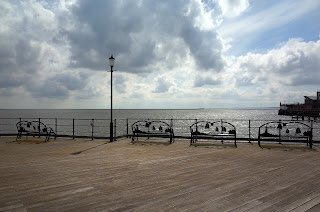 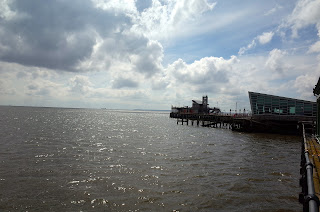 It is a shame that the funds do not exist to restore the pier to its former glory as being well over a mile long it is a stunning piece of engineering and deserves it. 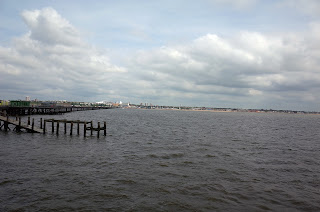 With our return train 20 or so minutes away we retired to the pier cafe and had a cup of coffee. That done we boarded the train and returned to shore. 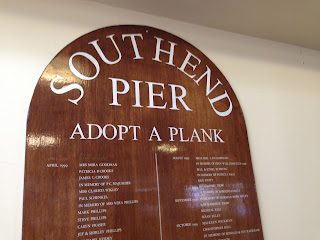 Geoff guided us to the train stations and Mark and I returned with only moments to spare for the train to Liverpool Street. Once back in the big smoke I intended to use the tube to get home but as there was a football match between two German teams, the tube was unusually busy so I decided to head back the 7 or so miles back on my Brompton.

As I type this I don't actually feel that bad at all. I suspect that I will sleep well but the ride did me good and certainly serves to help blow the cobwebs out. There is another ride next Friday and I look forward to that. These rides are good for mind, body and soul and although I cannot articulate it, there is something about a longer night rides that appeal to me.

You can click on the ride data for the various sections of the rides by clicking on the links below.