Last night I had the start of a head cold. Nothing too drastic but it did mean that this morning my eyes were streaming and my voice an octave or two lower than normal, which made Darth Vader impressions for my two children all the better! Despite all this, nothing could prevent me from going to the first, 'Brompton Urban Challenge.'

This was a new event and the premise was that secret challenges would lie in wait for those attending. Cunning, speed, guile and navigational savvy would be required. At least I had the first three sorted as navigation is not my strong point.

I stopped briefly at Smithfield Market where in a few weeks time (if I manage to secure a place, so fingers crossed) I might be racing for dear life in the extremely enjoyable 'IG London Nocturne' Folding Bike Race.


The meet up point was the excellent, 'Look Mum No Hands' on Old Street. I was first there but soon I was joined by my team: Anne, Chris, Tim, iCrazyBee and Azudin. After registering we were given a red envelope and over a cup of coffee and the loveliest Chelsea bun I have ever eaten (make sure you try one of those if you ever pay them a visit) we planned our strategy.

I must point out at this stage that when I say we, I don't really mean me. I liken myself to a lady from a Jane Austen novel who knows little of the ways of the world, let along how to navigate in this world! Besides, I was poorly after all!


The Brompton staff were friendly and helpful as usual, providing further details if needed and answering any questions. With a plan in our minds we headed off outside for a photo opportunity. That done, at 10:35 in the a.m. we set off on the Brompton Urban Challenge! Huzzah!!

It was at this point that a tolerant and very polite member of the Brompton staff pointed out that we could not in fact leave just yet as the event didn't start until 11:00 a.m. and that there was a safety briefing before riders could set off anyway.


At 11:00 in the a.m. we set off with an increased determination, keen as mustard and certainly more keen that we had been at 10:35! With a collective ding of our bells we were off. This was the Brompton Urban Challenge! Huzzah!!!

The first location we decided to go to was Olympia in Kensington. We went there as one of the challenges was to go to the location Brompton won an award. The streets weren't too bad and we headed down Oxford Street and through Hyde Park, making our way ever closer to Olympia.

When I was able to I accelerated away from the pack to get a little training in for keeping up with the roadies when I cycle from Hyde Park Corner to Southend this Friday night / Saturday morning. I only managed a top speed of 25.8 mph unfortunately due to traffic lights or traffic. (And being poorly. Have I already mentioned that)?

Arriving at Olympia we had to cycle round to the front as you can see in the picture below in order to get in the famous sign. That accomplished we headed back to our next destination.

We passed 'Bristol Cars' makers of very fine cars where asking, how much would be plain vulgar! Further along the road we passed one of the few remaining green Taxi cafes. This is were London Black Taxi drivers can go to have a well earned rest, cup of tea and a mean bacon sandwich. If you ever pass one during the week when they are open, if you are polite and go to the serving hatch you can buy said cup of tea and bacon sandwich. You cannot sit inside but you can savour the delights from outside. 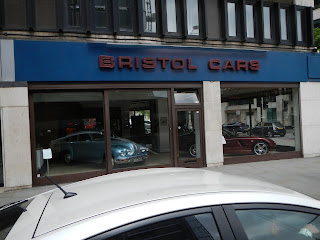 Passing the rear of the Royal Albert Hall we didn't have time to stop. It was a pity we didn't as one of the challenges we were given later on was to get a photograph of our Brompton bikes on the steps of an iconic building.


The Garmin 810, which is sadly going to be returned to Garmin at the ned of the month was its usual brilliant self. All the important data is there as you need it. Look out for my full review of this in a few weeks time.


The next target location was the Brompton Oratory. This is a famed location for all Brompton owners as it was from a nearby flat that overlooked the Oratory that inventor Andrew Richie gave the Brompton moniker to his new bike. The rest is as they say history. 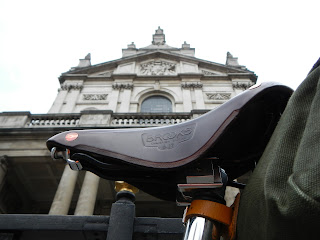 While at the Oratory one of our challenges was to make our bikes into a famous landmark. Seeing the star on the ground we quickly positioned our bicycles, much to the bemusement of tourists, into a vaguely star shape. Standing on the wall we look a photo. 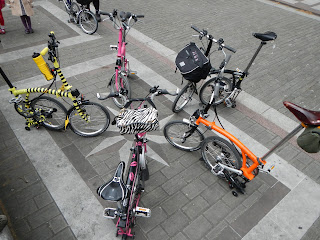 With the many Boris Bikes in a line I could not resist another photo of my Original Orange Brompton in line with them. This was one of the first photos I took when I was out on my then new bicycle. 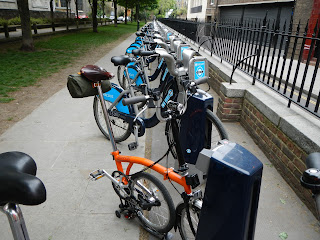 Another challenge was finding a shop with a Royal Warrant. Harrods would have been good for this a few years ago but the Royal Warrants have now gone.

In Knightsbridge we passed the block of flats that cost an arm and a leg...a very big arm and even bigger leg. I must say though that I am not really a fan and it is hardly iconic. We also crossed off another challenge by photographing our Brompton bikes outside the tube station that has six consecutive consonants - Knightsbridge. (Bet you go and count them now).

Heading towards Hyde Park Corner I was again treated to open roads and could cycle off in to the distance. It is strange to think that this Friday at 23:30 I will be going to this very location, with a nervous excitement on a London to Southend sojourn! 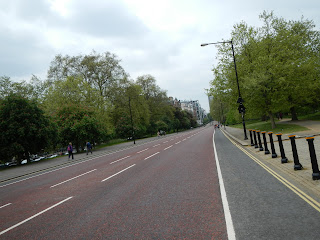 The sight of Buckingham Place is always a hot spot for tourists but they also had the sight of a Brompton peloton in all its glory. 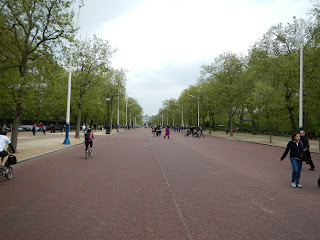 Passing under Admiralty Arch, a Grade I listed building completed in 1912 we made our way to Adam Street to location of another challenge. Admiralty Arch was commissioned by Edward VII in memory of his mother, Queen Victoria.

If you ever pay a visit to the area see if you can spot the 'nose' that was placed there by artist Rick Buckley in 1997. A popular but inaccurate urban myth is that the nose was there to honour the Duke of Wellington!


Passing Charring Cross Station and heading along the Strand we passed the large stone copy of Eleanor's Cross. These were originally wooden and later stone monuments that King Edward I had built between 1291 and 1294 to mark the nightly resting place of his dead Queen on the route to London. Quite touching really.

At Adam Street we found the English Heritage Blue Plaque marking the spot of a famous inventor, in this case Sir Richard Arkwright. 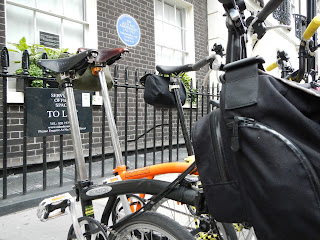 Our second checkpoint was Lincoln's Inn Fields, the largest public square in London. It was there that we were given another envelope with another set of challenges and also where we were joined by Femi (who has the sense to own an orange Brompton).

While there were had to test our skill on a track stand challenge. Several start point were marked out in chalk and the slowest to the line about 10 metres away was the winner - the slowest time for the team winning. Wanting to practice I gestured to iCrazyBee to go first...

He started off with great skill, feathering the pedals and not moving far. There was then the most spectacular elbow over...well you can fill in the blanks which resulted in him crashing to the floor, bike and all. I suggested that marks should be awarded for artistic impression but sadly it was not to be. Luckily he was not injured, apart from a momentary denting of pride perhaps?

Heading back along Theatre land we stopped at the famous 'James Smith & Sons' an umbrella shop located in New Oxford Street since 1857! We went there as I thought they must have a Royal Warrant. We couldn't find any indication that they had one from the shop front, but decided to take a picture anyway.


Getting close to 14:00 we made one last push toward the steps of St Paul's Cathedral which would be for us our last challenge. On the way we passed Christ Church Greyfriars. This location during lunchtime is a popular haunt of office workers, sitting eating their lunch and perhaps wishing they didn't have to return to the office.

What they don't know is that they are sitting near the burial site of a Queen Consort of England - Isabella of France. It is said that Isabella,  the wife of Edward II had an affair with Roger Mortimer. The two agreed to get rid of Edward II but knowing the body of a King would be very closely examined, they hatched a devious plan. Although perhaps an urban myth, they apparently arranged the murder of the King by thrusting a red hot poker...well I am sure you can guess where?!


Our last group photo one the steps of St Paul's done we headed back to 'Look Mum No Hands' as food was going to be served from 14:00.

At 'Look Mum No Hands' participants of the Brompton Urban Challenge were given a ticket allowing them to have a free drink and meal. I chose to have a rather fine sausage roll, with chutney and salad. It was lovely! If you get a chance definitely pay them a visit!

I said my goodbyes to my fellow team mates and returned home. It was a great day out and a thoroughly enjoyable event. My team mates were great company and I hope to see them on rides in the not too distant future.

Hopefully Brompton will refine and put this event on again in the future. Yet again it was another very well organised Brompton event, with lots of members of staff giving up their Sunday to make it happen. I suspect there was a great deal of planning that went into this and Brompton really does need to be commended...yet again!

Brompton seems to be going from strength to strength. Events like this are great for Brompton and shows that their...our bicycles aren't just a commuter hack. They are much more. Do Brompton have to do this? Possibly not, however I am glad they do. What other manufacturer does anything like this? Answers in the comments section...but I doubt there will be many!

The ride data and maps can be viewed by clicking on the link below.
Brompton Urban Challenge Ride Data and Maps 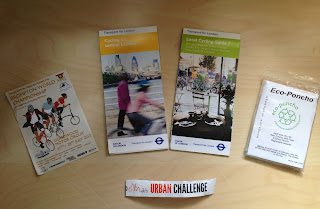