Dover Castle with My Ricoh GR

Today we decided to head out of the big smoke and go somewhere we had not been before. The location was decided upon the previous evening and at just after 09:00 we headed off to Kent to pay a visit to Dover Castle.

Dover Castle is very impressive. It is the largest castle in England, a Grade 1 listed building and  'Scheduled Monument' status meaning that is an internationally important building.

Founded in the 12th Century is has been described as being key to England due to its defensive importance over time - Napoleonic Wars and Second World War - the latter being its finest hour perhaps.

I decided to take my new Ricoh GR but as it was so busy and I had an excited couple of children and wife to contend with, I didn't have that opportunity to consider my settings or composition, so the photos below are rough to say the least. 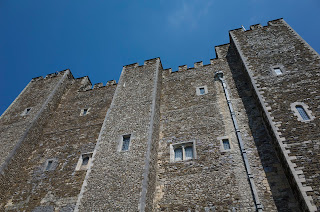 There are some great view to be had and there are many vantage points throughout the castle grounds. It would be true to say that you would be hard pressed to see everything in one day - there is that much.

The whole of the Bank Holiday weekend was a special WWII event with lots of people dressed up as German soldiers and a few British soldiers.  I was rather disappointed not to see any people dressed as American soldiers as I have always liked the uniforms.

Strangely, almost all the people there dressed up in costume were in German outfits. I was told by a charming American tourist from Ohio that that is usually the way. He went on to say that in America most people that like to dress up as Civil War soldiers usually choose the Confederate side. (Is this true American readers out there)? 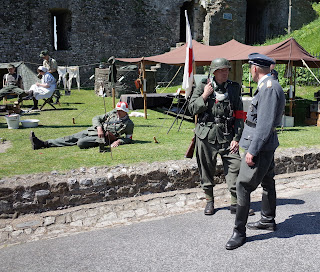 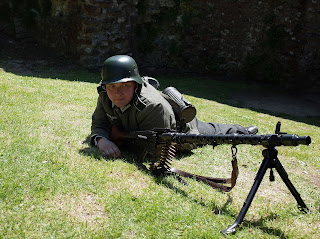 It is strange to think that France is but a step away from Dover, 22 miles in fact. On a clear day you can see across to our French neighbours.

Dover Castle was a great day out and I suspect we will be back again at some point. There is so much we didn't see and we didn't really scratch the surface.