London to Whitstable - 66+ miles on a Brompton

Friday had been a busy day. I ventured to the top of Tower 42, returned home to go to the zoo with my family and then headed off to Charring Cross to meet my other fellow Bromptonians Mark and Geoff.

On my way to Charring Cross I had an incident with one of the many rickshaws that seem to be in abundance on Oxford Street. As one attempted to turn right it scraped a car behind me, then my leg and then the car in front! No serious damage done but I have a small cut and bruise. The driver of the car in front got out and laid in to the driver of the rickshaw and I just carried on my way.

Meeting my fellow Bromptonains we headed off for our usual meet point for the Friday night rides, Hyde Park Corner. Once there we excitedly waited for the big off and were joined by the last Bromptonian, Guy.


At midnight we were off. I pressed start on my Garmin 200 (as the Garmin Edge 810 has now sadly been returned to Garmin). Sadly and for reasons unknown my Garmin 200 seemed to record the entire ride as per normal and I recall looking at the ride history and seeing the stats. However when I was on the train home looking back at the ride, it wouldn't open at all? When I got home and tried loading it up alas it said there was an error. Shame really as the 200 has not done this before?

Friday night/Saturday morning was much warmer than the same time last week. This time I travelled light and didn't even need that many layers. As I intended I took my Titanium Orange Brompton with me. Just before the before the big off and safety talk we lined out Brompton bikes up into the traffic light formation. This was something we did at every opportunity for the rest of the ride. 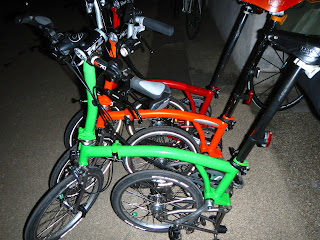 As we headed out there was the usual sound of people clicking in to and out of their cleats when staring / stopping. I don't think I have written about this before but it is quite a nice sound almost musical in a percussive kind of way.

Getting out of London was again great fun and passing Buckingham Palace we headed off for another nocturnal adventure. As for the many previous nocturnal rides I have been on it is quite surprising how busy London is at night. London is marching ever closer to being a true 24 hour city. 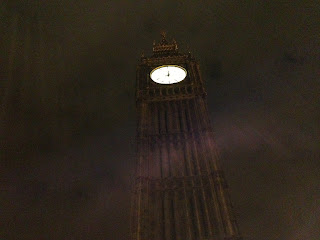 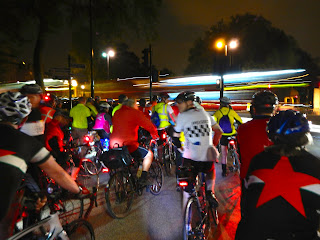 We reached Greenwich in less than an hour and saw the Cutty Sark and Greenwich foot tunnel home into to view. Memories of many Greenwich adventures sprung into mind and I made a mental note to mention to Mark that we really should have another one. (The Greenwich rides are among my favourites).

Heading further east we reached Gravesend. Across the river Thames we could just make out the many industrial buildings that dominate this part of the Thames. Huge cruise ships were moored at Tilbury Docks and even in the night time gloom there was a buzz...atmosphere to the place. 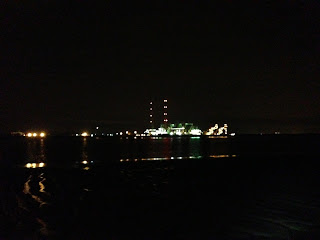 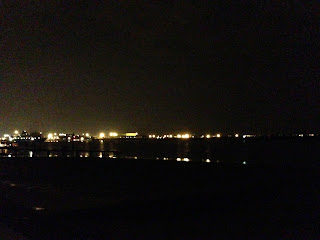 Our halfway point was at the English Martyrs Church in Strood at about 34 miles. We eventually cycled along an off-road section that for me was on of the highlights of the entire ride. As we cycled along there was a canal or drainage ditch - not overly sure - on our right. The sound of Marsh Frogs filled the air and made a wonderful sound and quite a loud one at that. Marsh Frogs aren't actually British and were introduced to this country in the 1930's. (I know all this as they also have them at the London Wetlands Centre and the sound is a very familiar one).

At 02:53 we were stopped and told to look up to the heavens. We had been told during the pre-ride briefing that the International Space Station would be visible at around that time. At 02:53 we all looked up. The clouds parted to reveal a good number of stars. I was not sure of what to look for and didn't quite believe that one could see said Station but an excited shout came out from behind, 'look there!' To my amazement I saw what looked like a bright star fly across the sky at some considerable speed and certainly faster than a plane and in to the distance. Quite amazing!!

I have not really had much luck with astronomy over the years. I recall watching the late Sir Patrick Moore on the 'Sky at Night' informing that a comet would be visible in the might sky at a particular time. I remember it being a school holiday and convincing my mum and dad to allow me to go out into our back garden to await this astronomical phenomenon. I have vidid memories of going out armed with a torch, binoculars, thermos flash and sandwiches. Despite my best efforts I did not see the comet but a Heron flying low over our garden startled me and before realising it was a Heron I took it for a UFO and ran swiftly back inside, much to the amusement of my dad! 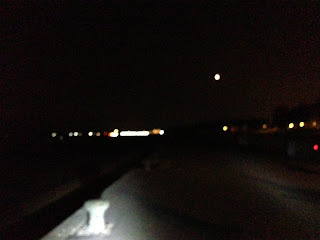 At about 34 miles we reached our big rest stop. There we had some lovely refreshments and I must say all these people that give up their time to do this are very good. With refreshments over we headed off again as the sun made it clear its intentions to rise sometime quite soon.

As we entered the outskirts of Rochester I could see the famous castle high up on the hill where it has done so since the year after the Battle of Hastings in 1066. It is incredibly well preserved and is a fine example of Norman architecture. (I must pay it a visit with the family one day).

With the sun rising the surrounding countryside was illuminated. It was quite beautiful. Many orchards lined our way forward and the Garden of England was certainly living up to its moniker. 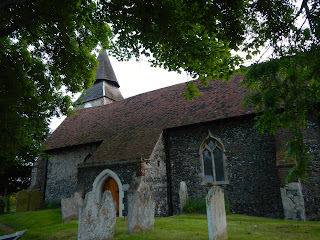 The pace was brisk and felt faster than all the other Friday night rides I had been on. This suited me and I enjoyed it greatly. I did see from my Garmin that my average speed was saying 13.01 mph 2/3 in to the ride but I have to report that I suspect my poor little Edge 200 is on its way out as it wouldn't work today either. Mark said that his average was 12.8 mph so I would say his figures are more accurate. 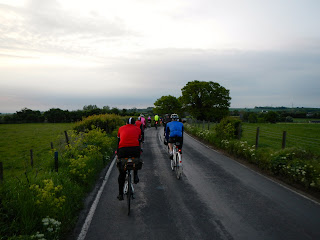 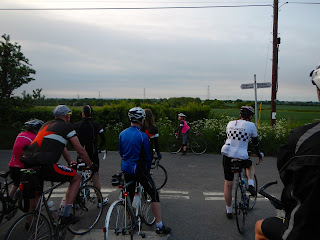 The villages we passed through all looked rather lovely with many of the building being very old. Again it would be nice to pay some of these locations again at some point. 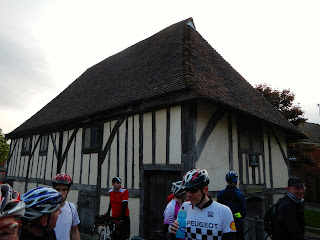 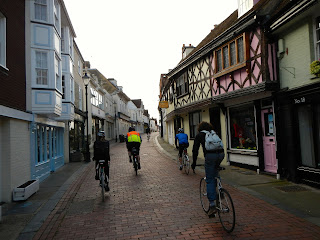 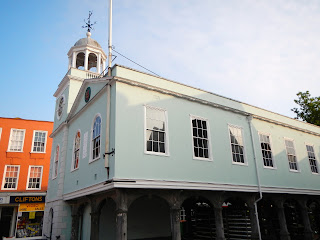 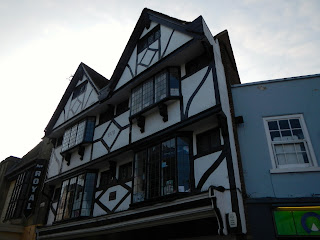 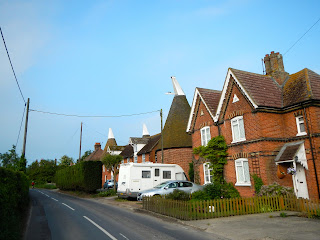 Passing along country lanes at this time of the morning meant that one could hear the dawn chorus in all its glory. I saw Wrens, Robins, Yellowhammers and when passing anywhere with water and reeds, Sedge and Reed Warblers. 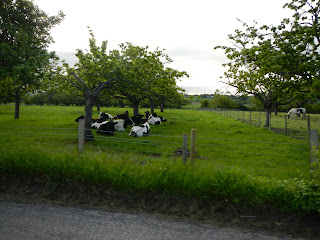 At just over 66 miles we reached Whitstable. The weather had turned slightly and cloud cover and a strong wind was noticeable. Santury came in the form of the 'Waterfront' pub which served a pretty mean full English. After breakfast we said our goodbyes to Guy who wanted to get the earlier train back to London. Mark, Geoff and I decided to get the 09:39 which meant that we would have time for a few photo opportunities. We also said our goodbyes to the gentleman that is Simon who organises these rides so well. 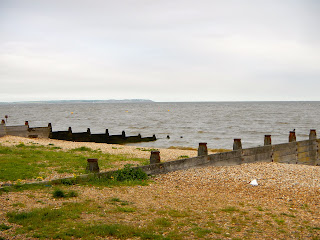 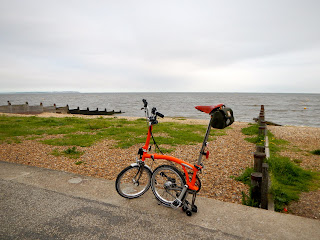 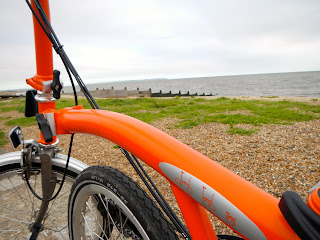 Once breakfast was over the weather seemed to perk up a little and the clouds were blown over to make way for the sun to shine through. 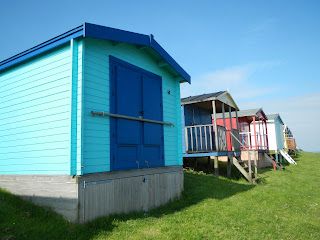 The seafront is dominated by lots of small beach huts. Most are brightly coloured and those facing the sea have a wonderful view. This view comes at a price as I am told that when they rarely come on to the market some can fetch over £30,000! 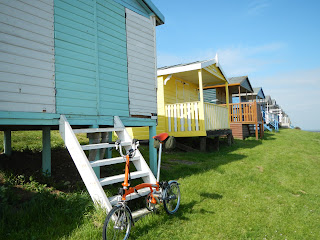 Of course we had to reproduce our Brompton traffic light pose and I suspect that when we are next on a ride we will be doing the same again! 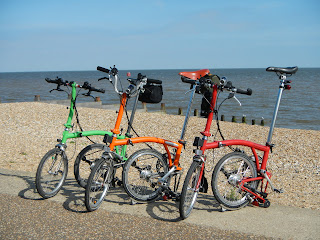 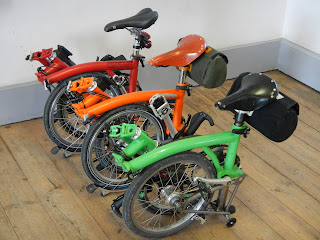 We boarded the train at Whitstable to take the one stop to Faversham. We did this as at Faversham there awaited a Javelin train that was the fast train back to St Pancras. This train was certainly fast. Just for fun I turned my Garmin Edge 200 on and was able to record a small section of the journey where it topped 134 mph. Data and maps for that below.

I said goodbye to Mark and Geoff as they got off before me and at St Pancras I got off and cycled the remaining 8 miles.

This was a brilliant ride! The company was good as were the views. The off track section was great and seeing the International Space Station was a bonus. This was a brisk pace and provided a good final big training run for the Nocturne and Nightrider next week!

My little Titanium Orange Brompton and that of my fellow Bromptonians were able to keep up with it larger wheeled cousins. In fact we were in the tops third of the pack for most of the ride. One man on his first Friday ride was amazed that we were attempting it on Brompton bikes. I suspect he had a different view as a blaze of different colours whizzed past him and more than kept up with him.

As I type this entry I do not feel any worse for wear. A good nights sleep and a hot bath seem to do wonders. Again I find myself reflecting on this ride and again I come to the same conclusion. There is something about these night rides that are good for the mind, body and soul. They are not something I would care to do every week but now and again they are a great deal of fun. If you don't believe me why not have a go yourself. As I wrote before it doesn't have to be as far or as fast. Cycling near to where you live might give you a taste. Give it a try. What's the worse that can happen?