A Day at Bletchley Park with my Ricoh GR

At the weekend I took the family to a particular favourite location of ours - Bletchley Park. For those of you who are not aware during WWII Bletchley Park was know as 'Station X' and was ultra top secret. It was here that the many code breakers attempted and were eventually successful in cracking the 'Enigma' code.

The Germans used the Enigma machines on U-boats to send coded messages. Churchill apparently said that the only thing he feared during WWII was the U-boat threat. Breaking the code was vital and the code breakers worked tirelessly to do so.

Alan Turning the genius mathematician inventing a machine of his own called the 'Turing Bombe' that had rotors that spun around continuously trying to decipher intercepted codes. This together with the team of code breakers managed to do just that and the Germans lost the war thinking that their Enigma codes were unbreakable.

Bletchley Park was so top secret that until a few years ago no one had really heard of it or the great Alan Turing. It was only with the threat of Bletchley Park being laid to the ground for developers to build housing that those who worked there during WWII broke their silence. Now it is a museum and the quite incredible work many people did there can be recognised and celebrated. Many have estimated that the work the code breakers did at Bletchley cut two to three years off WWII and saved millions of lives.


There is a huge amount to see at Bletchley and I took my Ricoh GR to take a few photos where obtaining bokeh was the order of the day.

Inside one of the bike sheds there several rusting bikes, many with Brook saddles on them. 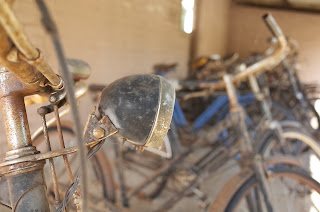 Bletchley Park is about 50 minutes drive from London and it has an overground station 5 minutes away. Admission entitles you to an annual ticket and as such you can visit there as many times as you like during the year. A family ticket costs £34, adults £15 and under 12's go free. The great thing about Bletchley is that there are lots of special events during the year which you can go to. 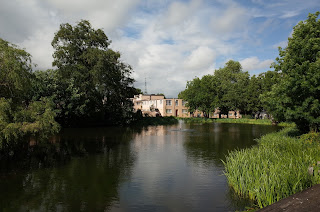 I am really enjoying playing around with my new Ricoh GR. It is so small and light weight that carrying it around if effortless. I am also very pleased with the results so far. The level of detail is very good and the lens is very sharp. At f2.8 isolating objects and achieving bokeh is quite easy. I thought nothing would be as enjoyable as the Ricoh GRD IV but this new GR is better!

The link to the Bletchley Park website can be found below.