I'm not alone in my like of the colour Orange!

The other day I had to go multi modal and us emu car for part of my journey. With my Brompton the boot I stopped briefly at McDonalds in order to get a cup of tea to break up a long journey. In the car park space near mine I saw an orange bike not the pedalling type but a Kawaski Ninja Superbike.

I got out of my car and asked the owner if I was allowed to take a photo of it. He was only too happy and after taking the first photo I told him that things were going to get worse as I started to open the boot. I got out my Brompton but as I was doing go the owner of the motorbike said, "I don't believe it. It's an orange Brompton!" It was good that he instantly recognised the brand we are so fond of.

With my photo taken we joked about would be able to go the fastest. We both agreed that mine was the better mode of transport as I could take my Brompton almost anywhere. 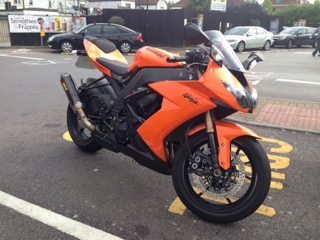 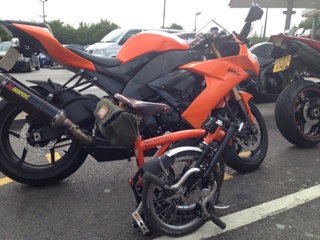 When I drove away to continue my journey my mind wandered off to the last time I was ever on a motorbike. It was the early 90's and I was an undergraduate. I locked my Brompton to the railings at Hanover Square. (I had a Brompton back then but like a fool sold it).  After a night out I said my goodbyes to a friend who had parked his motorbike near Marble Arch. It was also a  Kawaski, the one that Tom Cruise used in the film, 'Top Gun.' He offered a lift to where my Brompton was locked up. (strange that back then I used to do that all the time. No way I'd lock and leave my Brompton bikes now).

I got on the bike and very reluctantly put on the spare helmet. Back then, to my shame I didn't wear a cycle helmet and was worried about suffering helmet hair. However, being a legal requirement I conformed. My so called friend told me to hang on...

I did but the acceleration was so rapid, so violent that I could not suppress a scream. I am not ashamed to say that I wailed like a banshee on a journey that seemed to take less than 5 seconds. In addition to this I held on so tightly that onlookers would have thought we were a young couple. I shouted out STOP!

Arriving at Oxford Circus I got off the bike, told my friend he was an arse, handed him his crash helmet and sulked off to Hanover Square. To this very day I have not and will not have anything to do with motorbikes!
at June 21, 2013