Last year my riding partner iCrazyBee and I went on one of our first ever all night rides which was the first Velonotte. On that occasion it quite literally poured down for the entire ride. It was an experience to say the least but it perhaps gave us a taste of the wonders of nocturnal cycling in London.

Late last night and throughout the early hour of this morning we again embarked on the second Velonotte. This time we were joined by two other Bromptonians - Chris and Oliver. We were periodically joined by Roger (veteran of all Nocturne races) who was performing Marshalling duties.    Our meet point was Piccadilly Circus at 23:00. Once assembled we chewed the fat for a while before making the short journey to Buckingham Palace which marked the official meeting point for the Velonotte Albertina.

The Velonotte Albertina was the brainchild of Sergey Nikitin who is the founder of this enjoyable concept. With a Victorian theme riders were encouraged to dress appropriately in Victorian costume -which many did. The idea is that participants will cycle to various locations where they listened to a simultaneous broadcast on 104.4 FM radio. Experts talked about the architecture and some of the great and good associated with these locations/buildings. It was all very interesting stuff. 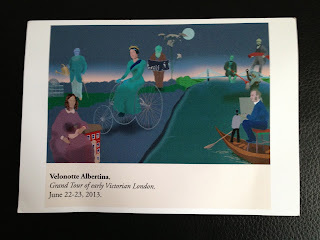 As midnight approached it was not long before the simultaneous broadcast began. Shortly after midnight we switched on our lights and were off to our first location. 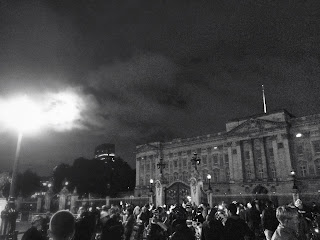 As we cycled down The Mall we saw dozens of lorries and transporters unloading lots of very expensive cars. Some were F1 cars. As hordes of cyclists weaved in and out of the cars being unloaded security guards looked on nervously. One even asked politely if we could be careful as the cars cost lots of money.

Apparently all these exotic cars where going to be used in filming a forthcoming episode of BBC's 'Top Gear.' Didn't see James May but would have been nice if he had of seen all the Brompton bicycles go by.


The first stop was Charring Cross Station. The focus being the station, the early underground and Eleanor's Cross situated outside the station. I have mentioned this before in my blog and to find out more about it please click here.

Outside Charring Cross past midnight is certainly lively. As on previous night rides this location in particular is a conduit for those either starting their night out or those about to return home. An ambulance was parked in the taxi rank with a middle aged lady sitting in said ambulance. Not too long after this the same lady was being marched to a nearby police van by two police officers. She must have either made a remarkable recovery or was not injured/ill as she was resisting quite well and using language that would have made a docker blush.

Our ride continued and we arrived at the University of London's Senate House. This is a lovely art deco building that is a particular favourite of mine. We listened to some very interesting commentary about the university before moving on.

The weather was not as bad as last year. There was only light rain on a few occasions but the moderate winds made made things chilly for this time of year. When will summer truly arrive in the UK?? 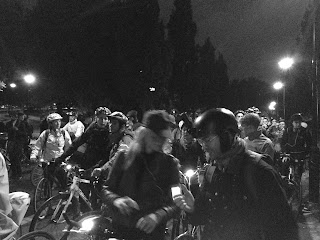 Travelling along the Grand Union Canal with so many cyclists was distinctly dicey. Regular readers will know that I have a particular dislike of cycling along stretches of waster so I negotiated the sometimes narrow towpath with caution!

As we cycled along memories flooded back of the Whitstable Friday night ride where we cycled along a long stretch of water. I write this as cycling along I fancied I could hear the distinctive sound of Marsh Frogs calling in the distance.

At Ladbrook Grove we reached the outside entrance of Kensal Green Cemetery. In my opinion it is one of the finest Victorian cemeteries in London if not the finest. I have written about this location at length and you can see my previous blog entries by clicking here, here and here. Pay it a visit if you are able. 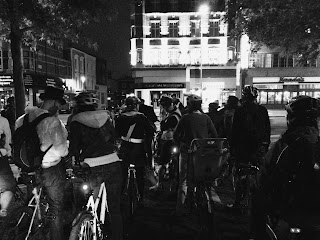 At about 03:30 we arrived at a rest point the name of which alludes me. I know that it was a nightclub but thankfully most of the clientele had left and the club - with an extended licence - hosted all the cyclists taking part in the Velonotte.


Shortly after 04:00 with dawn on its way and various birds starting to sing we headed off again. At this point Chris said her goodbyes and not too long after that so did iCrazyBee and I.


Together we cycled along Park Lane passing a lady sitting at a bus stop with her boyfriend perhaps sobbing and wailing. Not that much further along we passed another bus stop where a 40 something was doing the same while his friend drank from a bottle. Crossing at Marble Arch I caught a glimpse of a man lying in the road with paramedics surrounding him and a dented van, stationery with hazard lights on. I write glimpse as I cannot bare to look at such things. I suspect this poor chap was drunk and wandered into the path of an oncoming van. I have written before that I have lived a sheltered life but there was much more to come. More of that later.

We knew that the only place that would be open was McDonalds near Charring Cross. Unfortunately when we got there we could see that there was an incident taking place outside and not wanting to get too close we headed back to Tottenham Court Road where we had passed one that opened at 05:00.

As we waited we were joined by more and more people. All apart from iCrazyBee and myself were worse for wear. many were plain half cut! I am the sort of chap who gets on with everyone from all walks of life but I felt as if there might be little in the way of common ground between us. I suspect no one bothered us as we were standing there with folding up Brompton bicycles and colour coordinated jackets. Perhaps they thought the same about us I thought about them?

The seating area was totally shut, perhaps as they didn't want people sleeping there - as believe me some might have. With food ordered we took it to a quiet spot and ate. As I finished the last of my coffee a homeless lady carrying two filled carrier bags in each hand appeared from nowhere. I actually smelt her before I saw her and from the fumes I inhaled I worried about whether it would be safe for me to cycle home? There then followed a brief conversation that confirmed I have indeed lived a sheltered life...

This lady looked me in the eye and asked if I would like to take her to bed as soon as possible! (I have of course changed the wording on this. She was much more graphic in her choice of language)! With a quickness of wit I did not know I possessed I said that I was very tired after a night of cycling but Mitul (the Mcdonald's staff member who served me) would only be too happy to fulfil her request. I pointing in his general direction.

She proceeded to walk purposefully in the direction of the poor unsuspecting Mitul, taking no notice of the lenghty line of people waiting to be served by him (not in that way). For a few moments I felt slightly guilty but I did not stick around long enough to see how things panned out.

I said my goodbyes to my cycling partner iCrazyBee (who being a London Bus Driver for many years who has seen it all and probably amused me saying I have lived a sheltered life).

The Velonotte was a great little ride. The locations were great and it was good to see lots of cyclists from all walks of life participating. The organisers did a very good job and Sergey put together a great event. Below you can click on the link to view the map and ride data recorded by my Garmin Edge 510.