Friday night was meant to be London to Cambridge overnight but for me I ended up going as far as Bishops Stortford.

The meeting point was the usual one near the London Eye and I made my way there in good time. The ever increasing number of people out and about has increased since the last time I had been this was - a good thing - and it gave a sense that some sense of normality was returning.

At the start point there were the familiar faces of Dr John, Charlie, Ross, Stuart and again the very welcome return of Geoff. 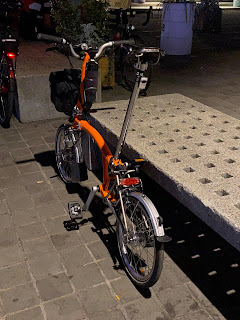 After the safety talk we got ourselves ready and almost on the stroke of midnight we were off into the night. 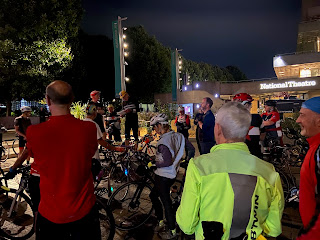 Sadly we didn't get too far. In fact is was about a third of the way across Blackfriars Bridge as some poor unfortunate had suffered a puncture. 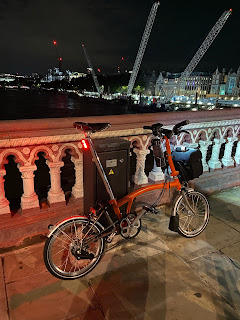 I wasted little time using it as a photo opportunity and took a few snaps to remind me that I had come this way as it were. Once we heard the call of 'all up' we were off again. 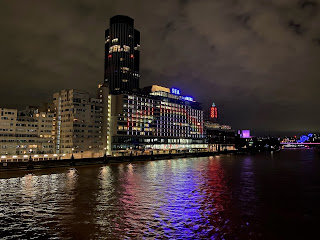 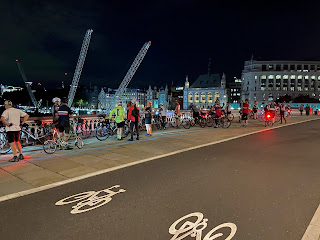 Our route out of London pretty much followed that of the Dunwich Dynamo as far as Epping. I was rather pleased to get through central Hackney and when we reached the blue bridge that sort of marks the official start point of the Dynamo, I had to stop for a photo. 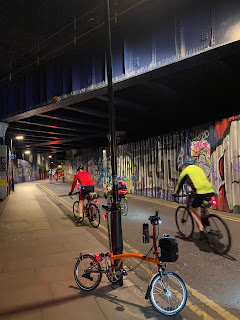 The Dynamo route out of London isn't my favourite I have to admit as I have always found it rather busy. This night was no exception. Once we got further and further out, things did start to get better but then disaster struck. 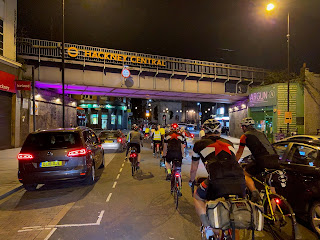 Ahead I could see that riders had stopped and it initially looked as if they had stopped to regroup so that everyone could join a cycle path running adjacent to the road. Parking my bike I was about to take some water when I stopped the reason why we had stopped. Sadly, when trying to join what was a slightly raised part of the cycle path a rider has clipped it and fallen.
Just to say straight away, he was okay. I am sure that he will have some sore bits but he was fine. He was at first almost motionless and was out of it I gather for a few minutes. He had hit the deck pretty hard and had some cuts to his face and arms. At that point I knew that for me the ride was over.
I am not squeamish and in my time have had to deal with all sorts. However, few years ago when riding with a friend, they were knocked off their bike when a car overtook and turned left suddenly, with the result their leg was badly broken. At the time I did everything I could until help arrived but since then I have had a thing about bike accidents involving others. This was the main reason I knew that the love for this ride had gone. Definitely something I need to work on and get over!!
I considered heading back to London from that point but decided to get to the halfway stop. A secondary reason and not really as important, was that I knew I'd reach Cambridge later that I would have liked, resulting in me getting back to the big smoke later than I needed. 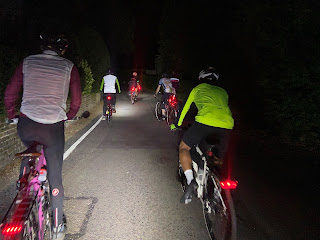 The miles to the halfway stop at the services at Bishop Stortford were on quieter and more pleasurable country lanes. At the services we had some sanctuary. I ate a sandwich that I had brought with me and said my goodbyes as the others left. I had a quick chat with Nick (who had been the ride leader out of London and as far as Epping and was also calling it a day) and then made my way to the station. I got the 06:07 train to Liverpool Street that took about 40 minutes and by about 07:15,  I was back home. In all I only cycled 45 miles instead of 66 miles.
Many thanks to the ride leaders Nick and Claire and to the people who attended the poor chap who took a tumble.