Last Sunday saw me attend a day ride with people I normally see on a night ride. This was a Monopoly board themed ride. I haven't done one of these for years and as the gentleman that is Ross was leading, it was almost certainly going to be a great route and lots of fun. 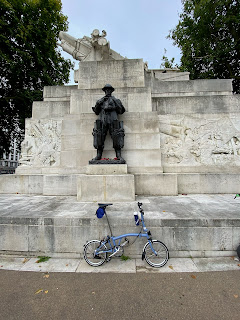 The meeting point was the usual Hyde Park Corner and I decided to take my new Cloud Blue with me -  which is starting to clock up some miles. 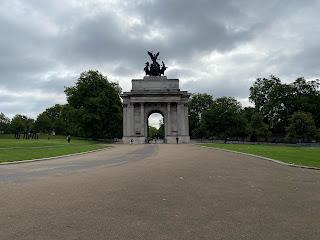 There were lots of familiar  faces and some new ones and as we waited for the last few people to arrive we were treated to members of (I think) the Household Cavalry to go past rather majestically. 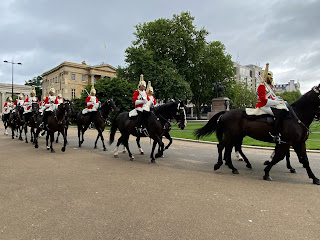 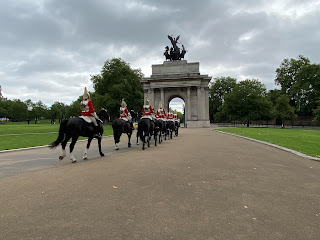 I was rather pleased when I thought I saw Geoff in the distance and when he came closer and this was confirmed I was even happier!! This was great! I had not seen Geoff for ages, perhaps getting on for two years - far too long - due to the C word I suppose. Within a few moments it was as if the many months had been nothing and at 09:45 we were off for our first board position of the day. 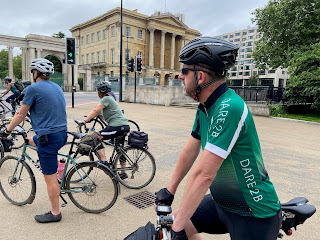 Almost as soon as we left Hyde Park Corner we cycled on Park Lane which is within Mayfair. This street and the Mayfair in general is a rather expensive part of London. There are lots of very expensive hotels, shops, houses, flats and eateries.
Despite my childhood and teenage haunts being firmly in SW7 and NW8 it is a location that am rather fond of as many of the characters by P G Wodehouse - who I almost regard as people I know - knocked around here. I can remember walking around Mayfair a few times with the late Lieutenant Colonel Norman Murphy who did walks taking you to locations that were the basis for those used by P G Wodehouse in his stories.
As we neared the top of Park Lane we saw the Marble Arch Mound come into view. I personally couldn't see the point of it when I first heard about it and it seems I am not alone. 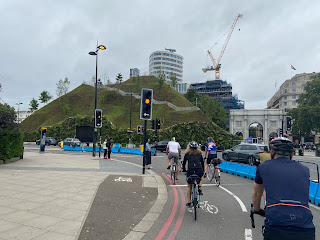 Next on the list was the first of the stations, Marylebone. This also featured in my Beatles ride.
Bond Street was next and on the way to it on Brook Street was the strange sight of two houses where George Frederic Handel once lived/died in and next door where Jimi Hendrix once lived. Separated by time, imagine the possibilities if they had of ever met! Soon after that was Oxford Street and following on from it Regents Street. 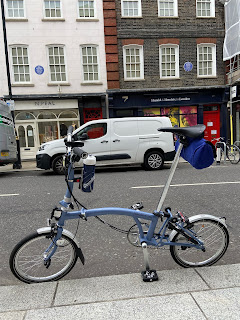 Poor old Vine Street was a bit of a letdown if honest. If used to have a Police Station and be longer but both of these no longer apply. 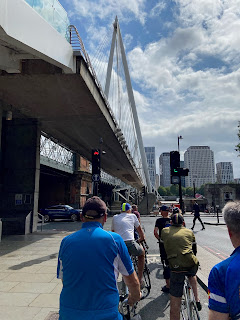 Whitehall is where lots of government buildings are located. Behind us as we looked out on to Whitehall was Banqueting House. It was here in 1649 that Charles I stepped out of a first floor window to a scaffold for his execution. 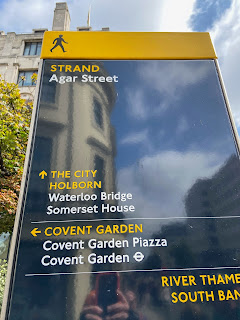 Strand is often called, The Strand quite possibly due to the old song of 1910, 'Let's all go down the Strand' which believe me was playing in my head as I cycled along it! 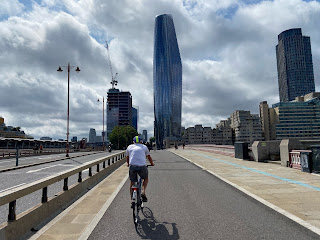 A portion of wall is all that remains of the infamous Marshalsea Prison. It became well know through the writings of Charles Dickens. His own father was sent there when he was12 in 1824 for a debt to all people, a baker. 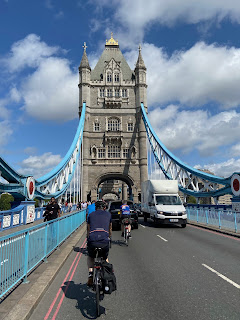 Whitechapel is usually associated with the 11 murders some of which were attributed to Jack the Ripper. It was also the location where Joseph Merrick - The Elephant Man - was exhibited in a shop but later given rooms at the Royal London Hospital, ironically opposite it! 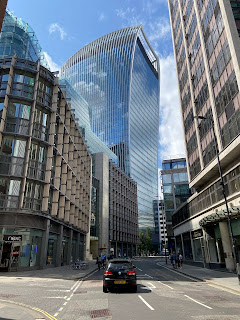 With Euston Road in sight we had pretty much done the lot and the ride ended up at Russell Square. Some queued up for some refreshments but after I had said my goodbyes to Geoff and thanks to Ross I headed off.
As always a lovely ride in London. Many thanks again to Ross for leading and making it all so interesting.
Until next time, stay safe people!
at August 18, 2021