A few weeks ago on a ride (I cannot remember which) I recall Jenny (The Mile Monster) telling me about a little celebration for the London Brompton Club that had reached its 9th birthday. With a date set for Friday, 6th August I made sure that it was firmly in my diary.

I set off from Maida Vale towards the meeting point at Buckingham Palace with the clouds looking rather ominous to say the least! I stopped to put on my rain jacket and proceeded all of 100 metres when a roll of thunder and a crash of lightning erupted that could have come straight out of a 'Hammer Horror' film with Peter Cushing and Christopher Lee. I took sanctuary in the entrance to some posh flats along with a few pedestrians who joined me. The rain poured down and when it eased off I was about to head off again when, almost on cue, it came down again even heavier than before. After a few more minutes I headed off into lighter rain. 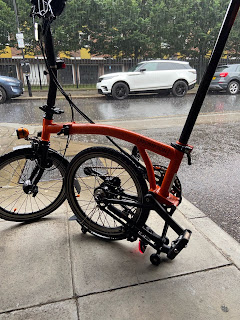 As I knew I would be a little early for the meeting time of 17:00 I decided to head towards Trellick Tower. I have always been a bit of a fan for this building. Opened in 1972 and now a Grade II listed building, it had always stood out for me. 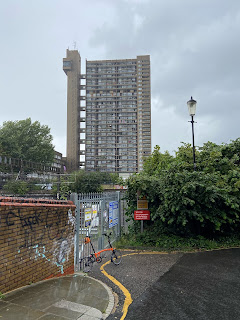 Arriving at Canada Gate I bought a coffee from a nearby kiosk - that was greatly needed - and saw that a few participants had started to arrive. There were some old faces, faces of people I have only met recently and some new ones too. The one thing in common is that we all have a thing for a small folding bicycle that just seems to bring a smile to everyone.
Also in attendance was my partner in crime Andrew. It has been ages...too long since we saw each other and I suppose the C word really didn't help. I could not help but to give him a hug and within moments it was as if the time had disappeared. 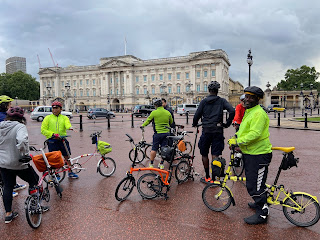 After a group photo and once the gentleman that is, Bob to arrive, we headed off for a slightly shorter ride that would take us to the new location for the Brompton Junction Store in Covent Garden. 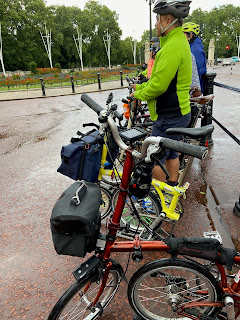 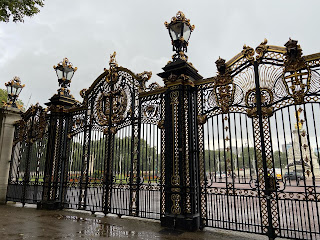 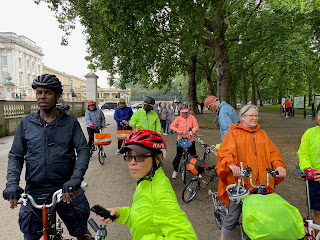 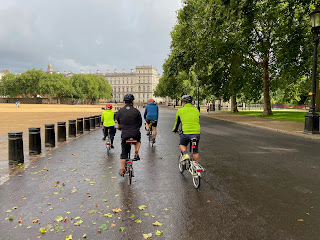 We cycled the short distance with the prospect of rain at any moment - judging by the clouds - but nothing could really dampen the vibe and general feeling. 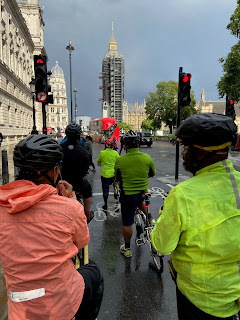 The new location for the Brompton Store at Covent Garden is more or less in the same location that the old one was but is bigger and a few doors down.
Not long after we got there, another rumble of thunder warned of rain which then fell. With that we made our way into the shop. 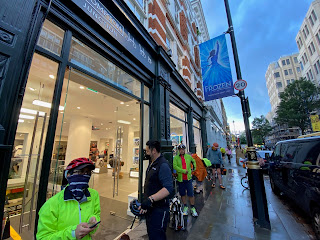 With bikes parked strategically we had a little saunter around the shop which was a big improvement in terms of space. 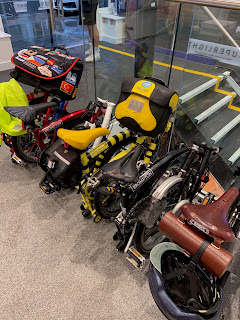 Looking around I could see that there was a fairly good stock of Brompton bikes for sale which was good. I also eyed a couple of Cloud Blue bikes which I again regarded as being just the loveliest colour...next to Orange of course! 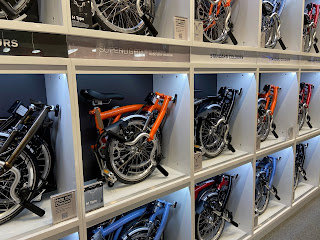 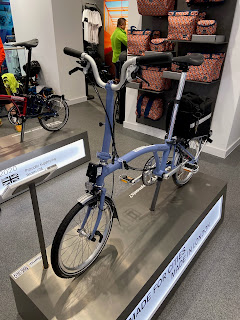 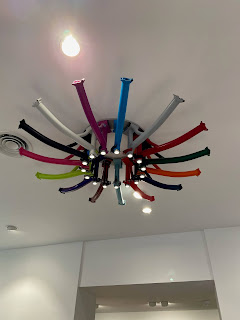 On the wall was an inverted screen that mocked a phone display. On this you could see Instagram posts where Brompton Junction had been tagged. I got Andrew to pose next to one of his and he needed little encouragement. 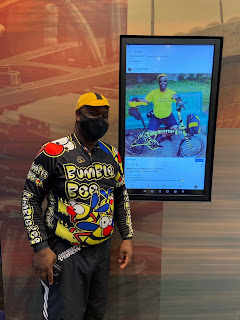 Brompton Junction had bought a cake and a lovely one at that. After a few photos it was taken out of its box. 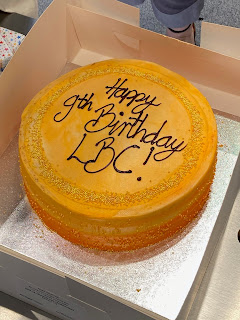 Bob thanked Brompton Junction on our behalf and then gave a brief history of the group that was celebrating nine years. It all began after Andrew and Mick B went on a Brompton maintenance course and Andrew decided to set up a group. Over the years it has grown into what is still a growing group of riders and enthusiasts. Unlike many other Brompton groups - that seem to simply post photos of bikes and parts - this group is one that has regular rides. Over the years we have been on several adventures. The lovely thing is that there will be many more to come. 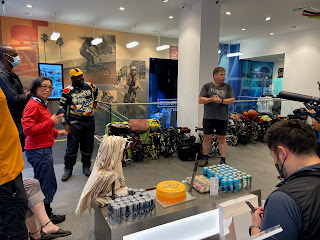 It was only fitting that Andrew had the honour of cutting the cake and after it was cut into slices we all had a piece. It was lovely. 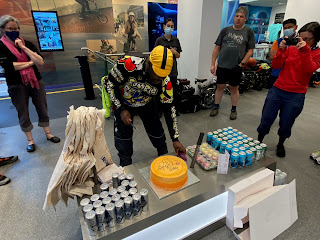 After some goodbyes, I left with a few of the others all going off in our separate directions. It was a lovely way to spend a few hours and great to see everyone. Many thanks to Jenny and Bob for organising and special thanks to the Brompton Junction Staff being such wonderful hosts and allowing this to happen. 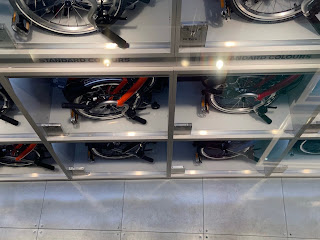 Looking through the glass for to the bikes in the basement
My association with Brompton goes back quite a long way to my university days when I was gifted a Brompton but it was about 10 - 11 years ago that I was able to join a group of like minded lunatics individuals and go on some truly memorable adventures and make some wonderful friendships. I currently own three Brompton bikes and two road bikes. Of these, those with larger wheels are gathering a layer of dust. The Brompton is just too good to be left at home. Here’s to the future and more rides, adventures and friendships in this great little club.
Stay safe out there people!