Saturday, 31st July saw me getting up at an ungodly hour to join Mark (King of the Hill) and a few others at 07:00 am in Trafalgar Square. The plan was to cycle to Otford where we would meet the main group and then cycle on to Whitstable. There were in fact two groups cycling the 26 miles from London. Jenny had a group that started at 06:00!

As I cycled through Hyde Park it was all but deserted. When I passed Albert Court, I could not stop myself from taking a photograph - of my Brompton, not Albert Court. This simple act caused me to be fashionably 5x minutes late.

Once I had arrived we were off. There were four of us - Mark, Simon (veteran of many a Brompton ride), new Simon and myself. Our pace was purposeful but still conversational and it was great to catch up with Mark.

At the top of our ascent at Crystal Palace we picked up two more riders, one of which was James H. He had recently finished the Pan Celtic Ultra Endurance Race - on a Brompton. In addition he had just done the Dunwich Dynamo and cycled back again! 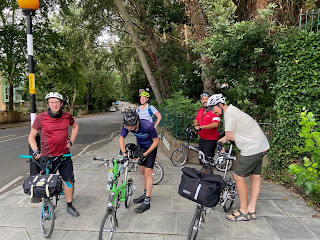 In the photo below the last time we completed this ride the way was blocked by some fly tipping and we all had to climb over. This time all was good. I couldn't help but take a photo though. 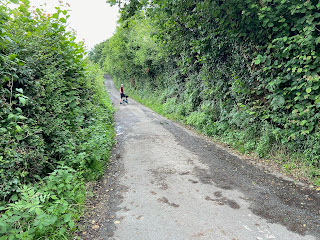 We arrived that the Pond Cafe in good time and only a few minutes after the 06:00 group. I wasted little time in ordering breakfast. I was starving and perhaps stupidly had left home without eating anything. There were a few old faces and lots of new ones. It really was lovely to see so many Brompton riders and bikes out in force! 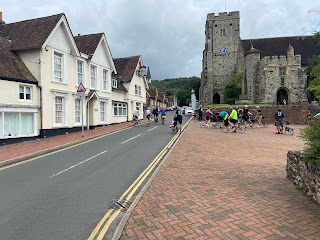 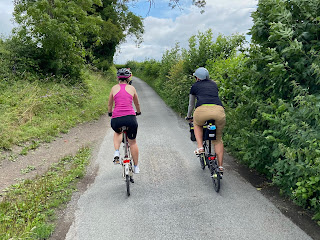 The next few miles were lovely. It was about 20ish miles to the halfway stop and to get there we had some ups and downs and the beautiful Kent countryside to look at. 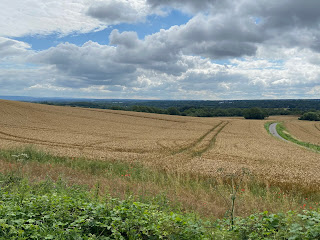 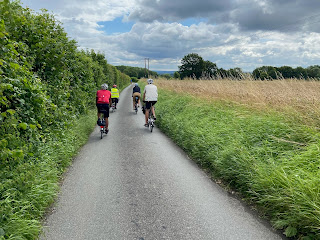 Passing through picturesque villages at certain points I acted as a way marker. This involved standing marking junctions until the tail had caught up. When this came I would then pedal off again to try and catch the front of the peloton. Sometimes I was able to and I enjoyed the little bursts of speed. 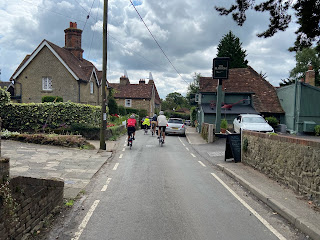 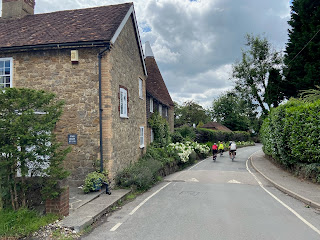 At one point we entered a narrow path that was very much like something out of the 'Lord of the Rings.' I wasn't concerned about the head-hight branches, the wildlife or exposed roots to negotiate but was about my Brompton getting dirty. More on that later! 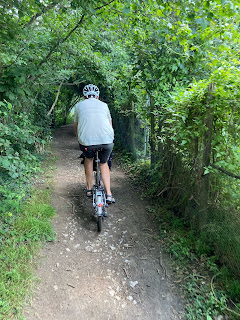 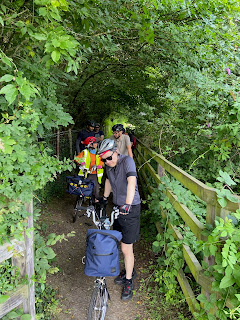 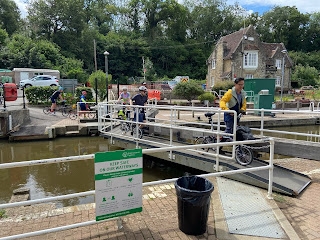 Just before the last little push towards the halfway stop we negotiated a little waterway section that was all rather pretty. 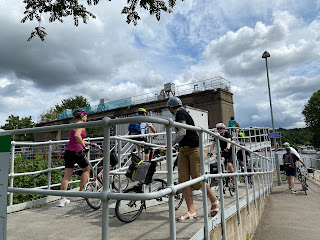 Lunch was very welcome. Four of us on our table went for the burger option and it was all rather good. The time went by quickly as we talked about previous rides, this ride and future ones. I joked about the big hill for the day - Hollingbourne - and there were a few nervous glances just in case my assertion that there was once a cable car one could take to reach the top, was true?! 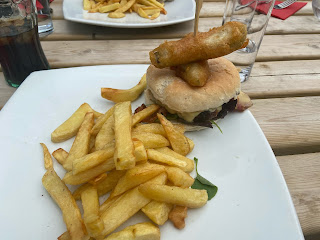 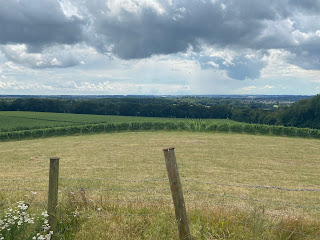 Again the Kent countryside was stunning. Landscapes appeared before us only to be bettered by what came next. 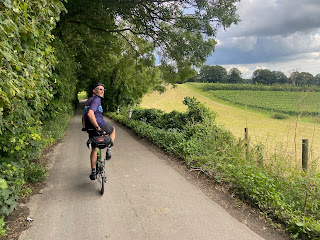 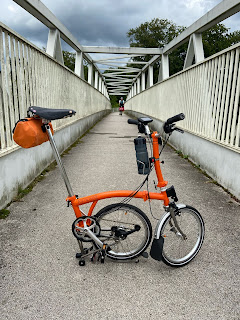 The Pilgrims Way was the route supposedly trod by pilgrims from Winchester to the Shrine of Thomas Becket in Canterbury. On this day it was a Brompton peloton. 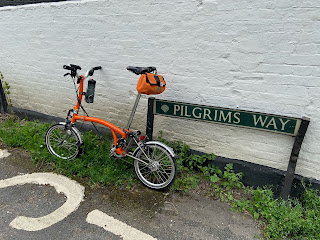 As we got nearer to Hollingbourne Hill things started to get a little darker and the clouds a little greyer. Was this a sign of something to come? Yes of course it was!
At the base of Hollingbourne Hill I flicked the screen on my Wahoo to show the gradient profile. This then allowed me to chart my progress and see what the gradient was. In truth, I didn't look at it once but did think it was a nice thing to take a photo of. 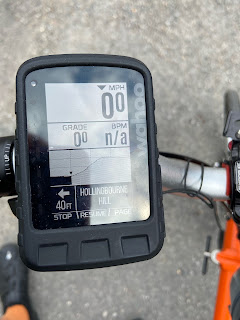 Hollingbourne Hill is quite demanding with the last little section up to where it flattens off a little rather steep. I made my way up at a quite respectful pace and near the top saw James H coming back down. He was to make another ascent! 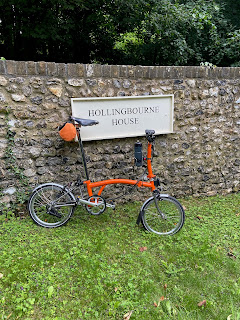 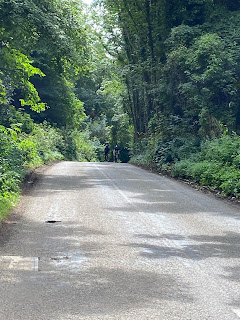 We waited for everyone to arrive and gave cheers to those who had made it. Some walked up it, some walked up a little and others didn't put a foot down. It really didn't matter. What did was that everyone made it and would have a good memory and a tale to tell. 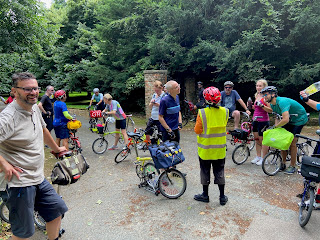 A few miles after Hollingbourne, the distant rumble of thunder could be heard. A spit of rain fell onto the screen of my Wahoo. This was followed by more thunder, louder and closer. Then the rain fell. In almost the exact same spot we sheltered back in 2019 - the last time we did this ride - we hurriedly put on rain jackets. Just when we thought it could not get worse, it did. Eventually we set off with it still raining but nowhere nearly as heavily as it had been.
The next few miles were unpleasant. The wind and rain displaced lots and lots of gravel that now seemed to lie across the entire road surface rather than confined to the middle. Water filled potholes making them an unknown depth and risk. At one point water at least 20cm in depth lay across our paths and we had to cycle through. My poor Brompton. The worst part was seeing a large section of road filled not with gravel but large stones?? 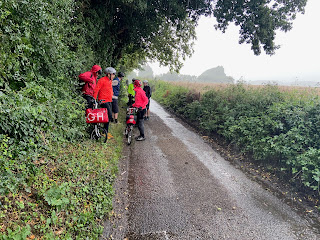 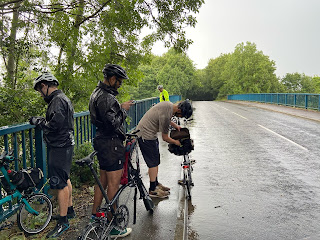 Punctures with rain like this was likely and there were a few. With only a couple of miles from Whitstable the last of them were made good and with the sun almost coming out again we cycled the last few miles to the end of the ride. 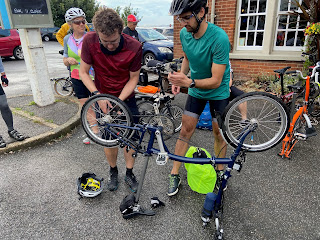 At Whitstable many went to get some fish and chips or a drink or two. I opted for the train station after saying my goodbyes. 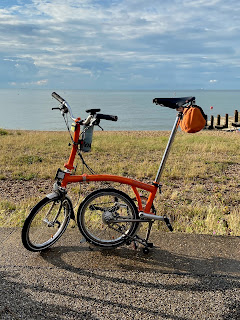 This was a great ride. Lovely route, great company and wonderful to see so many Brompton riders out on adventures again in force. Many thanks to Mark for organising and leading and for Jenny who did the same. Special mention to Ronnie who gave everyone a London Brompton Club sticker. I am so pleased with mine I don't think that I can use it! 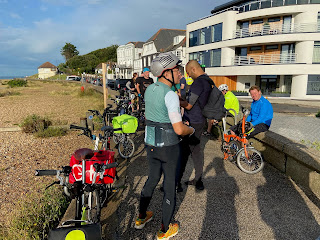 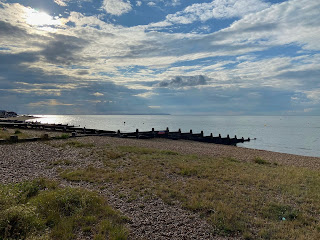 In all I cycled 90 miles and when I got home my right knee was aching a little. Having a look at my SPD shoes I could see that one of the little bolts was loose. On closer inspection I discovered that the little plate under the plastic was broken. This might have been the cause of my knee being quite tender. I will hunt for a new pair.