After a very bust few days at work I had been looking forward to the night ride to the coast I had planned with with Dr John a few weeks ago. We had intended to choose Whitstable as our destination but with the Bank Holiday timetable being slightly disrupted making the return leg for Dr John problematic, we opted for our joint favourite Brighton.

I cycled part of the way and encountered very few other cyclists in Hyde Park and The Mall. The start point was not too long before midnight near the London Eye. The South Bank was busier than it had been the past few weeks but still nowhere near as busy as before the 'C' word. It was good however to see some normality return. Dr John was there waiting when I arrived and not too long thereafter we were off into the night.

Our pace was conversational but the few miles between Oval and Clapham South we always take a little quicker as it tends to be a more lively location. We made the left turn at Cathless Road but for once there was no fox to be seem stealing across the road in front of us.

We reached Farthing Downs and the infamous cattle grid! Infamous as on the small wheels of a Brompton it is a big deal riding over it!! After taking a few customary photos and having a snack we headed off. At this point our respective dynamo lights were beefed up with our larger offerings on our handlebars, as this point becomes more rural. 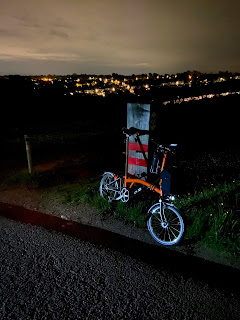 At a location called Chaldon the sign that mentioned the date 1086 caught my eye. I do not know for certain but I would imagine this dates from the Domesday Book on the same year where it must get a mention. 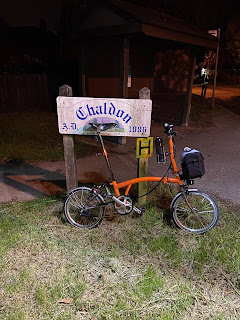 Not too long after 2 a.m. we arrived at Outwood Mill, having been looking out for it. This time we walked round to the side to get a better view. This is a privately owed and a sign reads 'viewing by appointment.' I fancy it would be well worth doing just that. When I looked at the photo I had just taken the reddish hue to the sky took me back to the story of the workers putting the finished touches to the top of the mill, who could see the glow of the Great Fire of London in 1666. 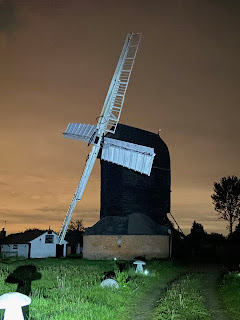 Our halfway stop was the usual 24-hour petrol station that had the bonus of a hot drinks machine! Once we had eaten our various snacks, yet again I started to feel a little chilly so on it was with the boil in the bag light waterproof jacket. This stayed on for a few miles before coming off again.
Turners Hill - once a challenge came and went and now serves as a way of warming us up. Dr John usually calculates what the temperature will be there at 03:00 to help decide what clothing to wear.
Dawn arrived not too long after 04:00 with birds stating to sing their hearts out. In some of the fields in the photo below we spotted some Red Deer running. They settled but as soon as they saw me - trying my best to take a photo - they bolted. A lovey sight though. 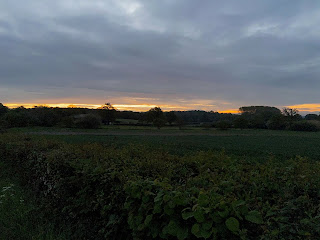 For this ride I had decided to abandon my saddle bag in favour of my Mini O bag. I liked having the extra capacity and didn't mind the weight being on the front. 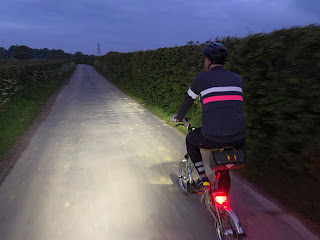 Pressing on and with the sun doing its thing, the scenes before us were stunning. On our previous rides this year we have missed these views altogether as sunrise has been much later. It was great to see and experience it and one of the draws for this sort of ride. 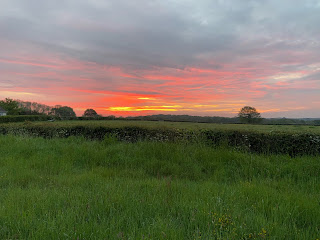 With the sign pointing for Ditchling we knew that the big test, in the form of Ditchling Beacon, was not too far away. The lovely scenery made for some great backdrops (for my Brompton) so I snapped away quite happily. 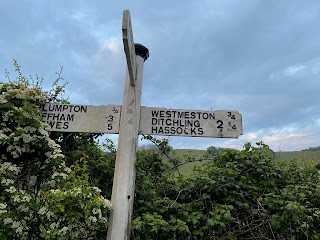 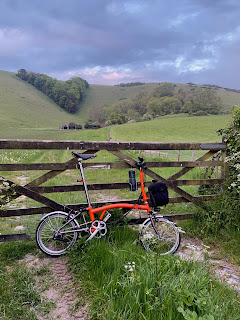 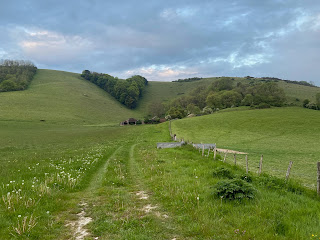 Arriving at the car park at the base of the Beacon we got ourselves ready. Our ascent would not break any King of the Mountain times on Strava (not that I am on Strava) but that really wasn't the point. We made our ascent together and as we rode up, to our left the views in-between the trees and hedges were stunning. 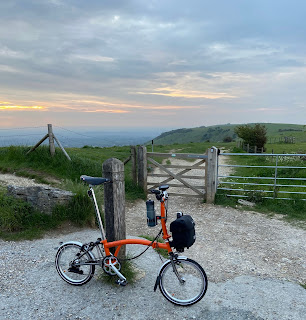 Before 06:00 we had made it and welcomed the next few miles into Brighton, most of which were downhill. 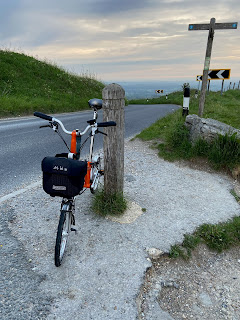 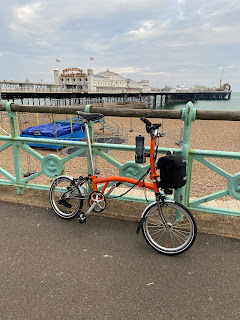 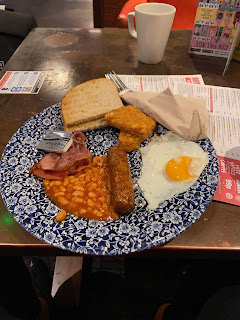 Breakfast arrived quickly and eaten as rapidly. That done we went our separate ways until next time. Another great adventure. Many thanks to Dr John for his company and friendship. I am sure that we will do something like this again soon. 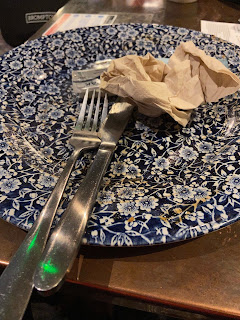 I got home in very good time and after a shower and cup of tea I headed off for a few hours sleep. As I type this I feel fine but my legs are telling me that I have cycled from London to Brighton.