The London Classic on a Brompton

Call me foolhardy if you like but after London to Cambridge yesterday David P and I didn't want to miss the fun of the 'London Classic.'

Last night I felt fine. Legs weren't too bad and I felt good. This morning apart from unusually having a reluctance to get up I was again okay. I was soon off and out and ready for the journey to Gispy Hill and the Gispy Tavern, which marked the start and finish of the London Classic.

The London Classic is an annual Charity bike ride around London. It is perhaps best described as a cycling challenge! This year the charity chosen was the Evelina Children's Hospital at Guys and St Thomas' which is a brilliant cause!

At the Gipsy Tavern there were all manner of cyclist: mountain bikder, roadie, fixie, tandem but we were the only Brompton bikers that I could see...the only ones brave enough, foolhardy enough to take up the gauntlet.

David and I were joined by Mark W and Matt. Once registered we were provided with a map of the route, a sticker and an energy bar - which would come in handy. The navigation was all carefully placed David's Garmin 800 and just after 09:00 we were off.

Ten miles were amassed pretty quickly and we stopped briefly that the 'Look Mum No Hands' cafe. We were then off again. One of the features of this years London Classic was going over numerous cobbled sections. In fact there were 3 five-star rated cobbled sections: Folgate Street, Stepney Green and Wapping High street. The cobbles were quite a thing to negotiate and I didn't appreciate how many still existed in London. 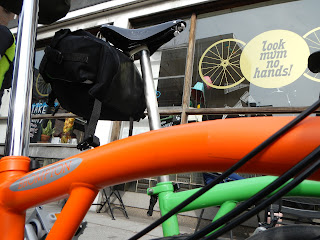 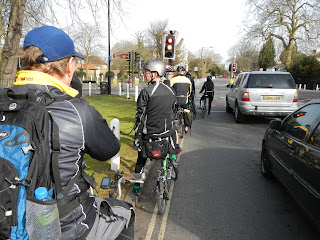 The hills! Oh my goodness!! I love hills. I don't know why but I do like them a great deal. There were lots of hills to go up and of course come down. The hills were demanding to say the least!

Matt went up a good number on a three speed that was a two speed, owing to a gear cable problem. He was amazing and I think he would have been up all the hills if he had of had a full complement of gears. David, despite like me having ridden London to Cambridge yesterday, ascended ALL the hills as did Mark W on a 54T. Chapeaus!

I was able to ascend all but two. I got a little more than halfway up the infamous Fox Hill before my legs told me to get off. (Ironically one more winding hill that reminded me a little of Box Hill a little later I was fine on).

One feature of the ride was that we actually managed to pass quite a few roadies and fixies on the straights and the hills. The Brompton really is the urban king when negotiating busy London traffic. I would also add that David had mapped out the full route with no shortcuts.

The people behind the London Classic did an excellent job! The route was brilliant and pink arrow signs marked the route. It was really well organised and the welcome was friendly. Many thanks to them.


I think that we can take some pride in being the sole Brompton representatives and showing that a Brompton can do pretty much anything on the road. I would go as far as to say that we opened a few peoples eyes to their plus points.


This was a totally Brilliant ride and I loved it. It would not be everyone's cup of tea and I think one would need to be pretty fit to tackle it - especially the hills. The route has been stored and I for one wouldn't mind doing it all over again, perhaps with fresh legs - in the very near future! I definitely want to do this next year!