London to Brighton on a Brompton

This ride is one I have been been looking forward to for weeks. It is also a ride that filled me with an excited sense of trepidation. It also fulfilled a long term ambition to cycle the London to Brighton.

At work, Friday was very busy and I literally didn't stop all day. This was a good thing but despite being kept occupied the thought of London to Brighton popped in and out of my mind.

When I got home I prepared both of my Orange Brompton bikes but decided upon my new Titanium. Getting everything ready I headed off to Trafalgar Square to meet my fellow Bromptonians iCrazyBee and Mark W. We greeted each other, exchanged nervous glances and made our way to the meet up point of the main ride, Hyde Park Corner.

We arrive there shortly after 23:20 and already there were lots of riders. Most were roadies and I have to say they were universally a very friendly bunch - much more so than some of their cousins at Richmond Park.

One of their number had a Specialized bike that he said was about 5kg. He said it was just over this as he had his tool kit, Garmin GPS and lights still attached to the bike. When I picked it up I was rendered speechless! The weight was beyond belief to the extent it felt wrong, as if I were lifting a cardboard cutout. He explained all the carbon elements - including £2,000 carbon wheels - and that he had further modifications to make the weight approach 4.5 kg!

After a safety talk by the organiser and main man, Simon we headed off bang on midnight. It was was the point of no return and excitedly I switched on all my lights bar my new 'Hope Night 1' LED light which I was saving for when we reached the outskirts of London where street lighting would not be around.

The ride was incredibly well organised and every so often we stopped and waited for slower riders or those who had missed traffic lights. No one was left behind. The 'Tail End Charlie's' did a brilliant job at making sure everyone knew where to go at junctions and ensuring the back riders where safely on route.

For a few days before the ride I had deliberated on what to wear and pack. I didn't want to carry a great deal and wanted to be as minimalistic as possible. As far a clothing was concerned I opted for:

This all worked pretty well and despite the chill in the air I was comfortable for the duration. In the saddle bag (Carradice Roll Bag) I had a couple of inner tubes, basic tools, snacks and water.

After a few miles the streetlights got fewer and far between and only present at larger junctions. It was then the I switched on the 'Hope Vision 1.' It worked incredibly well!! The light was very bright and wanting to get 6 hours out of it I opted for the setting down from the brightest. This was easily brighter and more powerful than any of the bicycle lights I have ever owned. It was nothing short of brilliant and I am glade I bought it!!

The pace was brisk and Mark and I found ourselves keeping up with the top third of the riders. Our London Classic ride helped us on the many hills we encountered, some of which were quite severe! Mark and I found that when we got to a hill we could claim the scalps of many of the roadies - the smaller wheels of the Brompton helping us in the ascent.

Our little Brompton bikes were doing us proud and I suspect some on the ride underestimated our ability to keep up. A few riders were kind enough to comment, 'you don't half go on those!' It's nice to do your bit for Brompton.

Mark and I continued to keep a good pace and our fellow Bromptonian iCrazyBee maintained a steady but confident pace further back.

At approaching 25 miles (I think) we entered a location referred to as the 'Badlands.' I cannot tell you if this is its real name or part of some cycling folklore of old. What I can tell you it that it was a road through a forrest, that became a dirt track getting gradually narrower and narrower. It would have been terrifying to cycle this on ones own or even with a couple of companions but the assembled mass of cyclists with thousands of combines lumen light power made it an interesting experience.

Some thirty miles in shortly after 3:00 a.m. we reached the home to the 1st Burstow Scouts. This was the halfway point and upon entering the welcome was friendly. Lined up were sandwiches of all description and a multitude of cakes - all homemade. The bread and butter pudding beckoned me and I selected a near family sized portion and a cup of coffee. For several minutes I was silent, deep in thought at the joy of consuming a doorstop of bread and butter pudding  that was...pretty fine!

There was a great deal of chatting going on and a few of our number decided to get forty winks. One of the people we sat next commented to Mark, 'did you see those crazy people on the Brompton's?' Mark politely and with some pride informed him that he was one of those crazy people.

With our refreshments over we ventured outside for the final half of the journey, another 30 or so miles. Coming from the heat and comfort of the Scout Hut, we felt a chill so decided to put on our various lightweight waterproof/windproof jackets. They worked well at insulating us from the nip that was in the air.

As we rode along with dawn approaching we heard the dawn chorus in all its glory as a multitude of birds almost sang as we glided past. The moon - almost full - which had helped to illuminate our entire journey looked stunning against a near cobalt blue of the dawn sky.

Approaching the sign for Ditchling Beacon being only a mile away certainly concentrated ones mind. Ditchling Beacon is the third-highest point on the South Downs. The only road access to the summit is via the steep and narrow Underhill Lane directly at the foot of the Beacon, adjacent to the car park. It was here that people readied themselves for what was to come. The road travels its steep ascent with several tight bends, rising from 90 metres above sea level to the summit at 248 metres in about a mile. 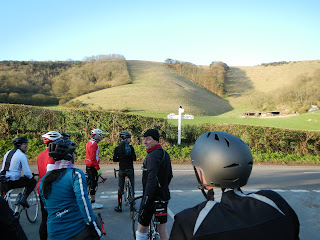 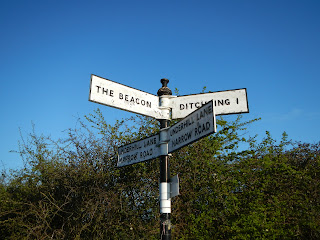 At the car park several riders jettisoned all items they could throw away that would add to their weight - mainly water in water bottles. Mark and I felt that it would be better to get going and decided that we wouldn't wait around getting cold for iCrazyBee.

For about two thirds of the ascent I was able to keep up with Mark. The road seemed never ending and the point came where I put a foot down and got off. Mark stoically continued. I started to walk but then thought better of it, walked back to roughly where I had got off and cycled the rest of the way up to the summit, albeit incredibly slowly! Perhaps next time I will make it all the way up without a foot down?! It was easily the most demanding ascent I have ever attempted and I can now appreciate its fearsome reputation.

Mark was definitely King of the Hill and I should also point out that he ascended on a 54 tooth chainring! Mine is the standard 50 tooth, making it easier to pedal on hills so hat off to Mark for another great ascent of all things hilly!! 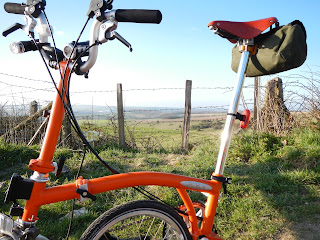 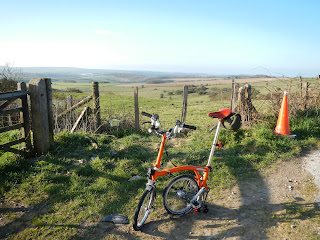 The views from the summit were beautiful. The sun was out and the sky was punctuated by wispy white cloud. We waited about 30 minutes and saw iCrazyBee coming. I was rather proud of my riding partner and friend iCrazybee. He has had a few moments in the preceding weeks where his confidence has been knocked. He might not have been the fastest and he might have walked up a few of the hills but he did the London to Brighton with confidence. I hope that this achievement gives him more self belief to tackle more rides like these! 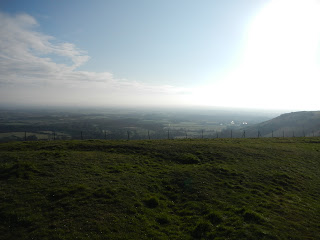 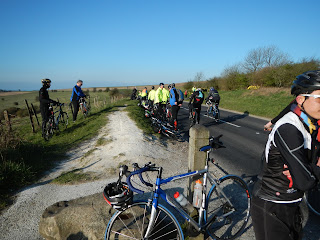 We started the ride as a trio of Bromptonians and we made the rest of the journey into Brighton as a trio. The journey was almost downhill all the way. As we glided past the back of Ditchling Beacon broken, one of the roadies shouted out 'go, go Power Rangers' perhaps because of the bright colours of our bikes.

The sight of sea brought that all familiar excitement of summer holidays by the seaside and we pressed on for the Madeira Cafe where we had a mean fried breakfast.

With breakfast over we headed to the seafront to get some pictures of our bikes in Brighton. Unfortunately the pier opened too late for us to stay around as we had a train back to London to catch but we did take a few pictures of it and the famous Royal Pavilion. 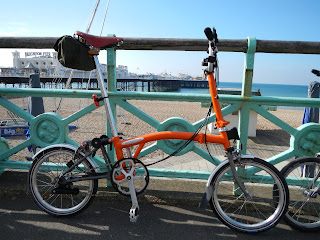 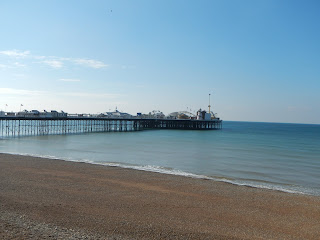 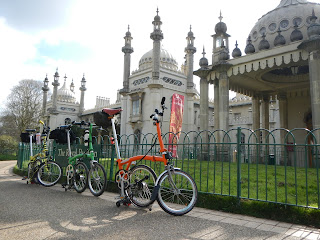 Our train back to London left on time at 10:19 a.m. and by 11:10 a.m. we were back in London. We said our goodbyes and I decided to cycle the 5 or so miles back to where I had parked my car. As I cycled through Hyde Park I thought to myself these people don't know I have just finished cycling from London to Brighton.

This was a great ride! I really enjoyed it and would love to repeat it. There is something about night riding and riding in a large group that is hard to beat. As I write this I don't really feel any worse for wear other than tired eyes from wearing contact lenses too long.

I would like to think that we were all good ambassadors for Brompton. I suspect we might have changed a few riders perceptions of the best small wheeled bike. I certainly think that with Mark and I able to maintain a very brisk pace and be in the top third of riders for much of it, we might have?

Many thanks to Simon the organiser of this ride, the volunteers at the Scout Hut for preparing some lovely refreshments and opening up in the small hours. Thanks also to to the Madeira Cafe for a good/speedy breakfast and last but not least many thanks to my two fellow Bromptonians iCrazyBee and Mark for some excellent company.

You can click on the link below for the ride data and maps recorded by the Garmin 810.