London is a rather special city. I would of course say that as I have lived here all my life and am therefore rather biased towards it. At night however something magical takes place and London takes on a whole new personality. That which you saw during the day becomes very different. Iconic buildings are further enhanced and are afforded the opportunity to beguile and entertain in a totally different way.

Night rides have become a staple diet of the London Brompton Club and the reduced traffic - vehicular and pedestrian - enhance things further still.  I was therefore looking forward to the return...the re-run of the Docklands by night ride.

The meeting point for this ride was the London Eye between 18:00 - 18:30. I knew that I would have to allow plenty of time to get there by bike as at this time there would be lots of traffic. I was proved correct as it took ages to negotiate Oxford Street, Regent Street and beyond to the London Eye.

On Oxford Street my Brompton and to some extent I caused a flurry of photographs to be taken by tourists. One with a heavy German ascent was very taken with my Brompton and enquired about it. Even though I wanted to get going I did stop and chat for a while as he was such a nice chap.

Reaching Hungerford Bridge I carried my beloved Original Orange Brompton up the stairs and attempted to wheel it past, among and by literally hundreds of people strolling, taking pictures, having a chat, waiting for friends and generally milling about. I decided to take a few pictures of the views as the sun was close to setting and the London skyline as ever was stunning.

The usual suspects were of course waiting at the meet point but David H from Japan who was here in the UK for about a month was also there. It was great to finally meet him after having the odd online communication. Sadly he was unable to ride but it was great he gave up his time to say hello to us all and send us off on our adventure.

Unable to resist the temptation of taking lots of picture I decided to take a few more just before we got going. I was using my Lumix GH3, paired with a new addition of a 19mm f2.8 prime. As the GH3 is a micro four thirds camera the 19mm becomes a 38mm. It is a great little lens but as it has no image stabilisation a steady hand for low light photography is required! 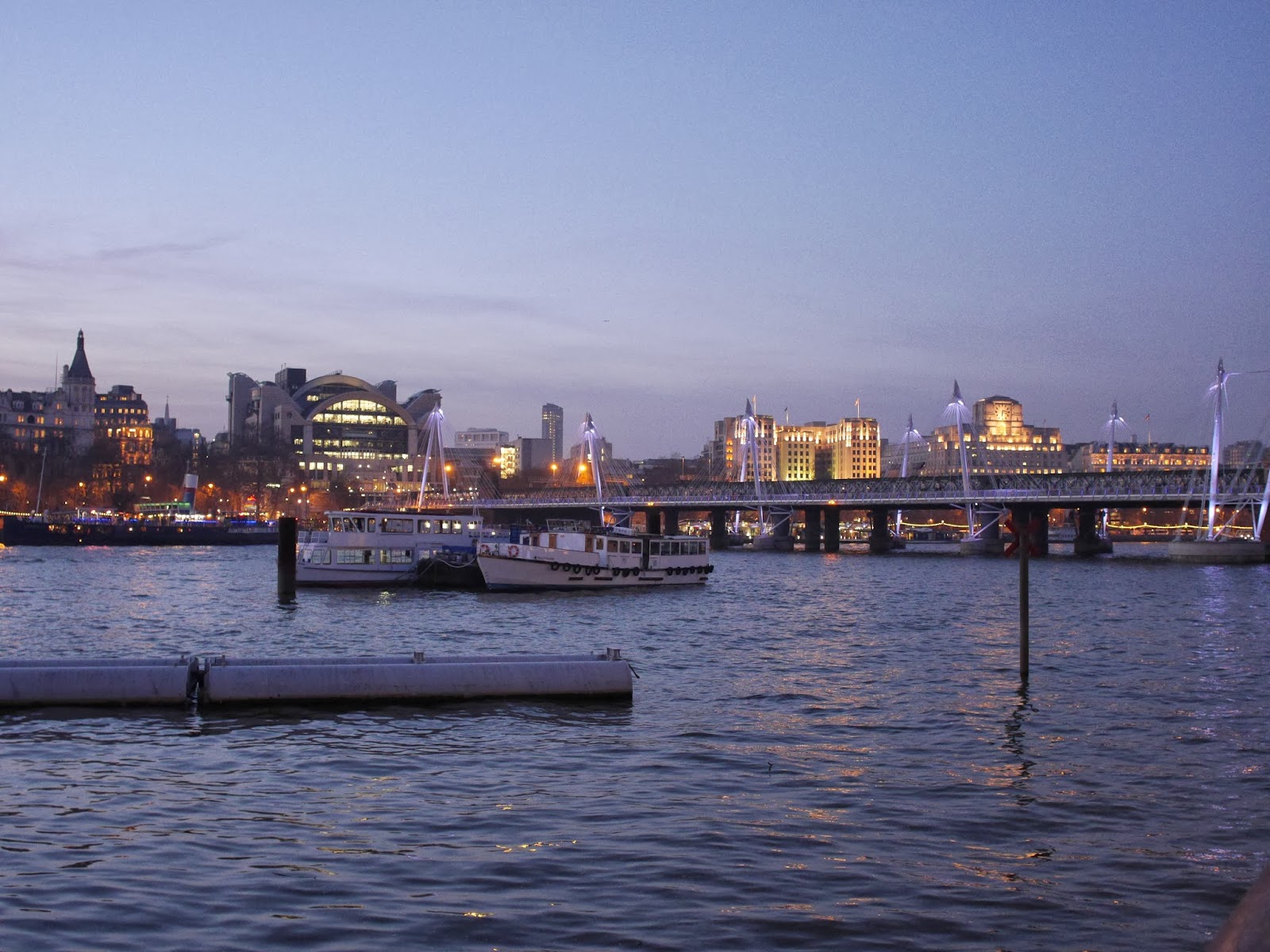 The ride was broken by several photo opportunities, the first of which was the view of Tower Bridge. Later we would be cycling over this bridge but for the meantime we busied ourselves taking photo of it. 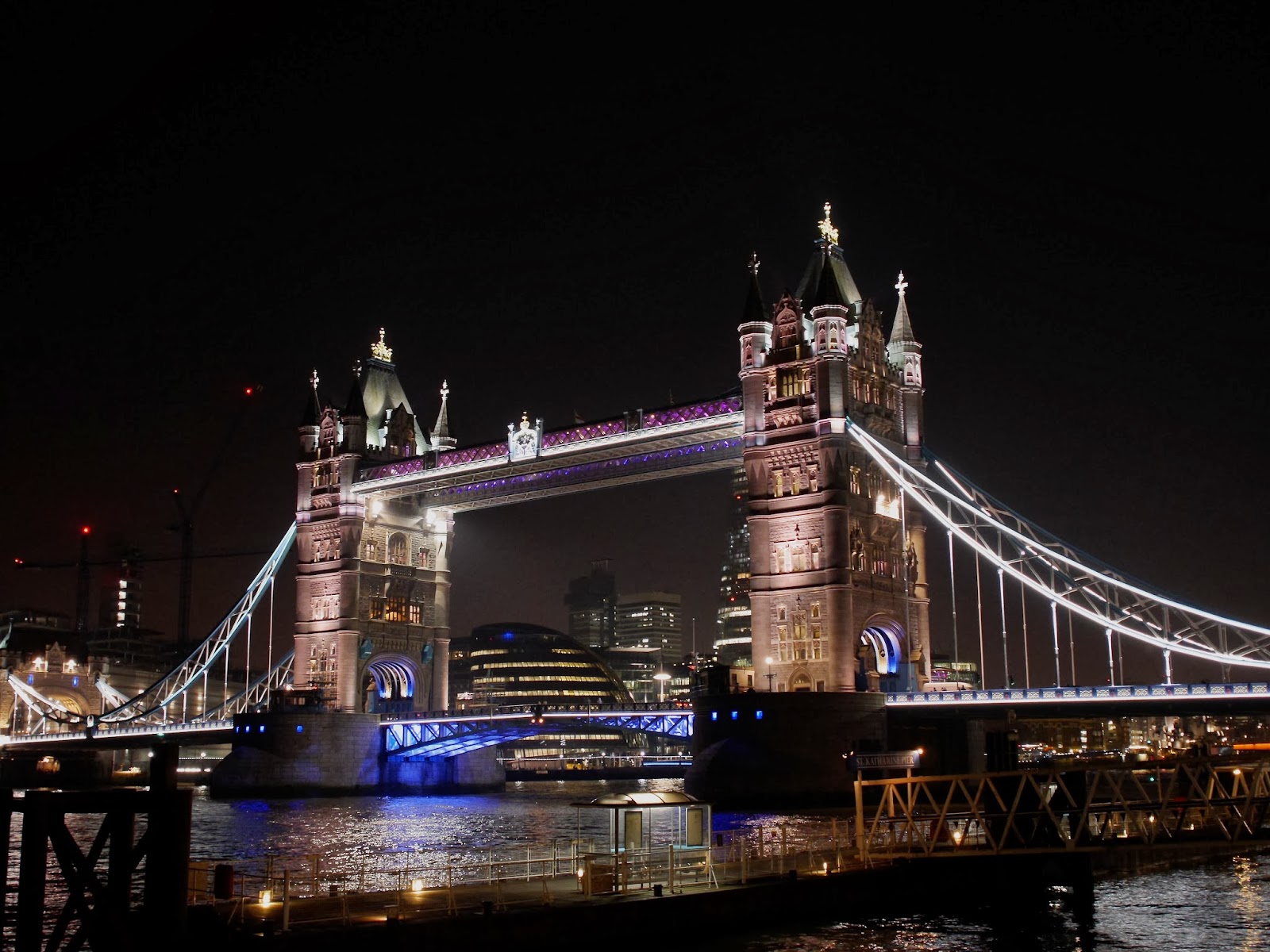 The route was a particularly good one, fashioned by David P who has an uncanny ability to organise journeys that never fail to disappoint. We were also blessed by some glorious weather. This particular winter in the UK has been dire with lots of rain and high winds. The past few days have been dry at least but there has been a slight increase in temperature - certainly enough to make even the most gloomy pills of this world suspect Spring might finally be here!

Our journey didn't tai us too far from the river Thames and its views were stunning. The way the light reflected off the surface of the water added another dimension to the overall scene. At one point we saw Canary Wharf in the distance and knew that it wouldn't be too long until we were cycling through it.

At one of the roundabouts there was a traffic lights feature. When I first encountered this a few weeks ago I was initially confused as to how on earth I would know when to proceed? This time I could appreciate it for what it was! 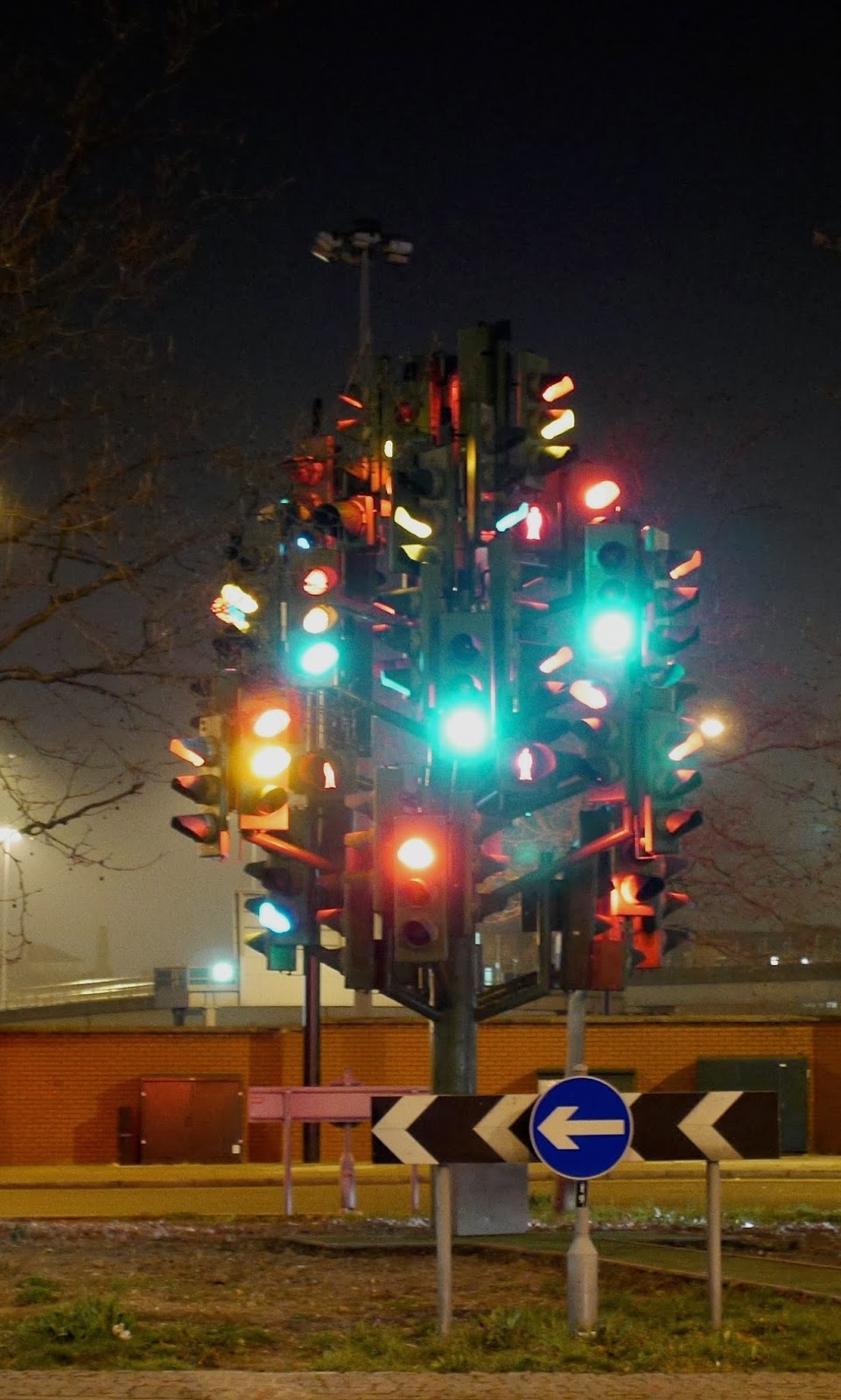 As we approached Canary Wharf I was again struck by the idea that I must come back one day to take some photos. The only time I have ever been to this location has been when on my Brompton. 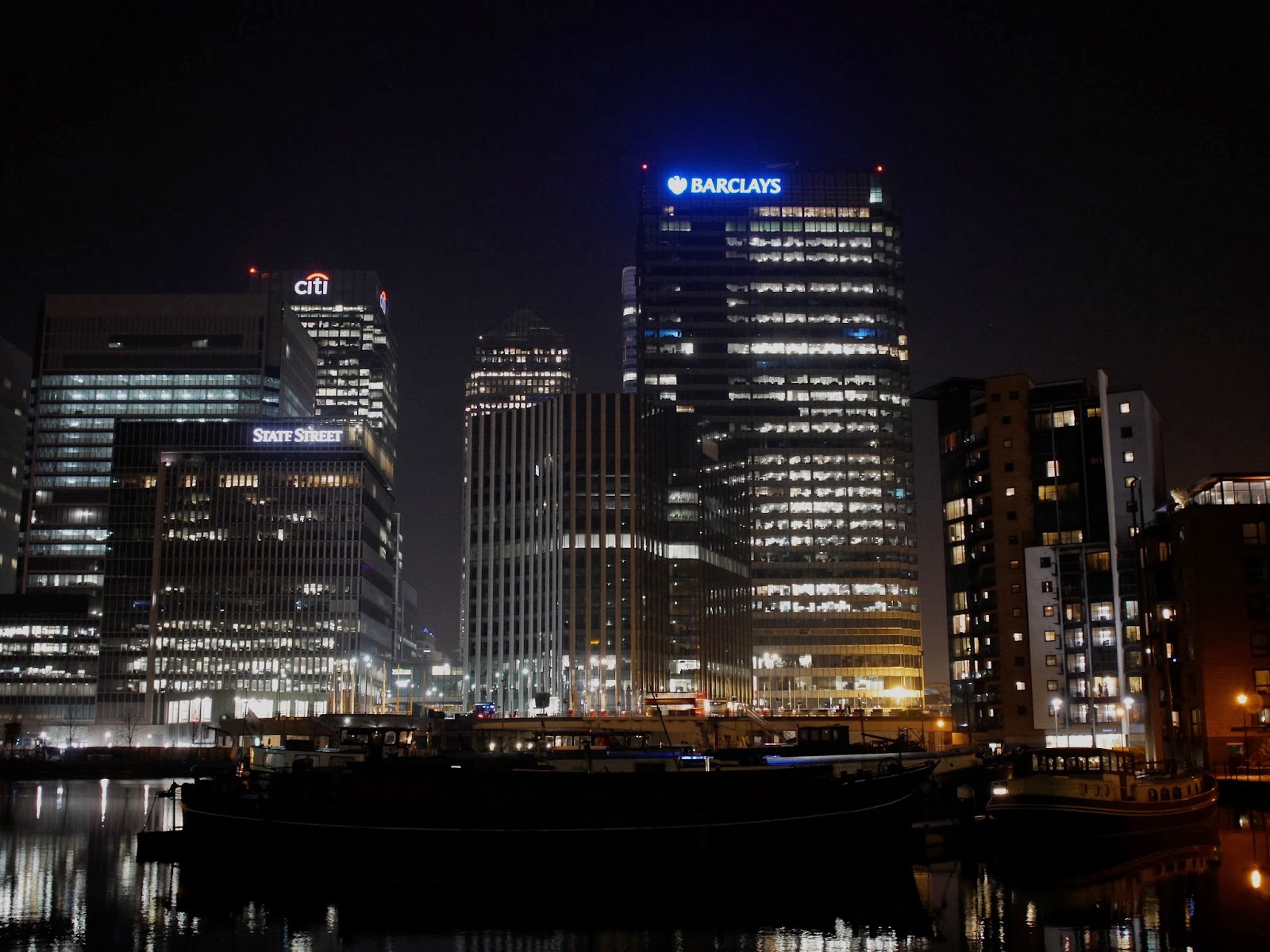 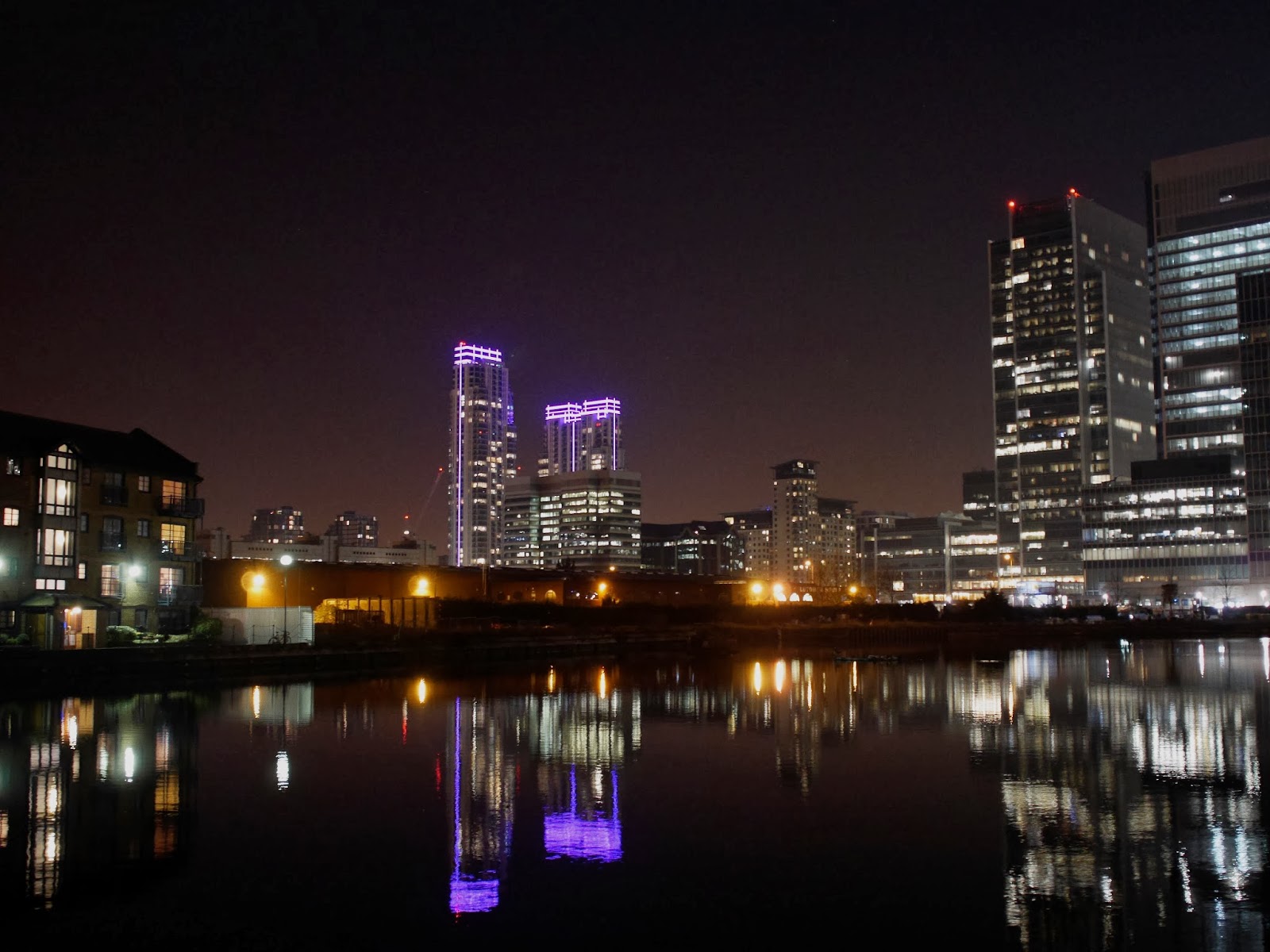 The whole area seemed to be filled with offices or riverside flats. Some of these looked good and were arranged around carefully manipulated former docks.

Heading back through Canary Wharf we headed for the fish n' chips part of the evening. I have to confess that it was my intention to just buy a cold drink - trying to be good and cut back on the calories - but as I knew I would count up some 1600 calories by the time I completed the ride I decided to forgo the fish and just have the chips.

Having fish and chips is a bit of a novelty for me as it is just something I rarely eat. The chips were cooked to perfection, golden and hot. The addition of salt and vinegar further enhanced the overall taste sensations.

As we consumed our well deserved reward some local youths were playing an unusual game with a football. This consisted of kicking it as high into the air as possible only for the opposition to try and outdo them. Occasionally their football strayed our way for which they apologised. It was of course fairly harmless stuff but I was on my guard nonetheless. This is a preoccupation when you own and in some ways love your very own Brompton. 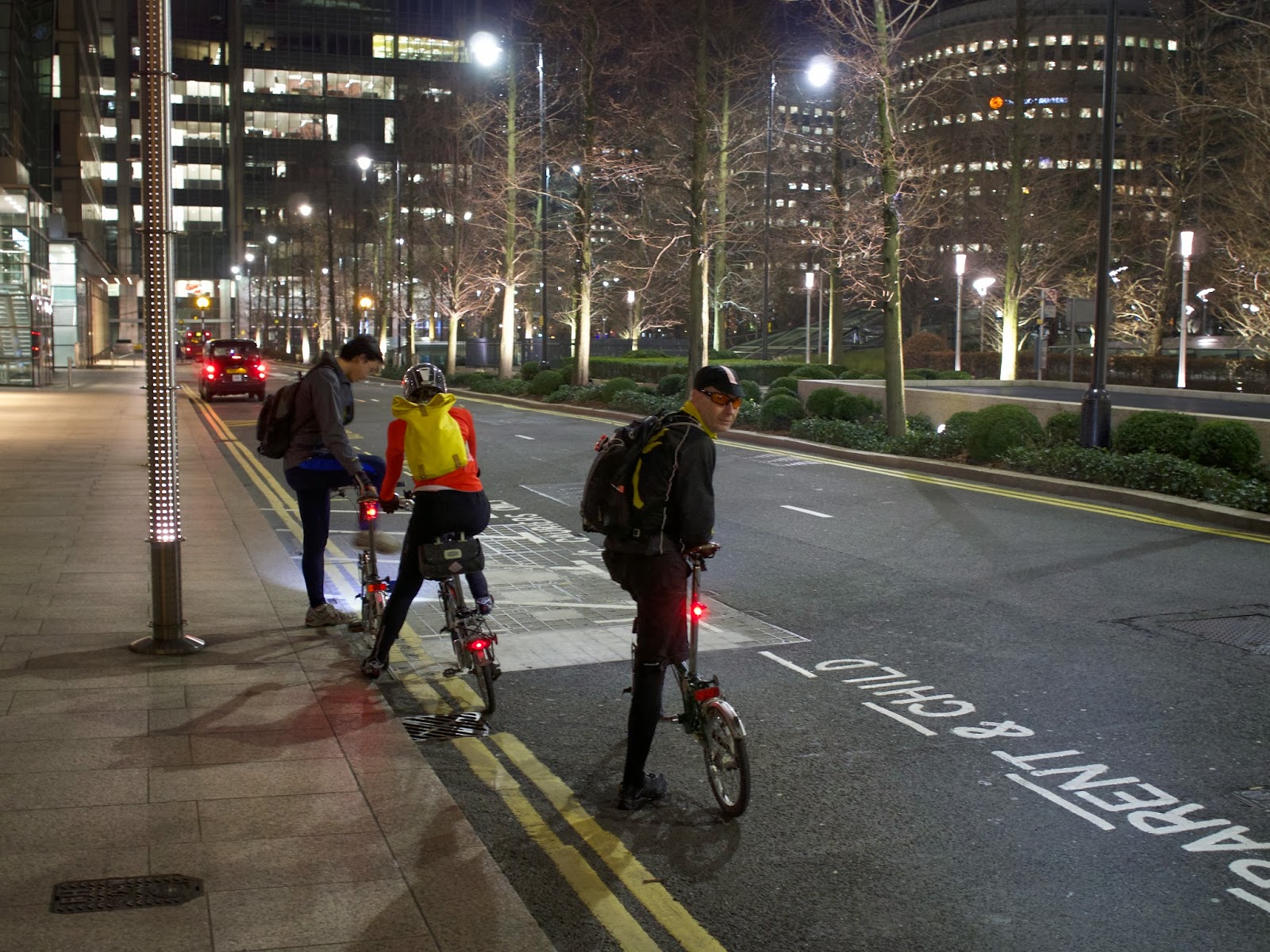 Just before reaching the Greenwich foot tunnel that allows pedestrians to walk under the river Thames we said goodbye to two of our number. The rest of us made our way around the historic Greenwich and towards Greenwich Park.

The Greenwich foot tunnel has been in the process of being refurbished and as such the barriers - presumingly to stop naughty cyclists from cycling its length - have been removed. We of course wheeled our bikes along...albeit rather rapidly!!

Once out on the other side of the river Thames the famous Cutty Sark ship greeted us. We will again use some of this route in a few weeks time for my other cycling buddy, Mark (King of the Hill) 'Thames Triple Chaser Ride' one of my favourites which I am looking forward to. 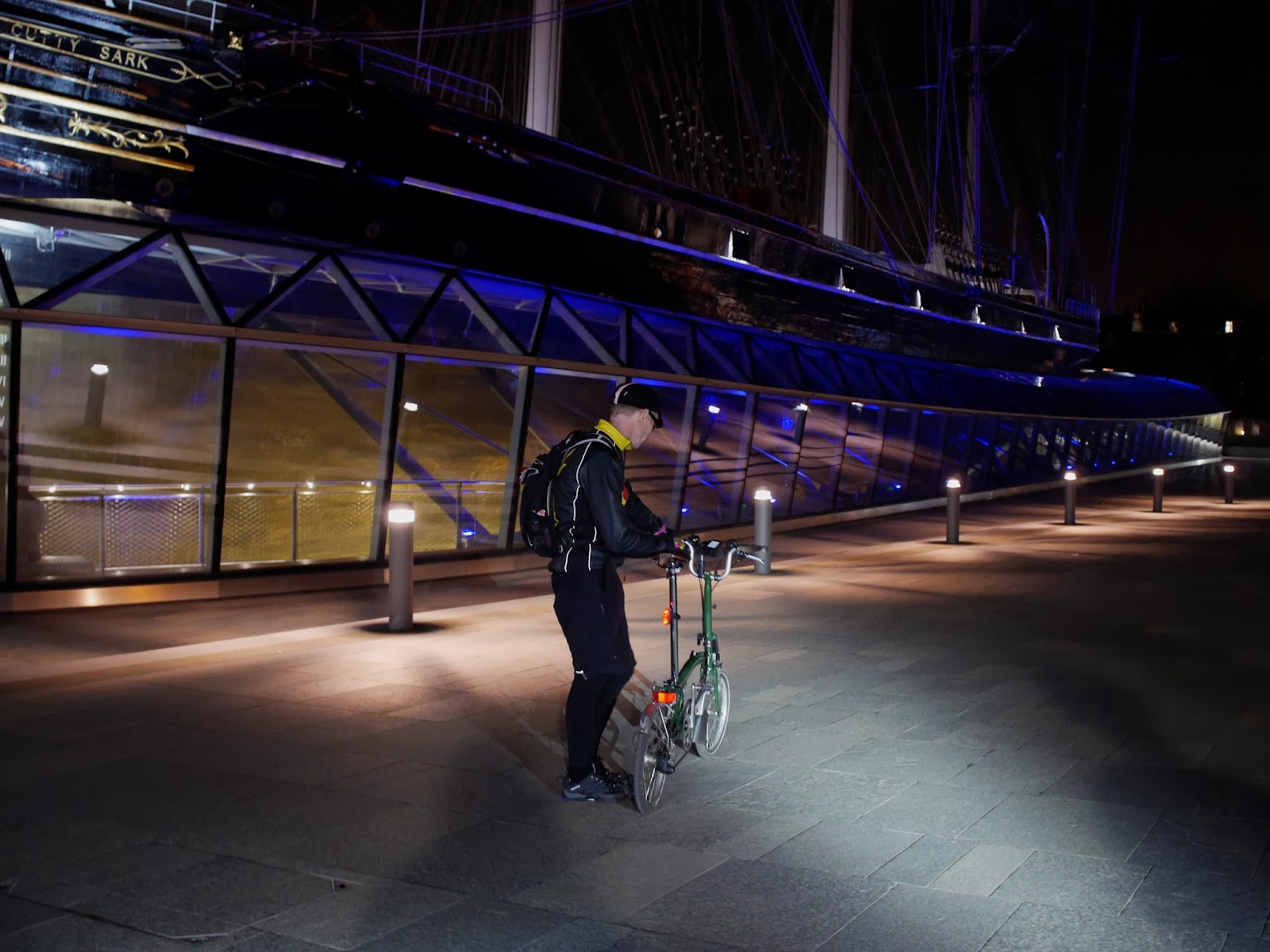 At that time of night the park was sensibly shut but its draw was a hill that ran almost parallel to one inside the park itself. This hill was quite steep and went on for a fair bit. Regular reader will already know that I do like my hills. This particular hill was dotted with quite high speed bumps. This meant that as soon as you went over one it was hard work as you were forced to pedal hard because of the step incline.

Ascending this hill after eating a bag of chips might not have been the best of ideas but it certainly provided the fuel I needed assist. David P motored ahead with incredible power and fluidity and I closely followed. Thankfully, I beat the hill with not a foot being put down or stopping to catch ones breath. My rule is that unless you can say that, the hill has beaten you.

The photo opportunities diminished slightly as we pressed on towards central London. In the distance Tower Bridge looked almost pleased to see us return and we were afforded a last stunning view of the London skyline at night. 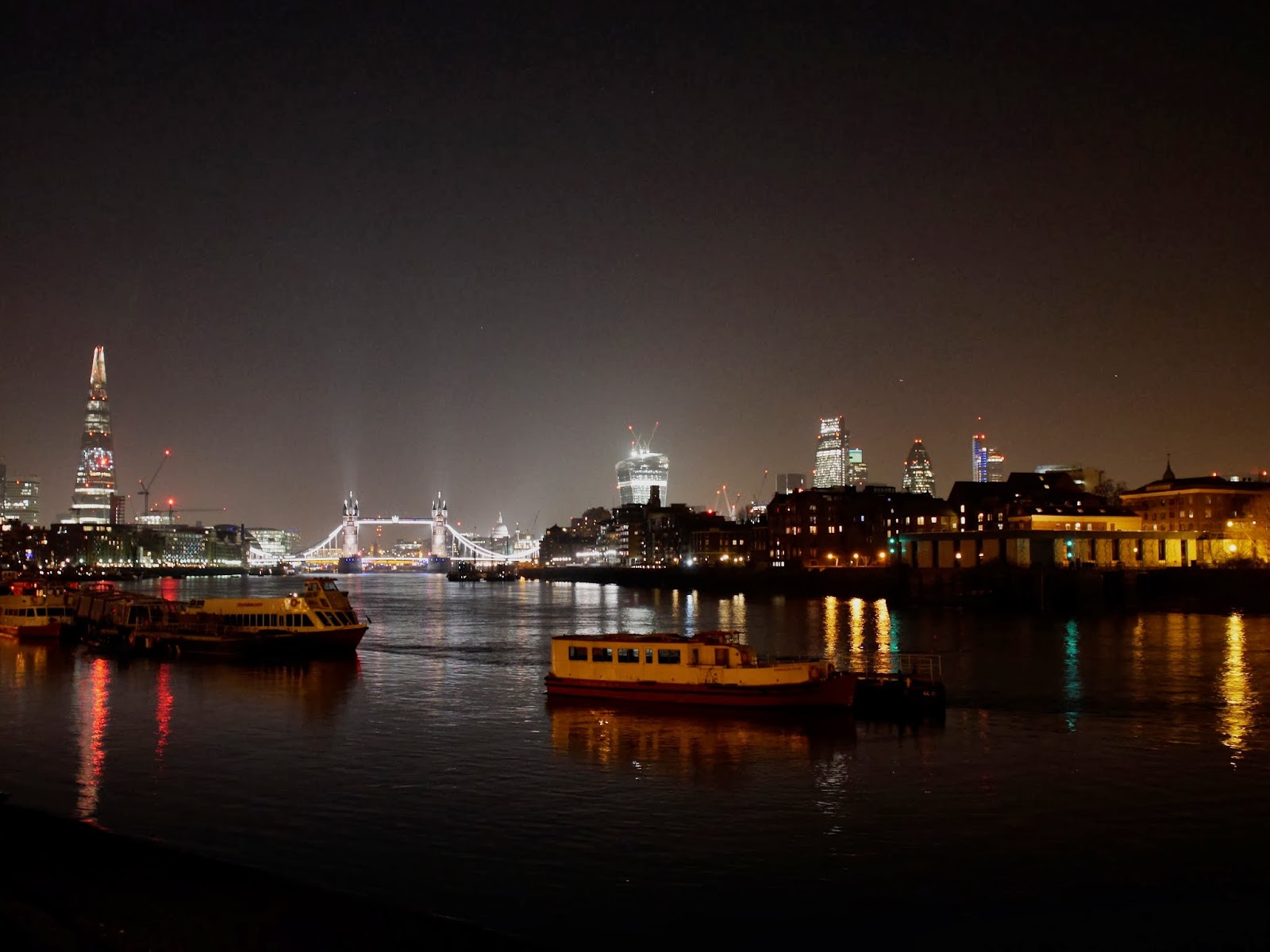 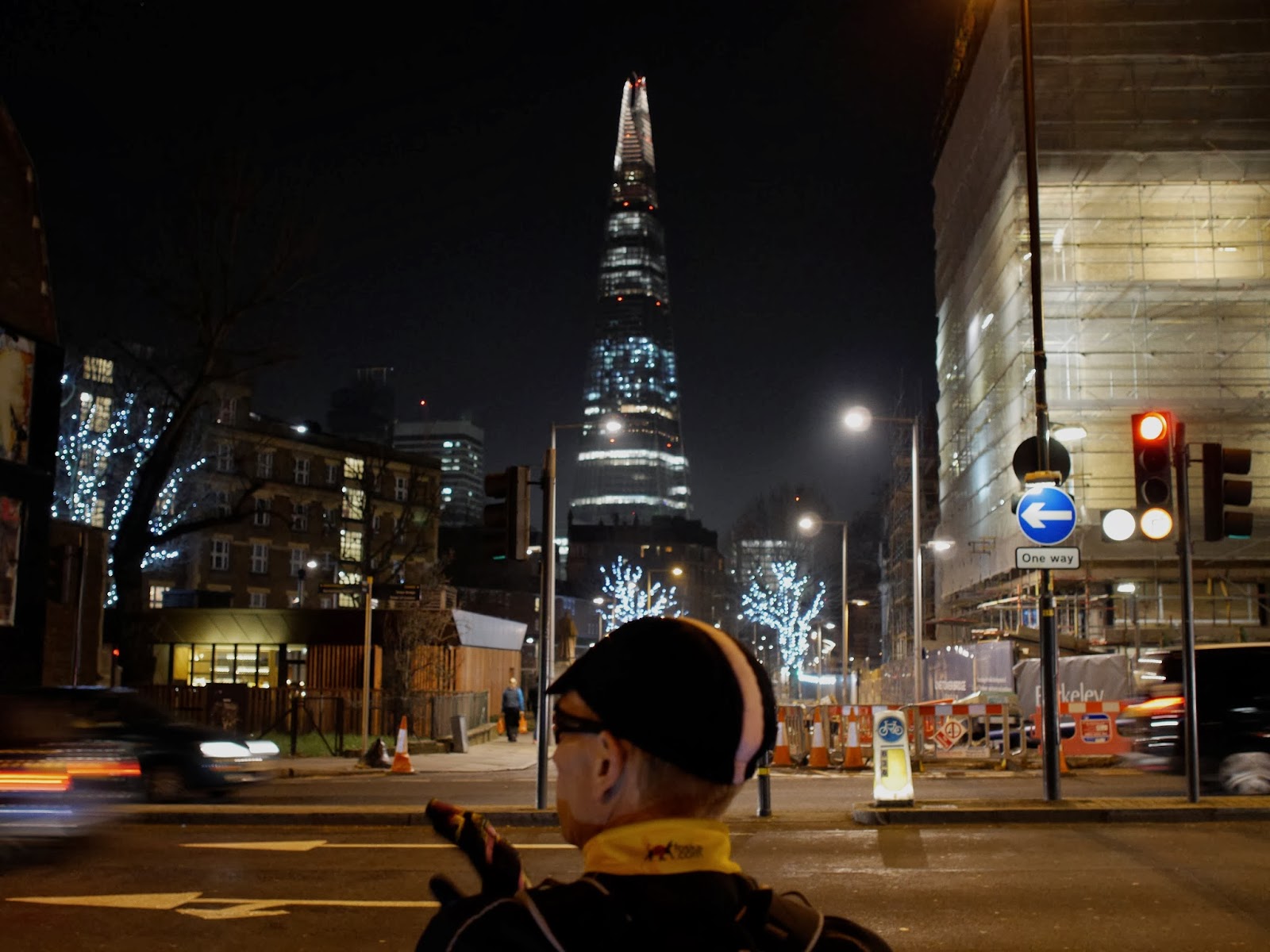 Upon reaching the South Bank we headed for the set of colourful lights that adorn an otherwise dull arch of a bridge. We said goodbye to David and Anne while my riding partner and I headed back towards the London Eye. 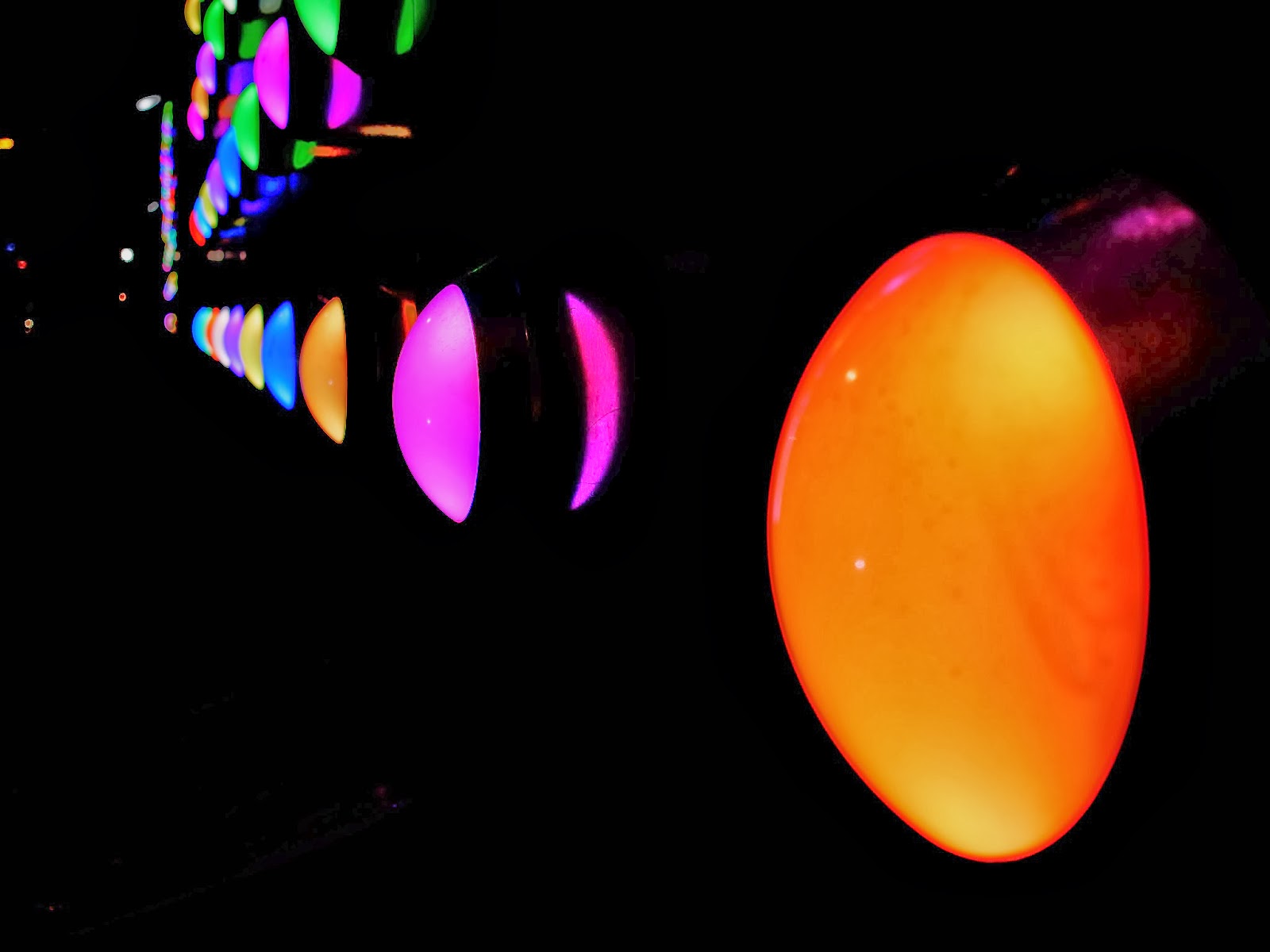 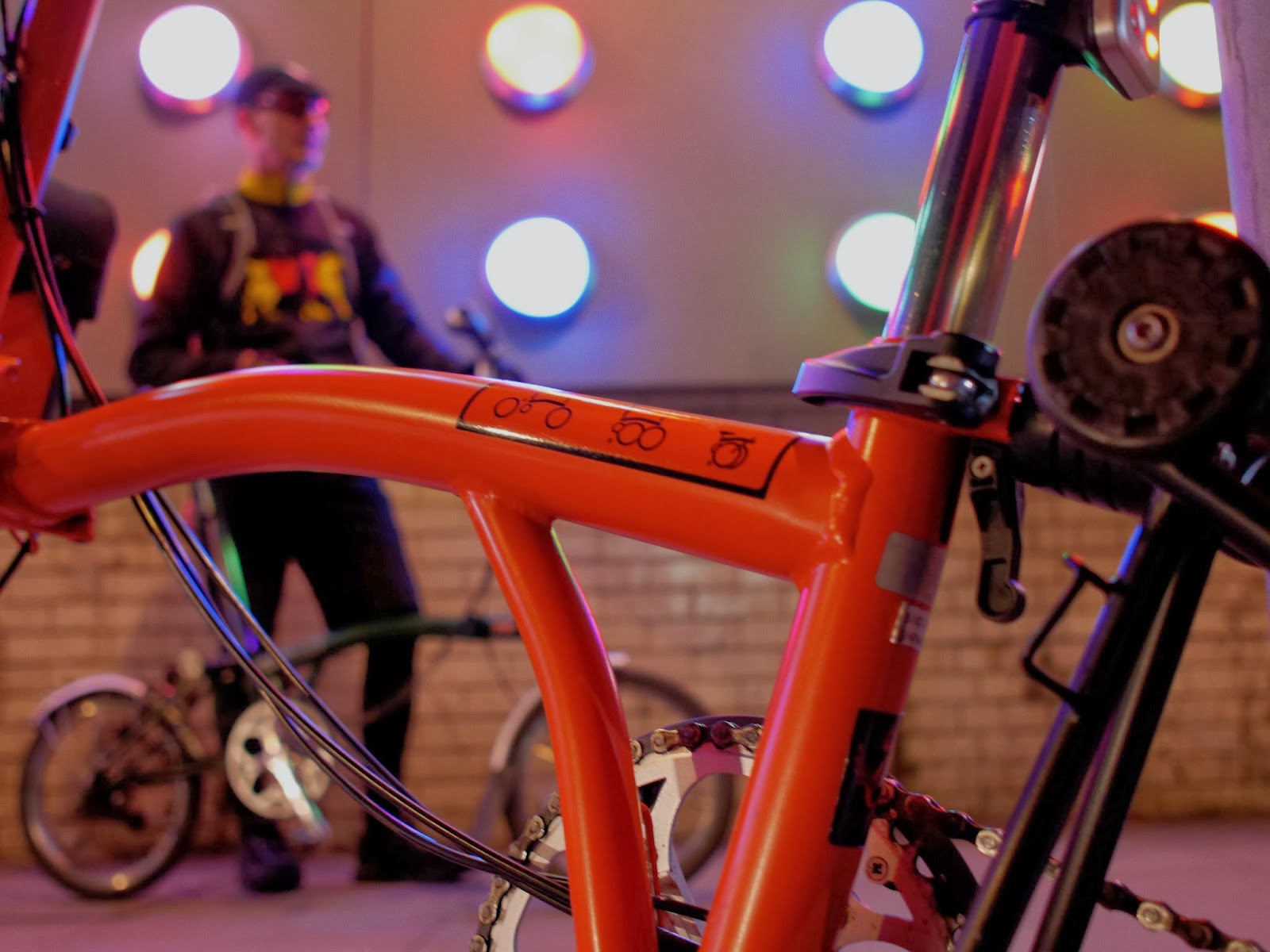 We travelled together as far as Buckingham Palace before saying our goodbyes. I hope it won't be too long before my riding partner and I are out on one of our adventures.

Travelling past Buckingham Palace I fancied I could see a curtain twitching. Could it have been....no surely not? Reaching Wellington Arch made me pause for thought as this would be the meeting point in less than two weeks for an overnight rode to the coast.

I cycled through Hyde Park and up towards Marble Arch and had the park to myself. From entering to exiting I did not see a soul. This created an atmosphere all of its own.

This was a brilliant ride. Weather, company and route. Again many thanks to David P for his wonderful organisation and expert leadership. Wherever you live this is something you could do too. Taking a bicycle around your city is free and you are bound to see something of interest. So, if you like the sound of what you have read why not give it a go!

The map and ride data recorded by my Garmin Edge 810 can be viewed by clicking on the link below.

Map and ride data for the Docklands by Night on a Brompton
at March 09, 2014