Best Way to See London - That will be via a Brompton of course!

The alarm on my iPhone was set an at ungodly hour this morning. As I indicated I wanted a snooze for a few moments - I did mention it was an ungodly hour - I lay listening to the dawn chorus.  I dectected a robin, blackbird, wren, dunnock and a perhaps a couple of owls. They too-wit too-wooed. I have of course heard owls in our back garden before. I lay quite smug that such wildlife existed outside my bedroom window. The snooze function of my iPhone was working well as I drifted off again into mild sleep. Too-wit too-woo!! It was as if they we're sitting outside my bedroom window ordering me to rise. Too-wit too-woo!!!! At this point I could have told these owls what they could do with their too-wit too-woo as I lay, now stone cold wild awake!


Once I was up normal service resumed and I was soon off to Trafalgar Square, the agreed meeting point. London was quiet at this time of the day - just before 07:30.  There were few people about and arriving at Trafalgar Square I pretty much had the place to myself. I was meeting Mark (King of the Hill) to join him on his recce of a ride he has planned in a couple of weeks. Joining us was Matt (veteran of the London Classic and Dunwich Dynamo, Geoff (veteran of many a ride) and Femi who is sensibly joining us on rides more frequently.


Before they all arrived I decided to head towards Nelson's Column to take a few photos. Having Trafalgar Square to myself was somewhat of a novelty as it is normally one of the busiest locations in London. If anything it felt rather strange. 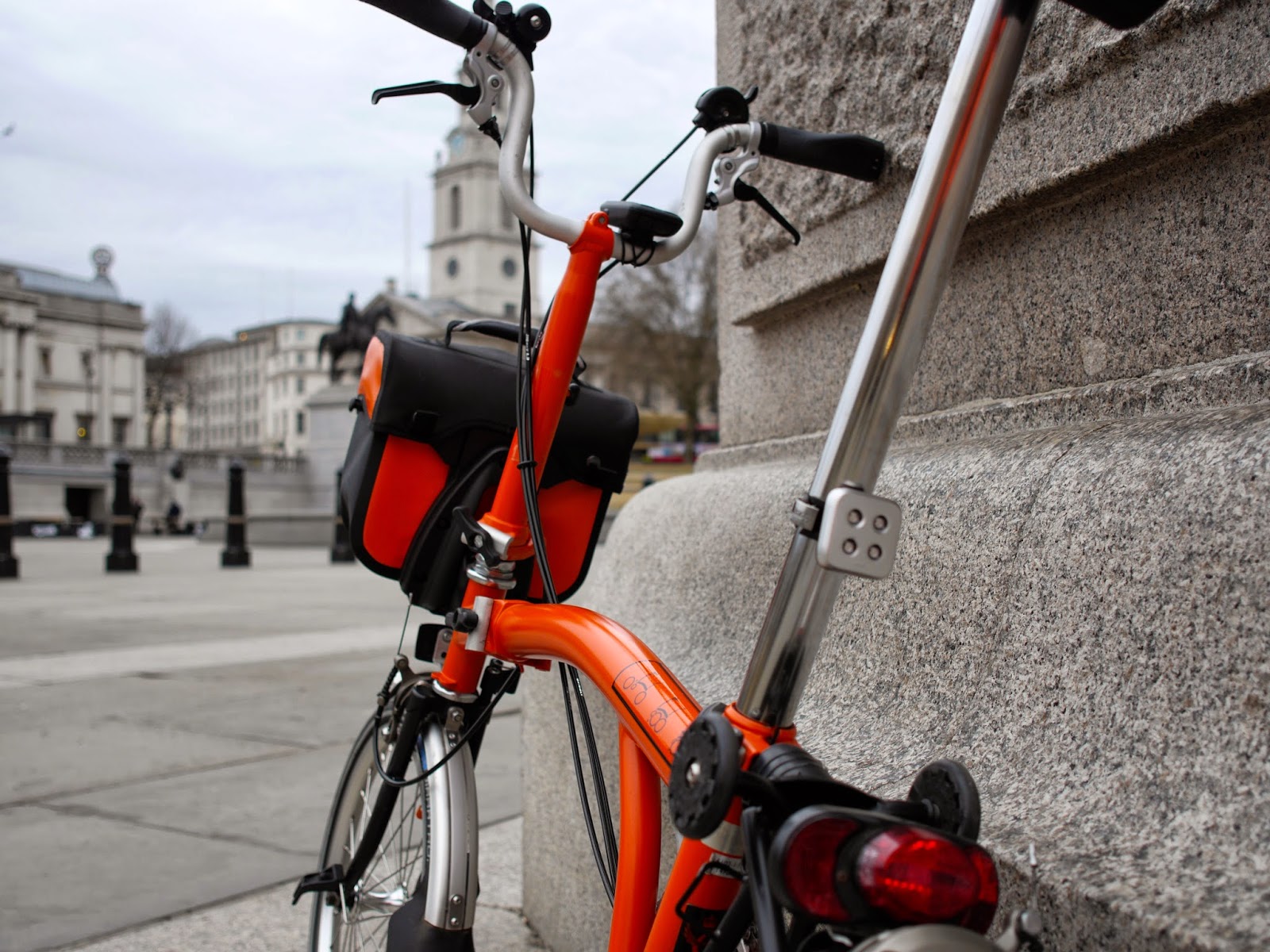 As I propped my beloved Original Orange Brompton for a photograph, thoughts turned to next Friday where I will almost certainly be battling my way towards Charring Cross to meet Geoff before we head off for the meeting point for the night ride to the coast. 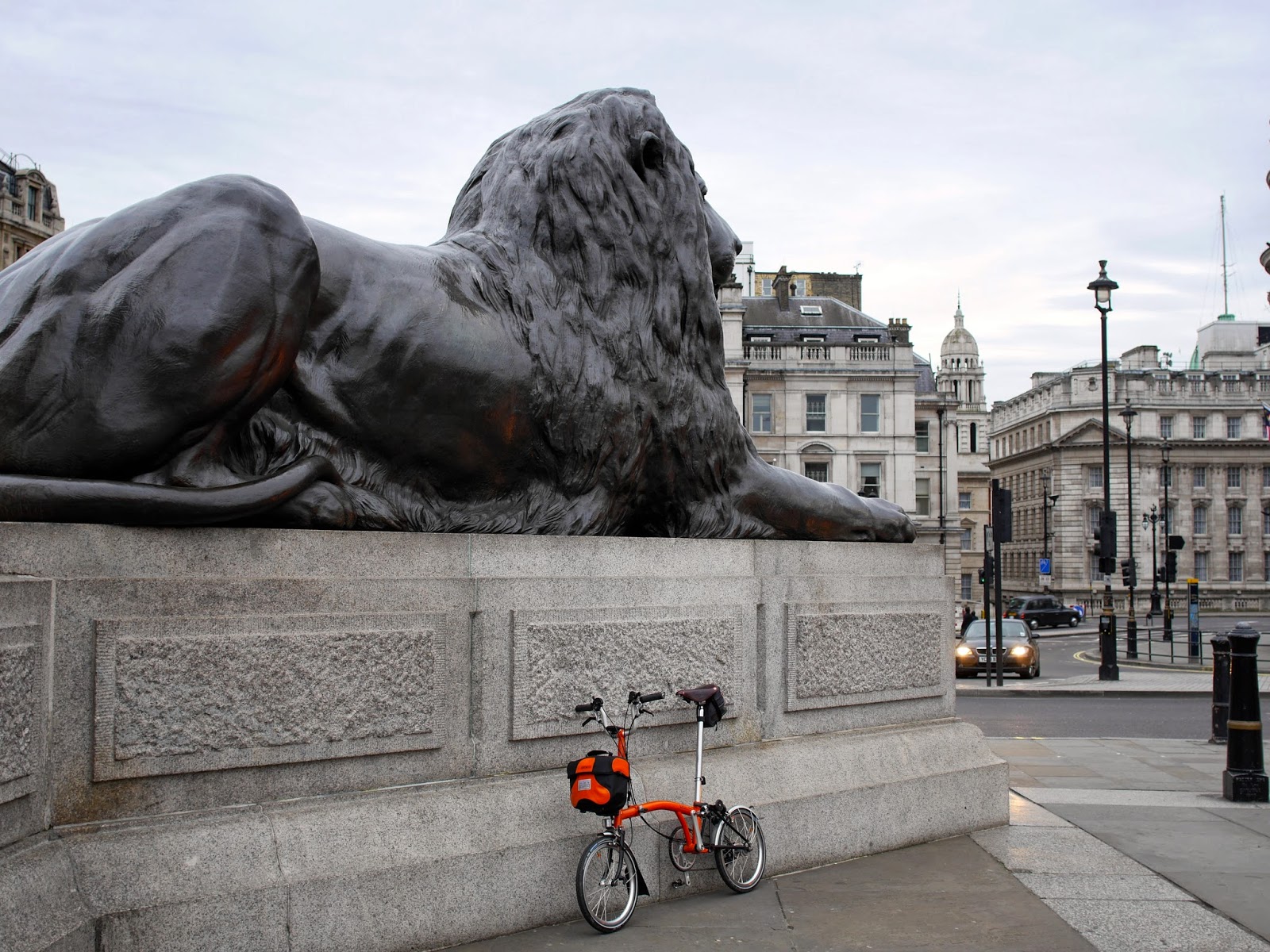 The great lion bronzes are a favourite of tourists and many can be seen clambering up to have their photograph taken as close to said lion as possible. It was perhaps this thought that caused the only other soul in Trafalgar Square to eye me suspiciously.


If you ever visit Trafalgar Square you might want to give some attention to the reliefs at the base of the column. One thing that I recall as a child at his very spot was standing with a small plastic tub of bird seed and lots of pigeons doing their upmost to eat it. All around the square were signs saying not to feed them. It then struck me that there weren't any pigeons to be seen! 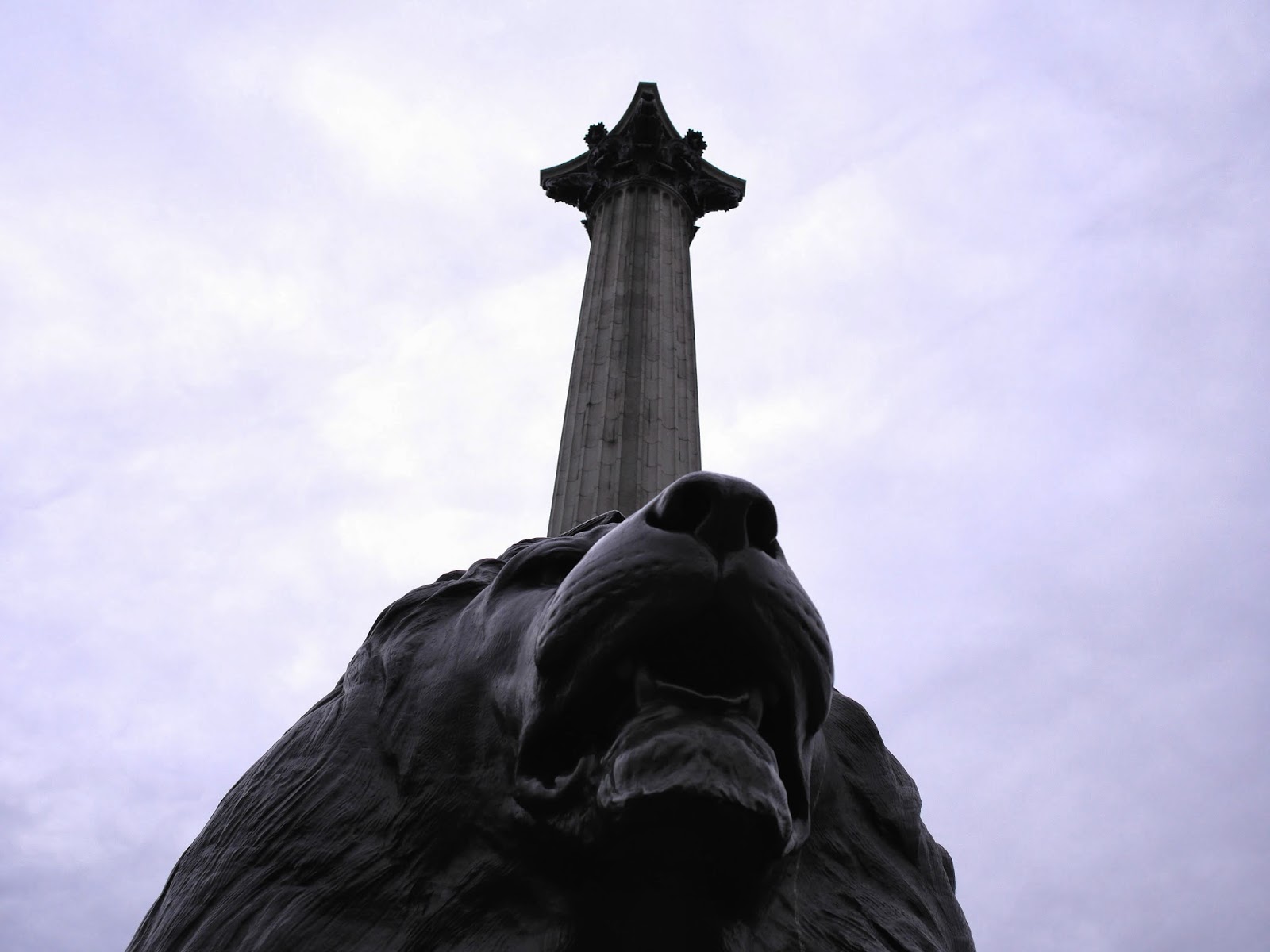 Punctual as ever Mark arrived and proceeded to enjoy the views and take his own photos. It was good to see Mark and we wasted little time in getting our respective Brompton bikes into suitably iconic poses. 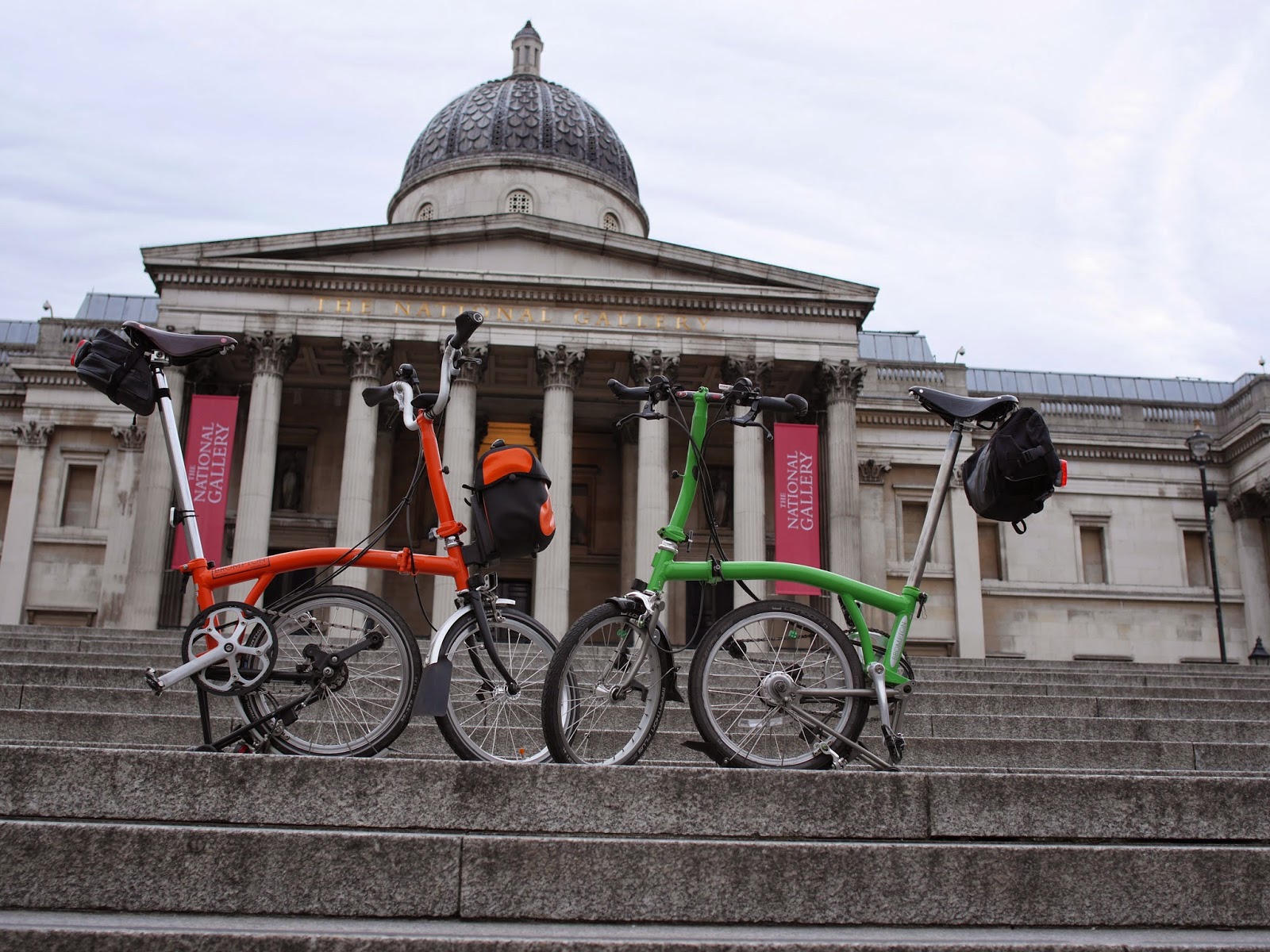 With Matt, Geoff and later Femi arriving the five of use set off. Mark had emailed me the route for my Garmin Edge 810. The course was started and a map displaying an arrow indicating the direction of travel pointed me in the right direction. I cannot say I found this easy but that is as I rarely use it. Perhaps this is something I should do more often.

Heading down The Strand the only thing I could think of was the song, 'Let's all go down The Strand.' I was rather upset that I didn't have a banana to wave around as I hummed this song.

We made good progress and before long we were seeing familiar views of Canary Wharf in the distance - very different in character to those we obtained on the recent night ride.

Part of the route took us along a canal footpath. This was a new section to Mark's very popular 'Thames Triple Chaser' and proved to be of interest in terms of the views. Anything with a river / water view has either been developed or in the process of being developed into living accommodation. Lots of industrial Victorian or earlier buildings have been given the makeover, while I imagine many more have been raised to the ground to make way for the new. 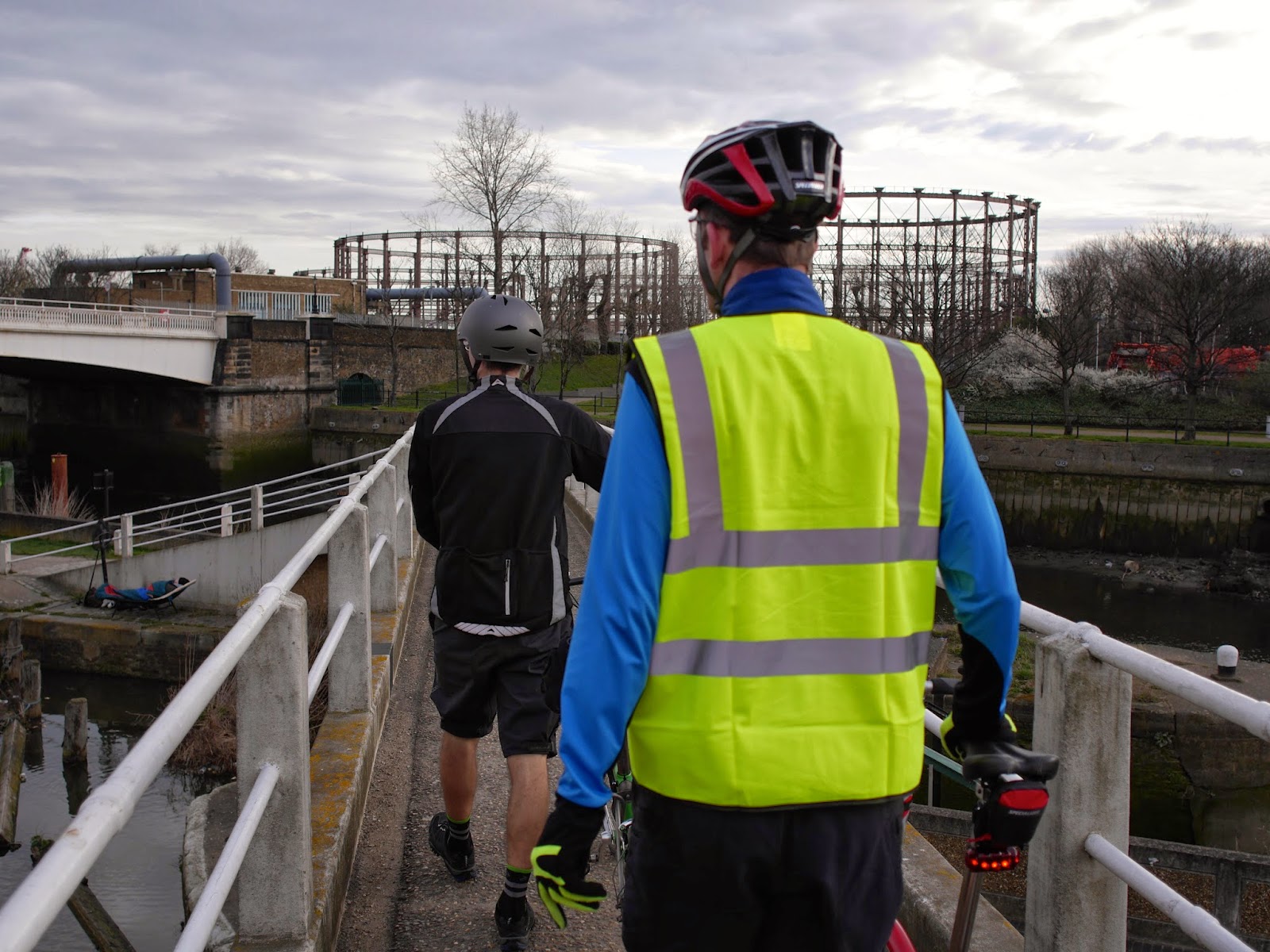 Another new part of the ride was the 'Greenway.' This a new cycle path that extends several miles all the way to Woolwich that is still in the early stages. New top soil will perhaps one day give rise to beautiful borders which one can delight in as one cycles, runs, walks along its length. 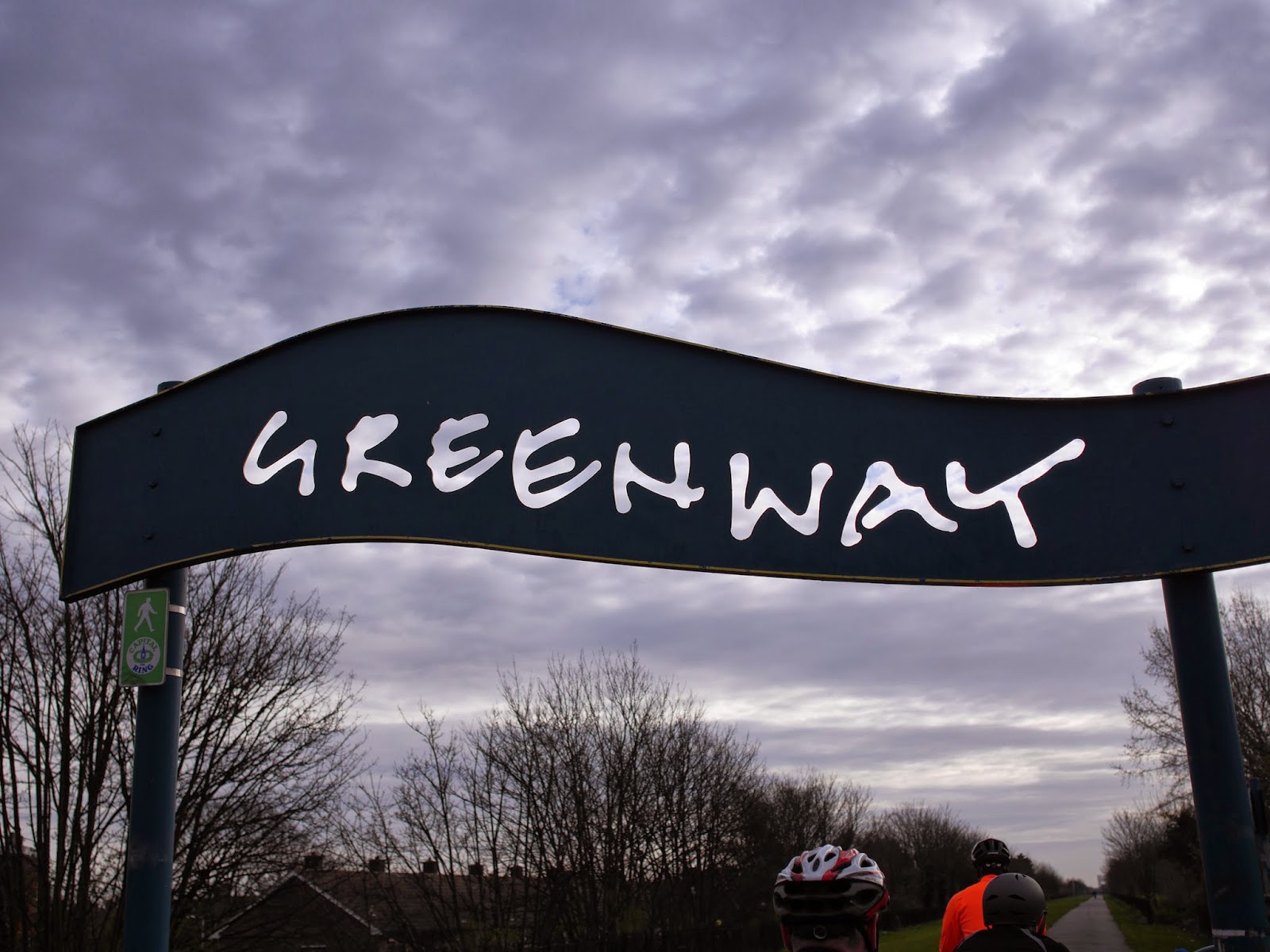 Passing Abbey Mills Pumping Station we simply had to take some photos. Designed by the genius that was Joseph Bazalgeet it was described as the cathedral of sewage. I imagine the inside to be quite spectacular.


The end of the greenway brought us to Woolwich where we boarded the free car ferry. As I took some photos of the Thames from the Ferry, a car driver enquired about our bikes. I told him about our club and some of the rides we have been on and are planning to go on. I told him we were cycling from central London to Southend on Friday night to which he replied, 'on those little wheels!'

Once off the ferry we headed past the Thames Flood Barrier. This is a stunning piece of engineering and while taking a photo of it I thought of the times it has been used in one of the rainiest winters! 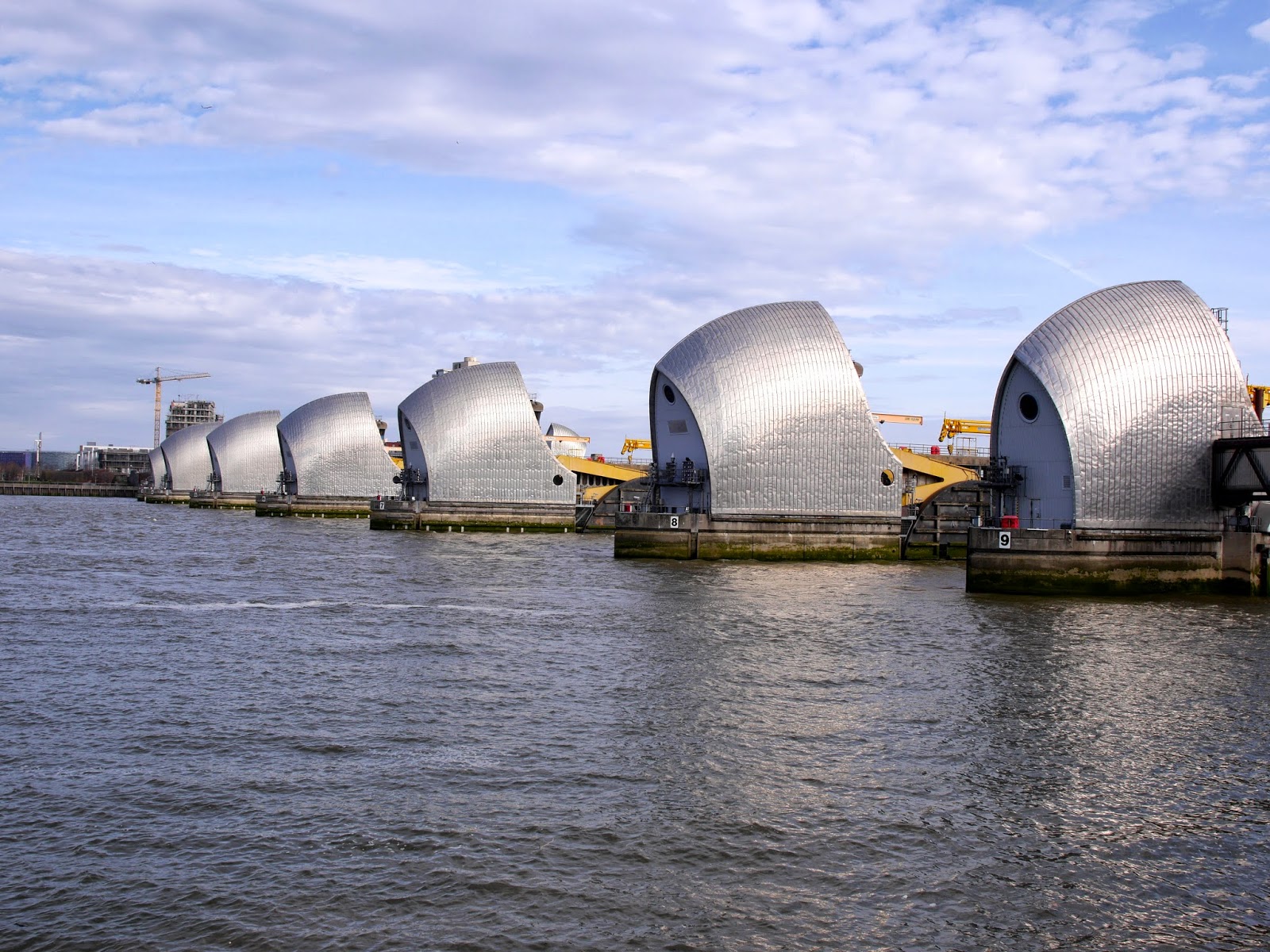 Just before the O2 building we saw the Emirates Skyline. We did not go on it today as it was a recce ride after all but will do so for the real ride. I am sure it will be great fun.


Talk turned to a coffee stop - always a preoccupation with cyclists of every persuasion. We opted for a certain establishment near the O2.

Heading back towards Greenwich we cycled over ever evolving cycle paths. When complete they will allow the opportunity to walk or cycle along the Thames. 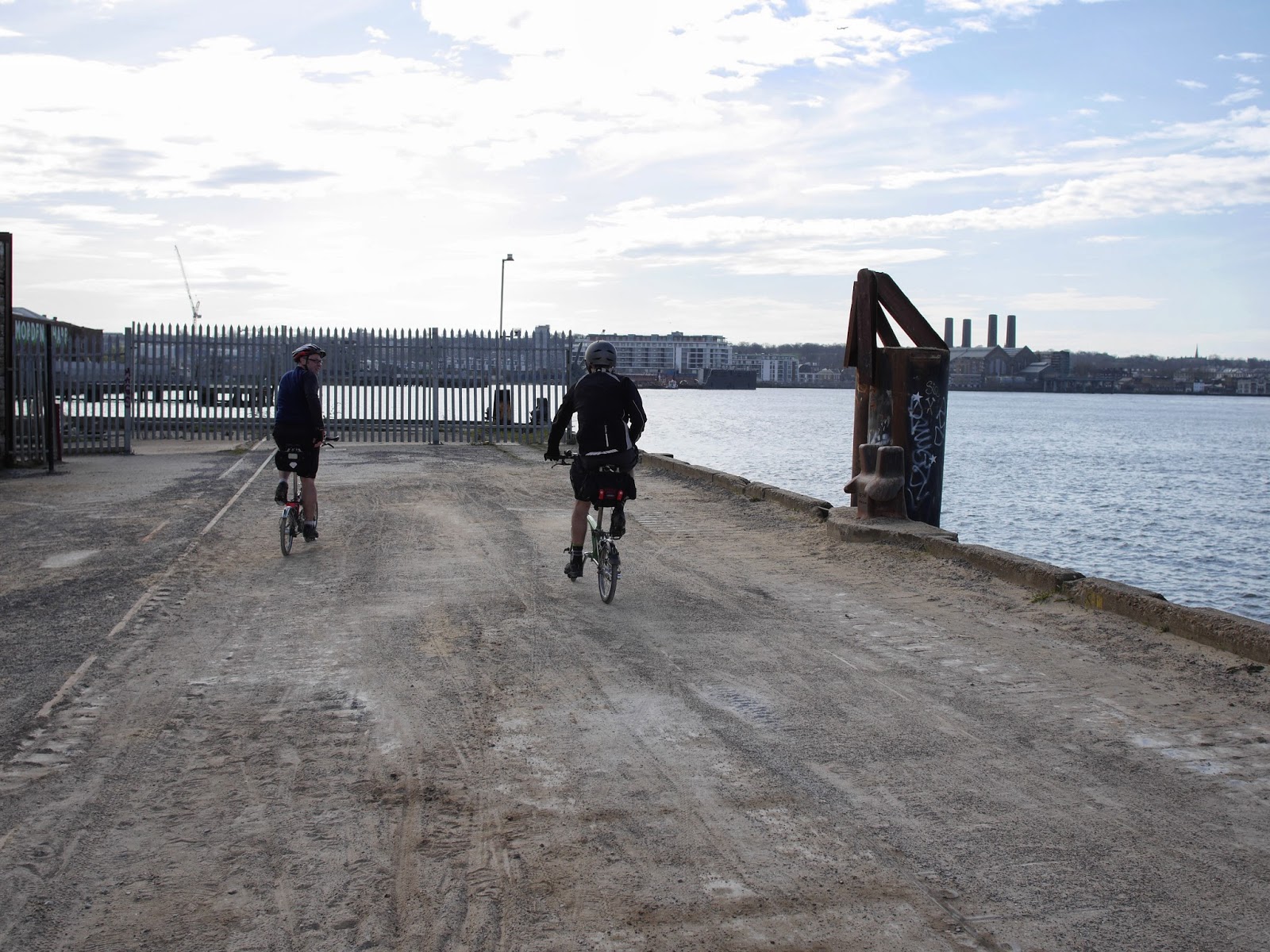 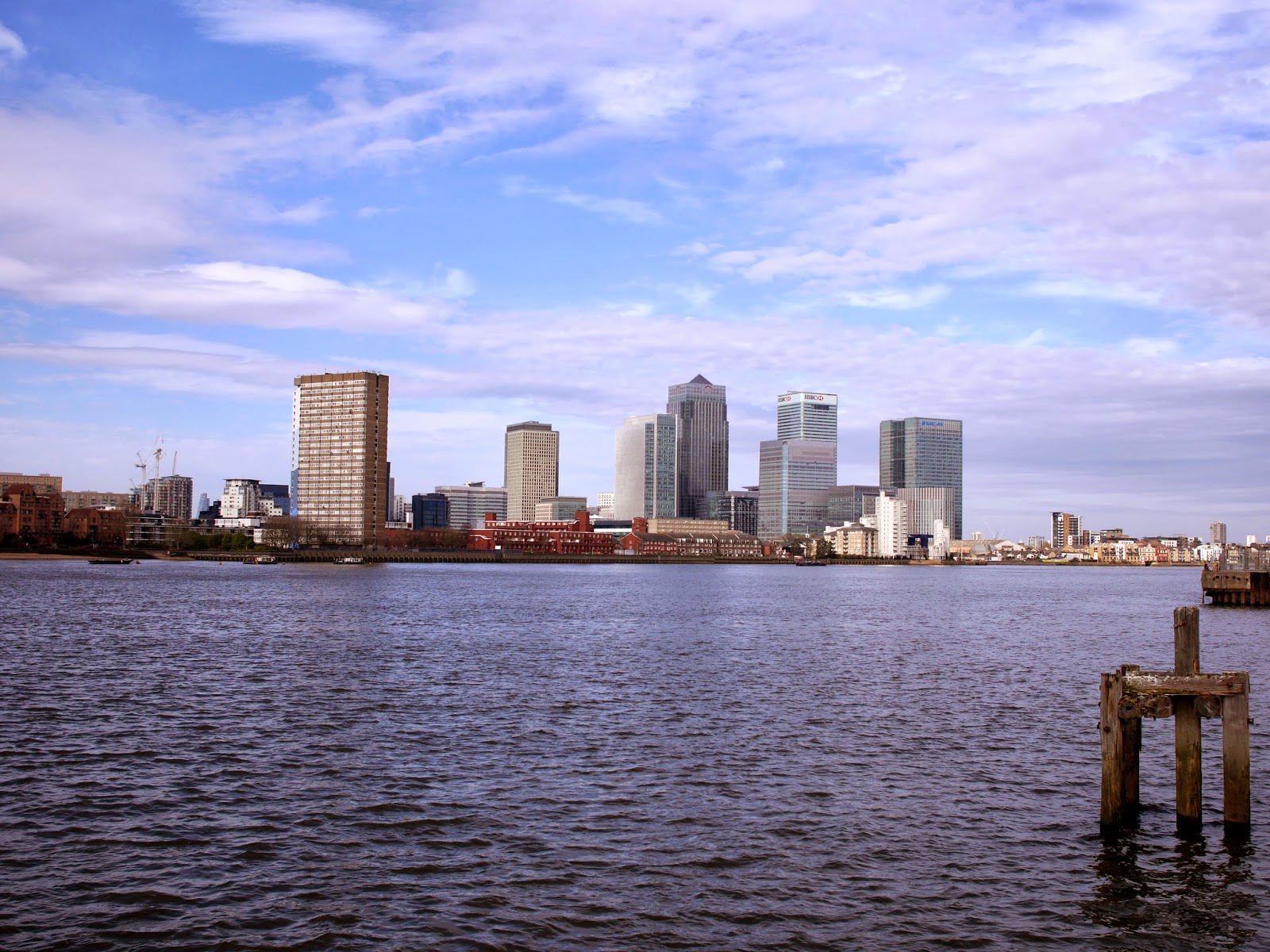 Soon we were back at Greenwich and said goodbye to Mark and Femi. Mark and I had arranged to start the ride early so that we could get back to our respective families. This worked rather well and I suspect we might do it again at some point.

Geoff, Matt and I decided to take the Thames Clipper back to London from Greenwich - mainly as it would be quicker. This is a wonderful way to travel and the views are spectacular. I always enjoy using it and would say that it you are a visitor to London you would too.

At London Bridge we said goodbye to Geoff but I will be seeing him again on our night time ride to the coast later in the week. At Embankment Matt and I said our goodbyes. I headed up towards The Pall but was caught up in a free Tibet march. This was quite a surreal moment. I was handed a flag by a very kind and gracious lady and tried to make my way to Pall Pall as quickly as I could.

Going through Hyde Park was interesting at this time of the day. There were lots and lots of people out and about making the most of the good weather. I did find it quite amusing that in the middle of the cycle path a family were sitting on a rug and tucking in to a lovely looking picnic.

This was a really good ride. I loved the start / end time and was able to get home in good time. The ride was just over 20 miles but I clocked up another 12 going to and from the start point. This 12 miles I did at a much faster pace which provided a nice little training run.

I am convinced that the best way to see London is by bicycle but better still a Brompton is King. You can fold and go on any form of public transport and simply unfold and go when you reach the other end. The great thing about seeing London by Brompton is the amount of ground you can cover. You really can get to all those places you might otherwise miss.

Next week marks the start of my cycling season proper, with lots of rides penciled in. It will start on Friday night with the ride to the coast. We have been warned about tunnels and a formidable hill. I will have to keep telling myself it will be an adventure and a good challenge! I will let you know how I get on.

The map and ride data for the recce ride can be viewed by clicking on the link below.