Friday night marked the start of the first night ride to the coast for 2014. The idea of these rides is very simple. Meet in central London just before midnight and at midnight head off for a ride throughout the early hours until you reach a coastal destination. They are beautifully pour and highly addictive.

Even though I have now been on several of these rides and knew what to expect, throughout the day this ride was in the back of my mind - a mixture of excitement and mild fear. We had been warned that our route would take us through the Rotherhithe Tunnel and over a formidable hill...

I had agreed to meet my friend Geoff a veteran of many a night ride at Charring Cross. My journey to the meet point was about 6 miles and initial thoughts were to take the tube but I cycled it instead. Arriving at Charring Cross at 22:45 I saw lots of people how had just been on a night out catching their trains home and many more about to start their nought out.

People watching on a Friday night at Charring Cross is always an interesting pastime. I received several comments about how cool my Brompton was and two proposals of marriage. Thankfully, Geoff was bang on time and we were soon off to the official meet point for the ride - Hyde Park Corner. 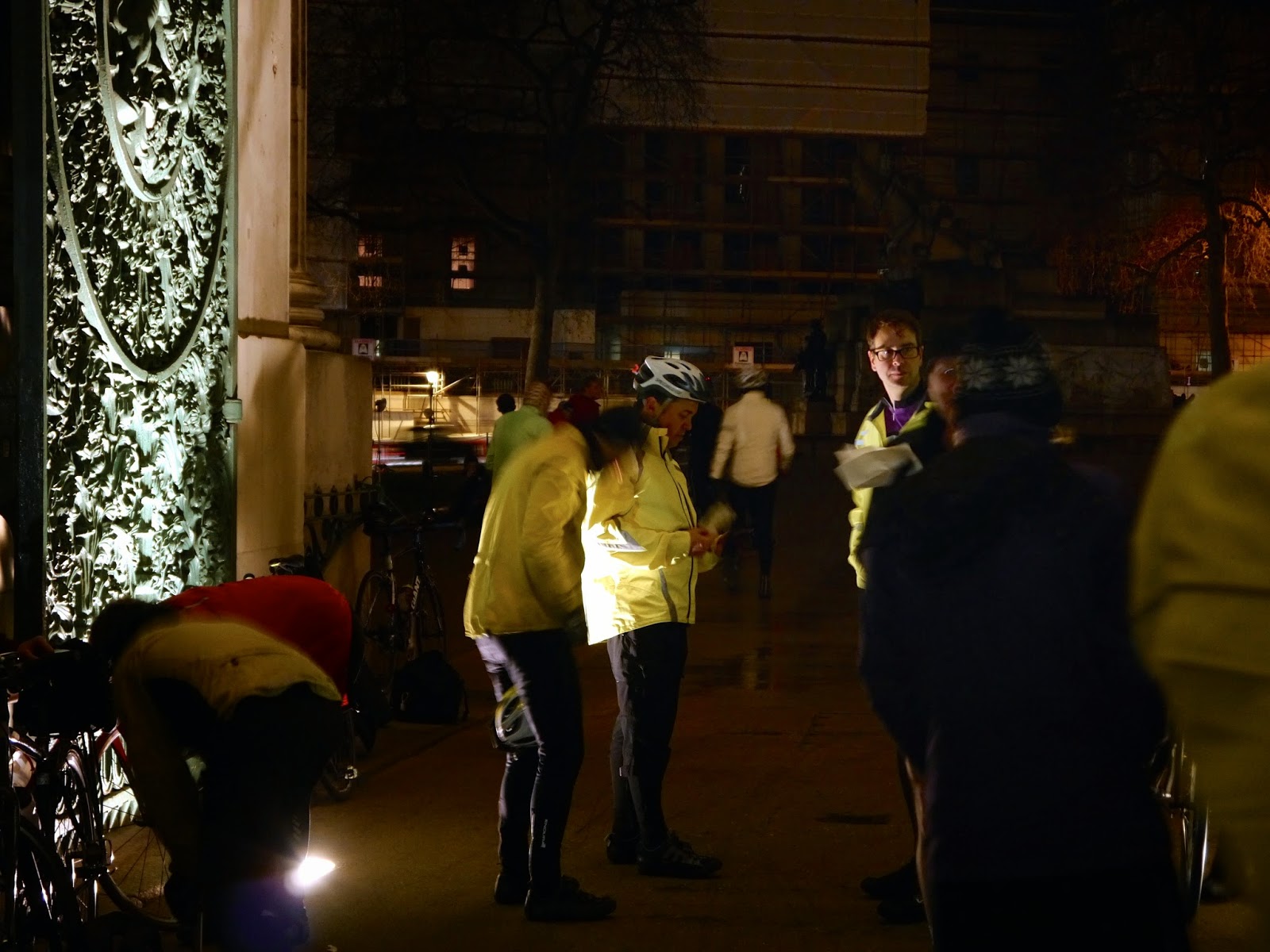 At the meet point we were joined by David, Anne, Charlie, Amanda (on her road bike) and Bob. The rain was already falling and as we chatted it progressively got worse to the extent that I donned my waterproof over trousers.

There was a calm buzz of excitement as Simon the leader of this ride went through the ever important safety instructions but in the usual fun way where participant join in. With talk the of the Rotherhithe Tunnel and hills there were a few nervous smiles exchanged and at the stroke of midnight we were off. 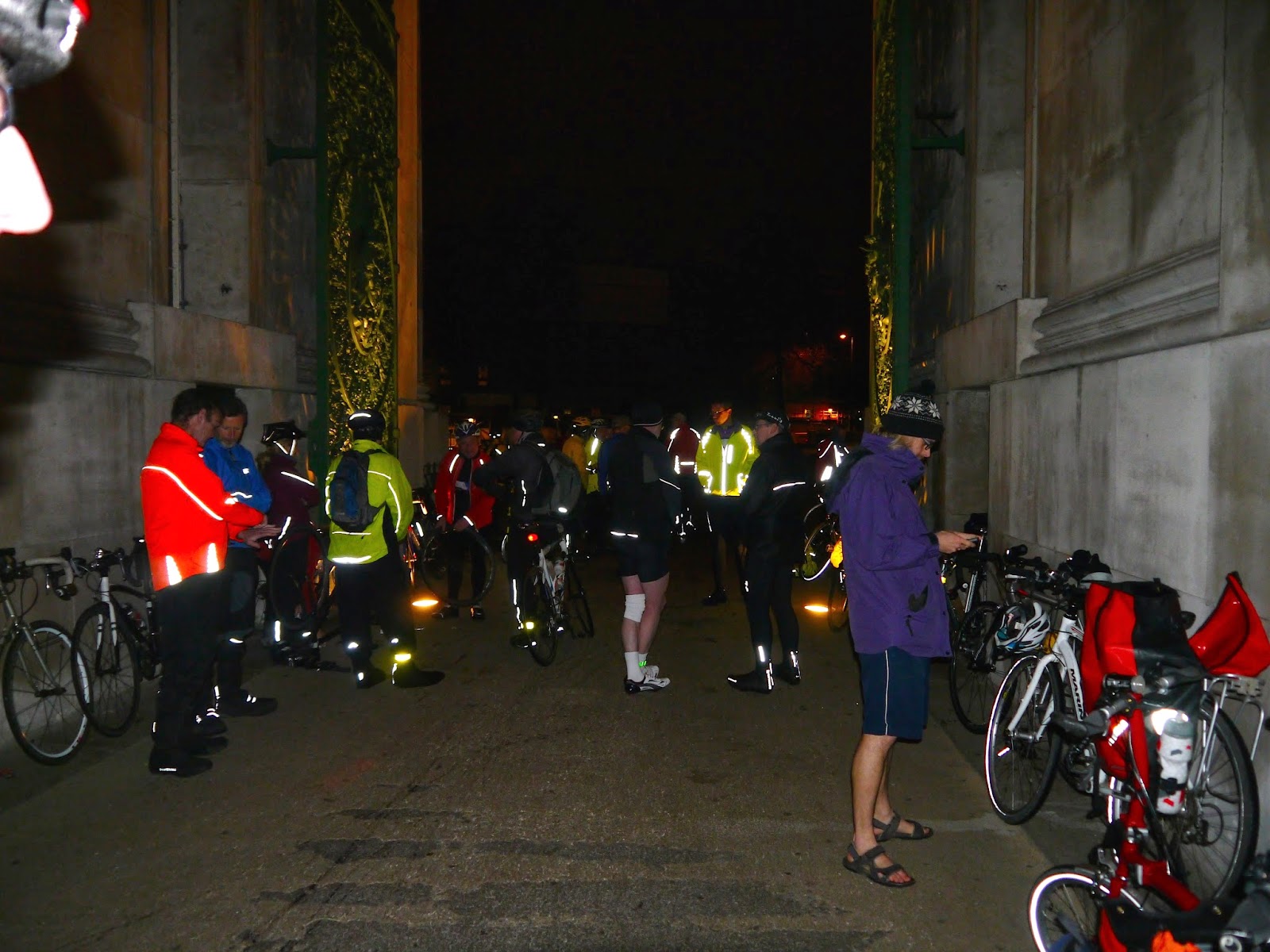 The familiar sound of more than 60 riders clipping in was a wondrous noise that seemed orchestrated to perfection. A snaking peloton of all manner of bicycles made their way through the central London traffic, bound for Burnham on Crouch some 58 miles away. As we passed pedestrians, motorists and even other cyclists I wondered whether they knew or would even believe what we were embarking upon?

The rain was heavy at times and the night air decidedly chilled. I was glad of the many layers I had worn. The dreaded Rotherhithe Tunnel was reached a great deal sooner than I had expected and as I saw the entrance I was induced to make an involuntary swallow.

The Rotherhithe Tunnel is a road tunnel under the River Thames opened in 1908. It consists of a two lane carriageway 1,481 metres long and travels to a maximum depth of 23 metres. A pedestrian walkway runs parallel to the carriageway and we were told beforehand to make for it if there were any punctures or mishaps.

This tunnel is not for everyones liking. Frequently motorists with claustrophobic tendencies who have not used it before are caught out and have to be rescued by emergency crews. The only thing I was worried about was cars travelling adjacent to us cycling along. Luckily this didn't happen. We cycled through quite quickly and traffic seemed to be light. I was glad for this as it was towards the end getting unpleasant. The car fumes were noticeable and I longed for the night air and liberation. Once on the other side we regrouped, took in a few lungfuls of fresh air and were off again.

The rain was constant and combined with strong winds made for tough cycling at times. Normally on these rides we have a mid-ride stop off at various locations that open especially for us with lots of homemade goodies. Unfortunately this could not be arrange of this ride so our stop off was Junction 31 of the M25.

There wasn't much in the way of food and most of us brought our own. It wasn't as good as the small church halls or scout huts we normally frequent but it was warm and spacious. I sat next to Bob - a great character and pretty potent Brompton rider -  and chewed the fat.

Descending downstairs to the toilets was quite a sight as many riders attempted to dry various items of clothing and warm body parts on the hand dryers. I even got some of the action as perhaps like a flamingo I stood on one leg trying to dry my knees.


Every time I have set off after the mid ride break I have been frozen to death. This time I decided to put on one extra layer. I am glad that I did. No sooner that we stepped outside I started to feel the cold but not half as bad as I would have without that extra layer.

The next few miles saw us building up to the hill we had been warned about and with good reason! As we approached it in near darkness you could see that it looked pretty steed. As I progressed on my ascent I soon bottomed out on my gears but had a nice little rhythm going. Of course this didn't last.

I started to pass a few people and saw that it had caught out quite a few riders who were off the bike and walking. This proved to be my downfall. I was hugging the wheel of one rider who understandably and without warning stopped and got off the bike. Unable to react in time to cycle I unclipped and was off my bike too. I walked 10 paces before getting on and cycling the rest. By my own standards the hill beat me - even if by default. 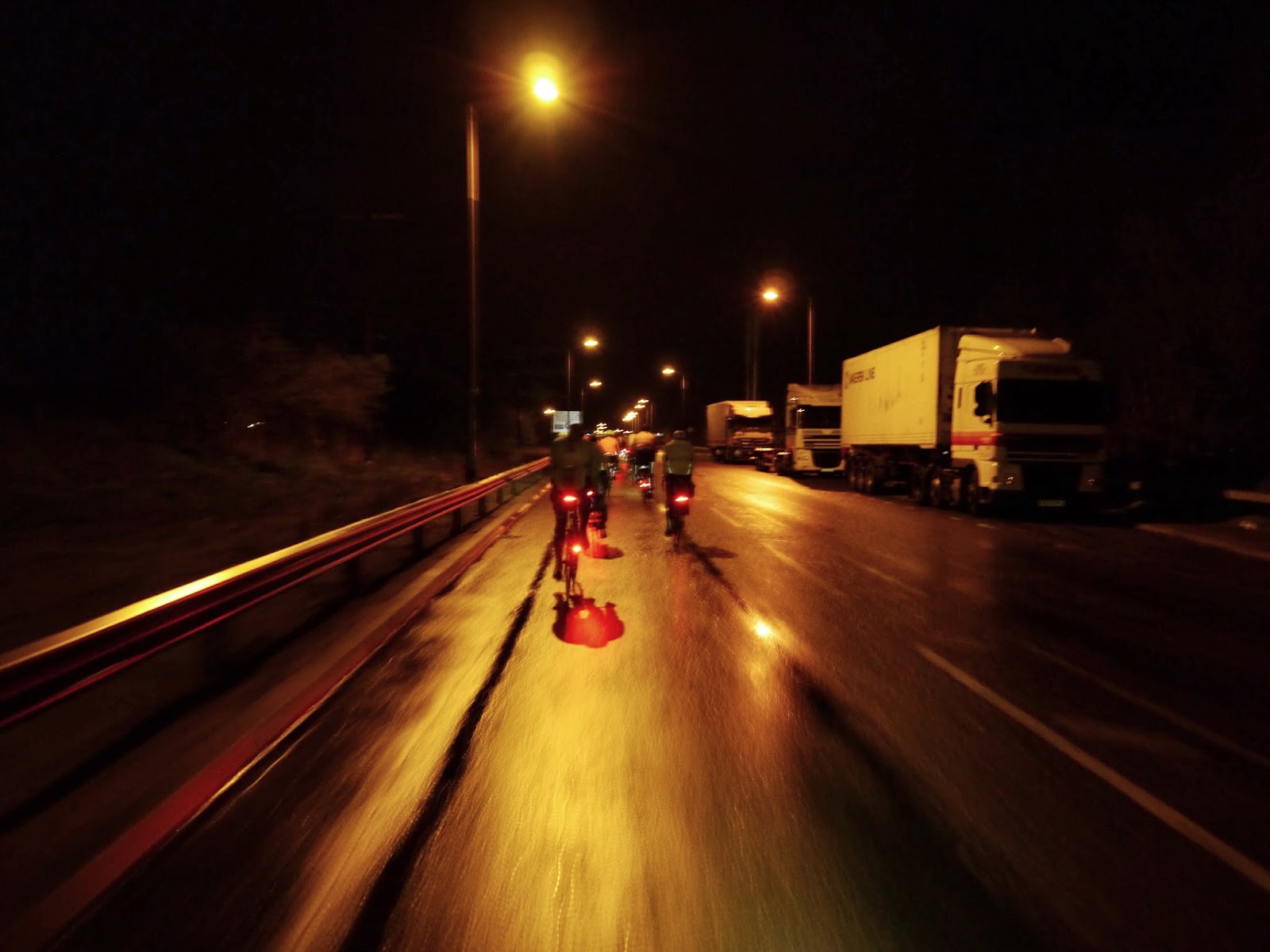 With dawn approaching cycling through the British countryside was glorious. It is perhaps one of the features of these rides. The only sounds to be hear apart from that made by various bicycles were birds getting ready for the dawn chorus. It is a sound I have heard many times but always welcome. 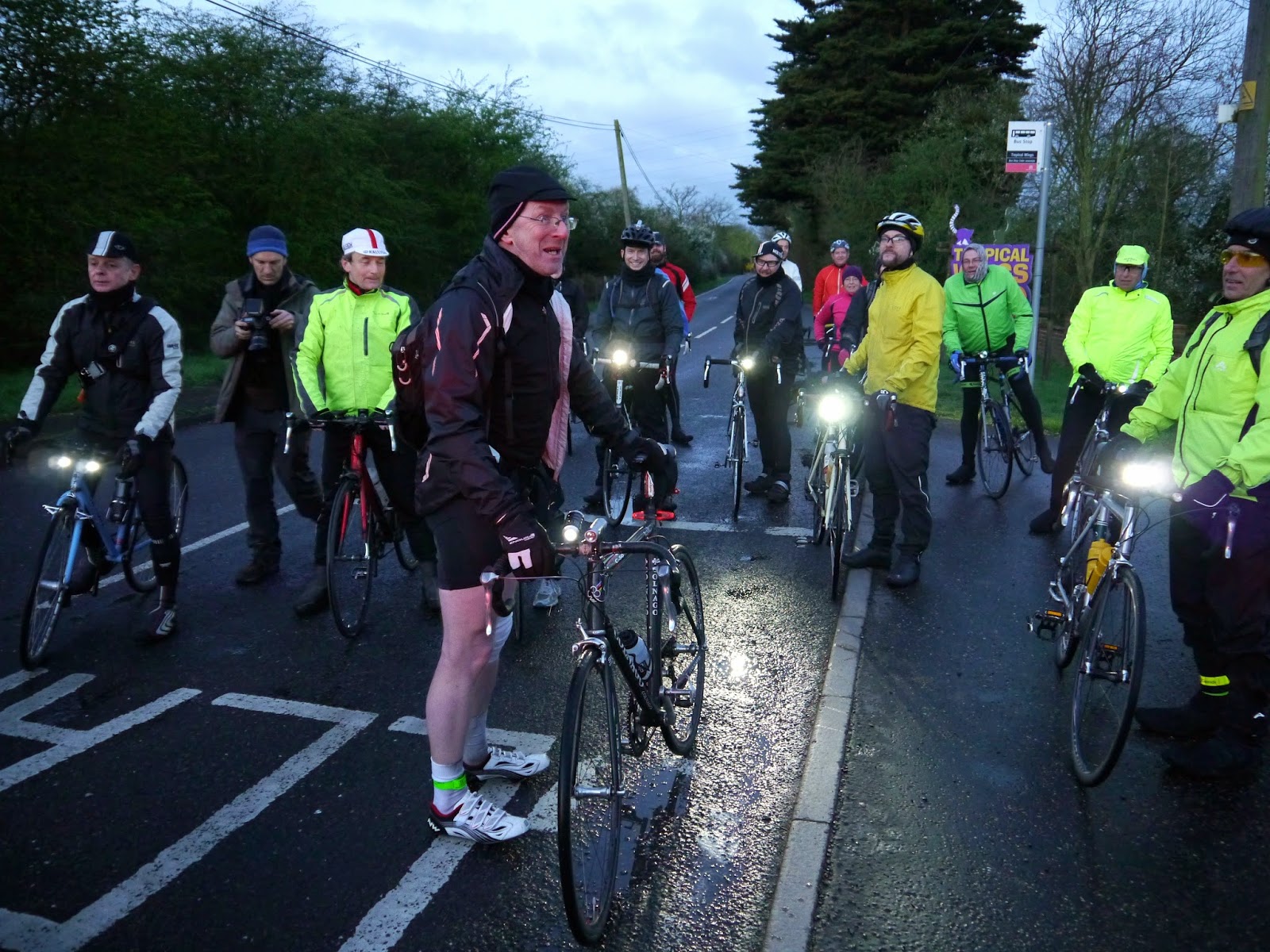 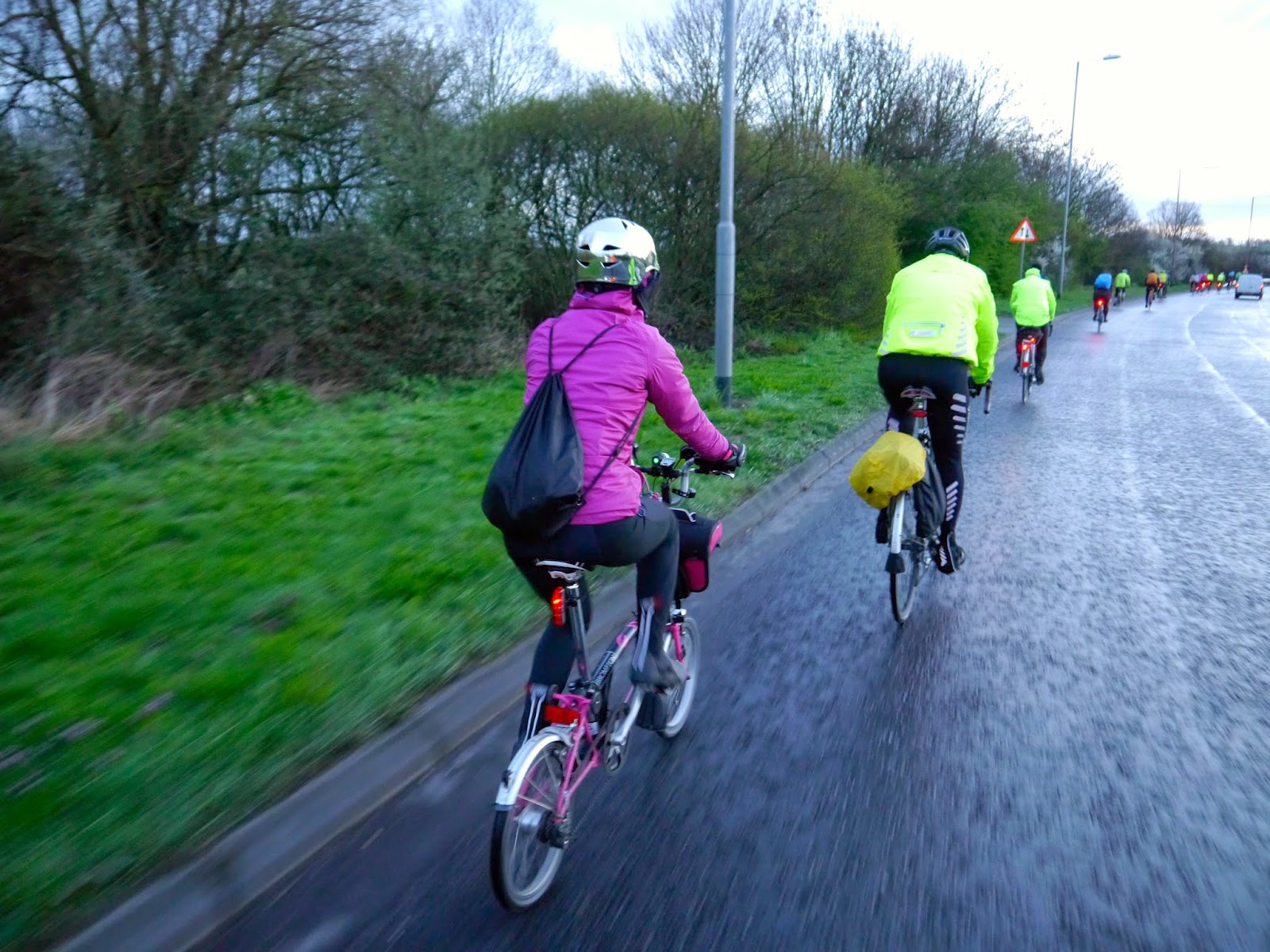 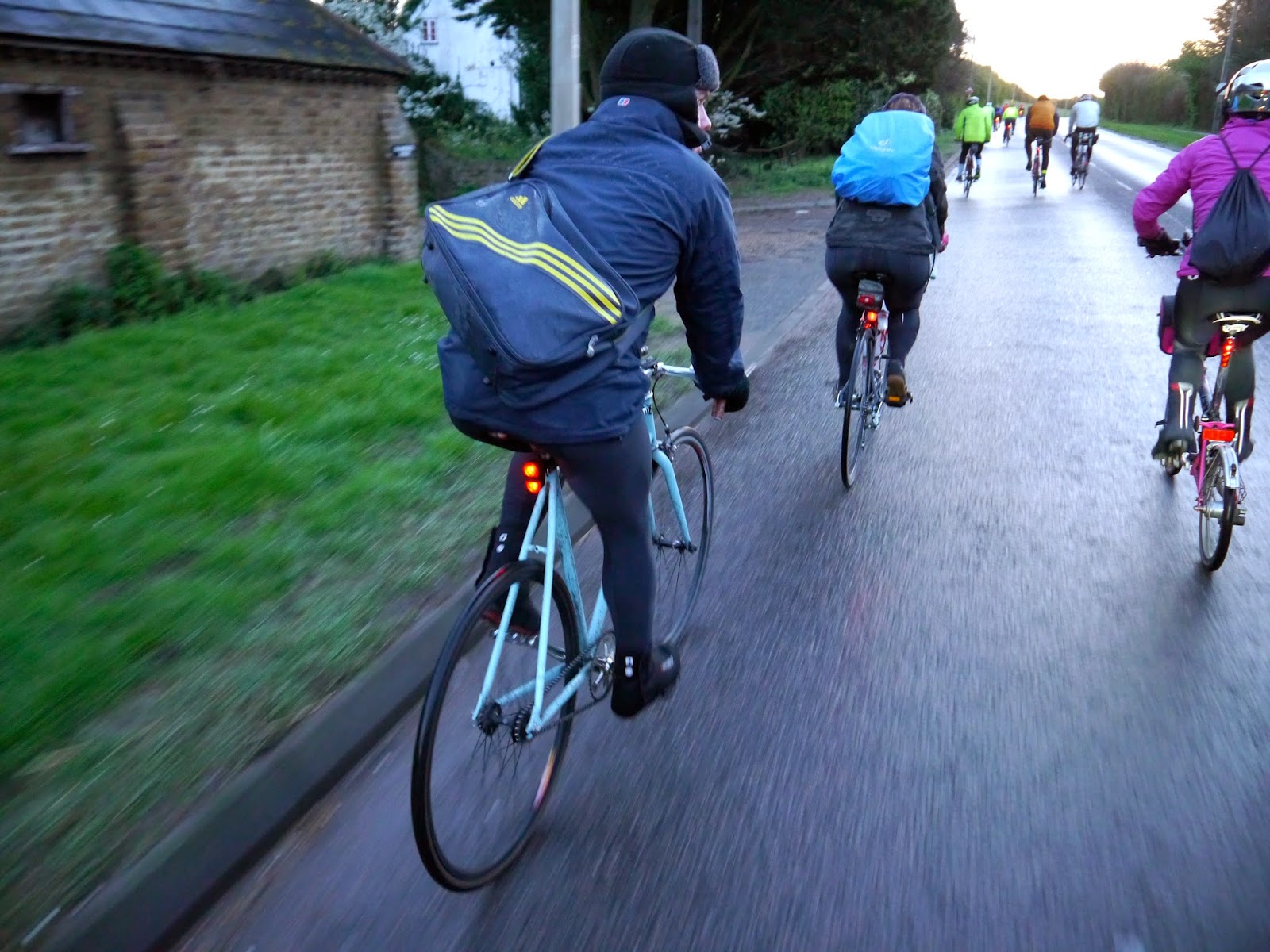 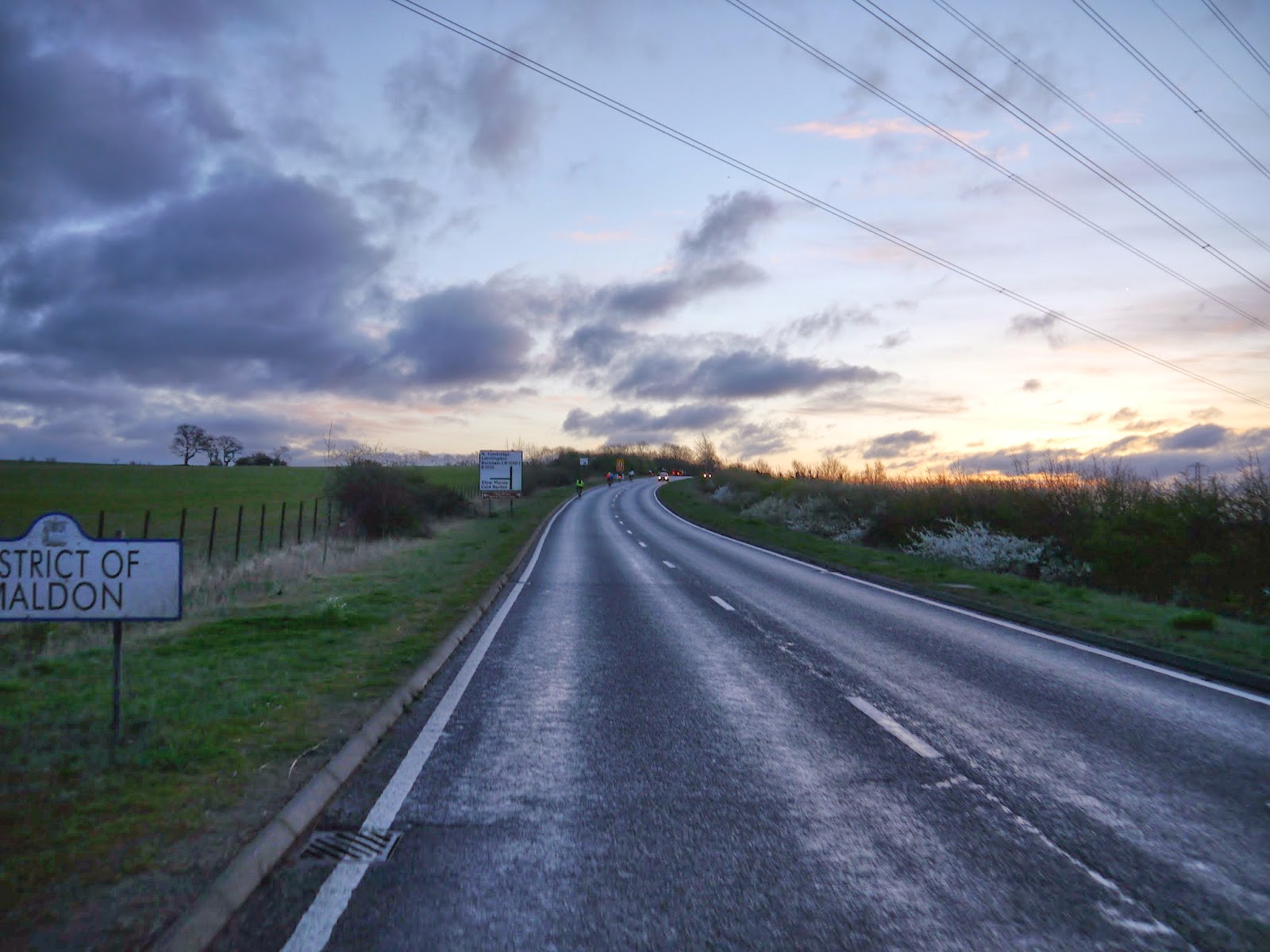 With the back of this ride broken and only a few miles left until we reached the end and a well earned breakfast we cycled with purpose. Those of Brompton bicycles yet again put in a good performance. Bob was frequently at the front of the pack as was David, Anne and Geoff. Anne will be taking part in the ride 100 later in the summer and although not riding on her Brompton I suspect she could!! 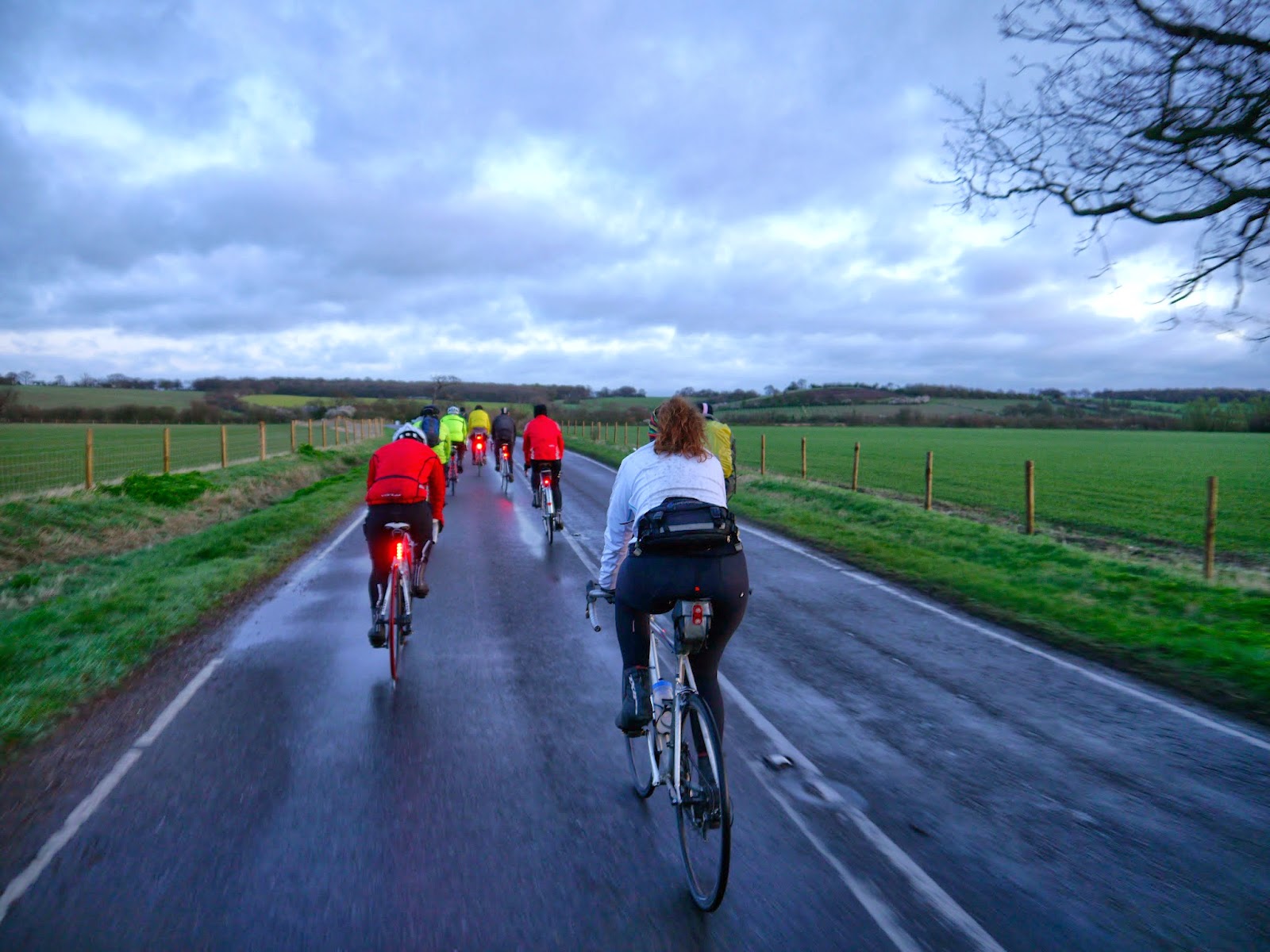 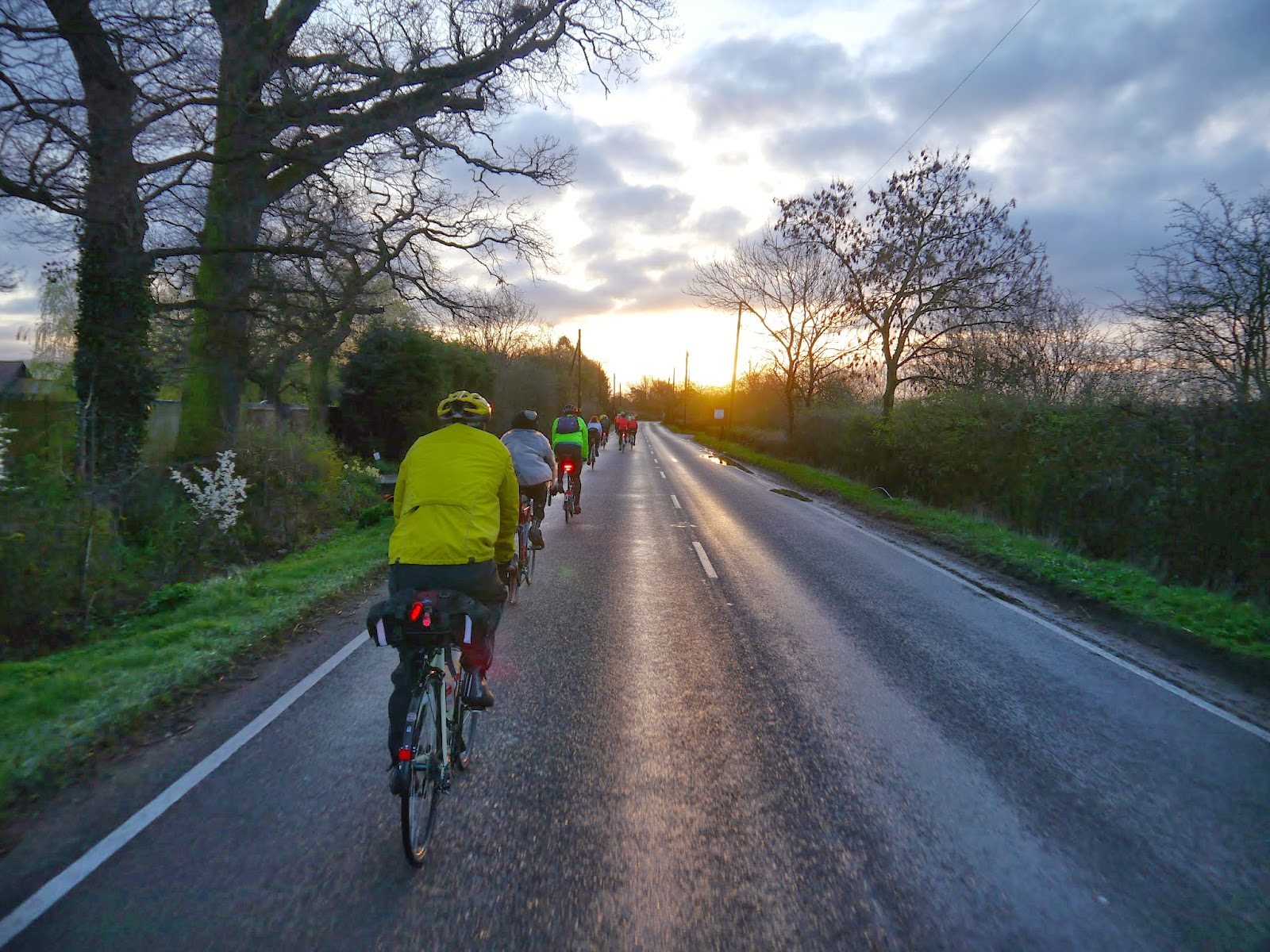 Arriving at 'The Cabin Dairy' in Burnham on Crouch an order was placed for their 'Full Monty' breakfast which was well worth the wait. 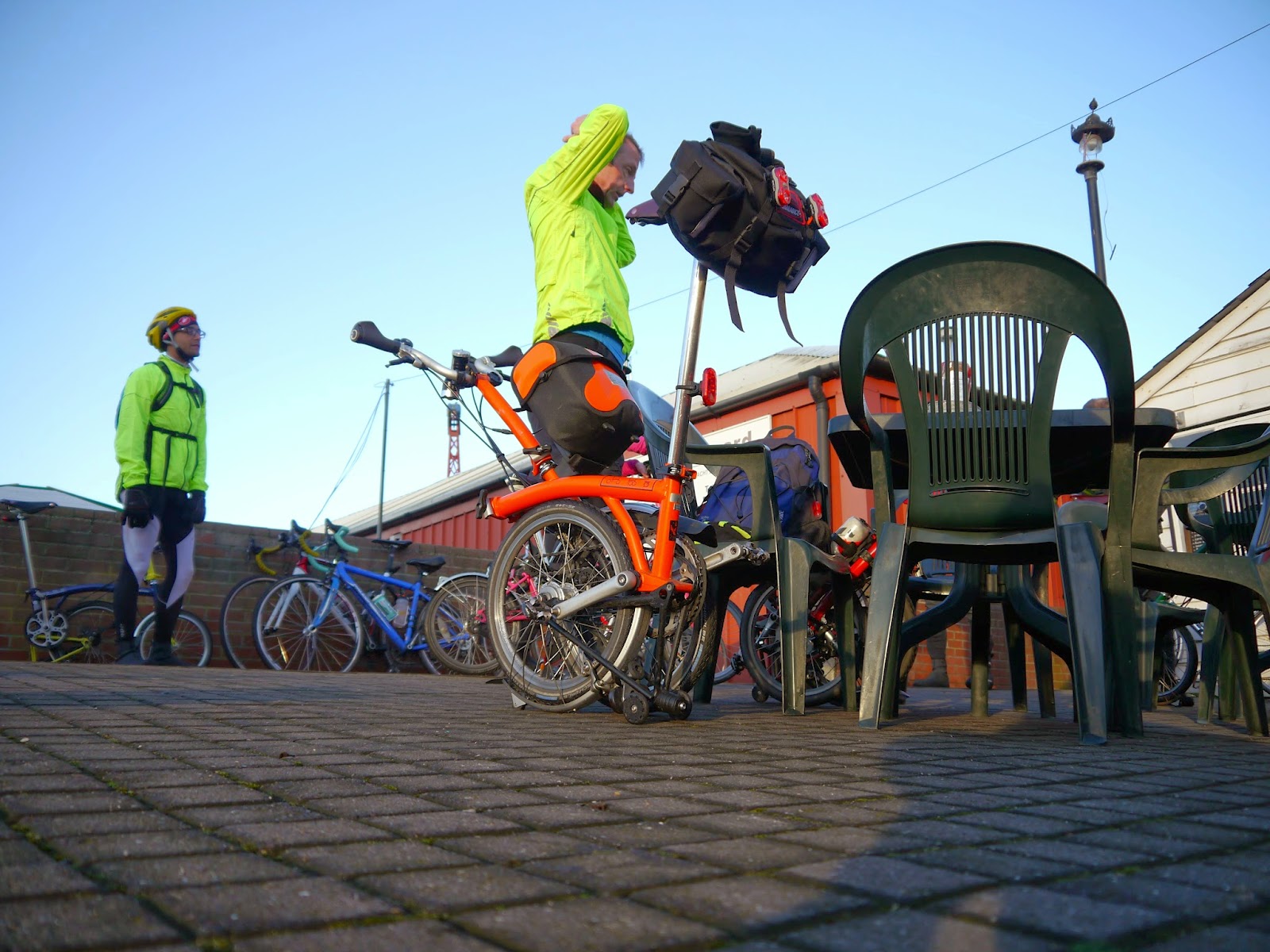 Many of us were wet from all the rain and a few riders were felling very cold. My hands and feet felt like blocks of ice but after the breakfast felt better. 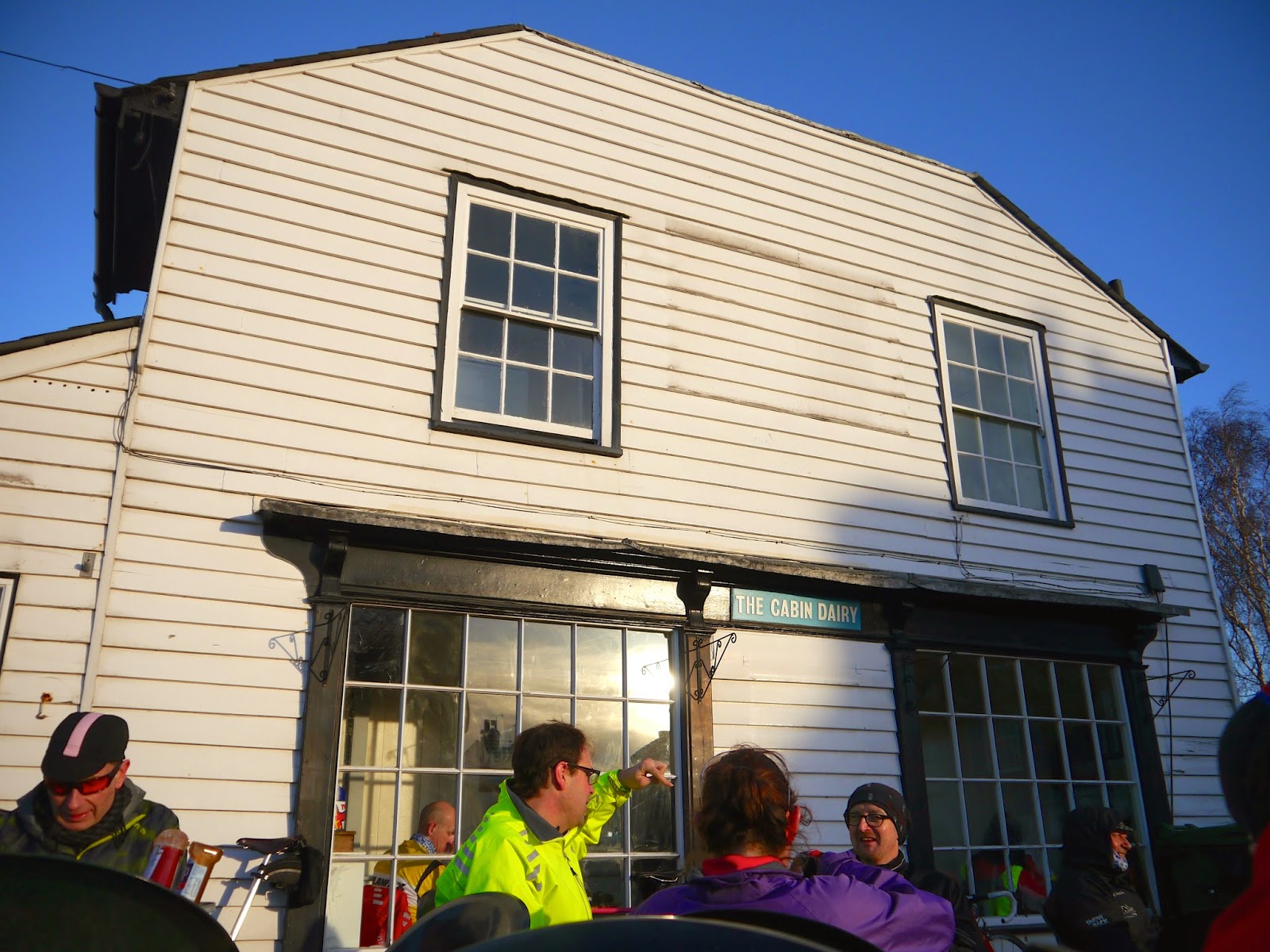 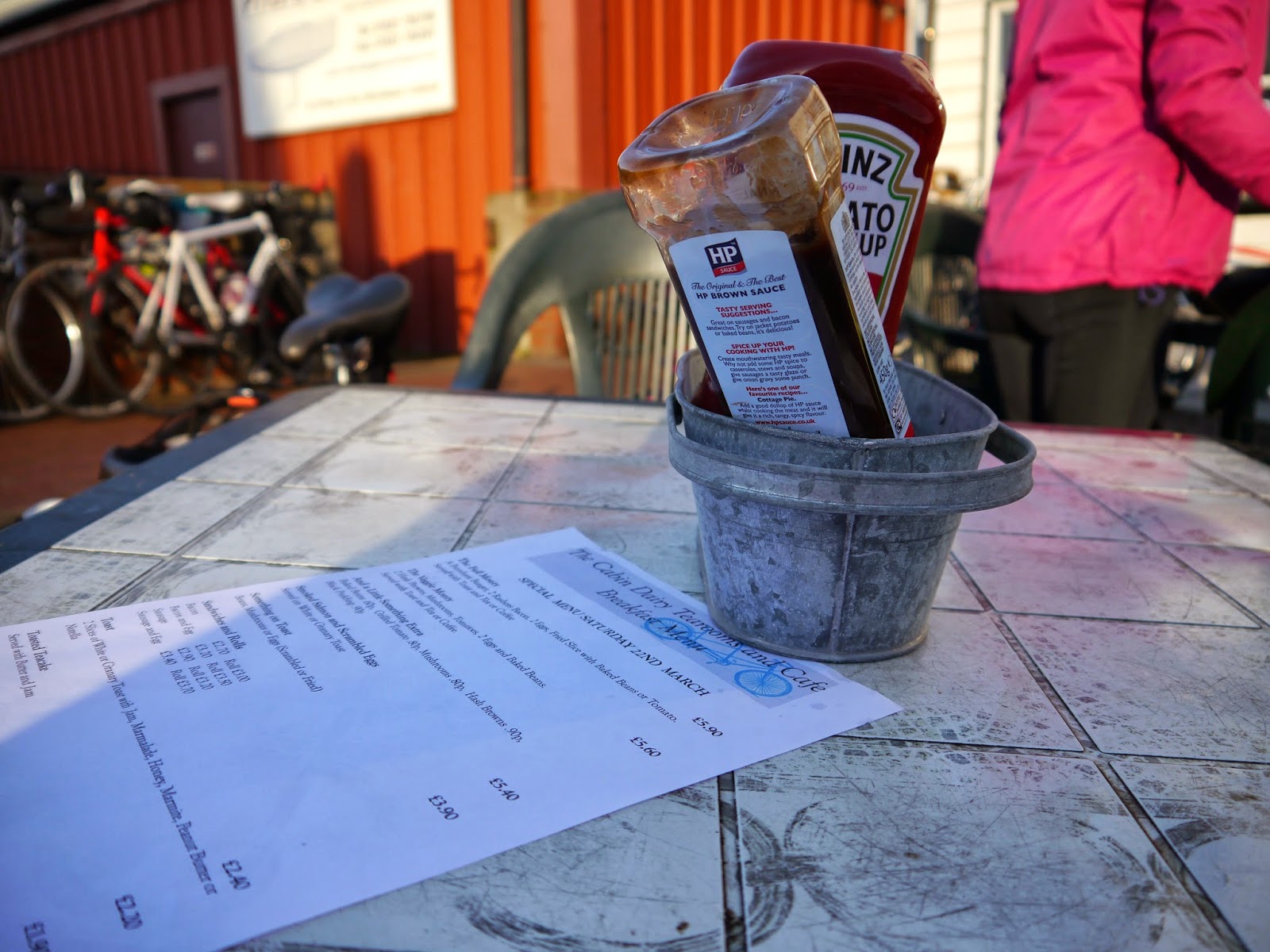 With breakfast over many riders started to say their goodbyes and head for home. It was my intention to get the boat across the River Crouch and cycle to Southend with Geoff and get the train from there as this would forgo changing trains and would be more of an adventure. Unfortunately, this service started at 10:00 and not wanting to wait Geoff and I headed for Burnham on Crouch station for there train to Wickford. 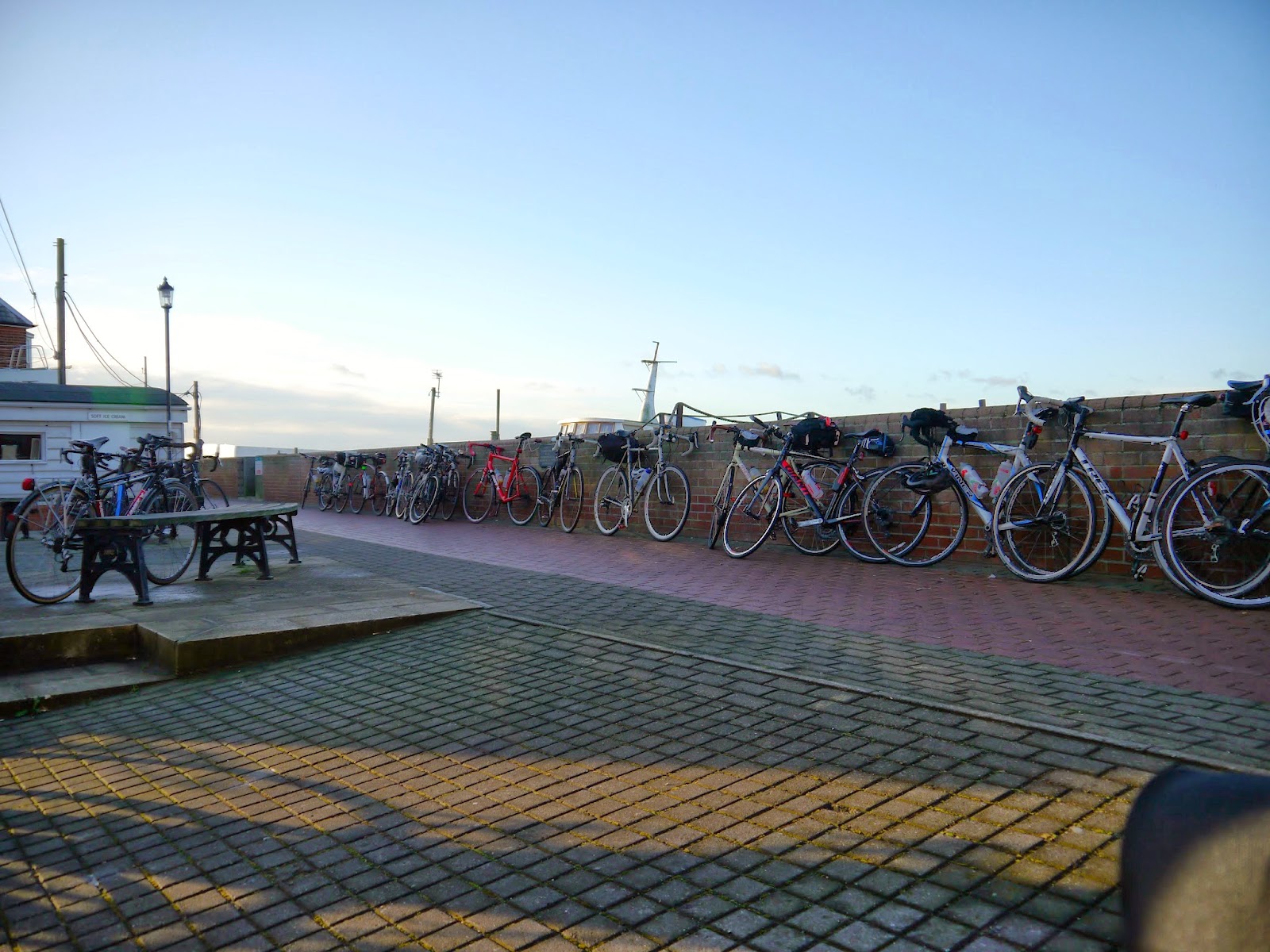 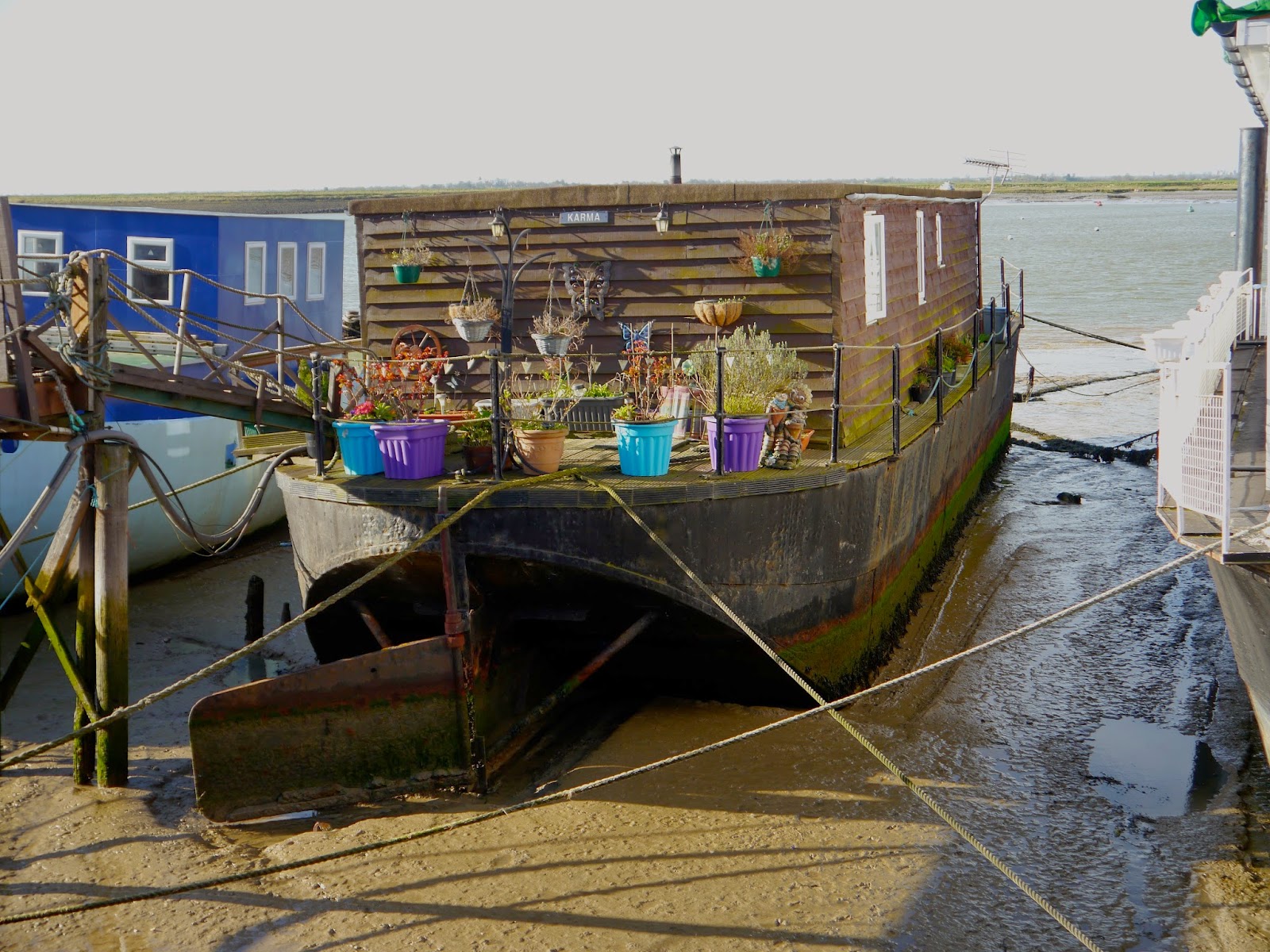 At Wickford I took the train to Liverpool Street while Geoff (on the opposite platform) took the train to Southend. Arriving back in London at just before 10:15 I felt pretty good considering I had cycled through the night. Seeing some familiar buildings I headed for them to take a few more photos of them. 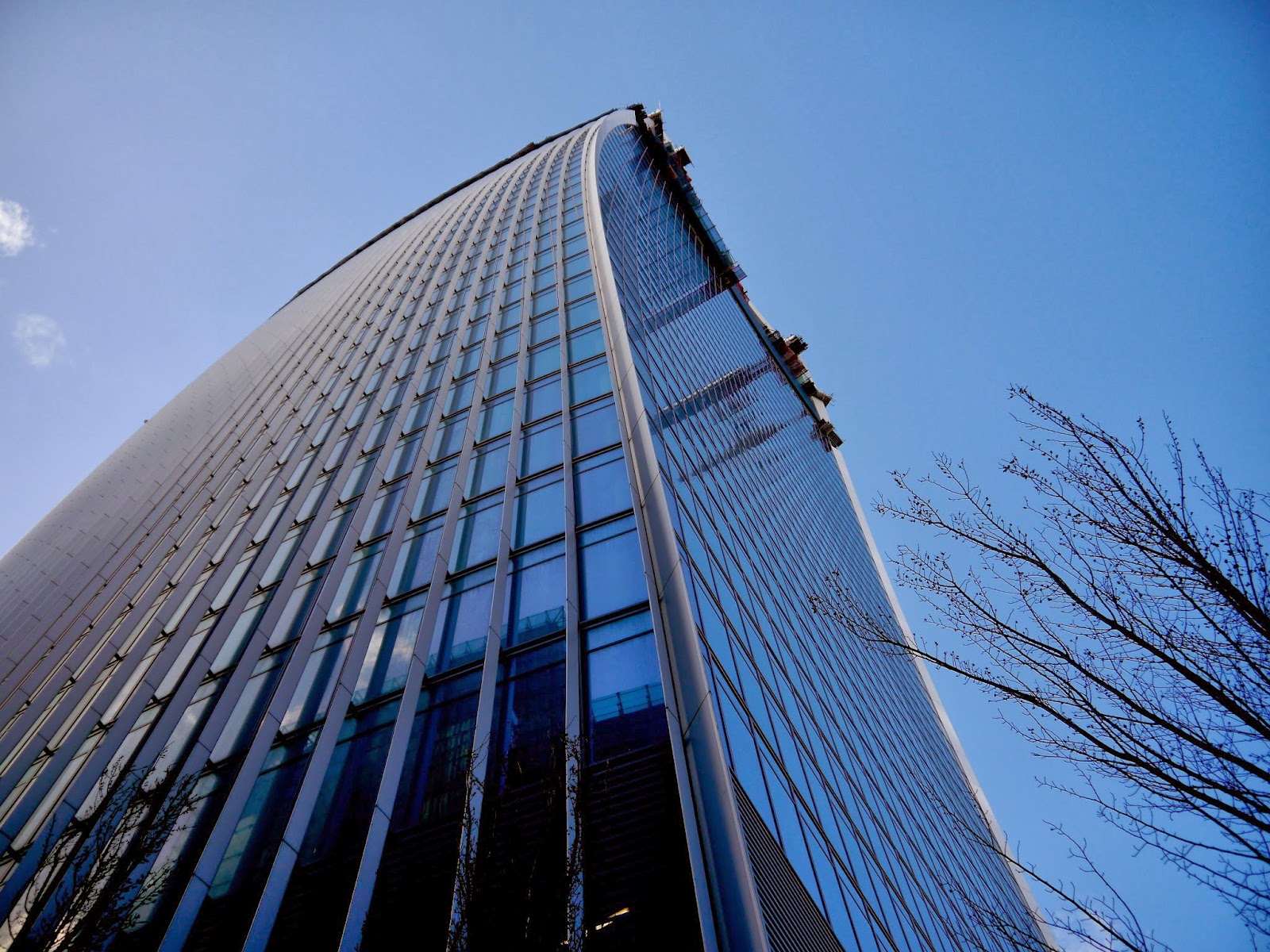 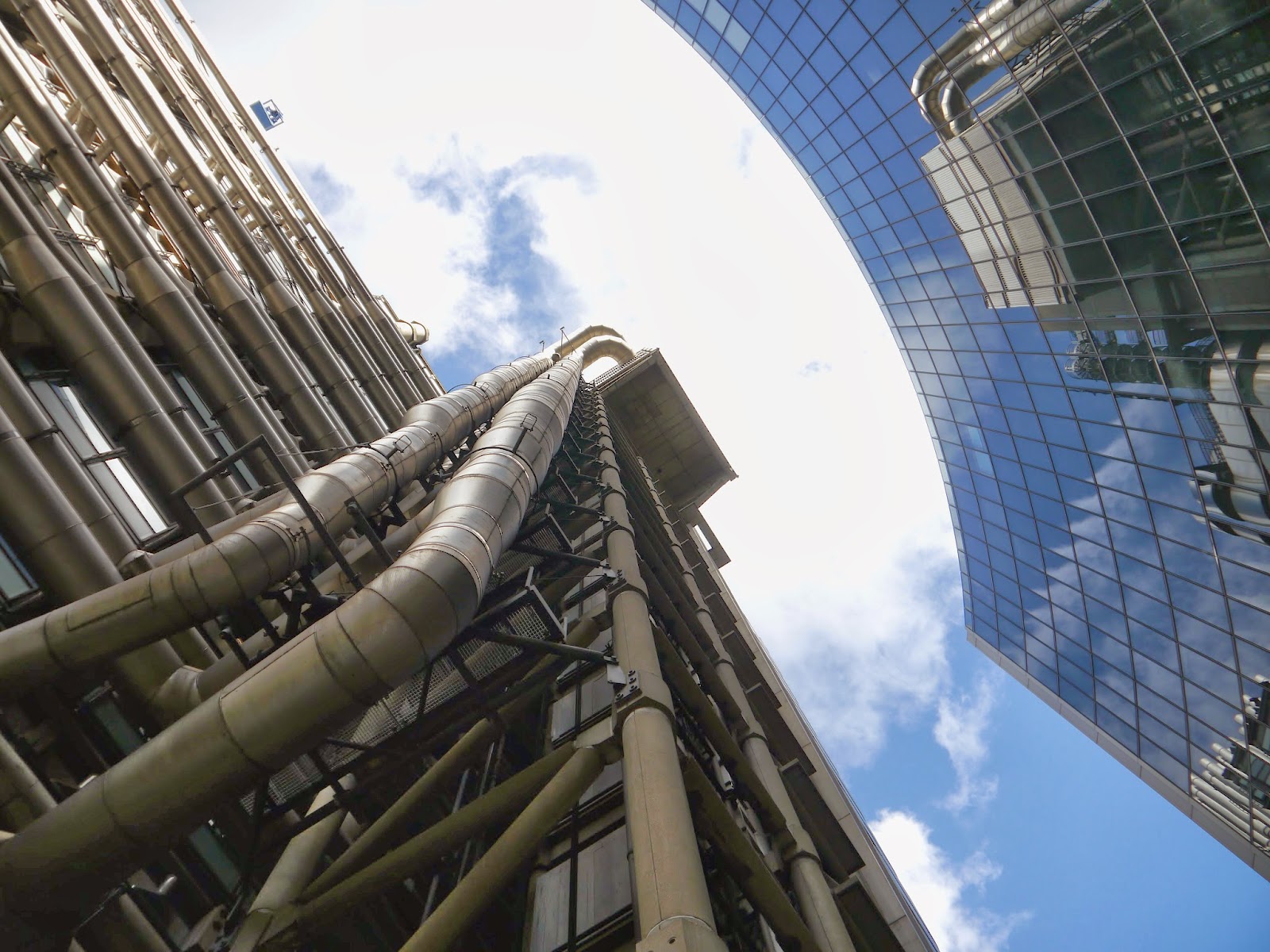 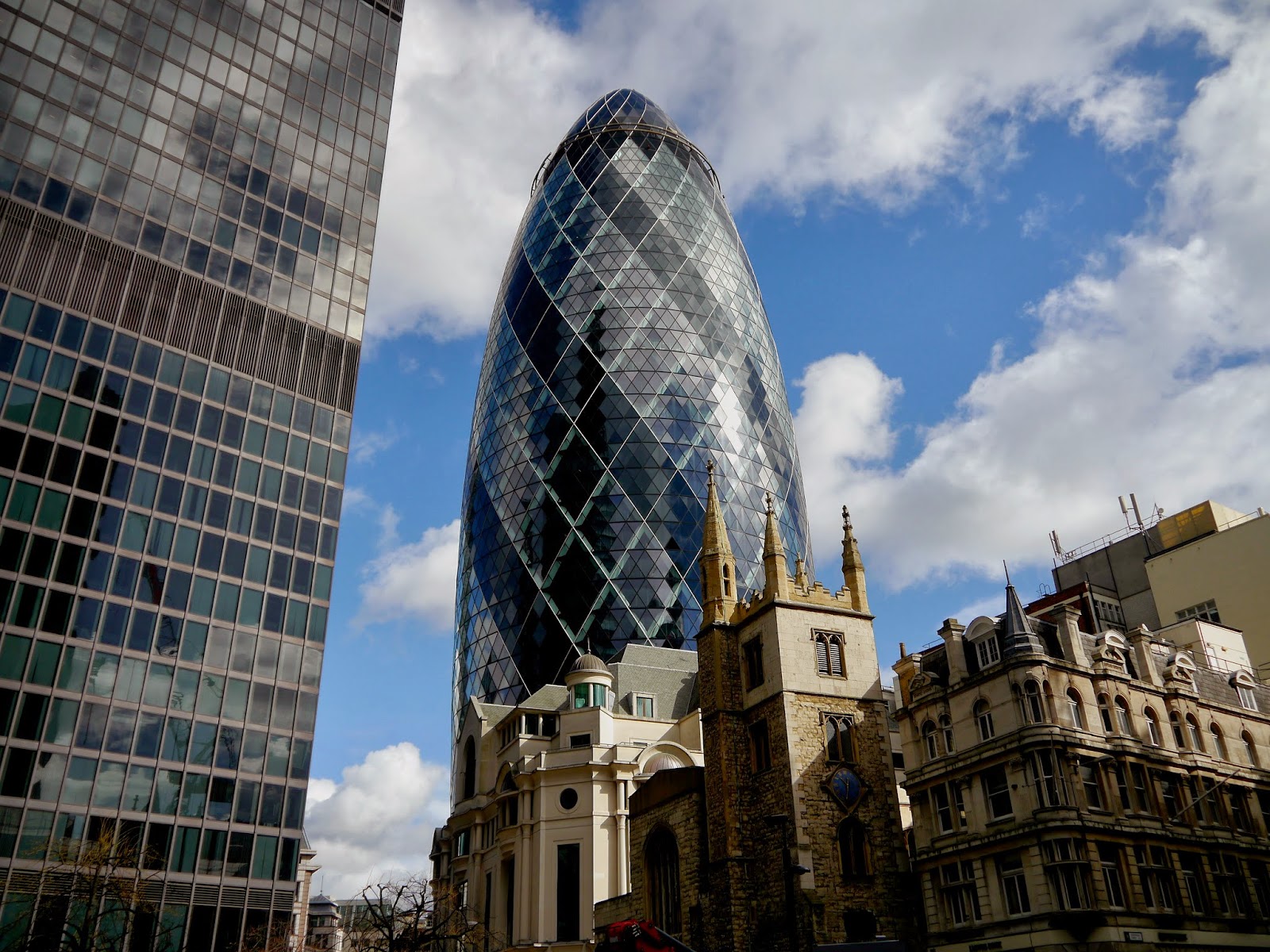 As I reached Charring Cross I contemplated taking the tube and then thought better of it. The sun was out, traffic was light and I was feeling okay. I therefore decided to cycle another 7 and a half miles back. In total I cycled over 71 miles. As I cycled up The Mall tourists lined the streets in anticipation for the changing of the guard. I hypothesised as to whether they would believe what I had just done.

I was really pleased to see that my average moving speed for the 58 miles was 12.2 mph but I must get what i take with me right. I definitely went overboard with the amount of kit I took. Next time I am going back to the minimalist school of thought!!

This was a great ride. The addictive nature of the night ride to the coast and the sense of adventure and challenge it brings was certainly there and I look forward to the next. It was great to ride with my fellow Bromptonians and I hope that more make it to the next one. As always a big thanks has to go to Simon for organising these great rides and to his excellent team of Tail End Charlie's and Way finders for keeping us safe.