Yesterday I took the plunge and got myself some SPD pedals and a pair of cycling shoes. I have been thinking of doing this on and off for weeks. I was toying with the idea of getting some for the Brompton World Championships but didn't.

When I was out on some training rides with Harry and Phil from 'Small Wheels Big Difference' they both liked them and suggested to me that they make going up hills easier. They certainly seemed to work for Harry and Phil, however I do think both of them being ultra fit might have also had a part to play.

I opted for a fairly basic pair of Shimano M520's.  They are about 380 grams (so not adding a huge amount of weight) and come with everything you need to get started. 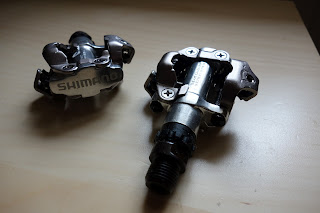 They are double sided, so whatever side it up you can always clip in quite easily. I believe that they are officially mountain bike pedals but chap at the shop I bought them at went into the staffroom to show me his Brompton with the exact same pedals fitted. He said lots of Brompton riders use them.

Together with the pedals I had to of course get a pair of shoes so I could clip in. I opted for a pair of Louis Garneau that were on special offer. They are really comfortable and provide a firm footbed. I like them. I also like the fact that there are no laces to worry about! I always seem to to get mine wrapped up in the wheel, regardless of how much I tuck them in etc. 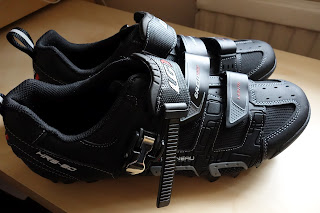 One strange thing was that I had to get a size 12.5! Normally I'm an 11 but me trying them on was like a scene from Cinderella where the ugly sisters attempt to put on the discarded slipper! I will put it down to the fact that they just came up small, otherwise my feet are growing. 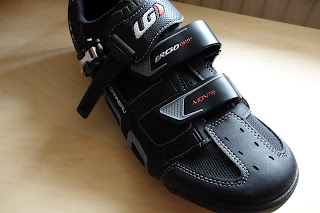 These shoes have a heavy tread and the cleat is recessed. This means that would can walk on them without feeling you have stepped on to an ice rink. 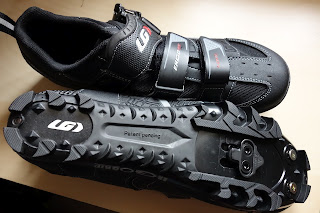 Taking the old pedals off was quite easy as was fitting the new ones. They don't in any way hinder the fold and the left pedal doesn't really stick out that much at all. 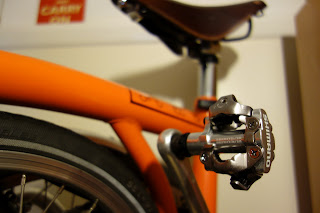 The all important ride. Riding off and getting clipped in was fairly easy after a couple of attempts. I practiced quite a few times, unclipping and then clipping in. Within five minutes I was fairly confident and even proficient at clipping and unclipping on inclines and hills.

I imagine that in the wet these pedals would be pretty good as there is a lesser chance of slipping. I did try and go up the odd hill to see if Harry and Phil were right in their enthusiasm. I have to report that it does seem easier with them than with the standard pedals. 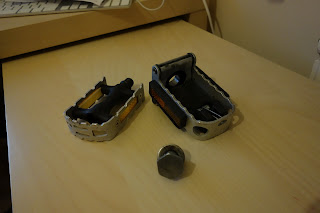 The true test will come next week when my daily commute returns in ernest but for the moment at least I really like them.

Anyone out there with any tips on how to get the perfect adjustment for the cleats on the shoe, please comment.