This morning I met my partner in crime iCrazyBee for some top secret training for the Brompton World Championships, which are this time next week!! I say secret but I can reveal that it was in fact Richmond Park.

Richmond Park is a 2,360 acre park and one of London'd Royal Parks. In 1625 Charles I (the one who had his head chopped off) brought his court to Richmond Palace (not there anymore) to try and escape the ravages of the plague in London. The area was turned into a hunting park for red and fallow deer.

It was a glorious morning. The sun was shining, with a light westerly breeze. We met up shortly after 09:00 and made our way to the Park. Richmond Park is vast and is a popular haunt of cyclists. When we arrived the roads through the park were dominated by cyclists. I do not know if it is normally like this but perhaps the weather and our success in the Olympics brought out more than usual.

I took my Raw Lacquer S2L and on the hills as I have found on my daily commute, I managed to keep up with the posh and rather expensive road bikes. Of course, with only two gears once on the flat, they vanished into the distance.

The ride at Richmond Park is quite demanding to say the least. The gradients are quite tough in places. I think that because I had been on a few training rides  this year with the, Small Wheels Big Difference chaps, I was able to cope with them better. I certainly hope that when I encounter the hills at the Brompton World Championships, this will all help me and I will be able to post a better time?

At one point on a sustained, flatter part of the park I followed iCrazyBee in a peloton. This appeared to work when I cycled closely to his back wheel. Just to see if I was imagining it, I eased the pace and then accelerated to ride close to the back wheel in front of me and found that there was a discernible difference. This is something I might be able to employ in the Brompton Marathon event if I can find other willing participants - and can keep up with then! 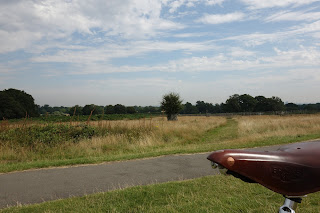 We intended to do two laps but we were happy with the one lap we managed which we tackled aggressively. We cycled back to Richmond Station and made our respective ways home. It was great seeing iCrazyBee again and we were both excited and looking forward to next week.

Next week I plan to get in a little more training. Nothing too serious, but enough to keep things ticking over. I have a few bits and pieces to get ready for next Sunday and hope to have everything in place by Thursday at the latest. All the talk and writing about the Brompton World Championships is nearly over and the countdown really begins!