2nd highest skyscraper in the City of London on a Brompton!

Today was an interesting day, one that I had been looking forward to and one nothing in life prepared me for. When I left home this morning Mrs Orange Brompton and my children remarked that dad was even happier than his usual happy chappy disposition.

Regular readers will already know that I love London and every so often dip my toes into the world of urban birding. My children from an early age loved to go to places like Regents Park or Hyde Park and spot the many different birds and and wildlife found therein. Like any good dad, I made it my business to try and be one step ahead and know more than they did. I would try and recall my my knowledge of birds, from days as a child when I went out into the urban jungle armed with a pair of theatre binoculars (stolen by my brother) and an ancient bird guide. Today took me back to a time where I could be amazed and left almost speechless.

I travelled part way on my beloved Orange Brompton and the rest by tube (boo). My location was 'Tower 42' or if you are old enough to remember the 'National Westminster Tower.' I was part of a 16 strong bird group carrying out a survey to record the passing of migrant birds.

It was run and organised by David Lindo, 'The Urban Birder.'  For those of you who don't know, David Lindo is a birding expert that specialises in the urban environment. He writes books, articles, leads tours and appears on television. I first heard of David Lindo when he appeared on 'The One Show' many years ago. My eldest child ran to get me as there was a guy taking about birds and wildlife at a place in London we go to. The rest is history. We went to that location the very next day and my family's urban birding began in ernest. I have provided a link to a blog entry I made last year regarding his excellent book.

Those attending gradually started to assemble near the entrance of Tower 42 and it wasn't long before we were on our way inside. Security was naturally very tight and once this was done we made our way to the two lifts that would take us near to the top. After that it was up a few ladders, through a hatch in the roof and we were greeted by the most incredible sight!


It took quite a while to take it all in and seeing London from this incredible vantage point was I have to say overwhelming. I could make out dozens of famous landmarks: Tower Bridge; Crystal Palace; Alexandra Palace; Battersea Power Station; St Paul's Cathedral (looking very small from this height); Canary Wharf. The list could go on and on. Even the new and ever rising star on the London skyline, 'The Shard' looked quite small from up here. 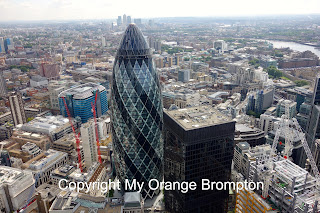 The view of the 'Gherkin' one of my favourite buildings was wonderful and it was looking at this that I spotted a Lesser Black Backed Gull and Cormorant flying past - shamefully, my contribution to the survey. There wasn't a huge amount out there...honest. Someone shouted out that they had seen a bird and we all had a look  Turned out to be a Buzzard no less.

Through a scope I was able to see a Peregrine Falcon perched on a ledge towards the top of the Tate Modern.  There were rumours of a Black Kite that was seen flying high from the east but alas we weren't to see it this time. 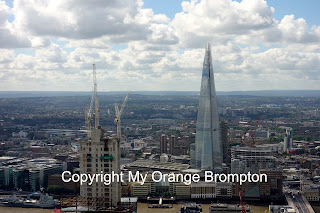 We were up there almost two hours by 12:00 p.m. I sat down looking out at this view while having my luncheon. Before long we had to pack up and make our way down. It had been a brilliant experience and one I hope to repeat again when I can.

Our leader/organiser David Lindo was great and a big thank you to him. (Why doesn't this man have his own television show)? I also think that the owners of Tower 42 also need to be thanked for allowing us up there!

When I eventually got back to my Orange Brompton and cycled home I still couldn't quite believe where I had been today. When I told my children about it all, showed them the pictures and about the birds I had seen and might have seen, I was told by them in no uncertain terms that we were going to the London Wetlands Centre...tomorrow for a spot of urban birding!