Topiary on a Brompton?!

Saturday was an all Brompton club ride where we would cycle, with some hills, in the pursuit of all things topiary. The ride leader was Jenny and she did say that you had to work hard for your topiary, hence a few hills.

The meet point was the Birdcage outside Kings Cross Station, so I decided to cycle in the 17 miles from where I was staying. It was a lovely day and I knew that I would not be able to complete the entire ride as it started at 13:00 and I had some family commitments later on. The extra miles getting there and getting back would make up for it.

Part of my route took me on the Grand Union Canal for a few miles before I got to the sanctuary of the road and the more familiar Ladbroke Grove. I am not a fan of the canal towpath, despite it being fairly quiet and having no cars. 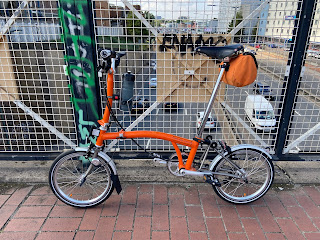 I stopped to take a photo of my Brompton with graffiti in the background, mainly for a fellow Brompton rider from Germany who posts some excellent photos. You'll see this one and some of his via my Instagram '@orangebrompton.' Please follow me if that is your thing. I have enjoyed corresponding with many of you via the messages. Click here. 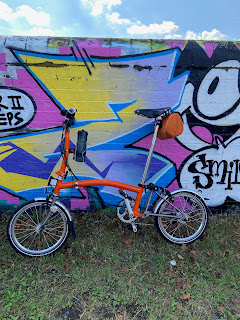 I was able to get another shot of Trellick Tower while a few floats were being prepared and sound systems tested for the Notting Hill Carnival. 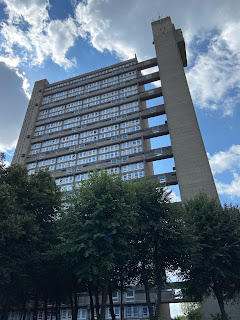 At the meeting point there were lots of riders and by the time we left I think there were over 30 of us - many familiar faces and plenty of new ones. 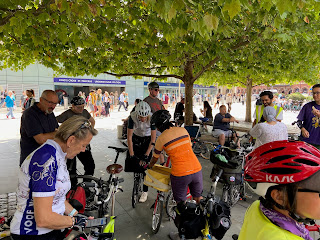 Once the briefing was done, we were off in the pursuit of all things topiary. 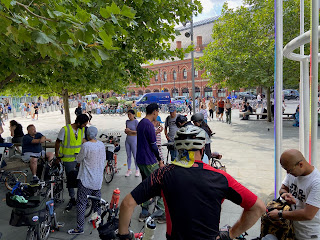 I have written before that there is nothing quite like a Brompton group ride and the peloton that forms is a sight to behold. It just brings a smile to the face of everyone participating and to those that see us glide by. 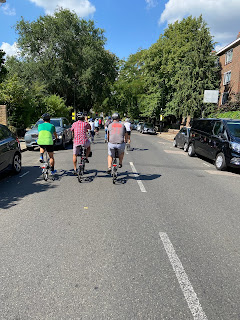 Our first topiary was...well to be honest I cannot remember what it was now and at the time I think that I might have uttered, 'really?!' when told what it was meant to be. 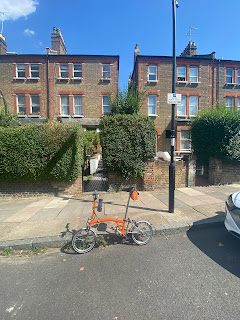 The slightly dubious nature of the topiary did nothing to curb the enthusiasm of participants and we eagerly moved on to the next. At a few junctions I stood with my Brompton pointing in the general direction of travel and when I heard the 'all up' call I cycled back to the front to do it all again if needed. 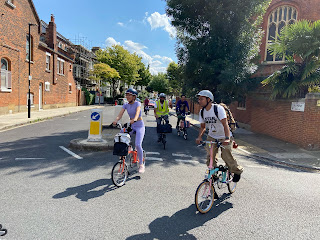 Graham had brought his dog, Emily with him and she had a little run while cycling or sat happily in the front bag on Graham's Brompton. 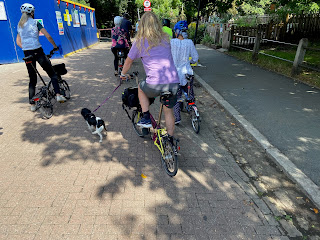 The next items of topiary was one we had seen on a cat ride lead by Nick. We took lots of photos trying not to block the path of bemused and amused pedestrians. 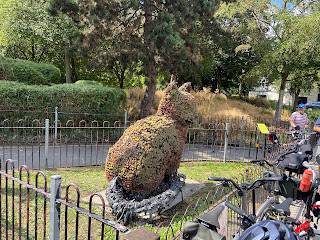 The third was sheep and the naughty schoolboy in me instantly giggled at what I thought the sheep were doing. I will leave it to you to discover whether your mind is as corrupted and juvenile as mine! 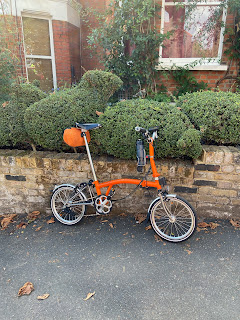 The first of the hills was up next but it was pretty tame really. I was in awe of Jay on his Brompton Electric which allowed him to power almost effortlessly up the hill. It did make me think that in a few years from now - assuming Brompton make an orange version - it might just be the thing when I am too old to get up the hills using my own power. 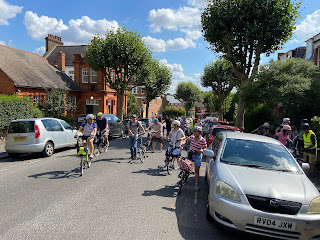 At the top, gentleman that is, Ronnie provided a great photo opportunity as he took his own photo of the views. 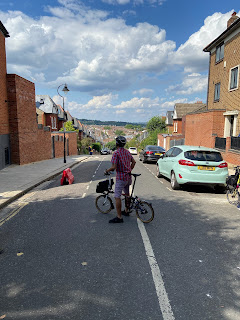 At first glance, I again could not offer any realistic suggestions as to what this example of topiary could be? Viewing from a different angle, it became obvious. 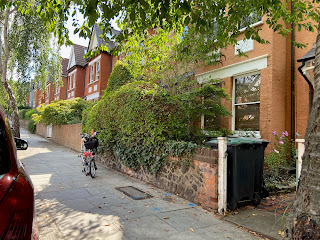 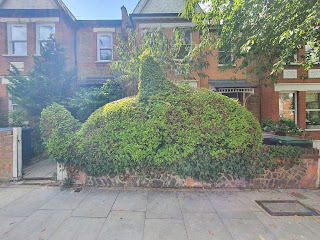 Another hill, this time worse than the one before, was beaten and were were greeted by an ice-cream van and a street party that was just getting itself ready. 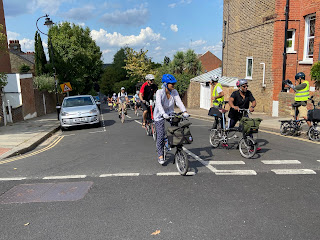 At the top, many bought, lollies, ice cream and slushies. I decided to resist the temptation. 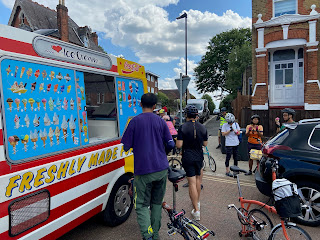 Next up were some ships on an ocean that I could make out quite clearly. 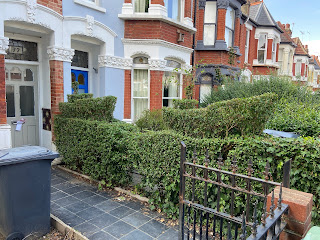 Only a few houses down, a rhinoceros that was perhaps in need of a little touching up. 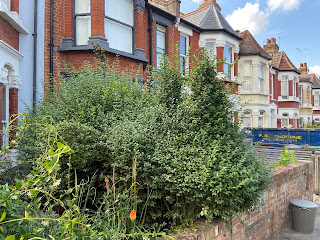 There was a great deal happening on this on street! Over 30 Brompton riders, descending and taking photos and the sound of music pumping from one of the participants portable speakers that I think was Laura Branigan's, 'Self Control.' Added to this was a white Rolls Royce with a bride off to get married that had the unexpected pleasure of a few cheers, applause and me saluting as she drove past. It was at this point I glanced up and saw a lady looking out of her upstairs window. I suspect she may have thought that some sort of biker gang had descended upon this normally quiet, middle-class street (I mean they have two types of topiary metres apart) and probably uttered, 'bang goes the area!' 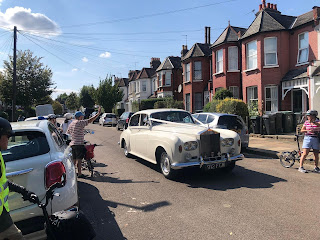 Further on was what looked like a caterpillar or possibly Hogwarts Express. I didn't dare to get too close as a large beast of a dog came strutting out and didn't seem that pleased. 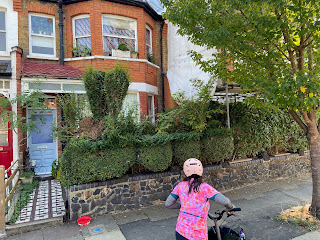 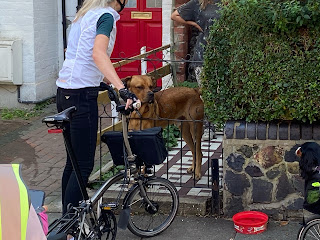 We moved on to Alexandra Palace where we had some refreshments before heading up to the famous building and views. 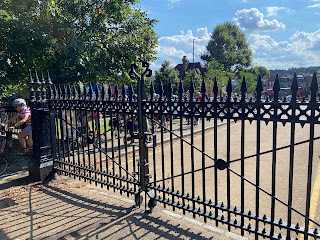 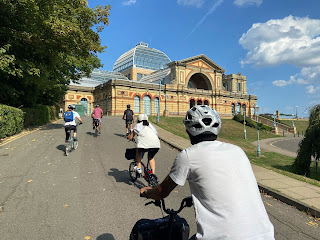 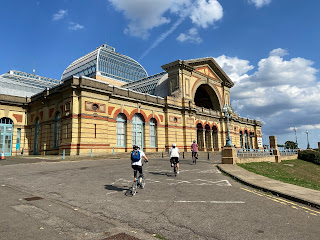 It was here that I knew I would have to part company and head back. Not wanting to get the tube, I cycled back and clocked up a tidy 39+ miles in total for the day. I gather from Jenny that some of the really choice examples of topiary were to come but I am sure that I can get the route from her and see them at some point in the future.
Another great ride and many thanks to Jenny for leading. I now look forward to a night ride next week that won't be to the coast, but I am sure will be rather good. 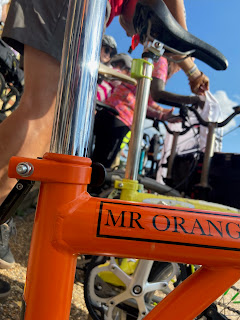