I was up early this morning. I am generally an early riser but the heat throughout the night did help to rise out of bed. It was my intention to pay a visit to Kensal Green Cemetery as it has always been a rather special location.

On the way, part of my journey saw me cycle along the Grand Union Canal. I am not that big a fan of cycling close to water. I am not use why and I am a strong swimmer? Today wasn't too bad as apart from two dog walkers - one of which was sensible enough to comment that they loved my bike - I didn't really encounter that many people.

I stopped at a boat that has a rather strange rear stern! It made me think what my reaction would have been if it had of been dark and I only had a light illuminating the path ahead! 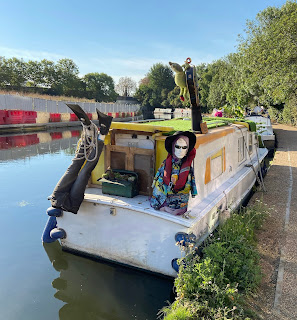 I exited the canal via a little bridge near Ladbroke Grove and once on the road I was back familiar surroundings that I know very well. 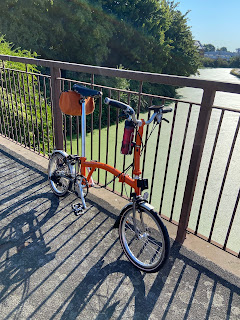 Arriving at the the gates for Kensal Green Cemetery, I had got the timings a little out. I had thought it was open at 09:00 but it was actually 10:00 for Sunday. As I had arrived 10 minutes early and not wanting to wait over an hour, I decided to go for a little cycle wherever the mood took me. I will of course return to this location soon - and at the correct time! 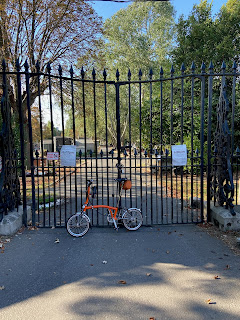 Anyone who has lived in the areas surrounding Kensington and St John's Wood, if they know where to stand, can usually get a good view of Trellick Tower. It is a building I have always loved. 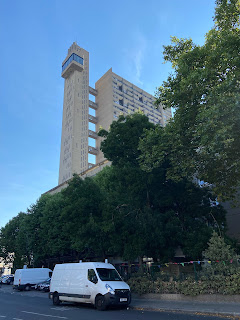 Opened in 1972, it now a Grade II listed building. Designed by the architect Erno Goldfinger (quite a character) its Brutalist style divides opinion. I have already given away what I think of it. 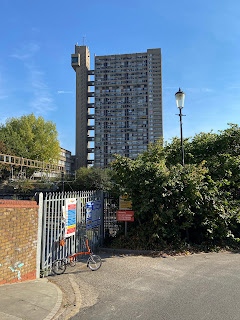 I usually take a photo of it when I spot it and I probably have hundreds of them taken at different vantage points, times of the day and in all sorts of weather. The dream is to one day visit one of the flats higher up in the building to have a look inside and also at the view. 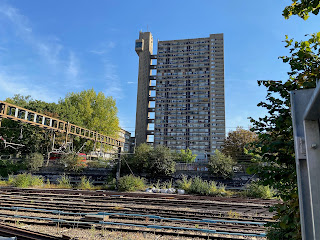 Taking this shot was rather fun. A few joggers couldn't quite believe that I was taking a photo of my bicycle. 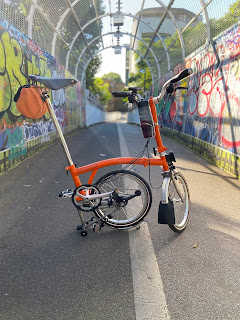 There are several streets in London that have Mews Houses. These were built in the 18th and 19th century with the original intention of stabling horses with accommodation above for servants. The larger grand houses were usually not too far away. Now, almost all of these have been converted into several flats and very few remain intact as just one property. 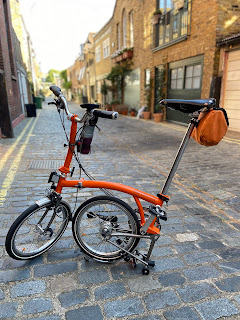 Over at Parliament Square things were unusually quiet and not a great deal was going on. 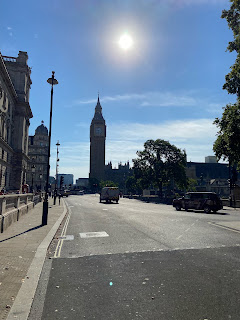 At the National Theatre I stopped to take a photo as this is the start of many a nocturnal adventure. 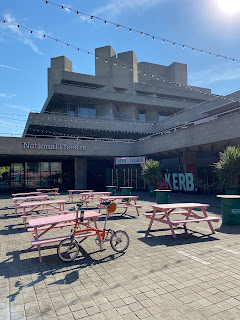 Today, I didn't cross the Millenium Bridge and instead took Southwark Bridge instead. As usual, the closer one got to the Square Mile the less busy it became. 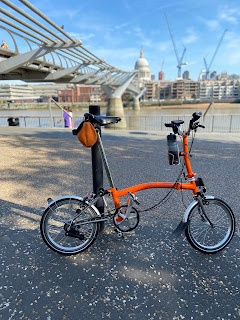 I stopped to take a photo of this magnificent view - of my Brompton! That done I looped back towards NW8. In all I cycled 22 miles and enjoyed every minute of it. I know that Like me, many of you out there have told me about you doing something very similar in your own cities. Keep sending me those.