Well at some point last night, James completed the Transcontinental Race on hbis Brompton! This really is epic and puts James in the legendary category. I do suspect however,  knowing him, the next time I am pedaling beside him he will be incredibly modest about it.

I think that James is the first person to complete the TCR on a Brompton but there have been a few who have tired in the past but didn't get there due technical issues. Roger Seaton had a go and it was only the bad luck of mechanicals that prevented him from finishing. Saying that James had a crack in his ear triangle but managed to get it sorted out.

Again, a truly incredible achievement and well done to James. He needs to have some time to recover and take it all in but I imagine these memories will last a lifetime. I wonder if he will ever do the 'Trans Am Bike Race?'

Tomorrow I will be cycling along the Grand Union Canal, crossing the River Thames from north to south and traversing the wilds of Hyde Park. Not quite the TCR#8 but in honour of James I will post a photo of the most exotic ice lolly I can find! 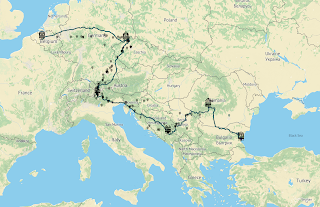