Television blast from the past in Hammersmith

Today I stopped off in Hammersmith on route to somewhere else and could not resist paying visit to a couple of locations.

Hammersmith Bridge, designed by the great Sir Joseph Bazalgette was opened in 1887 and has a Grade II listing. Until quite recently, this bridge (one of my favourites in London) was closed to cyclists and pedestrians from August of last year. Recently the bridge was opened up once again to cyclists and pedestrians and I took full advantage of it today. I went across north to south one way and came back the other way. 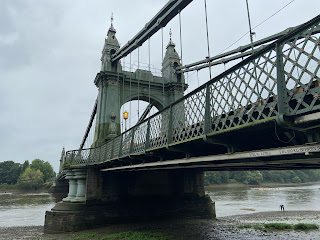 There was quite a bit of rowing taking place on the river Thames below. A couple of eights were fighting it out and going at a terrific speed, encouraged by two small boat following. It was megaphones at dawn as instructions were screamed out, each trying to spur their team to do more. 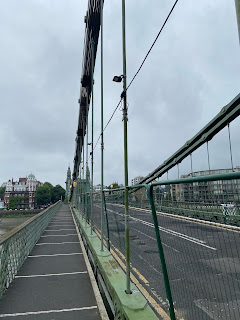 At various points on the bridge are lots of coats of arms. These were painted over in the same green paint as the rest of the bridge but at one time must have looked quite stunning in their correct heraldic colours. 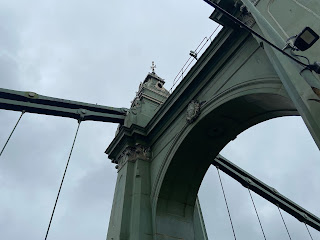 Just up the road is a small bench sitting at the junction of Queen Caroline Street and Hammersmith Bridge Road. I have been here more time that I can count as it was a bench that featured in the opening credits of the BBC television programme 'Bottom.' This ran for 3x series and all began in 1991. I loved it at the time. (In fact my parents liked it even more)! 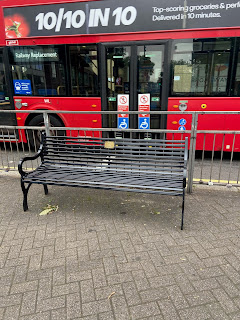 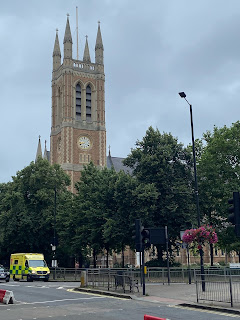 At some point the bench was removed but after its star Rik Mayall passed away, a petition persuaded Hammersmith Council to replace it, which they did in 2014. The wording on the plaque was a group effort from several fans. 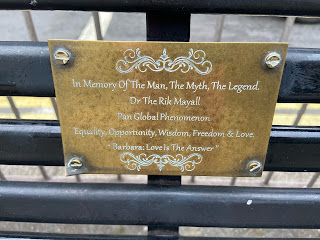