Today was a rather different ride with people I normally see on night rides to the coast. This one was a day ride that took in several London historic pubs. Having read history at university for a couple of degrees before I joined the rat race, it is always something I have liked a great deal. Combine this with cycling on a Brompton, finding out something new about London and meeting up with some familiar faces, it was an easy choice to make myself free for this one.

The start point was Hyde park Corner. I got there early so decided to cycle around for a bit and take the odd photo here and there. Naturally, lots of these featured my new and rather fine Cloud Blue Brompton! 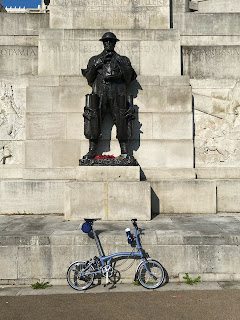 At Buckingham Palace I would like to say that I saw the flickering of a net curtain being pulled back to see what that fine bicycle was, but it might have just been my imagination. 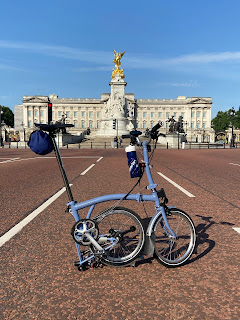 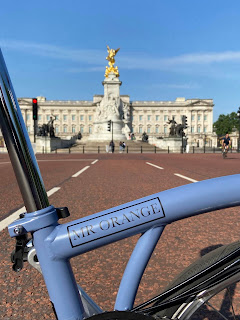 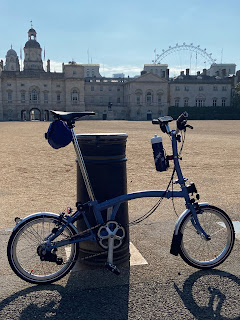 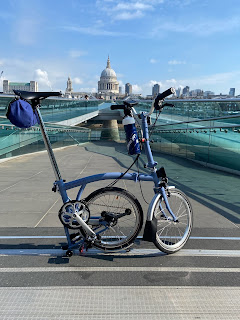 Once the soldiers on horses went past we got ourselves ready and were off to find out about some rather interesting locations. Our ride leader was night ride to the coast ride leader and gentleman that is, Ross. He had a real treat ahead for us and the route would take us all to several locations I had not heard of or seen before. 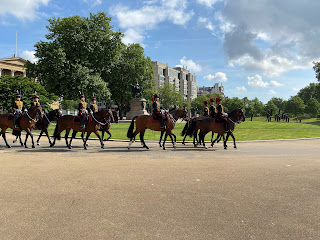 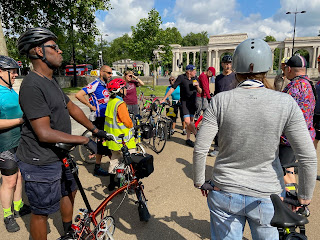 The Star Tavern Grade II  listed public house in the rather plush Belgravia has had many famous customers including Peter O'Toole of 'Lawrence of Arabia' fame, the late Princess Margaret and even Diana Dors. It is also famed for being the location where the Great Train Robbery, carried out in 1963, was planned and masterminded by Bruce Reynolds in its upstairs rooms.

The Grenadier, also in Belgravia was originally built in 1720 as the officers mess for the senior officers but opened to the public in 1818 as The Guardsman. It was renamed The Grenadier in honour of the contribution they made at the Battle of Waterloo.

It is reputed to be one of the most haunted pubs in London. Legend has it that a Grenadier called Cedric was beaten to death for cheating at cards. Inside the pub you will find various bank notes pinned to a section of wall which is said to ward off Cedric - or other ghostly apparitions - from haunting you as you sip your pint!

The Sherlock Holmes, in Northumberland Avenue is a Victorian themed pub that contains lots of memorabilia all about its namesake. The original collection of this was put together during the Festival of Britain in 1951. Originally called the Northumberland Arms, it appears in the 1892 Holmes story, 'The Adventure of the Noble Bachelor.' The Turkish bath that Holmes and Watson used to frequent can still be seen in the nearby Craven Passage.

The Ship and Shovell, another Victorian era pub located in Craven Passage, is quite unusual in that it is two separate buildings facing each other, connected by a shared cellar.

It was lovely catching up with everyone and to see so many out on their Brompton bicycles and plans were penciled in for more rides in the near future. 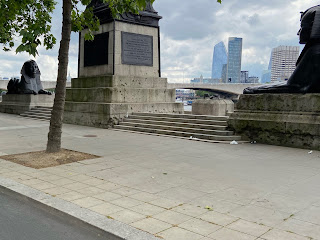 The weather was very kind and near perfection. When I got up there was actually fog outside but it was burnt off pretty quickly. 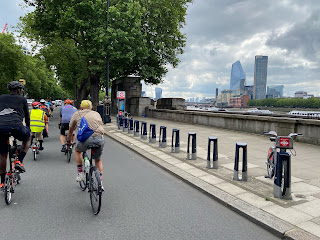 The pace was conversational and when needed we stopped to regroup. This didn't really take that long and even London traffic lights seemed to know that we were coming and cooperated. 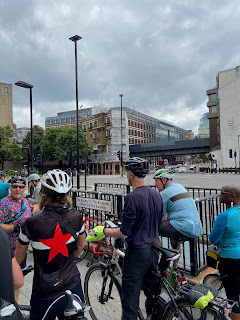 The Black Friar, is a Grade II listed pub build approximately 1875 on the site of a former medieval Dominican friary. It remains on of the few art nouveau pubs in London and was saved from demolition by a campaign spearheaded by the late poet, Sir John Betjeman. 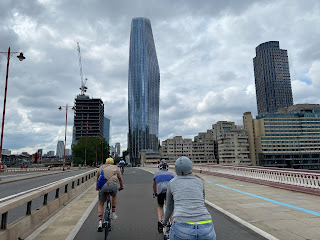 Doggetts', is a pub whose name refers to a a boat race that pre-dates that of Oxford vs Cambridge University, originally organised by the actor Thomas Doggett. Every September there is a race for single sculling boats between London Bridge and Cadogan Pier in Chelsea, some 4 miles away. I am going to try and find out when it takes place so that I can go and watch the start.

The Boot and Flogger, in Southwark is the only premises allowed to sell wine without having to apply for a licence. This dates from a charter of 1567 granted by Queen Elizabeth I.
The George Inn, in Southwark is a Grade I listed pub is the only surviving coaching inn in London and it really is a stunner. It was frequented by Charles Dickens and referred to in his books, 'Little Dorrit' and 'Our Mutual Friend.' The acting term, playing to the gallery, may well have derived from inns and pubs like this as many were used by Elizabethan theatrical productions. 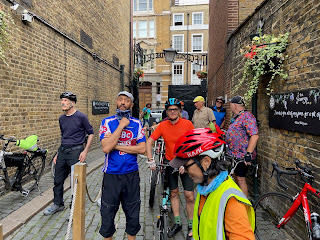 The Kings Arms, in Borough has a large royal coast of arms above it. This came from the demolition of the stone gate which stood at the south end of Old London Bridge which somehow found its way suspended outside the pub. 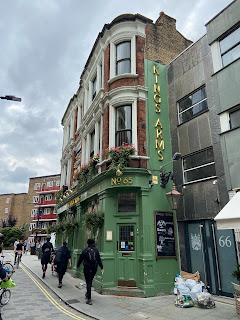 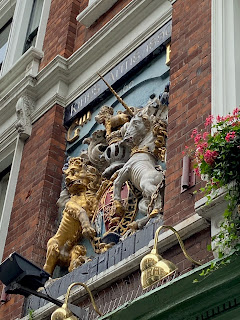 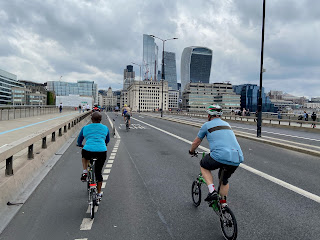 Dirty Dick's Pub, on Bishopsgate got its name after Nathaniel Bentley refused to wash himself for the rest of his life after the tragic death of his fiancee on their wedding day. There is again a Charles Dickens connection as he is considered the possible inspiration for Miss Havisham in 'Great Expectations.'
The Viaduct Tavern, is a Grade II listed pub that is one of the last of the Victorian gin houses in London a stones throw from the Old Bailey. It is said that in the basement there are the remains of a few cells from the demolished and infamous Newgate Prison. Despite them perhaps being a remnant of a debtors gaol affiliated to the prison, it is nice to think that they might be...

Ye Olde Mitre, is Grade II listed pub at Ely Court, Holborn. Built in about 1773 but there are reports that the original building was built in 1546. It is said that Queen Elizabeth I once danced there. Strangely, the pub was actually once part of Cambridge as the land it occupied belonged to the Bishop of Ely!

Ye Olde Cheshire Cheese, is a grade II listed building on Fleet Street. Build around 1538 is was rebuilt shortly after the Great Fire of London. There are quite a number of literary figures who were regulars. These included Sir Arthur Conan Doyle, Mark Twain, P G Wodehouse and Charles Dickens - who obviously got about a bit! 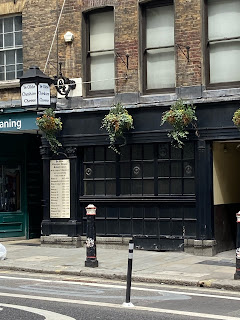 The Seven Stars, is a Grade II listed pub in Holborn is said to have survived the Great Fire of London. The Seven Stars is said to have come from its former name the League of the Seven Stars after the seven provinces of the Netherlands from the many Dutch sailors who where among its first customers who settled in the area. It is also famous in modern times for the owners cat who wears a legal ruff! 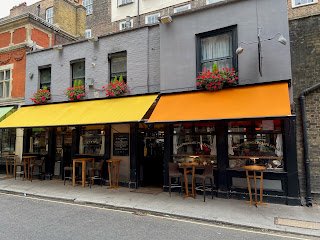 The ride ended at another pub in between Paddington and Hyde Park. I decided to head straight off along with a few others that had the same idea. As I cycled back England fans were out in force and chanting, singing and at one point cheering me at full volume as I simply cycled past. When I dinged my bell and waved back they responded with louder cheers.

Another great ride! I really do like these history rides and Ross provided us with a great route and some memorable locations. I don't actually drink but there are a few pubs we visited I want to go back to to get a better look. Let's hope they do sparkling water!