Whitstable on an Orange Brompton

Despite looking forward to this one for some time, with a very busy week at work, I very nearly bailed before I set off. I just didn't know if my mind or heart was in it. I decided that it might do the power of good, so set off for central London with the prospect of a night ride to the coast making me feel better.

When I reached the South Bank, London appeared to be almost back to what I remember it being pre-Covid. Sound systems blared out deep bases and there were lots and lots of people around. All good in my opinion.
At the meeting point there were two groups. One was to leave at midnight, with the one I was in leaving 15 minutes later. Our ride leader Kim was readying the troops and doing the always entertaining safety talk. On this ride Jenny, Mark, Amy, Dr John and I would be on our Brompton bikes and Sam - who does own a Brompton - was on her Condor road bike. At midnight the first group left and bang on 15 minutes later so were we. 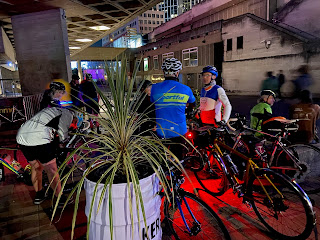 It was good to catch up with everyone and at the Old Vic Theatre the sign reading 'Back Together' said it all. 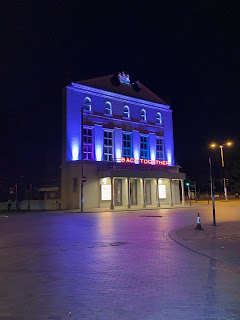 We arrived at Greenwich quickly and I couldn't quite believe how it popped up so quickly.
From there we hugged the Thames for a while passing Woolwich, the free ferry that transports people across to the other side and later Woolwich Arsenal. 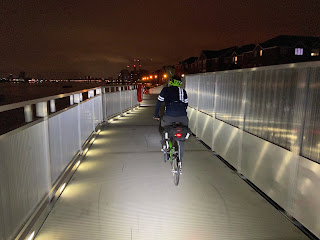 Normally we cycle past the 'Assembly' statues by Peter Burke but as I was a little way ahead of the pack I decided to stop and take a photo or two. These are 16 cast iron figures installed in 2005 aiming to depict a collective human presence. For me they just make a nice backdrop for my Brompton! 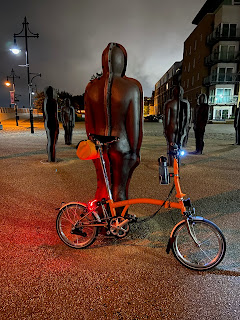 Every so often we stopped to regroup and the ride was slick and free from any mechanical issues. The weather was kind to us too. There had been the prospect of some light rain at some point but it did not materialise and for the most part was quite mild. 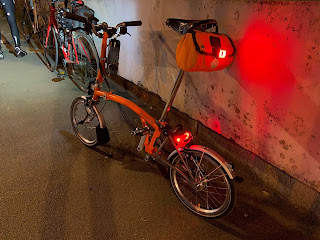 One stop was on the route of the Kent Fastrack bus service and we actually stopped about 100 metres before the wire statue. Jenny pointed out that the photo opportunity was about 100m away to our ride leader Kim, who kindly indulged all of us who wanted a photo! 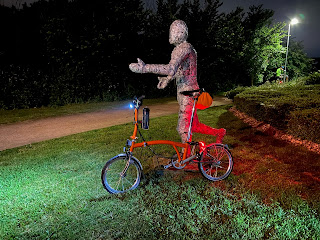 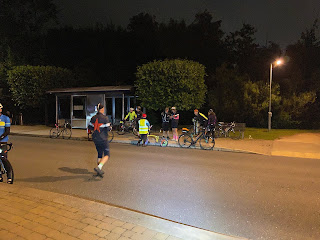 Harmer Street proved to be as interesting as usual. The 'Call Boy' pub still seemed to be in under redevelopment and the full moon to the left of the large clock tower go almost everyone taking photographs! 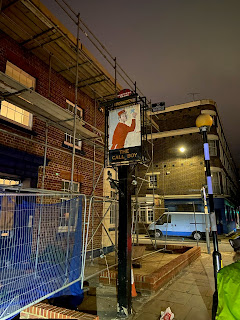 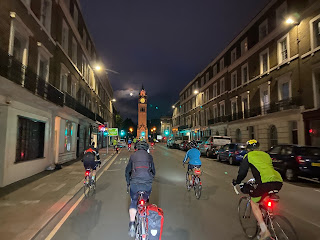 Once we passed Gravesend the ride look on a slightly different turn in that there were more winding country lanes. In was on these that we saw to our left a bright, full moon that proved very difficult to get a photo of. As soon as you tried, cloud obscured it. Once your phone was put away and after a few turns of the pedals, it was out again!
Our halfway stop came in the always welcome sight of the Church of the English Martys in Strood. There we were greeted by Friday night ride to the coast veteran and ride leader for the recent Ashford night ride, Tim. Home made rolls and cakes were on offer along with tea or coffee to wash it down, in my favourite half way stop. After a little less than an hour we stepped into chilly morning air, so people put on a later or two. 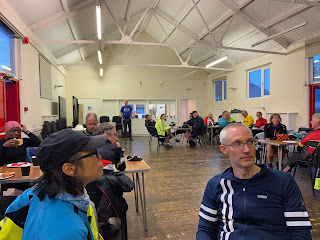 One of the stranger sights that we got a very good look at because dawn was so early, was the former Soviet Navy, Submarine U-475 Black Widow. 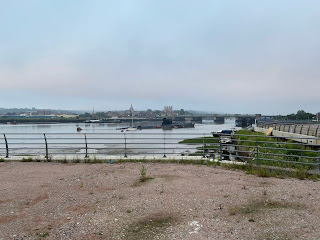 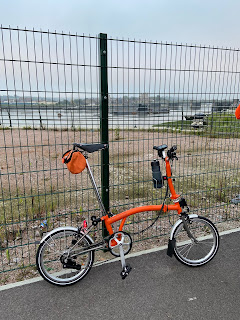 Decommissioned in 1994 it was sold into private hands and originally moored near the Thames Barrier where it was actually open to the public as a museum. A couple of years later it was moved to Folkestone for the same purpose. In 2004 it was moved again to this location awaiting some restoration. I imagine that it would make an interesting day out if it were ever opened to the public again.
Not too far way we passed Rochester Castle. We normally see this in half darkness but early on this morning we were afforded great views. Build about 1127 it remains quite a formidable sight. 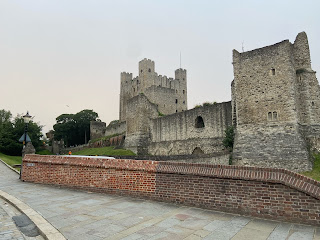 From here on we cycled on stunning country lanes with each push of the pedals bringing into view more and more stunning scenery. 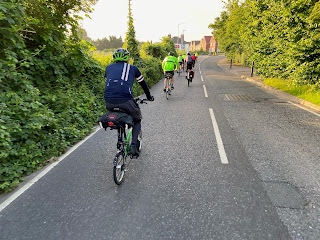 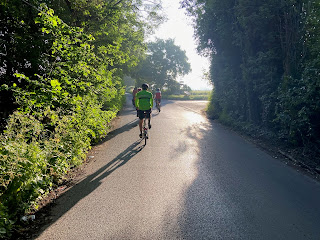 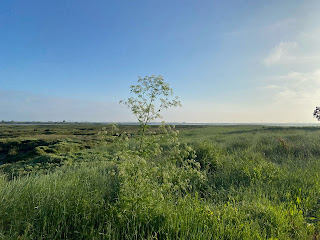 We stopped to all take photos of a bridge. I speculated as to which bridge it was and was told by a very tolerant participant of the ride that it was not what i had just said. I still don't know what this bridge is called but it does create a rather fine backdrop for my Brompton! 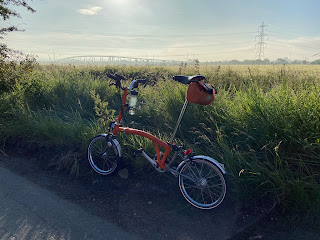 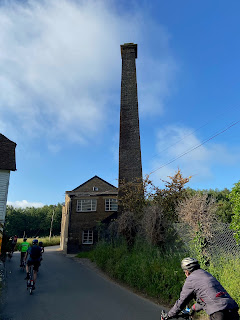 I decided to take my Titanium Orange Brompton with me only because I had not had the time to give my Orange, Black Special Edition a clean. As always ti performed really well, but I did miss my other Brompton a little. There is always next time. 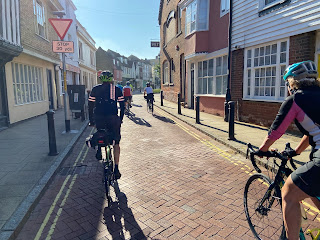 When we reached Faversham Parish Church with its very distinctive spire we all knew that the famous left turn wasn't too far away. This church is quite unique and is the resting place for King Stephen making it one of the few churches outside of London where an English King is interred. 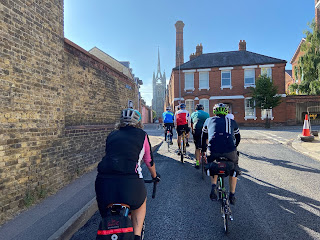 The left turn came and the Brompton contingent worked as a little peloton driving forward towards Whitstable. With the help of night ride to the coast veteran and all round good egg Stuart at the front, we cycled at around a good 20 mph, trying to keep up with him, into a slight headwind more or less all the way to Whitstable town centre.
Once on the road that would lead us to the finish, I peeled off with Dr John following and we made our way to the station for the 08:50 train to London. On the train our bikes were parked in a luggage rack and I had difficulty not falling to sleep. Thankfully a group of ladies friends, mothers and daughters - one of which was celebrating their birthday - boarded the train a couple of stops in. Their friendly banter was very entertaining and it kept me from nodding off for the most part. At St Pancras Dr John and I went our separate ways until next time.
This was a wonderful ride and exactly what the doctor ordered. Once I got home I needed a few hours sleep to recharge the batteries and felt pretty good afterwards. As always, these rides are highly addictive and I already look forward to the next offering.
Stay safe out there people!! 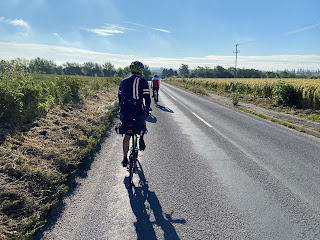