I fitted a pair of Continental Contact Urban tyres to my Orange Titanium towards the end of March and thought that I would give you a mini update on how they are going and what I think of them.

I have cycled getting on for 500 miles on them and this had included several night rides to the coast and cycling over road and less forgiving surfaces. I have cycled in the dry and wet and it didn't take long before I felt confident that they were robust enough to cope with the overnight adventures I am so fond of. So far no punctures and they look pretty much as good as when I put them on.

They do seem to roll better than the standard Marathons I previously had on my bike and are are as grippy, if not better than, than them too.

If I did suffer a puncture I know that these would be a great deal easier to deal with than Marathons and that along is another plus point.

I will ride on them a little longer and let you know how they wear but I have already reached the stage where I feel I can say they are a better tyre. I very much doubt if I could now go back to Marathons. 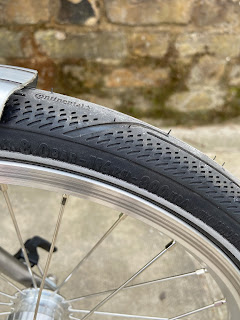