I shouldn't have laughed…but I did!

A few years ago I remember seeing a Brompton rider with one of those very large air horns that you charged a plastic bottle with air from a track pump and when the button pressed, would emit an incredibly loud honk. This would not last indefinitely and would need frequent charging up with air - depending on how long and how many honks you took.

I must state straight away that I do not approve in any way of what I am about to recount and I feel suitably ashamed on my reaction. Well, with that typed I had better tell you what I witnessed.

I was cycling along Kennington Park Road with a few cyclists in front of me on the cycleway clearly marked in blue paint. Ahead I saw two people walking in the cycleway. The cyclist closest dinged his bell but they kept walking where they had been. The second, directly in front of me about 20 metres ahead sounded his equivalent of bell - the air horn. The noise of this made me jump but one of the poor people walking on the cycleway was even more startled and in an uncontrolled, involuntary movement raised their right hand in the air - containing a Costa Coffee cup - and proceeded to also do something that looked like 'Riverdance' with their feet. Some of the contents of the cup went over them and the person they were with as like Michael Flatley they shimmied to the pavement.

I cycled past, already in hysterics and was forced to pull over when tears blinded my vision. I tried to speak to the cylist but nothing came out of my mouth and I had difficulty breathing. Thinking I had got over this, I cycled off again but had a fit of the giggles as 'Lord of the Dance' was replayed and had to pull over again. What onlookers must have thought I do not know.

I had a look on Amazon and saw that you can still get them for £25. Cheap at half the price but I fear I could never use one! 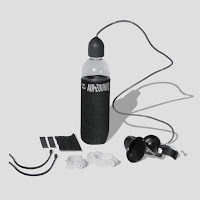