London to Cambridge overnight on my Orange Brompton

Friday marked the end of a very long week and Friday itself dragged. The only thing keeping me going was the prospect of a night ride - not to the coast - to Cambridge.

I decided to take my Titanium Orange Brompton with me for this adventure. There was no prospect of rain (always a deciding factor) but thinking things might get a little chilly I wore one of my 'Proviz' jackets just in case.

The route for this London to Cambridge run looked rather good and being relatively flat I decided not to get the tube in from where I had taken sanctuary. This meant a 15.5 mile cycle to the meeting point outside Euston station.

My journey to Euston was plain sailing and things definitely seemed a great deal quieter than they should be. Stopping to take a photo of my Brompton in a dark, atmospheric passage was a rather eerie affair as a large crow cawing was just about the only noise that could be heard echoing but not seen. 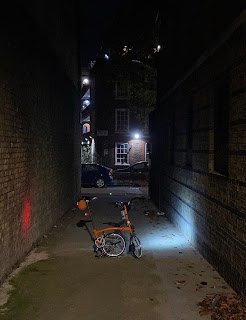 Somewhere further along I caught sight of someones front garden that was on many levels far more sinister that a Victorian alley. The garden was filled with potted garden ornaments. I took a couple of photographs, initially oblivious to the fact that through the windows a television was on with people watching it, watching me. I pondered on what sort of people would have such a front garden and quickly pedalled on! 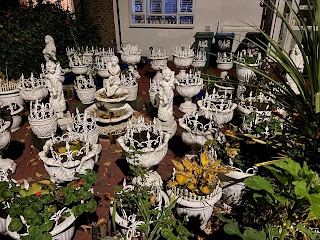 Reaching Euston station in good time I made my way to the front entrance. The station itself was almost devoid of people and the only ones I did see were security guards. It was unusually quiet. Waiting for me was our ride leader Nick, along with fellow participants Gordon and Dr John. The others that would have made up our six bailed so it was to be the four of us.
We set off just before midnight, riding in London streets that were more like 03:00 a.m. on a Monday than just before midnight on a Friday night. It was all rather strange.
Our route took us through Holloway, Finsbury Park and on to Enfield. The further we cycled the more we started to leave the urban behind. By the time we passed Hoddesdon and Harlow things started to get quieter and street light gave way to the many lumens on our various front lights.
For several miles I was alone in my own thoughts, getting some (and I hate this word but will use it) headspace. 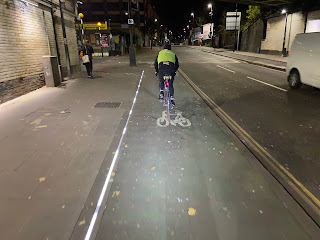 At one point I really felt the cold and was actually shivering. Pulling up the zips on just about everything that possessed a zip I carried on and only felt better a few miles thereafter. Luckily this feeling did not linger and for the remainder of the ride I did not experience this again. 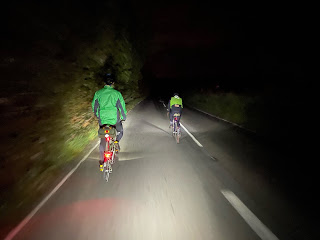 We were one of I believe five separate groups most of which followed a slightly different route. A few minutes after we arrived at the service station off the M11 in Bishops Stortford  a small but perfectly formed Brompton contingent arrived. Socially distanced we had a chat while consuming our various items of food and drink. This was at roughly 37 miles in which meant we only had 30 miles remaining.
After saying our goodbyes we stepped out into a chilly and still dark morning. I put on a snood but didn't really feel the cold and the pedalling helped to keep any feelings in this direction away. 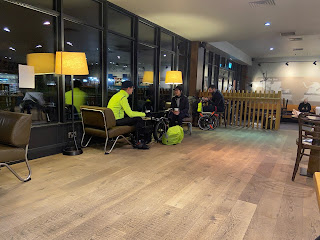 At 50ish miles we reached the highest point in Cambridgeshire, Little Chishill. This is reached by a long incline that takes one up to St Swithun's parish church. Some of the American readers of my blog are always amazed by the age of some of these buildings I mention in my blog that most people living here wouldn't bat an eyelid at. This church was founded in 1136 with parts of the current building surviving  from1275. In daylight I would imagine that there would be some pretty good views but sadly as it was still dark, we just had to imagine what they might be.
Sunrise is one of the main draws of nocturnal rides. Experiencing the change in light, the dawn chorus from the many unseen birds lining the route and the beauty of the sun emerging from clouds is a joy. This morning was no exception, with the colours being particularly beautiful. 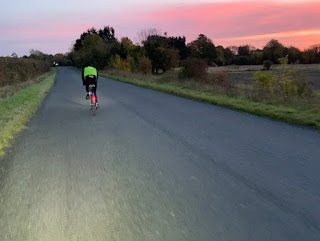 With the back of the ride broken the sight of the 'DNA' path - 10,257 lines of four colours representing the sequence of the BRCA2 gene - meant that Cambridge was but a step away.
At Cambridge station we saw some riders from a different group who beat us to it. Dr John and I said our goodbyes and thanks to Nick and Gordon and we bound the 08:03 train from Liverpool Street. At 09:15 we arrived back in London and shortly after Dr John and I said our goodbyes too. I arrive back home before 10:00 a.m. which I was rather pleased about. 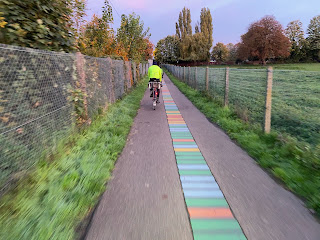 In all I cycled just over 83 miles and as I type this I feel pretty good. My Orange Titanium Brompton was a joy to use and along with my Orange, Black Special Edition I feel I have a wonderful stable of Brompton bikes for many adventures ahead.
Many thanks to Nick for the great route and being our ride leader and to Gordon and Dr John for their company.
Sadly, this might well be the last night ride of this type for 2020. October does traditionally mark the end of the night rides to the coast anyway, so it will probably be March 2021 before I can experience of the joys of these again. However, this will not stop several more adventures before the year is out.
Stay safe out there people!! 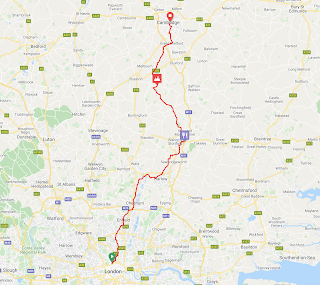