Beating the London Heat on a Brompton.

It has been hot the last few days and even broken records for the highest recorded temperature here in the UK. Yesterday I went to meet my Partner in Crime, Bumblebee and initially things didn't go to plan. 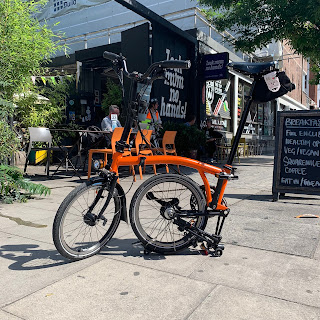 We were to meet the London Eye at 08:30 but having difficulty getting to sleep in the heat, I turned off the alarm that sounded on my iPhone and slept for another 90 minutes! When I awoke I fired off a few texts to Andrew to change the meet time to 09:30!

One of the great things about owning a Brompton is that it is truly multi-modal. Get fed up waiting for a bus, train etc.., and you can simply unfold and pedal away. Get fed up pedalling and you can fold and get a bus, train etc. You get the idea. If you have ever read my blog posts before, you will know that travelling by tube etc.., during rush hour is not something I like to do. So I decided to cycle the scenic route to the London Eye. A more direct route would be a great deal less miles but my Wahoo is quite brilliant at always choosing quieter - and it has to be said much more interesting -  routes. I therefore alway put faith in it and take its more scenic route option.

I cycled just under 18 miles and I enjoyed seeing a few old haunts that I have not been to for a while. I used to live not far from Portobello Road (if you have ever seen the film 'Notting Hill' with Julia Roberts and Hugh Grant lots of it was set in and around that area) and it was great to see the old place again. It brought back memories of me visiting Portobello Road market early on Saturday mornings with my dad buying all sorts of food items.

Arriving at Hyde Park I cycled past Kensington Palace and for once a Brompton rider cycling in the opposite direction, dinged their bell to say hello. They were on a rather nice looking greyish Brompton that might have been a W12 edition.

As I passed near St James and Downing Street there was a heavy police presence and in the distance I could hear someone shouting about Brexit but apart from knowing they were shouting something about Brexit I couldn't tell what they were actually shouting.

I arrived just after 09:30 and Andrew was waiting, having watched the world go by until I arrived. It was hot! All my water had gone and I suggested to Andrew that we retire for a suitable snack somewhere.

As we cycled along the Thames it seemed strange that there were actually lots and lots of people about. Previous rides we have been on have normally been at the weekend and quite early when less people are about.

We ended up at 'Look Mum No Hands' and wasted little time in ordering some food and cold drinks. It was Eggs Benedict for me which didn't last long. 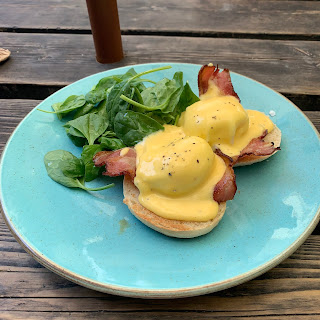 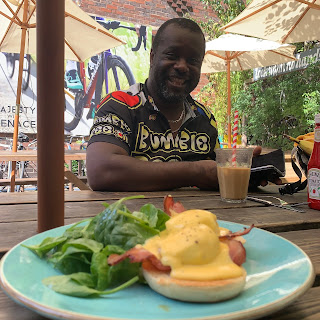 It was great catching up with Andrew again and I finally was able to hand over a set of brand new Marathon Plus tyres I had surplus to requirements for which he bought off me.

Feeling the need for more fuel I ordered a Chelsea bun which like everything else in 'Look Mum No Hands' was brilliant. 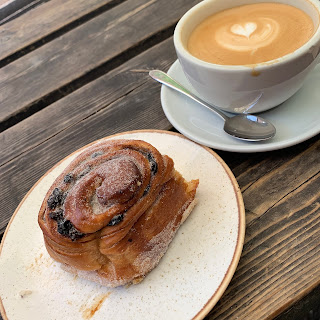 After that we said our goodbyes and went our separate ways - agreeing to do this all again when we were both free and able.

Knowing that rush hour was well and truly over I cycled to nearby Barbican tube station and made the short journey to ironically Ladbroke Grove which is but a step away from Notting Hill. There I found an old haunt, ordered an iced mint tea and sat down watching the world pass me by before venturing home. The wonderful thing about owning a Brompton is that you can do this effortlessly, knowing it is just sitting by your side, safe and sound... 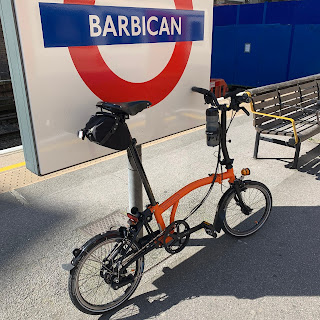