Look who I bumped into!

Of course I didn't actually bump into my Partner in crime Andrew AKA  'Bumblebee.' I had arranged to meet up with him for a few weeks and today was the day when we both were able to venture out and meet up at the London Eye - the start point for many adventures in the past.

It seemed likes ages - and it has been ages -  since we had seen each other. Far too long but then life does tend to get in the way sometimes. I think it is no secret that my Partner in crime had lost his mojo or whatever you call it for all things cycling. I've always believed that pedalling forwards is the way to go and I suspect my riding partner might now be in that frame of mind too.

Andrew sent a text to say that he was going to be about half an hour late so I decided to take the scenic route to the meeting point. When I rolled in at about 09:15 he was already there. It was great to see him again and the wonderful thing about friendship is that it is a little like pressing pause on a film or music track you like and then pressing play. Things are resumed almost instantly. 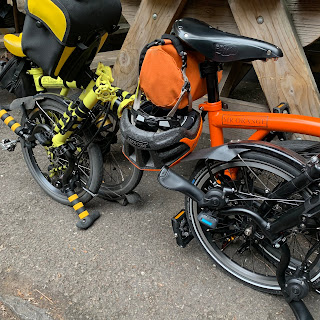 With both of us not having breakfast before we set off, we ended up at 'Look Mum No Hands' a old favourite. It was really busy when we folded bikes at about 09:30. Wasting little time we both ordered an 'English' which we ate with enthusiasm. 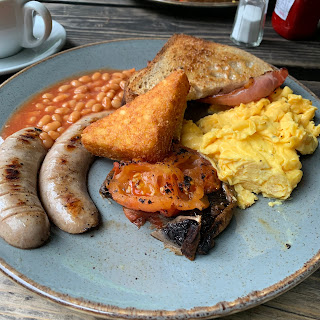 Of course 'Look Mum No Hands' also does pretty fine cakes so we both had one of those for good measure. 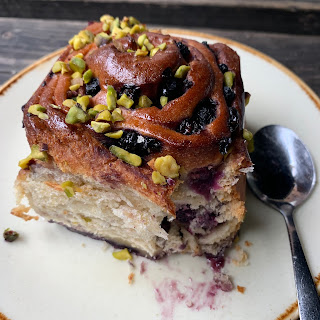 That done we retraced our steps back past the Eye and on to Hyde Park. We talked about all sorts and naturally caught up on all the tech and Brompton stuff too. 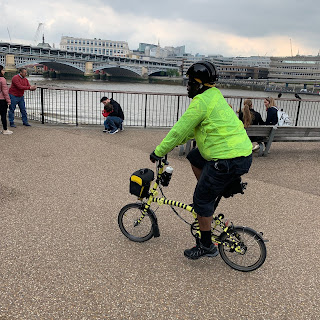 After a lap of Hyde Park we called it a day and pressed pause. I hope to be able to press the play button sooner rather than later. 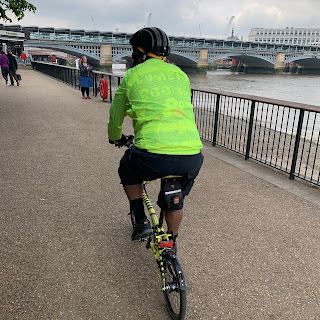 In all I cycled just over 18 miles this morning and thankfully there was not a drop of rain while I was out. It was great to see my Partner in crime again and I hope that I am writing about one of our adventures in the not too distant future.