This ride was slightly different to the night rides to the coast that I normally do insofar as it was to start in daylight. From my base in SW7 I decided nip across the road to Hyde Park where I would cross the park on my way to Paddington Station. The evening was mild and hundreds of people were taking advantage of the good weather, perhaps delaying their journeys to spend some time in the park.

I arrived at Paddington just before 20:30 and when I took the photo below I could see my fellow Bromptonians Geoff, Mark (King of the Hill) and Dr John waiting inside the station. Parts of the station and the main track shed was build by Brunel in 1854.

No sooner had I got in, the notice popped up to say that our train was at the platform and ready to be boarded. Wasting little time we made out way to our reserved seats. By chance I was to sit next to veteran night ride to the coast, Adrian. With my Brompton locked to the nearby luggage rack, I retired to my seat for the couple of hours the journey would take.


Geoff and Mark were in another carriage while Dr John and I chewed the fat about all sorts. A message came through from Mark that sort of indicated that there might be a buffet car. Dr John and I were out of our seats heading towards the carriage of Geoff and Mark wondering what we might be able to purchase. Sadly when we got to Geoff and Mark its became obvious that there was no buffet carriage. Later - back in our seats - a lady came down the isle with one of those miniature trolleys. As far as the buffet carriage was concerned, this was it! 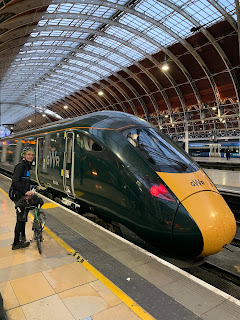 Our train rolled into Bristol Temple Meads station - also designed by Brunel - at 22:28. When I tried to unlock the cable lock I had used, to my horror I could not get the key into the lock! I attempted to do this a few times, slowly and carefully and then more frantically. I had visions of the train departing with me still trying to get the key into the lock. Thankfully it eventually worked much to my relief but I will not be using this one again and will think about buying one a little more expensive than the £2.99 I paid for it!


On the way outside I saw the Brunel inspired mosaic I had seen last time round and could not resist a photo. There was also one of the Clifton Suspension Bridge in which Brunel had a big part of play. 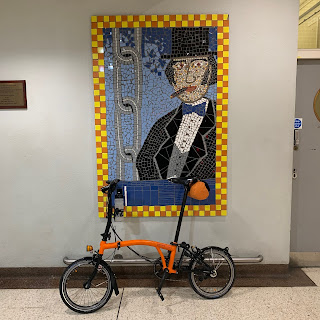 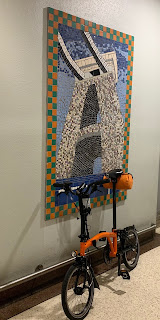 We made our way the the meeting point near Bristol Cathedral, with Mark giving us some information about what he remembered when he lived in Bristol several years ago. Bristol city centre looked busy to say the least. The presence of a couple of police officers on police horses hinted that things might get lively!

Of course I wasted little time in taking as many photographs as I could of the surroundings and if I am honest, using them shamelessly as the background of photos of my Orange Brompton! 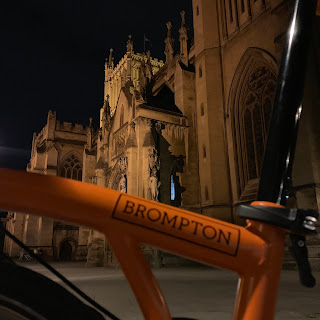 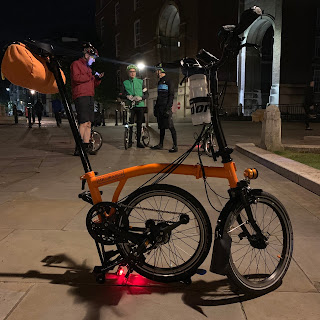 Our ride leader Steve provided some very good interactive safety instructions and when we heard the chime signalling midnight from the Cathedral bells, we were off. 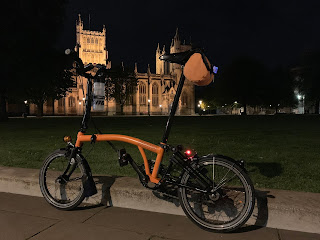 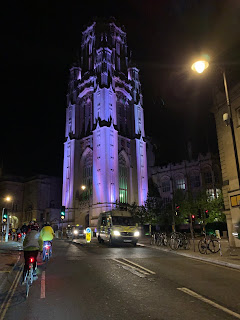 The ride would feature us crossing several bridges and liking bridges this was a very big plus point. The first was the Clifton Suspension. The original bridge was designed by Brunel with heavy design input from Willlam Barlow and John Hawkshaw. It now has a Grade I listed which will hopefully preserve it for future generations. 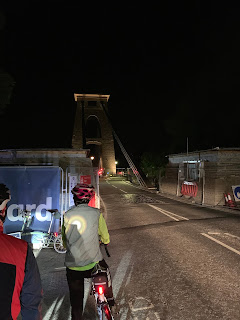 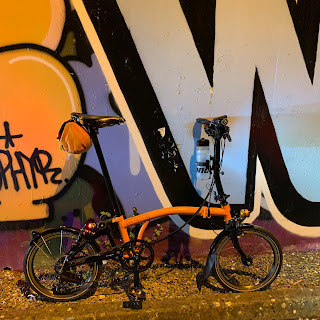 Not too long after the Clifton Suspension Bridge we saw the next in the distance. This was the Avonmouth Bridge. Opened back in 1974 it is almost 100 ft above the water below. I'd wager it would be an impressive thing to see in daylight but for our nocturnal adventure I could see little. 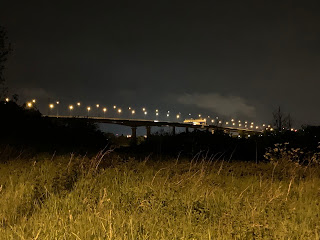 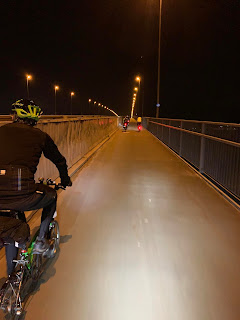 The Severn Bridge - 154 ft above the River Severn - had a great cycle lane segregated from the M48 motorway that it shares. 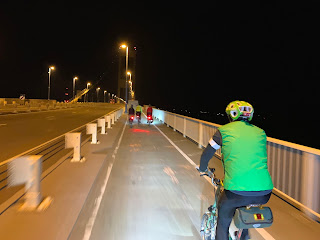 It was great riding in a Brompton quartet again. It felt like ages since this had happened. Sadly I fear it a rare occurrence as we have all dipped our toes into all that is road bike. 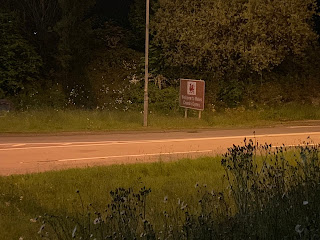 At about 35ish miles we reached the halfway stop which for us was a 24-hour McDonalds. It seems rather strange eating there in the early hours of the morning but it was functional. 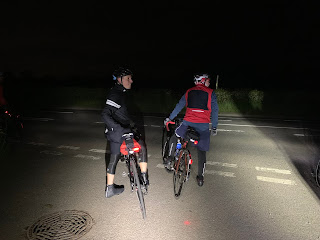 When we emerged from McDonalds dawn was approaching and I felt a little chilly. Nothing too bad and all I needed was a neck buff to see me through the first few miles. I had decided to take my Orange Brompton rather than my new Flame Lacquer. No particular reasons for this other than I didn't want to neglect my Orange Brompton. Geoff was sporting his new S6L Flame Lacquer so whenever I thought about my new bike, I just gazed at his.

At Newport we arrived at the Newport Transport Bridge. With less than ten of these left, this particular one is fully operational. It must be great fun to travel across on the platform. 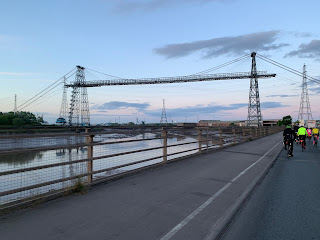 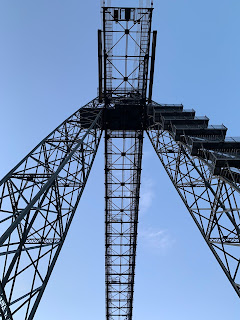 Wales is beautiful. The early dawn sky gave us many colours and few could resist taking a photo of the scene you can see below. 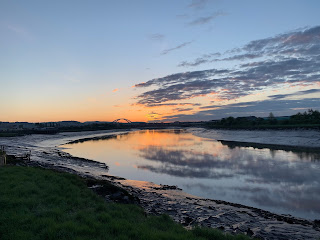 One of the things I saw the last time round were lots and lots of little ponies at the side of the road, tied up happily munching grass. This time I made it my business to try and get a photo of one or two of them. 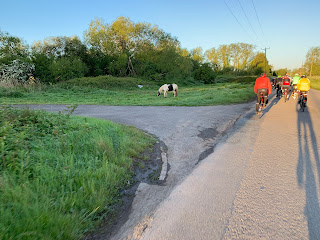 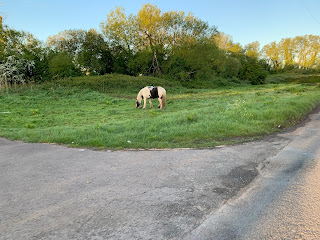 When I was on the ride last year, I decided to bail at Cardiff. This year as we were making excellent progress I pressed on and I am glad that I did. 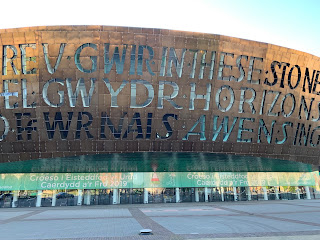 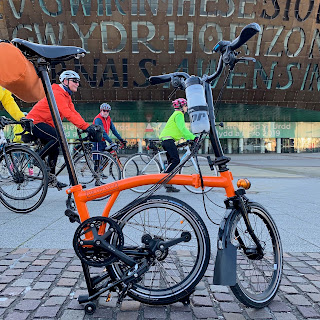 We cycled around Cardiff Bay with blue skies and the sun shining. It looked so pretty and I wish that I had of brought a better camera than that on my iPhone. 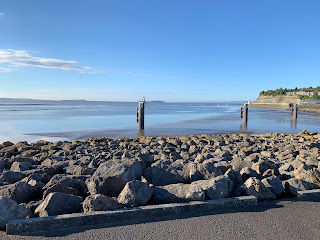 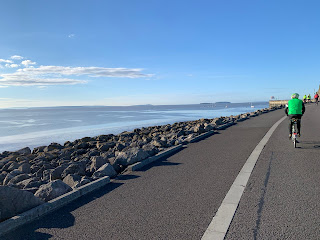 We approached Barry Island just after 8:00 a.m. and the clouds seemed to almost disappear from sight. With almost 69 miles clocked up it was a very enjoyable adventure.

Barry was used as a location for the BBC television programme 'Gavin and Stacey.' This was not really my thing possibly as I have never found James Cordon remotely entertaining. As far popular culture is concerned I was more impressed that the third, forth and fifth series of 'Being Human' was filmed there.

Geoff stayed to have some breakfast as visit relatives and would make his return later in the day. Mark, Dr John and I had to be back at Cardiff for out 9:26 train back to Paddington. Saying our goodbyes we made out way to Barry Station to get the train to Cardiff Central.

Thirty minutes later we arrived at Cardiff, got some food and boarded the train. On the platform there were loads of people with suitcases and when the train pulled in we ran (as best you can with a Brompton) to the carriage with our reserved seats. Being such a long train we were all spend out evenly and our seats were next to the racks.

The journey was two hours and during that time the three of us nodded off more than a few times. Pulling into Paddington Station at 11:30 a.m. we had made good time. Saying our goodbyes we made our separate ways home.

This was a lovely ride and thanks to Steve for leading and Adrian for his tail end Charlie duties. As I wrote previously it was great for Geoff, Mark, Dr John and I to be riding together on our Brompton bikes. Mark likened us to a band getting back together again. I wonder whether the same metaphor would have been used had we all been on road bikes all those years ago when we first started this night riding to the coast lark? Until next time... 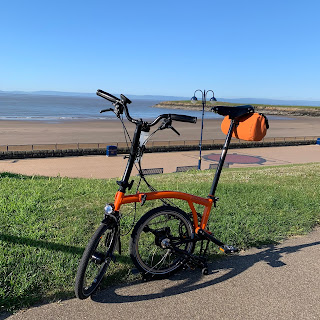