The rendezvous was the London Eye at 19:00. As I tried to negotiate the streets of London on a Brompton, I speculated as to whether I would make it to the meet point? Was I being followed? Was the cycle rickshaw driver who cut me up on Oxford Street, trying to stop me from making my schedule or was it just coincidence? So many questions...so many possibilities.

A crowd at Trafalgar Square made me pause momentarily. I instantly assessed the situation calmly and clinically. I concluded it offered no threat as I saw it was just people watching a mime artist with a golden gun.

When I reached Whithall my suspicions that I was being followed were all but confirmed. Several bicycles swarmed around. A couple of roadies dressed in black tailed me - I am almost certain of it. I accelerated like a thunderball at the traffic lights and managed to shake them off however they soon caught me up. One to my left. The other to my right. Waiting for the lights to turn green was tortuous. The rider to the right said, "you're pretty fast on that Brompton." I couldn't quite place his accent and merely nodded my head in acknowledgement. I waited for their move, that surely must come. I looked left and right with my eyes, not daring to give away the fact that I was watching them, trying to second guess their next move!

As the lights turned green I had made up my mind that I would power off, out of the saddle and take flight. Having competed in the Brompton World Championships, you could call me an international world class cyclist. If they were going to intercept me, they would have to work for it. After all, you only live twice. Riding a bespoke and custom made Titanium S6L Orange Brompton - yes I might have stood out like a sore thumb - but I had the right bicycle for the job.

The two roadies powered off into the distance and were swallowed by the night. I cursed as my foot was unable to engage the cleat on my left Shimano XT SPD XC Race M780 pedals. That misfire saved me...as a police car rolled up beside me and perhaps scared the roadies off?

Some might say that my route to the London Eye was of someone who was close to being hopelessly lost. Others, in the know, would realise that it was of course the route of someone not wanting to be followed. Someone laying a false scent.

I arrived at the London Eye in good time. Approaching the rendezvous, I turned off my Cree 1800 lumen front light as I knew a stealthy approach was needed. In addition I didn't want to scare the living daylights out of onlookers. Thankfully I saw some familiar faces. There were a couple of new ones. Dion, our man in South Africa had jetted in a few days ago. Stefan, our man in Berlin but now living in London was also there. I thought of coming out with the old code phrases: In the Cape the cycling is hot; In Berlin I cycling is a cabaret old chum but I thought better of it and just said, "hello." 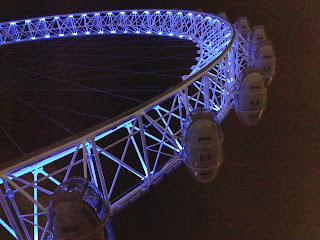 After a mission briefing David, Anne, Bumblebee, Mark, Geoff, Chris, Ben, Guy, Jeremy, Dion, Stefan and I set off. Unfortunately, we received word that Robin had sustained, "a puncture." For people in our line of work this meant he was compromised and had to abort. I just hope he was...okay?

As we set off in our Brompton peloton we attracted some unwanted attention from the civilian population. Luckily our cover story - that we were a group of friends in a Brompton club, simply going out for a night cycle in London with the goal of trying to cross as many of the bridges that span the River Thames before midnight just because we could - seemed to hold. 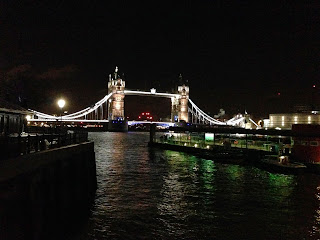 The bridges came thick and fast and a relentless pace was set. On the South Bank we glanced across at the Houses of Parliament. How many people even in that location would know what we were doing and where we were going? Who would have guessed we were on her Majesty's secret service? Ironically, we also passed the MI6 building. I could write more about this location but my silence conveys a thousand words. 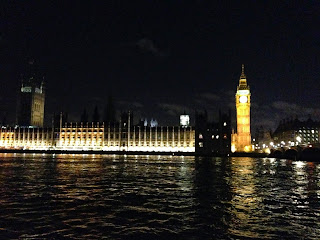 In all we crossed Tower, London, Soutwark, Millenium, blackfriars, Waterloo, Westminster, Lambeth, Vauxhall, Chelsea, Albert, Battersea, Wandsworth, Putney, Hamersmith, Chiswick, knew, Twickenham and Richmond Bridges. Albert Bridge with its many lights sparkled like jewels. Diamonds are forever and I imagine Albert Bridge will continue illuminating the night sky for many years to come. 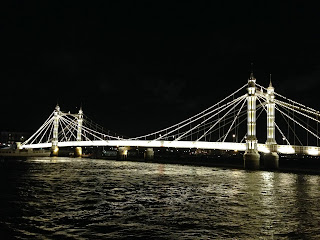 At Wandsworth we stopped at a Mcdonalds Drive Through. They did not have a favoured drink on the menu so I had to settle for a fruit smoothie. I asked for it to be shaken and not stirred but 'Hitendra' just stared blankly.

Unfortunately there were a few casualties. On a job like this it is inevitable. Geoff, Chris and Ben didn't make it to the end. As I type this report I can confirm that all have signed in and are okay. As I am sure you can appreciate I won't divulge the finer details of what happened to them.

Reaching the final bridge at Richmond which had a view to a kill we had come to the end. Saying our goodbyes quickly and without lingering we dispersed in all directions. We took different routes, different trains. I travelled with Bumblebee. Surveying his bike I spotted all too familar sight of sabotage. The wall of his rear wheel tyre had started to peel away from the rim. Where had this dastardly act, perhaps in an attempt to slow us down been perpetrated? My guess...when we stopped at McDonalds.

The mission was a success. We had managed to cross copious Thames Bridges and were skillfully guided. It was good to see our man in South Africa who now goes to Holland for an altogether different mission. It was also good to see our man originally from Berlin. Hopefully we will see him again? As always seeing familar faces is good and I only hope we can regroup soon for our next mission. As for me, would I do this ride again? Never say never again, would be my reply...

Thames Bridges Ride Map and Ride Data - For Your Eyes Only
at December 01, 2013