The meeting point for this ride was Kew Gardens at noon. As I had to be in Richmond earlier than this on an errand, I decided to take a spin around Richmond Park. I more or less had the place to myself apart from the club roadies who as usual for the weekend were out in force. I managed a respectful 16.1 mph average for the two laps I attempted and was pleased that I claimed a few scalps on the big hill.

I cycled the short way back to Kew and bought a coffee from a well know establishment, which also served as out meeting point. While in line waiting for my coffee to be made, I was set upon by two elderly blue rinse ladies who wanted to see how heavy my Brompton was. I let them pick it up, but they did so as part of a tag-team, being too frail to lift it individually.

Retiring outside to the seating area, as it was a particularly lovely Saturday morning, with Brompton folded by my side I say and watched the world go by. I didn't watch for long! A Titanium Orange Brompton must be like a small, cute puppy as several people either passed comment about my bicycle or asked questions about it. Being an unpaid and perhaps unacknowledged ambassador for 'Brompton Bicycle' I did my bit and left them wondering why they too needed this most brilliant forms of personal transport.

Before long those on the ride gradually began to filter in and the number of Brompton bicycles and owners swelled. Our leader for this particular ride, Bob - a great character who really should come on more rides - arrived and was soon mustering the troops.

This was to be a ride with a theme. Bob had carried out a huge amount of research to take on locations very specific to the history of the Brompton bicycle. Some locations simply had Brompton in them, while others were the stuff of legend. By the time we set off there were 18 of us and we headed to our first location with more than a little excitement in the air.


The first location, not too far away from Kew Gardens was the Old Powerhouse. This was one of the first locations Brompton bicycles were build and in 1982 one of the coldest winters of the 20th Century conditions must have been pretty tough. Andrew Richie commented that the snow came in under the doors and and lay three feet deep in the brazing area! The Old Powerhouse is now like some many former buildings with an industrial past, fashionable flats. I wonder if any of the occupants own a Brompton and whether they are aware of it association with the brand?

As always the sight of Brompton bicycles in large numbers must be an assault on the senses for those looking on. All 18 of us carefully guided by Bob made our way safely through the London traffic to our various locations. 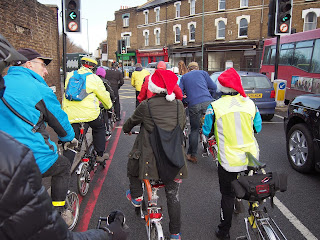 Green railway arches in Brentford provided our next choice location. It was within these arches that Brompton bicycles started to be produced in sizeable numbers. One of our number had a 1987 Brompton and speculated as to whether it might have been produced there? I like to think that it might have. 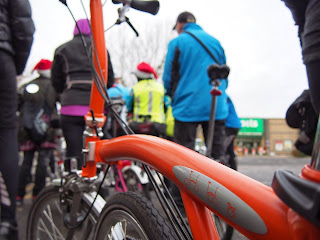 Our next location wasn't too far away but brought us up to the modern day in the form of the Brompton distribution hub. For the moment at least, Brompton bikes are sent out to all corners of the globe to eager customers. 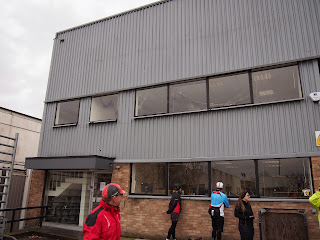 In the window of a very discrete building we spotted a detailed miniature Brompton bicycle. This caused much fuss with many wanting to hold it and photograph it. Bob tirelessly continued with his well thought out Brompton facts as this near paparazzi activity went on. 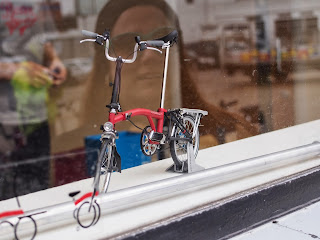 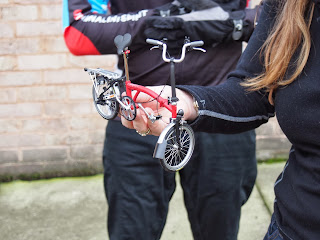 I could not resist taking a photo of my bicycle next to a large pile of metal, the colour of which for some unexplained reason caught my attention? 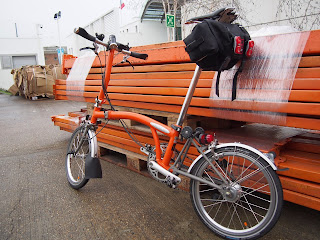 Keeping up with the here and now the next stop was perhaps the one many had been waiting for - the Brompton factory itself. Even though I visited the factory and been fortunate enough to go inside, there is just something about this location. It is from here that at least 17 of our Brompton bikes were made and of course where it all started for three of the Brompton bikes I have bought over the years. 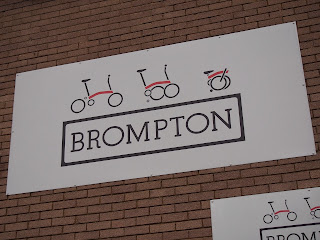 It only seemed fitting to take a shot of Brompton bikes lined up in formation but I chose my usual favourite angle. 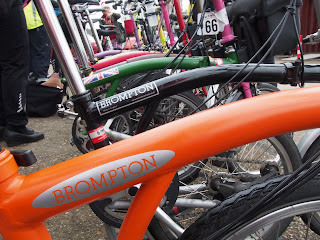 The Brompton peloton was relentless and every so often I stopped to take the odd photo. It was great to see so many familiar faces and meet a few new ones and the bikes looked wonderful. 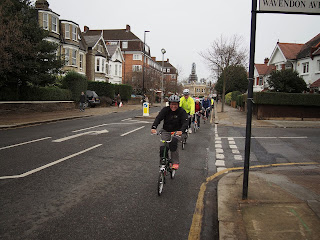 One rider had a large bulge in his rear tyre, spotted by an eagle eyed Bromptonian. He was to later buy a new tyre at Brompton Junction.

The weather was great for this ride and we were lucky. Perhaps Bob had even organised this for us too. The route was interesting and there was lots to see on our way to the various locations. 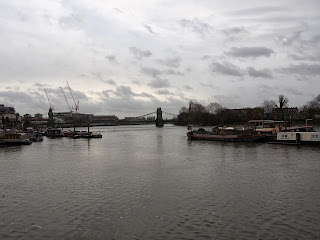 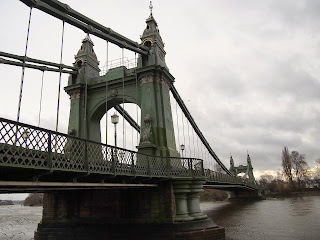 Stopping at Bowerdean Street, SW6 Bob informed us that this was the address where 'The Brompton Company' was first registered. 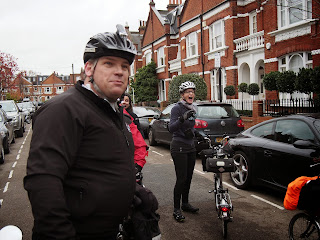 Our progress to Brompton Cemetery was slowed down by football supporters going to a home game. The cemetery doesn't have any direct association with Brompton other than its name but it was nevertheless an interesting location. It is one of the great seven Victorian cemeteries in London and like my favourite - Kensal Green - is home to some rather famous names. 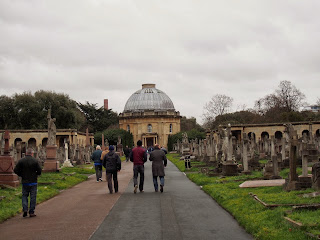 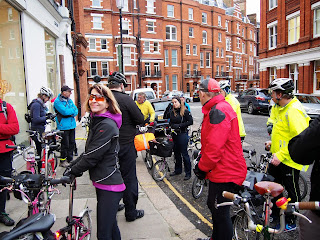 Soon we arrived at one of the key locations for all Brompton geeks - the Brompton Oratory. It was from his flat that the young Andrew Richie could see the Oratory and named his bicycle accordingly. 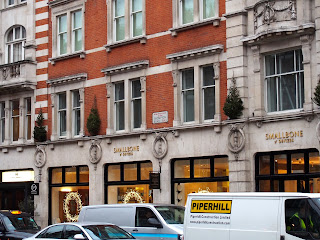 Just across the road was the no longer used Brompton tube station. During WWII is is said that Rudolf Hess was brought here and interrogated in the basement. It has very recently been sold for £25 million and will I am sure become very expensive and exclusive flats. 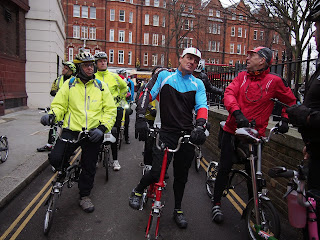 Our key locations ticked off our final destination was again taking us up to the modern day - Brompton Junction in Convent Garden. As we neared Buckingham Palace I could not resist taking a photo of some Santa's on Boris Bikes. We had seen lots of Santa's on our travels. In cars, on foot, roller skates and even some on the Thames rowing. It was a charity drive and like us on our Brompton bikes, they looked as if they were having fun. 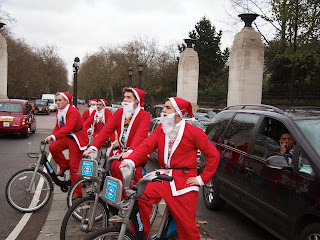 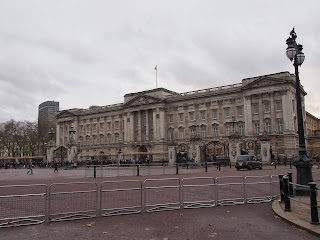 Cycling along The Mall I was able to cycle along at speed. I managed to reach just over 27 mph before traffic ahead and running out of road slowed me down.

Arriving at Brompton Junction we were welcomed warmly and soon treated to some pretty good sandwiches, tea and mince pies. Brompton Junction is a showcase for all that is Brompton. It sells lots of Brompton goodies as well as housing a great little cafe. (It has a full workshop but don't expect to take your bike there for a repair or having parts fitted as they only carry out full factory services. You'll need to go to your local dealer for that).

The bar stools are great. I am not sure that pedalling has any effect on the seat height but it is great fun while you're waiting for your pot of tea! 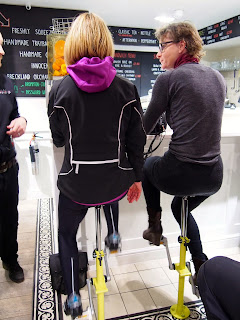 I had not been to Brompton Junction before and I must say it a brilliant place. I can see myself back there again. for me it was a little like going to the Apple Store and there was that sense of excitement and wonder. 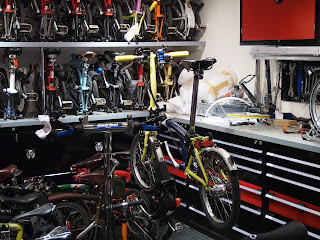 Towards the back of the cafe, two original Brompton bicycles are lined up in pride of place. They were red but to my eyes at least there was a hint of orange in them?

After chewing the fat for a while I made my exit with David and Anne to visit the Brooks shop not far away. It was a really great Brompton fest and Bob really does need thanking for organising a great  ride that had it all - even the weather. Brompton Junction also need a special mention for allowing 18 Bromptonians to descend upon their shop and treating us so well. (If you are in London, you have to pay them a visit)!

Bob's Brompton themed is one I hope that he does again another time (hint Bob). With a Christmas ride planned for next week, I hope to see Bob again and some familiar faces. This particular ride is one of my all time favourites and will be rather special in more ways than one...

I would love to tell all but you will have to wait for my blog post.