This morning I joined the Fridays for their Christmas ride. The meeting point was the usual Hyde Park Corner but it wasn't a Friday and we were not to be cycling through the night to the coast. It was going to be different.

Cycling up The Mall I saw lots of tourists getting their vantage points for the changing of the guard. I couldn't resist taking a picture of a young solider on duty outside St. Jame's Palace.


When I arrived at Hyde Park Corner I saw some familiar faces, some hardend veterans of many a Friday night ride and a few Bromptonians from our club. The weather was very jolly. It was a beautiful crisp and clear morning and obvious that it would remain like this for the entire ride.

Again I decided to take my Original Orange Brompton with me, mainly as I knew I'd be taking lots of photographs and the more upright M-type might assist in that task. The last time I was out on any of my Brompton bicycles was on last weeks all night ride and it was good to be on two wheels again.

David and Anne were also on the ride and David was showing off a Brooks saddle roll he got for Christmas. I have to say it looked pretty fine!

As we waited for the off, a small detachment from the Household Cavarly rode past. It seemed quite fitting that they did so under the nose a statue of his Grace looking on and almost taking the salute.

Cycling through Hyde Park on such a glorious day was fun enough but this was going to be a mini tour of architectural high points by an architect of distinction. As such I was keen to see what treat was going to be first?

Our first stop was a public lavatory at Westbourne Grove. Desgined by Piers Gough of CZWG it came about by local residents taking umbrage at the local authorities plans for a public convenience on a traffic island. Wanting something more becoming they hired Mr Gough to come up with something more befitting. His Turquoise Island certainly achieved that. 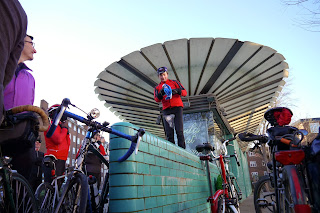 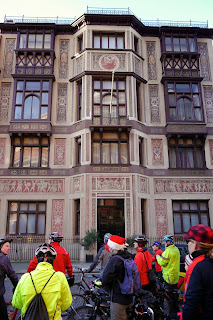 Not on the list of buildings we were paying special attention to on this ride was the Royal Albert Hall. It has always been a particular favourite of mine. The nearby Albert Court was once the home to Howard Carter of Tutankhamun fame. As a child I remember hearing stories from a few very elderly residents who actually remembered him.


Next was the Natural History Museum. When I was little I can remember spending hours in there and its interconnected museums. A certain young rogue who will not be named used to surreptitiously crush the glass vial of a stink bomb under foot, walk to a suitable distance and observe the reactions trying not to giggle. Quite shocking!

The Natural History Museum was designed by Alfred Waterhouse and I was shocked to discover that it was a steel framed building with a tiled frontage! Despite this, it remains a stunner!


Michelin House on the Fulham Road, designed by Francois Espinasse features the Michelin Man Bidendun and must be one of the best long term company adverts. It acted at the UK headquarters with this building opening in 1911. They certainly don't make them like this any more.


The Danish Embassy building was designed by the Danish architect and designer Arne Jacobson. In 1971 he died unexpectedly so the building was completed after his death.

Lambeth North Station was originally Kennington Road. Designed by the architect Leslie Green it opened in 1906. Leslie designed over 20 London tube stations all much the same. Steel framed and fronted by the distinctive ox-blood tiles.


As we made our way to Spitalfields for our next destination we approached The Shard. I have been quite scathing in the past and I have yet to soften my view. I currently liken it to a glistening trinket a footballers wife might wear.


With one of our number repairing a puncture we waited on a bridge and I took the opportunity to have a snack and take a few photos of the views. 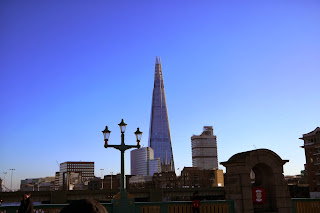 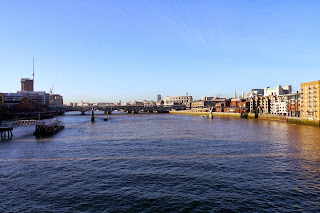 Approaching the City some of its new offerings glinted in the winter sun. A particular favourite of mine the Gherkin looked rather splendid as it reflected the light. 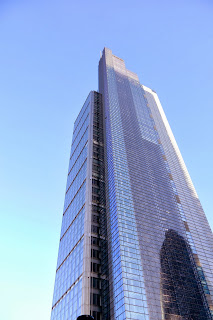 Our penultimate building was Christ Church Spitalfields. Built between 1714 and 1729 to a design by Nicholas Hawksmoor. Stunning of the outside I have always admired it from afar and the inside - a place I had not been before - in no way disappointed. Elegant is the adjective I would choose. 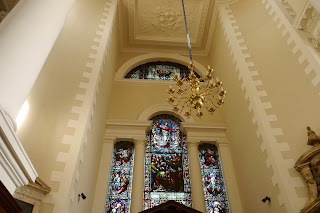 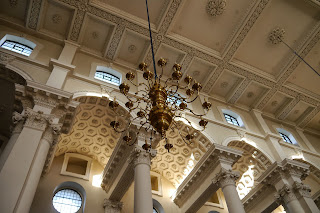 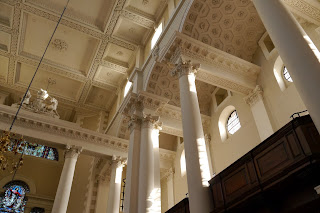 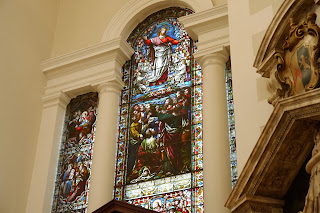 Our final building - and it was a shame that it was our last - was The Blue House in Hackney by FAT (Fashion Architecture Taste). The Blue House consists of house and an office and the design seems to reflect this double use. The facade, almost cutout of a house sits in front of an office block.

A poor dog took a great deal of interest in this large group of cyclists pointing cameras at its house and kept coming and going - perhaps to see if we were still there. 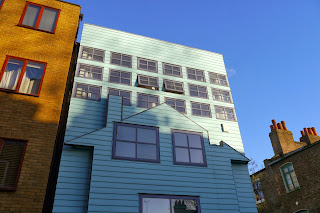 After this many went to a local pub to partake in a well earned drink. I couldn't go as I had to get home and proceeded to where I had parked my car. On route I could not help but take a few photos of some more buildings. 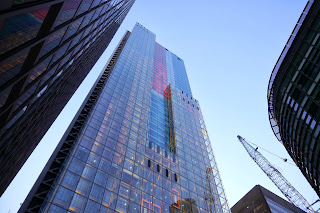 This almost certainly marks the end of 2013 in terms of cycle rides. What a way to end it! This was a brilliant ride and a wonderful idea. Our leader, Simon an architect himself, was as knowledgeable as he was enthusiastic and I came away learning a great deal but also having lots of fun. So Simon, many thanks!!

This ride must be something that you out there reading this, wherever you live, could probably do too. I'd love you to send me a picture of an unusual building or perhaps your favourite one from where you live so that I can share it on here!


Fridays Tourette of London map and ride data
at December 30, 2013