Dr Who 50th Anniversay Special - No I'd rather be out cycling!!

The past week has been quite a build up towards the 50th Anniversary of Dr Who. Saturday night marked the culmination with a special anniversary programme that was even being shown in cinemas across the country. I have always been a Star Wars fan. I mean how can a Sonic Screwdriver compete against a Lightsaber or the Police Box against the Millennium Falcon?! As such, a cycle ride from Kew Gardens to Box Hill was something I wanted to do more.

I made it to Kew Gardens in good time and before long David, Anne and Bumblebee rolled up to where I had parked. With some last minute adjustment of my saddlebag we were off. The pace was brisk and purposeful - the way I like it. Anne had recently changed to clipped in pedals and by the halfway point was suffering slightly. There is always some adjustment to these pedals and I am not sure I have fully adjusted to them either. Stoically she carried on.

The weather was pretty good throughout the night. It would be slightly over 50 miles and although there was a fine rain at times, it didn't cause concern or a reach for waterproof clothing.

There came a point in the ride where we had to cycle along a bridal path. The wet weather of the past few days resulted in places that were quite shocking. As we travelled through there was one point that could only be likened to quicksand! Anne cried out as she was unable to traverse through. I had images of her sinking slowly, me telling her not to move and trying to find some sort of rope to pull her out with! Luckily she found traction and managed to free herself.

Many bridal paths are not often used my horses and riders. I can report that this particular bridal path in terms of horse use must be like Oxford Street at rush hour. Horse droppings littered the floor and I was again thankful of my 1800 lumens dispensed from my humble Cree light!

With tarmac in sight we cleared the 'badlands' and proceeded ever forward. We approached Epsom town centre and saw a Christmas tree. It provided a perfect photo opportunity, so we dismounted and positioned our bikes. As we did I speed several young men in the distance and knew that the draw of four Brompton bikes would be too much temptation to resist!

Sure enough they came over. I feared the worse - having lived a sheltered life - and moved my bike out the way. They wanted a picture taken with them and the bikes and David obliged. Anne and Bumblebee got in the shot with them but thankfully I did not. My fears were ungrounded as they were quite nice chaps and with our own photos taken we were off again.


With Box Hill not too far away we made a wrong turn but back on track it wasn't too long before we reached this famous location where last time I was walking due to my chain snapping. This was revenge and would be the first time I had cycled up Box Hill on my Titanium Orange S6L Brompton...at least that was what I hoped would happen.

I stopped to take a picture of the Box Hill sign while the others continued to cycle up not wanting to break their rhythm. I set off too. I felt pretty good and the cold which I have been carrying for the last five weeks didn't dampen my enthusiasm for tackling Box Hill. 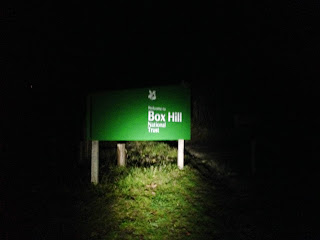 I soon passed Anne and Bumblebee and even David. I would however point out that David was going up Box Hill without a light as it had died on him. I suspect if his light had of been working and he could have seen the way, he may well have been in front of yours truly.

Cycling up Box Hill at night is a strange experience. It is pitch black and eerily quite. Even the bicycle sounds slightly muffled - perhaps due to the very new and super smooth road surface? The only sounds were the odd owl hooting and the sound of ones own breathing.

I managed to maintain a very steady pace when ascending Box Hill. I was also loving the challenge. The ascent seemed to go on and on and felt much longer than the previous times I had cycled up. It was preferable to walking up it as I did last time. After what seemed like a never ending series of turns and inclines I saw the summit. This was a relief! I had done it!! Box Hill was conquered yet again without a foot hitting the ground. Revenge was mine and I had done it!

Again I feel that my fitness and endurance has improved greatly since first cycling up Box Hill. There is still a great deal more I can do and I will have to work much harder to achieve what I have planned for the tail end of this year and 2014.

David and I headed for the 'Smith & Western' - a western themed pub/restaurant not far from the summit of Box Hill. Not too long after Anne cycled in. Despite one of her knees providing some problems she made it in good time. A little while later Bumblebee rolled in.

I wasn't actually going to have a great deal to eat when I sat down inside but I felt quite hungry. In addition I had not taken any of the small snacks I usually graze on throughout the ride - as I forgot to pack them. Not wanted to succumb to the dreaded 'bonk' I decided to eat and the New York burger was just what I needed. Along with a lemon ice cream sunday I felt refuelled and ready for the return home.

As we ate I listened with interest to a country and western version of 'Paradise City' by Guns and Roses. It took a few seconds for me to even register what the song was and why it was familiar to me.? I concluded that I preferred the original.

My sense of direction let me down again. Wanting to go to the toilet to freshen up, I took a wrong turn and ended up in the staff serving area where food and drinks are made ready to be taken out. A tolerant member of staff said, 'can I help you partner?' With the directions to the toilets in my head I made it there without further incident.

When we departed from the 'Smith & Western' my mind was taken back to the many Friday night rides to the coast. Always after being inside and doing out I end up being freezing cold. This ride was no exception. The night air seemed colder and as such I put on a light jacket and a Helly Hanson balaclava. This is by no means a flattering garment!

We set off at again a brisk pace and before long we were back at the badlands! It was as if a herd of antelope had run through this bridal path while we were gone as the ground seemed even more churned up! Desperately trying not to be OCD about my beloved Titanium Orange Brompton becoming filthy...again was hard. A large rat ran across my path which almost caused me to fall off. The quicksands appeared to be everywhere and I fancied we needed the help of a 'local' who had years of experience navigating safe routes! Luckily we all made it to the other side.

Not wasting any time we headed back towards Kew Gardens at all speed. As always onlookers gazed in disbelief at Brompton riders in full flight. We arrived back at Kew about about 01:40 which was pretty good. Saying our goodbyes we headed off to our cars and the soon to be sanctuary of a warm bed.

This was a great ride. Again thanks to my fellow riders but especially David who again navigated us safely up front. The pace was good and I was happy that I felt I could have gone much faster or survived without so many stops.

I have signed up for the one day of the Mitie London Revolution which is a 100 miler in May 2014 and I will need a great deal of training from now until then. (BumbleBee has signed up for the second day as well which adds another 85 miles. He is going to have to put in the work to complete this). The good thing is that reaching the car at almost 52 miles I could have gone further. This particular ride featured lots of hills - something I love having a go at on a ride. All the rides I have gone on this year so far have definitely helped me towards bigger rides. I will have to make sure that in what remains of 2013 I continue to get out there and cycle and get in lots of hill training.

My ride data and maps can be viewed by clicking on the link below. You can also have a look at the link below that for a past blog post  detailing what happened last time at Box Hill!!!


What happened the last time I tried to ascend Box Hill...