Last night I arranged to meet my good friend and riding partner iCrazyBee for an early morning ride. Apart from meeting at the Royal Albert Hall there was no particular set plan of action.

Shortly after 08:30 we headed off for a couple of laps of Hyde Park. The early morning start meant that the sun had not had the chance to shine through as it would do later on in the day. As a result there was a nip in the air when compared to our recent glorious weather.

We cycled towards St Paul's' Cathedral and crossed the Millennium Bridge that leads to the Tate Modern. From a distance there were dozens upon dozens of tourists walking very slowly over the bridge all going in the same direction. There was not a soul to be seen anywhere else. This looked liked a scene from 'The Walking Dead' and for a brief few seconds was quite menacing.

Once on the bridge we took a few photos. I had my new Ricoh GR which I am still loving and as usual with Ricoh GR cameras still finding out new features and functions to play around with. 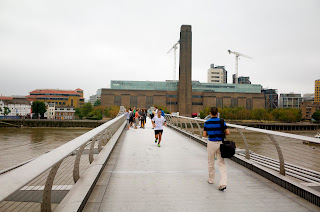 After the bridge we headed to 'Look Mum No Hands' where we both had a rather tasty breakfast. After chewing the fat for a while it was back on the bikes and the short cycle to the heart of the city.

If you are ever in London one of the best places to visit early on a Sunday morning is the city. During the week this location would be unbelievably busy but on a Sunday it is all but empty.

The Gherkin is a particular favourite of mine and I always like taking photos of it. Depending on the time of the day you can often take photos with all manner of reflections in them. 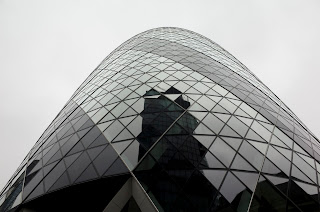 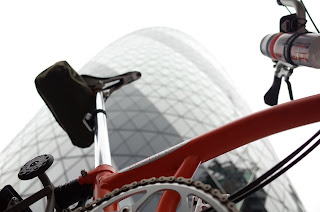 After we both took loads of photos of various buildings we said our goodbyes. I continued to take a few more photos of the Lloyds Building before heading to Temple Church and then back to South Kensington.

The more observant of you will notice that my original Brompton pedals are back on my bike. These are going to stay on until for the foreseeable future. My knee, although feeling almost back to normal, most certainly isn't 100% yet.

As much as I like the clipped in pedals and can see their benefits if they - for me at least - induce knee pain they just aren't worth having on. On the way home I got chatting to a couple of roadies at a set of traffic lights. One of them was an America gentleman who also owns a Brompton (but back in New York where he usually resides). I talked about the Whitstable ride and my knee pain. The American chap said that Speedplay Zero pedals are pretty good as they offer lots of float for ones foot to move. He said that he rides a bike like Donald Duck (ankles inward slightly) and he is able to move his foot around a fair degree. I know that my feet are positioned in much the same way. After demonstrating this on the pedals he had fitted to his bike they certainly did allow more movement than SPD's. This will require further investigation.

This ride was exactly what the doctor ordered and I am certain that it did me some good. The Brompton World Championships starts on Saturday and I am going to slowly ease into some light training.