Nocturnal Ride to Thames Flood Barrier and Back

With good behaviour  Mrs Orange Brompton allowed me to venture out on a cycle ride in the early evening. I didn't really know where I wanted to go. Round the block, Hyde Park, Richmond Park or perhaps further? I settled on Box Hill. At short notice I didn't really expect anyone to come but my riding partner iCrazyBee showed some interest, found out it was a 40 miler and declined. I was going to go it alone to Box Hill and had a few maps printed off and the route stored in my iPhone. I then received an offer I could not refuse...

Mark (King the Hill) suggested that if we met at Charing Cross at 21:00 we could cycle to the Thames Flood Barrier and back. How could I refuse? With a long demanding ride (with plenty of serious hills) for the 13th July the 120 mile Dunwich Dynamo the week after and the BWC the week after that, I felt I needed to up my game.

On my way to Charing Cross I cycled down Oxford Street and Regents Street having to negotiate huge numbers of cycle rickshaws. I cannot say with all honesty that I like them. The riders of these cumbersome three wheeled machines are as rude as they are reckless and do not seem to care a great deal about the highway code let alone other road users.

I met Mark at 21:00 and we soon set off on our nocturnal ride. Memories flooded back of past rides - there have been so many. The ride to the Thames Flood Barrier is among my favourites and cycling it at night added another memory for the little grey cells to mull over.

At Tower Bridge I could not resist taking a photo or two. I was carrying light so just took my iPhone and I am always impressed by the why it performs. 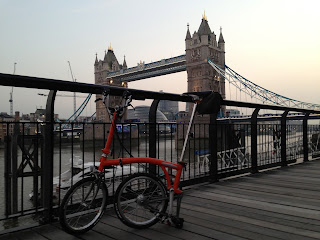 Cycling further along we came to some more lovely views of the Thames that deserved a photo or two and as we cycled further east Canary Wharf came in to view and looked resplendent in its night attire. 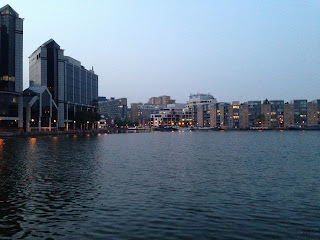 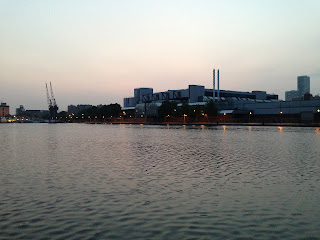 As we progressed further east thoughts turned to Saturday. Mark was apprehensive about it. It will three of use cycling from Charing Cross for 30 miles. The route will be demanding with some very long and steep hills. At the 30 mile point we will meet other riders who will have got the train from London. After catching our breath it will be another 49 miles to Whitstable. We have cycled this distance but this would include cycling to and from the meeting point and finish. This made me think about it too. Have I done enough? Have I put in enough miles? Can I do it?

Reaching the Greenwich foot tunnel was an interesting experience on a summers night. As we descended the temperature dropped and it was as if the tunnel had a very expensive air conditioning system. It made a refreshing change from the outside and we looked forward to coming back the other way.

We pressed on to the O2 going ever further east. Just before reaching it we turned to see a green laser stretching out from the Royal Observatory.

Reaching the O2 we knew that the Thames Flood Barrier was not too far away. As we cycled past it was remarkable how different things looked at night compared to daytime. The Thames cycle path is well lit and makes a really good night time ride. 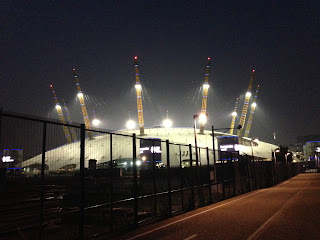 We reached the Thames Flood Barrier in good time took a few photos and then made the journey back to London. I have to add at this point that Mark lives near Greenwich. Such is my shameful navigation skills Mark selflessly cycled back so that I wouldn't get lost - as I surely would have! 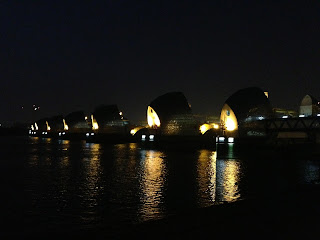 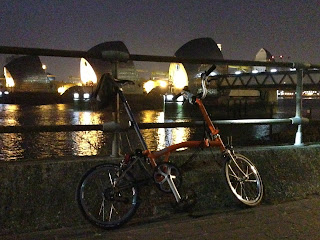 At Charing Cross we said our goodbyes and knew that the next time we would meet would be next Saturday for a demanding days cycling.

It was a good nights cycling and served on perhaps a psychological level to make me think that it was good prep. Next week is going to be a very busy and demanding one at work. It may be that I will not even be able to cycle at all as I have to carry back and forth various papers, files etc.., that would be too heavy for my Brompton bikes. I hope that I have put in enough work for this ride...

Map and ride data for Nocturnal Ride to Thames Flood Barrier and Back
at July 07, 2013