Today I went on the Tweed Run. I was quite excited about this as I had not been on it before and didn't really know what to expect. A few weeks ago realising that I got into the Tweed Run - which you have to win a place by lottery - I decided to get my outfit together.

The tweed jacket was easy. When at university I bought a tweed jacket with all the best intentions of wearing it - as you do. I didn't and it has sat in a wardrobe for many years. Tweed waistcoat, shirt, MCC tie almost completed the package. The only thing missing was a suitable pair of trousers, plus eights or whatever I could find. It came down to whatever I could find and in my case a pair of corduroy, cropped riding breeches. I feel I must explain these in more detail. They are snug to say the least! I would go as far as to say they would be something a character in one of those racey Jilly Cooper novels might wear.

I headed off to the Royal Albert Hall and knew that I was in the right place as someone wearing full tweed everything, teared past me as I attempted to get my leg over the cross bar of my Brompton (see above about corduroy breeches) shouting out, 'tally ho! Lovely day for it!' I followed.

The rendezvous was at Princess Gardens off Exhibition Road, an area I know extremely well from my past. The outfits on display were incredible and the effort put into them was breathtaking. (Some of the vintage bicycles were pretty impressive but I was more interested in the people).

Most cycle events I have been to tend to be very male dominated. Here ladies of all ages were out in vast numbers with both elegance and élan. I took lots of photographs and will post a another blog entitled 'Ladies at the Tweed Run' 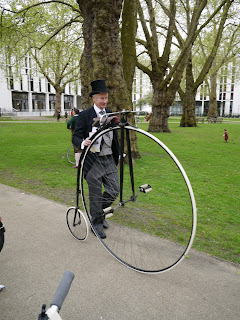 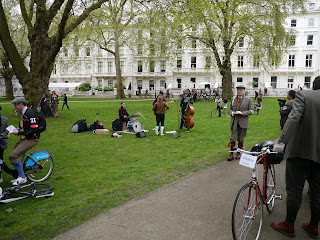 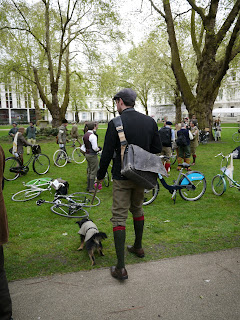 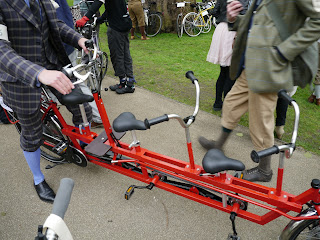 When it came close to the big off we were told to lock up our bikes and walk to the mass photo point. Two-thirds of us headed off to the opposite side of the Royal Albert Hall and were quitter happily snapping away, until a tolerant Marshall informed us that we were in the wrong place and that it was across the road on the steps near Albert Court (which incidentally is wear Howard Carter of Tutankhamen fame once lived). 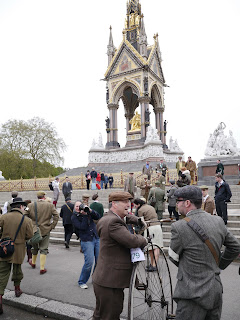 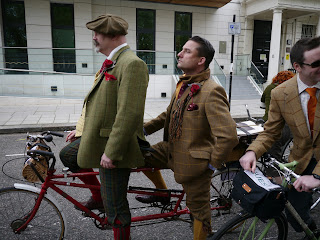 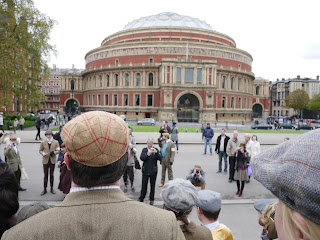 Once the photos were done to cheers, bells being dinged, honked and rung and the amusement and bemusement of tourists faces as we past by we were off. On route I spotted the legendary Brompton BumbleB being ridden by @iCrazyBee. Despite the fact he was in normal attire and was only going to take photos, I managed to get him to join the ride. It was great to see him again. 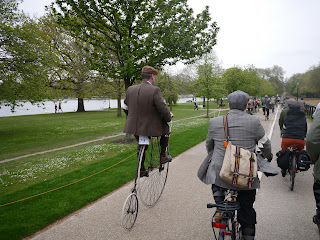 Those participating were thoroughly enjoying themselves as we past more tourists. Open top buses brought a tremendous reaction from the riders. The streets were lined with people taking photos, videos or simply staring in wonderment at the sight. I suspect most participants are controlled extroverts and like showing off. 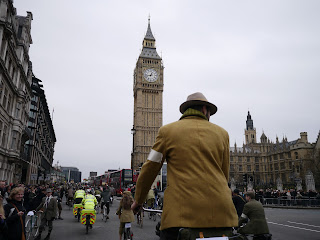 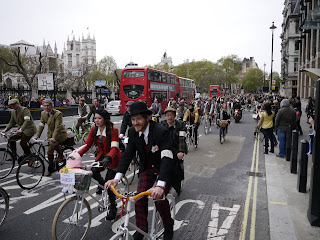 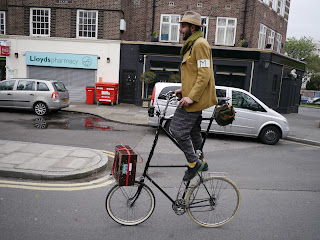 The man on the tall bike was very brave despite coming off quite badly. He also had a sound system and the music it played helped to create the mood from a bygone era. 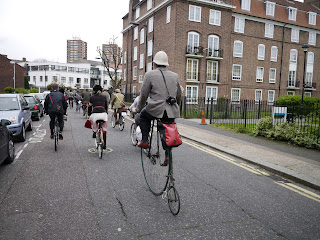 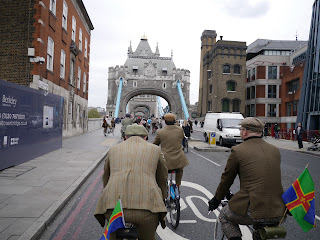 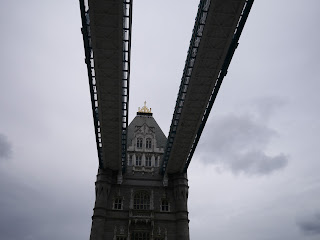 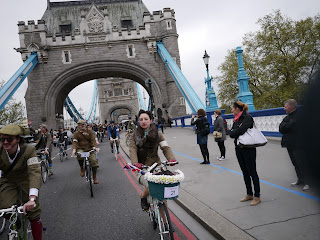 The route was a closely guarded secret and definitely on a need to know basis. For me this only added to the overall fun and larkiness of it all. 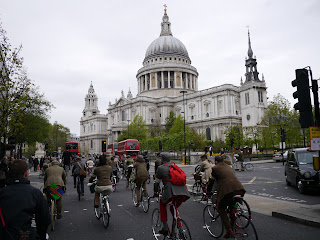 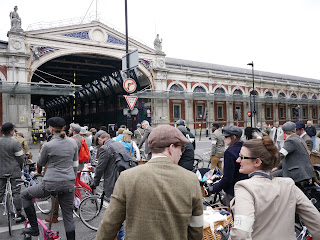 Unfortunately all good things must come to an end and our end was 'The Blacksmith & The Toffeemaker' pub. I said my goodbyes and headed back to South Kensington. 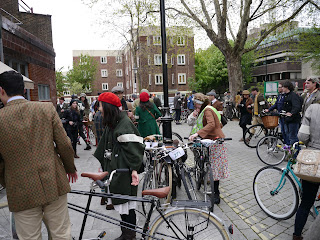 After the slow pace I turned on the speed and got back in pretty good time. The return journey was interesting. Without the safety in numbers of my peers, also wearing tweed and a questionable outfit, onlookers must have thought that I was perhaps care in the community as I straightened my MCC tie. 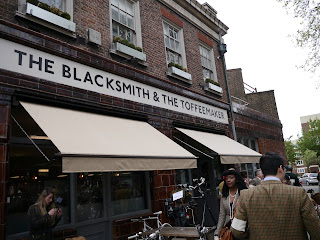 I loved the Tweed Run. There really is something empowering about cyclists riding in large numbers. The organisers did a fantastic job. Everything was very well marshalled and the refreshments excellent.  I don't think I have evert had some many Tyrrells crisps, who were out in force but they were lovely. I only hope that I am lucky enough to get a place next year as today was brilliant!