On Sunday, 31st March I embarked upon my third Audax. This one was called the Quainton Express and would involve a ride of 117km or over 72 miles in old money and a total climb of 1050 metres. Despite the fact that the clocks had gone forward an hour I still thought this would be a good idea.

The start point was near Ruislip Lido. I made my way there quite easily but Dr John - who had also agreed to go on this with me - had some trouble parking his car, as the person opening the car park he was using was a little late. 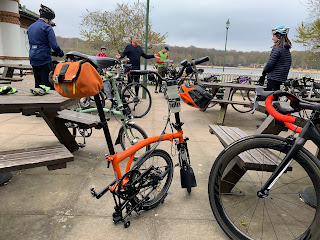 Despite this Dr John got there with about 10 minutes to spare before the official off at 08:30. With a brief set of instructions by the volunteer who organised the event we were off. 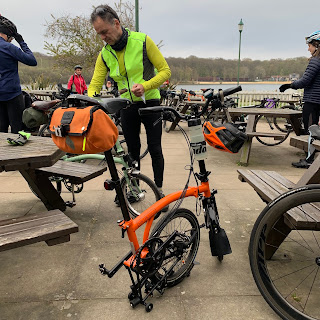 The weather was pretty good. Yes it was an overcast and somewhat grey morning but at least it was mild and there was little prospect of rain.

Early on into the ride we encountered our first hill of the day. Nothing too bad and it served to warm us up. We made a lovely descent at Harefield but soon realised  we would be ascending that same hill on the way back. 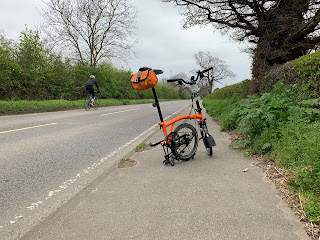 Our progress was pretty good and Dr John and I were able to maintain a comfortable pace. Soon the urban gave way rural and we were treated to some rather splendid views of the British countryside. Overhead Red Kites - very much a success story of the Chilterns - circled overhead tracking our every move. Occasionally the odd Buzzard could be seen joining them to see what these two chaps below on small-wheeled bicycles were up to.

A recent feature of rides with Dr John is his need to perform stretches frequently. On this ride I can report that the stretches were few and far between. However, when he did it was but a step away from the warm-up routines of 'The Bolshoi Ballet Academy!' 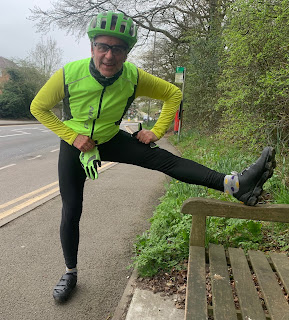 Audax rides are timed and one has to complete the ride to a strict time limit. I have to say that this almost being told what to do is not exactly my cup of tea. I like to just do my own thing. A consequence of this is that my usual fondness of taking lots of photos has to be restricted. This ride had no silly checkpoints - apart from the half way point - which meant that a little more time could be devoted to take a fleeting photo. 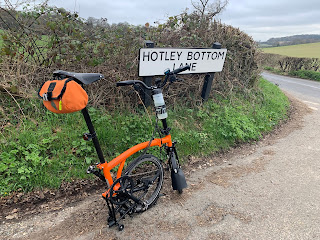 We stopped at the gates to Chequers which is the country house of British Prime Ministers since 1921. There were signs up stating no trespassing and the like but this did not stop me propping my Brompton against the wall and snapping away. 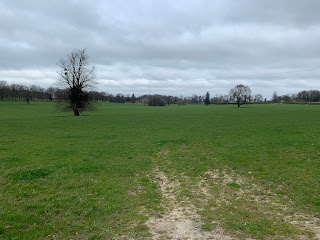 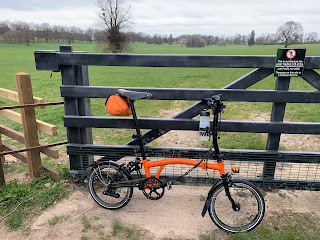 I was very grateful for Dr John's company. The route and scenery was very pleasant but doing this alone would not be something I would like to do. Whenever we needed we stopped and as we neared the halfway point thoughts turned to some refreshment. 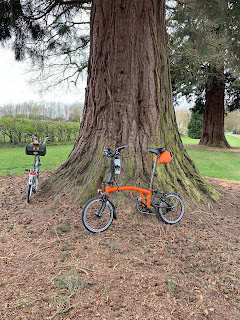 As we neared the halfway point at Quainton we started to get more than a little concerned as there didn't seem to be anything in the way of a corner shop to buy even a bottle of water.  Thankfully when we reached Quainton Memorial Hall as soon as we entered we could smell food. We got our Audax cards stamped and signed and made our way to a little hatch, from which all sorts of goodies awaited. 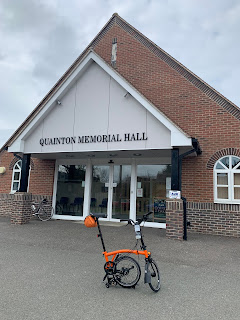 Dr John and I opted for a slice of homemade sponge cake with a wonderful peach jam filing, It was lovely! In addition to this and a cup of tea we had a slice of shortbread (again homemade) and a bacon roll. This we consumed with glee. There were only a couple of other riders there with us and when we had finished we made our way back for the return. 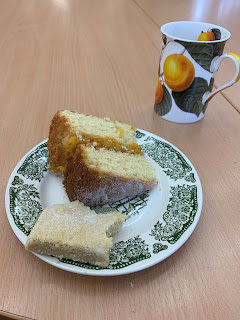 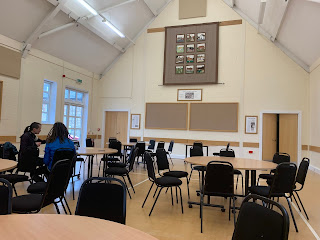 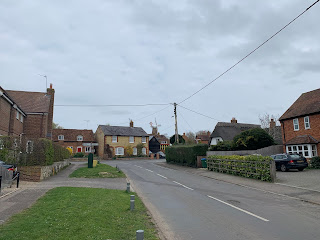 The return followed the majority of the route we had just travelled but at a certain point our route took us to pastures new. There were a few hills but they were of the short, sharp variety on the most part. 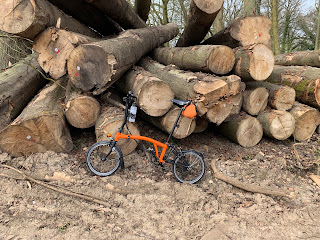 We stopped briefly in to pop in for some fluids. Both of us were running on empty and both of us in need of something to keep us going for the last few miles. 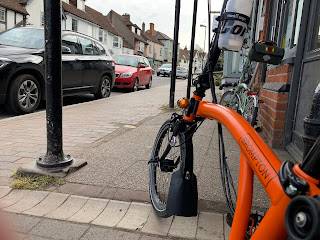 Before we reached the end of the ride the lovely descent we came down at the start of the ride was there for us to climb. We thought it would be pretty tough going but it wasn't too bad at all. With only a few miles to go we made a final push and with just over 73 miles completed, we had done it. Dr John stayed back for a drink while I made my way home.

This was another good ride that was demanding enough but very enjoyable. As always many thanks to Dr John for his company.

I hope to compete several more rides of this length and more as a way of training for the Dunwich Dynamo later in the year. I am not really sure that I need to do any training as such but it doesn't hurt. The next ride for me with be an overnight ride from London to Whitstable later this week. This is a particular favourite of mine and I do look forward to it greatly. Watch this space. 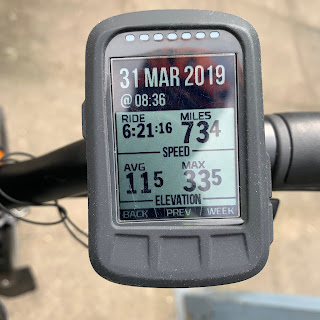