After last weeks overnight ride to Whitstable I managed to convince Dr John to join me for an overnight ride, on our Brompton bicycles, along a tried and tested route from London to Brighton. The ride would take place on Maundy Thursday, running through to Good Friday.

Our meet up point was the traditional location for many a night ride to the coast, near the Royal Festival Hall. I had travelled there part-way by tube and things looked a great deal quieter. As I cycled to the start location it was again much quieter than usual. It then dawned on me that it was Thursday and not the usual Friday.


Dr John was already there when I arrived. After a few last checks and almost at the stroke of midnight, we were off.

Last weeks Whitstable run was notable for the chilling riding conditions. The weather had been milder in the days leading up to this ride and I wore a less insulated jacket as a result.

Our progress was very good. Dr John and I have a very good riding relationship and pace ourselves pretty well. One constant was the full moon that helped to illuminate our journey.

The ride was totally unsupported. I would like to say that this meant it was like one of those totally unsupported polar expeditions, but I can't. The route meant that we headed for the outside of the Scout Hut in Horley to act as our halfway snack-point.

At one point in the ride as we had turned off after Clapham Junction, our path was blocked by a police cordon and an officer telling us to turn back. Along with the several cars, blue lights flashing, it looked serious. A local - standing in her front garden and looking to see what was going on - helpfully gave us directions to roughly where we wanted to go. Using these and the line on the Wahoo map, I attempted to simply cycle to the line and join up with the planned route. It worked. Back on track we proceeded.

The weather was strange at times. Every so often not became bitingly cold, only for it to return to normal not long after. At just over 25 miles or so we reached the Scout Hut at Horley. There we ate with some enthusiasm the snacks we had brought with us. Before setting off again we added an extra layer as we were both feeling the cold.

Turners Hill was 8ish miles away and this would provide a suitable challenge and wasn't too bad on a Brompton. Dr John who missed Whitstable last week was still recovering from a nasty cold and chest infection and probably longed for his road bike. I have completed all rides this year on my Brompton and really enjoying it. Yes I have a couple of road bikes but I am having such fun using the Brompton at the moment they are gathering dust. I suspect both will be used in the future however I find that I am happier on the Brompton.

As we closed in on 50 miles cycled Ditchling Beacon loomed ever closer. It had been ages since I tackled Ditchling Beacon on a Brompton and when I thought hard about it, that  was back in 2016! (Way too long people)! I had completed my accent using one of my road bikes. I wondered how hard I might find things and whether my foot would touch the ground? 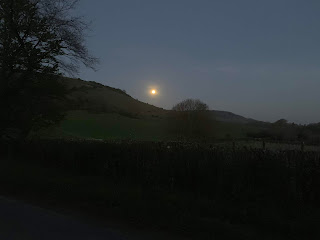 We reached the car park at the base of Ditchling Beacon at 05:30. We took some time to get ourselves ready. Snacks were consumed water was taken onboard - and also got rid of! Once ready we set off. 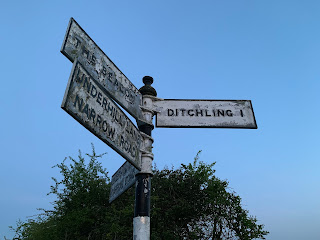 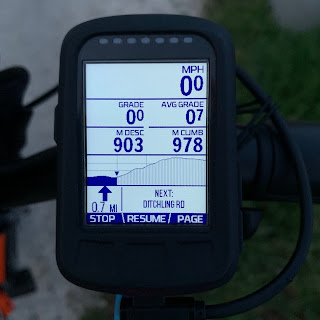 I decided to use the map profile feature on the Wahoo. This is pretty good and the little triangle points to your position on the gradient. I have little regard for segments and couldn't really care how long it took me to ascent the Beacon - as long as I could. I therefore set a steady pace and kept to it. Dr John - who was on my read wheel - I think was at this point wishing he had brought his road bike. I don't think I have ever reached the Beacon so early in the day and the views as we made our ascent with the colour of the sun creating a red and orange backdrop was glorious. In addition to the visuals, birds sang away and I tried to identify a few. With the last incline ahead we had done it. Ditchling Beacon conquered on an Orange Brompton once more. 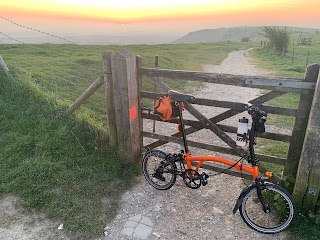 We took a few photos before heading into Brighton. As always the scenery was wonderful. As I looked at my Brompton parked in my favourite photo spot, memories of other rides came into view. 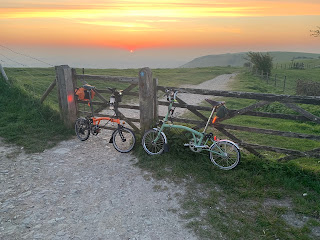 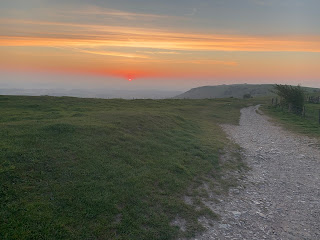 Our journey into central Brighton was almost traffic free at this time of the day. Stopping to take a photo of my Brompton in front of the famous Pavillion and Pier was the only sightseeing I wanted to do. There was a train at 06:59 and despite Dr John wanting a sit down breakfast I pressed on to the station. There we were able to get some food, board our train and almost have the carriage to ourselves. The train was bound for St. Pancras but at Farringdon Station I said my goodbyes. 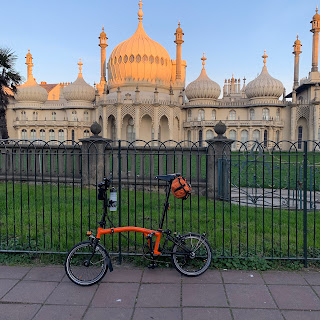 Many thanks for Dr John for coming with me - and using his Brompton! This ride felt pretty good for me on a Brompton. I am hoping that by completing rides of this nature, I am building up to have a very comfortable Dunwich Dynamo. 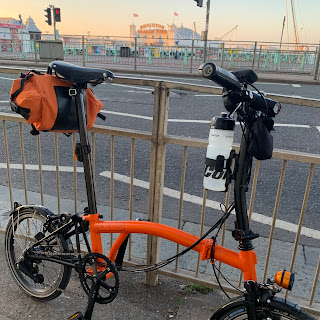 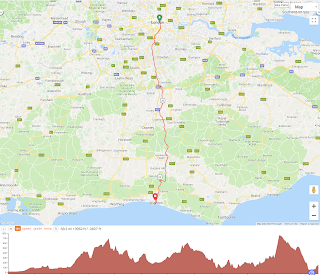