Early on Easter Sunday morning, with the sun shining, blue skies and a desire to get out on my Brompton, I decided to head out to an old haunt. Richmond Park.

My original plan (which I will have to return to) was to cycle to Box Hill and back. Leaving it too late, I opted for Richmond Park and I have to report I am very glad I did.

When I thought about it, the last time I had cycled in Richmond Park during the day was over a year and a half ago at David and Anne's wedding. I thought to myself that this was far too long a break.

As the blog title suggests I took my Orange Brompton with me. As I parked the car I could see from the many cyclists going back and forth and those loading and unloading their cars, that I was as far as I could tell, the only cyclist on small wheels. 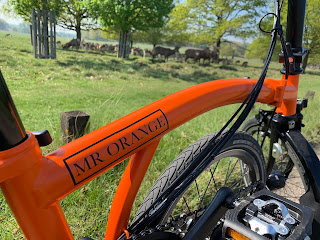 My normal route has always been clockwise - which in many ways is a little harder - but today I decided to do something different and try the traditional anti-clockwise route. Comparing the two, I preferred the anti-clockwise route and will have this as my preferred direction of travel from now on.

The sun was shining and it made for lovely cycling conditions. A gentle breeze made things even more enjoyable. Lots of cyclists were out and it was lovely to see so many enjoying the park. This also serves to allow you to check out the bicycle bling being taken around the park. There is just about every brand going and bicycles of all price brackets. There were occasionally a few cyclists on bicycles costing as much as modest second hand family car, I was able to overtake and stay ahead of. The look on their faces as I went past was a picture. Of course the same happened to me. I was travelling flat out at 23 mph and was overtaken by roadie who seemed to glide past and into the distance with what seemed like little effort.

On my second lap the path ahead was blocked by several deer who crossed the road. I managed to capture a little video footage and it took every ounce of willpower for me not to shout, 'FENTON!!' (Look it up on YouTube if you are not familiar with it). 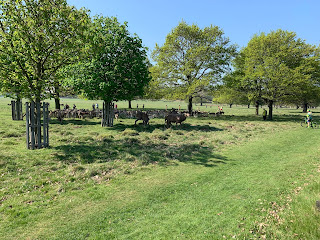 For my third lap I stopped to take some water and a small chocolate bunny. I was enjoying Richmond Park and wondered why it had taken me so long to return to there? It is easy for me to get to, provides a demanding enough ride and is fairly cycle friendly.

My three laps came up and despite wanting to do one more, time commitments meant me calling it a day. I averaged 14.8 mph for my three laps, which I was pleased with. I don't think that I could have or wanted to go any faster today. Besides it's more about the experience than STRAVA segments - which I have no interest in. 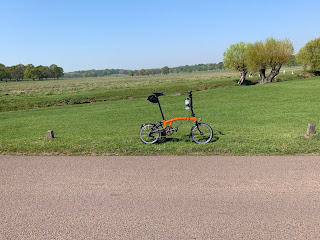 As I exited the park, I knew that I would be back on a more regular basis. I think that it would provide a good way of maintaining/improving my fitness, in scenery that is lovely. 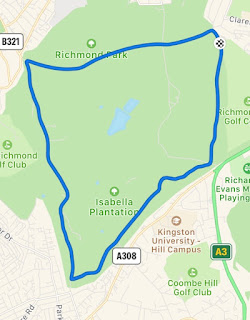