As you know nocturnal cycling adventures to the coast is something I like a great deal, with the London to Whitstable run being a particular favourite. Friday night was the start time for this ride and despite it being quite chilly I wrapped up and headed out. 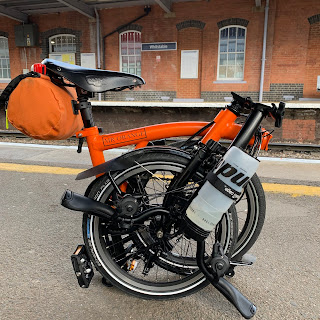 I departed from my base in SW7 far too early. To kill some time I headed into Hyde Park and and cycled to Hyde Park Corner. From there I travelled along Cycle Superhighway #3 as far as St Paul's Cathedral and then walked the bike over the Millennium footbridge. As I cycled along the south side of the river I was feeling cold - and this after cycling for a few miles. Despite this things seemed to be very busy and there were lots of people about.

I arrived at the meeting point near the Royal Festival Hall just after 23:30. Sadly Geoff and Dr John were unable to attend but Jenny (the Mile Monster) was out on on her yellow Brompton. Roger - perhaps the most stylish rider ever to grace the folding bike race at the Nocturne - was there for this first ride with this group and it was good to see him after a few years. There was also Bob and recumbent Bob. 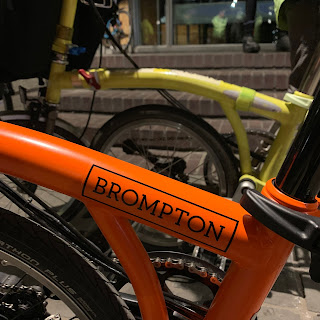 After the interactive briefing I got myself ready and deliberated about whether or not to put on the paper thin jacket I had brought in order to provide some extra warmth. I did and also put on a neck warmer for good measure.

The sound of cleats, clicking into pedals and various GPS devices bleeping into action signalled that at just after midnight, we were off. 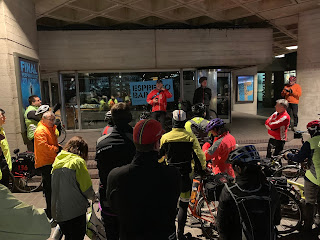 As for the Southend run a few weeks ago I decided to take my Orange Brompton with me again. I have used my Brompton on almost all rides this year so far and my Condor and Surly road bikes have been gathering a little bit of dust. I have to report that this is set to continue.

In terms of weather it was a dry but chilly night and it stayed like this for the entire time. Our ride leader Rob asked me to mark a few corners. Waiting for the tail end Charlies to give the 'all up' shout I would accelerate off back up to the front of the peloton as a way of trying to get warm. It worked on the whole. 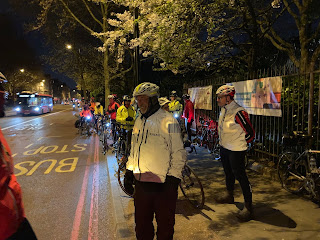 Before long we arrived at Greenwich and progress was very good. There were few mechanicals and punctures on this ride which certainly helped. 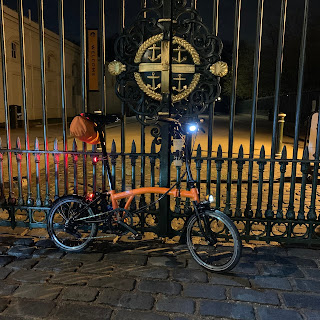 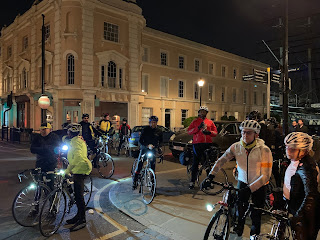 Following the Thames east we came to Woolwich and the free ferry terminus. One of the two new ferries 'Ben Wollacott' was moored and I made a mental note to cycle from London to Woolwich so that I could use the ferry to cross to the other side in the near future. 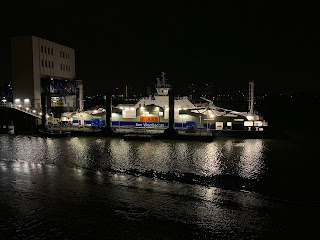 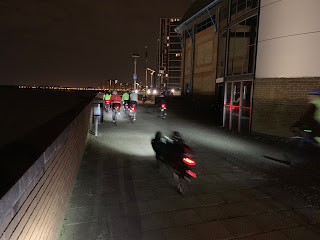 Further along we had a short rest / re-group at a a location I always get a photos of with a sculpture made out of metal. I was not alone as others decided that this was too good an opportunity to miss. 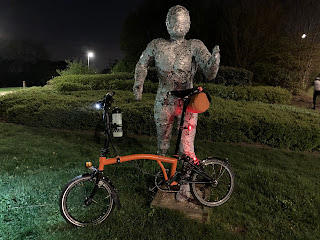 Further along in Gravesend we stopped at the traditional re-grouping point outside a pub called 'The Call Boy.' Build on the site of a former theatre the pub - if memory serves me - now remains occupied but unused. 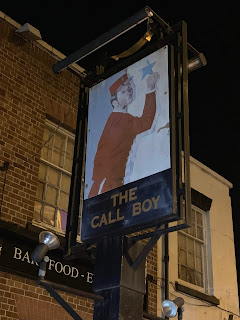 Harmer Street in which 'The Call Boy' pub stands does have some interesting buildings. Constructed in the 1830s it is part of a conversation area. The Clock Tower at the end of the street was still working and we were there to hear the bell chime for quarter past and half past the hour. 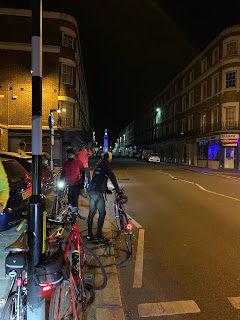 Sanctuary from the early morning chill came when we arrived at the halfway stop at The Church of the English Martyrs in Strood. Perhaps the best halfway stop we were spoilt for choice with several homemade cakes and rolls for the bargain price of £6. Veteran of these rides, occasional ride leader and Brompton owner Tim and his wife got up at stupid o'clock to receive us - in addition to arranging all of the food. 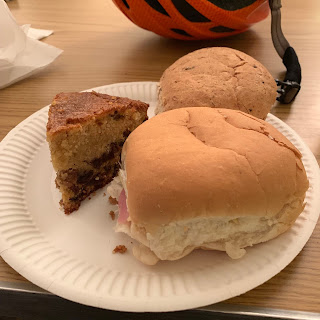 The proceeds from the £6 went towards a charity called 'Step and Learn' which does wonderful work but of course costs a great deal to run. You can read more about what they do HERE and if you could do worse than dropping them a donation if your feeling charitable.

Conversation during the halfway stop - for me at least - was non-existent as I battled trying to keep my eyes open. At one point I actually think I nodded off, being awoken almost instantly by that falling sensation. After that I was wide awake. 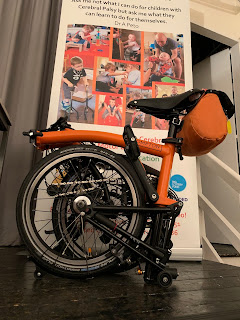 Saying our goodbyes and thanks to Tim and his wife we headed out into the early morning with dawn approaching. More often than not after the halfway stop and being inside in the warmth you can feel the cold. This was certainly the case with me. I put on my light rain jacket and instead of my neck warmer I opted for my almost SAS balaclava! Even with this on I still felt the cold and made it my business to pedal hard as soon as I was able. 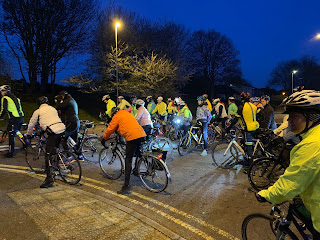 Passing through Chatham, Gillingham and Rainham we made very good progress. Birds started singing and cycling through the emerging dawn is one of the aspects of these rides that makes it all worthwhile.

Occasionally for a few stretches I cycled alone with riders behind or in front of me. These I also enjoyed with my mind mulling over all sorts. 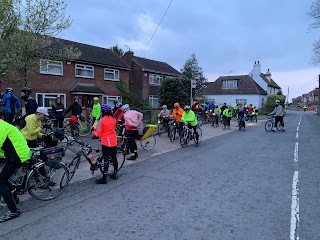 For this ride I decided to try and keep at the front half of the peloton which worked well. Occasionally I would come across a view that was worthy of a photo - invariably with my Brompton stuck in from of it - so I would stop, take my photo and try and get back to the front. 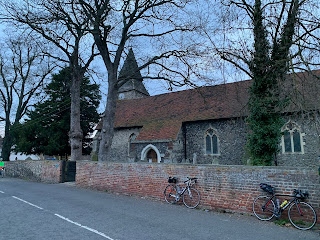 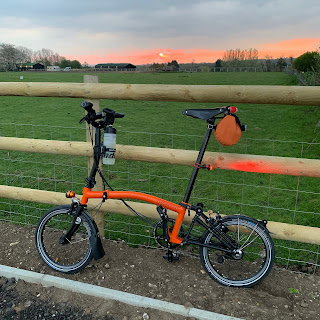 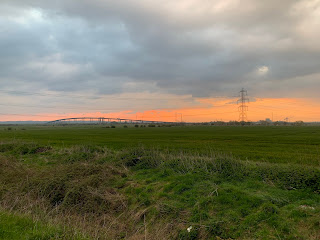 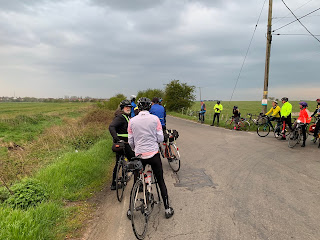 Arriving at Faversham we regrouped and were again told about the last turn at Graveney. From this point you could - if you wished and knew the route - could go ahead of the ride leader at your own pace. This is always something I enjoy doing. 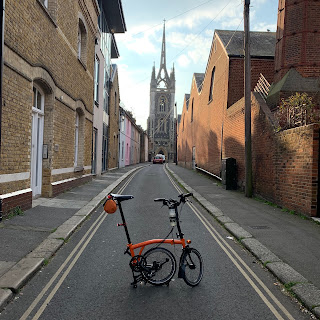 When the turn came I pedalled as hard as I could and maintained a pretty good speed almost all of the way. There was very occasionally a strong headwind however in the past I recall battling strong headwinds all the way to Whitstable.

I arrived at Whitstable just before 08:30 and rather than stay for breakfast, wanted to get on the next train for London. I therefore headed straight for the station. When I got there  with 66.46 miles showing on my Wahoo, I could see that a few other riders must have had the same thoughts as we stood at various points along the platform. 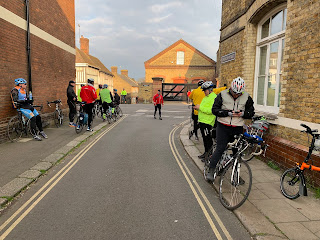 The 08:59 train pulled into the station and putting my Brompton in a nearby luggage rack I retired to a nearby seat. The journey would take and hour and twenty minutes and my carriage was busy to say the least. I am so glad I had my Brompton! I really don't know what I would have done if I had of taken big wheels?

When I got to St Pancras the joy of the Brompton and its portability again came into play as I boarded the tube for home. There is just no way I could have done this as easily or street-free with big wheels. Arriving home at about 10:45 I was rather pleased with myself for making such good time.

When I got home I had a quick shower and an email informed me that a package that was scheduled to be delivered on Monday was going to be delivered before the end of the day. With Mrs Orange and the Orangettes out until later on, I waited for it to arrive, trying not to go to sleep. 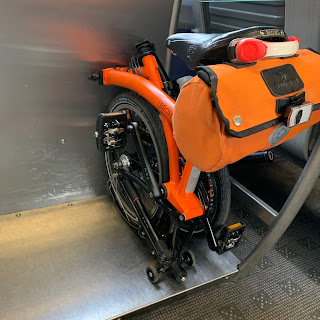 This was another great adventure. I always enjoy the Whitstable run and this - despite the chill - was a good one. Many thanks to Rib for leading the ride, Greg and Stuart fro acting as Tail End Charlies and Tim and his wife for the lovely refreshments at the halfway stop.

The next nocturnal adventure is in a few weeks time and will involve bridges, visiting another country, an interesting halfway stop, epic train journeys and ponies. Watch this space for that one!