Today was the final day of the cycling fest that is Prudential Ride London. Having not got a place in the Brompton World Championships or Ride100 ballot, I did manage to gain a place on the Ride100's little sibling the Ride46. I still have absolutely no recollection of applying for this, but having paid the sign up fee I was in.

I got up at an ungodly hour as I needed to be at my waiting point between just before 08:00 and 08:30. With all the road closures I had worried beforehand about how I would get to the Olympic Park in east London. Thankfully, two things helped me. There were hundreds of fellow participants to follow and the organisers had helpfully put up large signs pointing you to the start. Brilliant.

I arrived in very good time and had over an hour to wait before my wave would start. The time went pretty quickly as the atmosphere was great. I chatted to fellow participants and we talked about all sorts from bikes, food, what we did for a living to what the medal would be like. 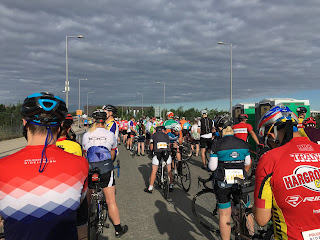 I had genuinely considered taking my S-type titanium Brompton for this event but thought better of it. My Condor Fratello it was and I know that I am biased, but gazing around and seeing a sea of fairly dull carbon, I was happy to bring something a little different to proceedings that for me won on the élan front/ 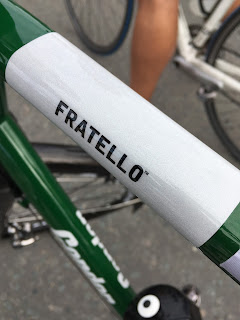 Soon our wave was moved forward and this kept happening the closer it got to the magic 09:06 start. Other waves were sent off to the blasting of various music tracks that won the vote by show of hands by the wave waiting to got next. 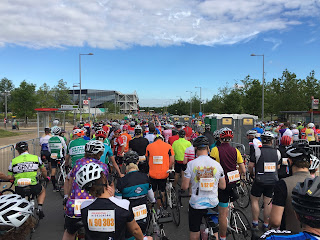 There were a few people in my wave who looked incredibly nervous, having not done anything like this before. I found myself providing them with lots of encouragement and positive vibes which seemed to do the trick. With incredible precision at 09:06 to the very second we were off. 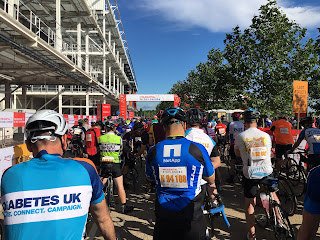 The first few miles were quite hectic. I found that on flat roads and no cars my speed increased greatly. I had joked earlier that it was not a race. I had no intention of racing but I did have to curb my enthusiasm at times.

With no cars it took a little getting used to ignoring traffic lights and cycling through red lights. The fact no cars were allowed on the roads we were cycling on was wonderful! This did not stop many participants from occupying all parts of the road, regardless of how slow they were.

It wasn't too long before I caught up some Ride46 riders who went off before me and some on the Ride100. My legs - and the rest of me - felt pretty fresh and I tried to keep my average speed at a consistent 19mph. I don't know why I picked this but it seemed to work for me.

I have already mentioned about the sea of carbon and I was indeed surrounded by it but a few participants commented on how they liked my bike. One fellow rider on a stunning Mercian Cycles bike, in a colour I can only describe as Ferrari red, shouted out 'steel is real!' before accelerating into the distance. I had these words now firmly implanted in my mind, liked them and occasionally repeated them to myself.

The miles seemed to fly by and before I knew it we had arrived at an old haunt, Richmond Park. There was lots of support along the route from charity staff, to relatives of participants to people who simply liked the spectacle of seeing lots of people travelling pretty fast on bicycles.

The hill proved little trouble and I managed to make my ascent pretty quickly. The gearing on my bike is rapid and there always seems to be a cog or two in reserve. I was even out of my saddle for a little bit - mainly to get the blood flowing.

One thing that for me was quite dramatic was my clothing choice. I decided to use a Rapha Brevet jersey that has a windbreaker panel on the front. This worked brilliantly at helping the chill away but the merino content kept me cool when things got hot. (Isn't merino just amazing stuff).

The dramatic thing as far as clothing is concerned, as the above is not that dramatic, was that I wore a pair of Rapha bib shorts. Nothing dramatic there I hear you say. No, the dramatic bit was we wearing just the bib shorts and not putting a pair of shorts over them! I felt like a proper cyclist, despite possibly having the baboon bottom I have always shunned! I have to report that there are bib shorts and then there are Rapha bib shorts. They are excellent.

At Kingston - I think - the ride slowed to a compete halt. We walked our bikes around for a while and then when we did go off we went round slowly. Just after we set off I saw a poor lady lying face down on the floor, not looking too good. Other riders had stopped to help but it looked as if it had just happened as there were no medical crews attending to her. It was quite sickening and I just hope it looked worse than it was and she was okay.

I had not actually stopped at all at any of the feed/water stations and with only half a bottle of water left I decided to stop at just before the Ride100 and Ride46 split. Once I set off I was sure that I saw the ever smiling Brompton owner Annie Panda. It was lovely to see her, said hello and wished her well.

With about 12 miles to go some of the riders who had begun the Ride100 earlier that morning merged and joined those on the Ride46. I have to say that this was perhaps the least enjoyable part of the ride. Some of these riders, with speed and fitness far exceeding my own seemed to treat the last few miles as a race. There was some very close passes from the left and right with no warning and some cutting up on corners. I let them pass and proceed behind various pelotons.

With central London in sight I knew that the 46 miles would be coming up quite quickly. With cheers and roars from the many people lining the route I headed into the home straight that is The Mall. I have to say that the people cheering and cheering were brilliant. They might have had one particular person they were cheering on but they universally encouraged everyone.

I crossed the finish line at 11:34 and pressed the stop button on my Garmin. I had done it. The first Ride46 had been conquered. 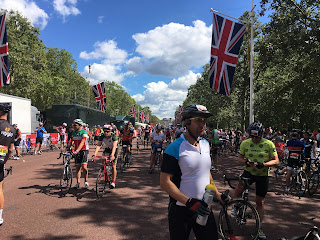 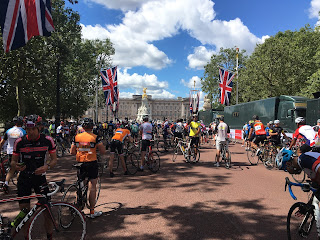 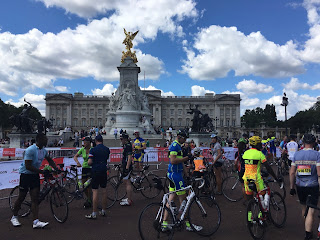 Walling my bike along I was handed my medal and later a goodie bag with drinks and food. I rang Mrs Orange to tell her of my triumph and how much I liked Condor road bike and was greeted by laughter. 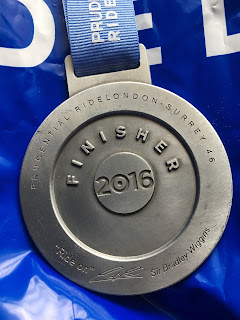 This was a lovely event and well organised. The Ride100 participants really do have a very demanding route but I really liked the simplicity of the Ride46. Could I have done the Ride100 today? Maybe. I feel pretty good and the legs certainly feel that they have more miles in them but I do think I would have to put in a great many more miles before I would have answered, yes.

The ballot for the Ride100 2017 opens in a few days time. I would like to have a go at it and would have a year to train but I'd be very happy to get into the Ride46 again - assuming they offer this, which I hope they do.

There are lots of fellow Bromptonians doing the Ride100 today in addition to Annie Panda - David, Anne, Zoom Zoom, Graham, Chris, Dina but a couple Jenny and Simon on their Brompton bikes! Also on the Ride46 was Daniel. I hope that everyone enjoyed themselves and the route and you never know, I might rock up on my Brompton if I ever do this again! 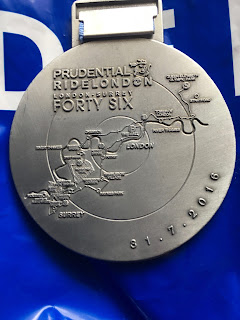 Many thanks to the rider organisers and volunteers and for all the people to cheered us along the route.