All of Friday I was looking forward to another night ride to the coast. The weather had been forecast - as is usual in the UK - to rain and as such I got my Brompton and my Condor road bike ready so I could hedge my bets as it were. As far as I was concerned when I stuck my head out of the front door late that evening, it was going to be dry, so Condor big wheeled bike it was.

Again I decided to head into London via the overground train and then cycle the rest of the way in. My journey to the station confirmed that it would indeed be a really lovely night as far as the weather was concerned.

The journey was uneventful but glancing up the carriage I could see a rather strange sight. A gentleman was sitting quite nonchalant, reading a newspaper but with both his feet in a plastic carrier bag? I can tell you that when I saw him giving his ankle an itch, he had no shoes or socks on? I speculated as to what happened to him but my thoughts turned to what he would do when he reached his station? Would he hop? Would he simply take the bag off and walk, bare footed? Sadly I did not find out as I got off before he did.


I arrived at Hyde Park Corner in good time and Dr John was already there - on his Brompton - along with the always jocular, Greg. Zoom Zoom arrived not long after on his road bike.


Soon, participants started to assemble. This would be a slightly lower turnout but it did nothing to dampen the enthusiasm and buzz for all things night riding. Five of the group would be travelling on to Paris via the Newhaven Ferry. The rest of us would be finishing at Newhaven to return back to London once we had reached our destination. 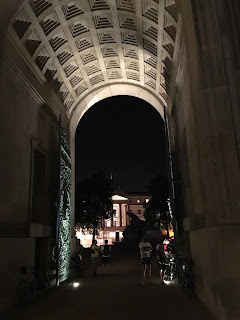 Mark (King of the Hill) on his way home from work stopped off to say hello. When I saw him I half hoped he was going to join us but alas he could not make this one.

Our ride leader was Olaf, a cyclist with a passion for long distances, with the Paris-Brest-Paris under his belt. After the obligatory safety talk and as close to midnight as humanly possible, we were off.

It was a warm night and was to remain so for the entire adventure. Again I have to report to liking my new road bike a great deal. I have not totally neglected my Brompton bikes and used them a few times when I have gone on errands into central London. 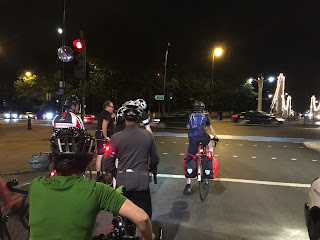 The ride seemed to go at quite a good pace. There were only a few mechanicals and punctures and the lower numbers taking part might have also helped with this.


With the moon partly illuminating our way we made very good progress and the miles just seemed to fly by. That extra light added to the various front lights on bicycles, allowed us to see all sorts on the road ahead. There were snails and slugs - soon to be squashed, voles that darted across the road with unseen legs and adding to the squashed theme a rat, fox and something unknown! 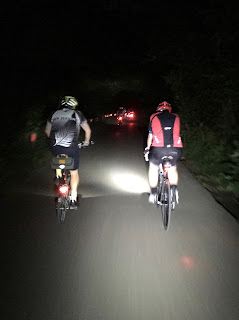 Our halfway stop was at the 24-hour McDonald's near Gatwick airport. This for me was a comedown from the cheese sandwiches at, 'The Cabin' in Faygate but welcome nonetheless. 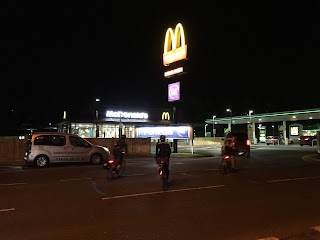 When we got ready to go dawn was fast approaching and there was a slight chill in the air. I had not brought any additional layers apart from a light rain jacket but as I was too lazy to get it out from the depths of my saddle bag, I took the view that pedalling hard would warm me up in no time. (This worked)! 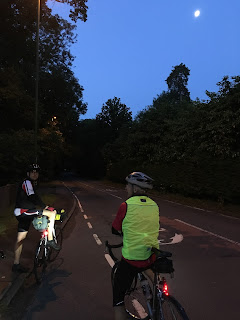 As always on these rides there were a few miles of cycling alone, with only your thoughts for company. Downhills and flats all helped to increase speeds and as a result the miles were eaten up in no time.

We regrouped at a familiar spot, where on Brighton rides the dreaded Beacon wouldn't be too far away. On this ride we would not be going that way sadly. I write sadly as I relished the chance of seeing how I would fair ascending Ditchling Beacon on big wheels. 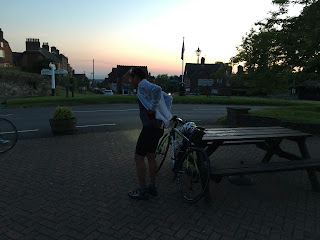 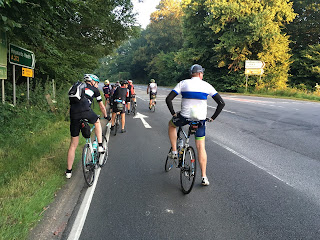 As we cycled along the sun was out but so were pockets of freezing fog/mist. Going into these was like natures air-conditioning and I welcomed it immensely. 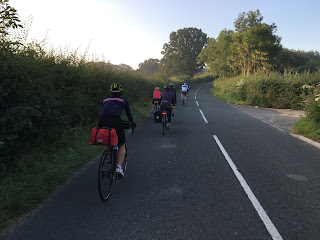 It really was quite strange as the countryside looked as if a ghostly blanket had been draped over it. Then moments later you passed it by and it was gone. 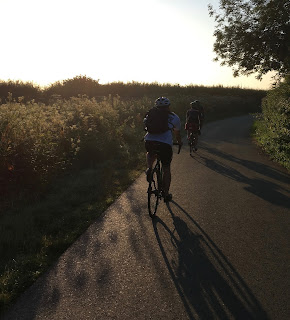 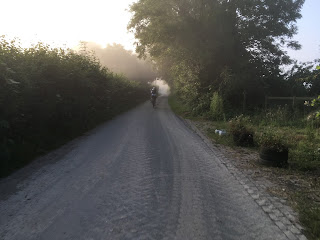 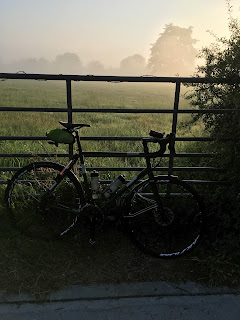 With a final push and 60 miles coming up we knew that Newhaven was not too far away. At just over 63 miles and waiting on a bridge over the River Ouse for the others to arrive, we had done it.

I said my goodbyes as I had to try and get back home as soon as I could - to get some sleep and the go to a family event later on Saturday afternoon. Zoom Zoom came with me while Dr John stayed for breakfast and was on a later train.

This was another great ride and I thoroughly enjoyed it. I felt pretty fresh for the rest of the day and as I type this - Sunday evening - I still feel fresh, considering I did another 52 miles on Sunday!

Many thanks to Olaf, the tail end Charlie team and to Dr John and Zoom Zoom for their company.