The Bikeathon is an annual event that raises awareness and funds for the Bloodwise charity. Bloodwise has been working on ways to combat blood caner since the 1960's and believe me they are doing an excellent job in this onerous task. The Bikeathon is a 52 mile route through parts of London, along the Thames and out to Richmond Park and then back into London for the finish.

Despite having cycled almost 63 miles overnight on Friday/Saturday, I - and my legs - felt pretty fresh and I was more than happy with the prospect of another 52 miles. Setting out early I made my way to Southwark Park for the 08:00 start.


Things were buzzing when I arrived and many participants were eager to get going. There were all manner of bicycles, riders and many who were riding to raise money for loved ones lost or celebrating the fact they they were in remission.


The first wave were set off and I awaited my turn. I knew that there were a few friends taking part in this ride but we weren't riding together. Soon our turn came to roll up to the start line and with a photographer furiously taking shots of anything that interested him, we were off too.

Progress of painfully slow for the first few miles but it wasn't a race so didn't matter. Sadly this did not deter a few participants who I suspect regarded it as a time trial and were as selfish as they were dangerous riding far too close to inexperienced cyclists who were not taking part to be the fastest.

Manoeuvring around inexperienced cyclists - many of whom had brand new bicycles - could be likened to the Millennium Falcon negoiating the asteroid field in 'The Empire Strikes Back.' I'm sure you know what I mean if you have seen it.


The route was very well marked and even though gpx files were posted for participants to download to their navigational devices, you really didn't need to. I however was trying out the new Garmin 820 which the lovely people at Garmin have made available to me. I have to report it was a bit of a revelation. I like the fact that is has all the features - and a few more - of the 1000 but in a smaller body and is fast but one feature in particular stood out. When connected to your phone it provides audible turn by turn directions! I will post a blog about this wonderful device at some point but I managed to get my way around the route deliberating not paying any attention to the route markers!

In the distance I saw a familiar Brompton that could only belong to Jenny. Jenny has the moniker 'Mile Monster' and on her Brompton she has little fear of taking part in some seriously long distance rides. It was lovely to see her and we rode together for a short while before I headed off.

There was mean to be a water / snack stop before Richmond Park but I missed it. Soon I was heading into very familiar territory and seeing Richmond Park - a location I have not been to that often in the past couple of years - was a very welcome sight.


As usual the park roads were dominated by cyclists. As I cycled along I saw that a few participants had laminated photos of loved ones. The dates of birth and death told everyone all they needed to know. One of the good things about a ride like this is chatting to others taking part. The motivation for some to take part in this event was quite moving and it was awful to hear about some wonderful people, whose lives were tragically and unfairly cut short. 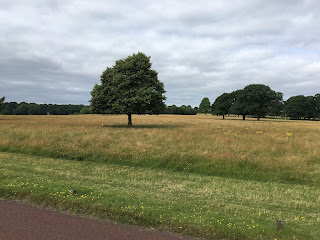 As I had missed the water stop I decided to have my own impromptu rest before the hill we would have to ascend. The weather was lovely and for a few moments I watched as cyclists zoomed past.


Not long after I had set off the road ahead was blocked by several stags crossing the road. Quite rightly they cared not a jot about anyone else and sauntered along at their own pace. 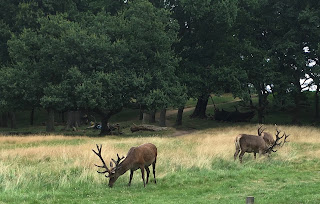 Heading back in towards central London I soon found that I was travelling along very familiar territory, especially when heading out towards Canary Wharf. Near Popular I stopped at a newsagents to top up my water and buy a bar of chocolate.

A cyclist outside - not part of the Bikeathon - was tending to a puncture. Asking him if he needed any help he said that his inner tube had a hole in it and he had not spares or kit to repair it. Diving into my toolkit I produced a small stick on patch. I applied it to the small tear and he was good to go after pumping the tyre up. He was so grateful that he wanted to buy me some more snacks from the newsagent. I just told him to pass it on and do something for someone else.

As I was just about finishing my 'Starbar' - I love these when cycling - I saw Jenny going past shouting out my name. I was to later catcher her up and I saw the ever stylish Zoom Zoom passing the other way.

The final water stop was on my favourite Thames route to Greenwich but now not needing it I peddled on. The end came at about 48 or so miles rather than the billed 52. To a few cheers and smiles I was handed a medal - which was a beauty by the way - and my Bikeathon was complete.


The Bikeathon is a lovely event and always well organised. The route is not the most demanding but it is fun. Perhaps the most important aspect is the fact that funds are raised and awareness of Bloodwise is increased. I have attached a link to their website under my usual map and ride data so you can see what they are all about and  what they get up to.