Kew Gardens to Box Hill and back

Firstly, welcome to my new blog. This is an addition to rather than a replacement.

Today was a day I had been looking forward to all week. I have been to Box Hill many times in the past but things were going to be very different today as I would be using my new road bike for the first time on a fairly long ride.

The meeting point was the tried and tested, outside Kew Gardens. I decided to drive there but I was half tempted to cycle there as it was a lovely morning and the weather Gods were predicting that this description would remain for the entire ride.

When I arrived some usual suspects were there but on rather different bicycles to that I have become accustomed to seeing. David our ride leader, Anne, Zoom Zoom, Chris, Sam and David's uber-fit sons were all on road bikes and only Dr John -surely to be tempted our way - was on his Brompton.

We set off just after 10:00 and almost instantly I was again struck at the differences between my Brompton and my new road bike. My road bike is a steel framed affair and build for comfort over longer distances. It was certainly that! At about 10kg it is not a lightweight carbon number but along with the bike fit that came as part of the purchase, it is supremely comfortable and fits like a glove. I was struck at how I could maintain much higher speeds - even into a strong headwind - for the same or less effort. In short I loved it.

Not too long into the ride we left the urban behind and the countryside in all its glory was in front of us. When we stopped it was hot and humid and we were thankful when we moved off again. 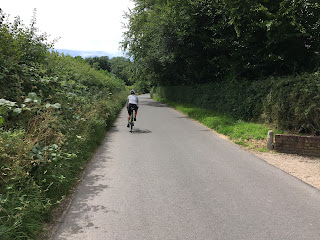 When we reached Headley we knew that the local shop was not far away. This would provide some much needed refreshment and the replenishment of the all important fluids. 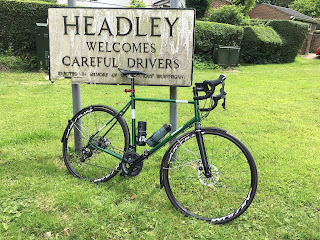 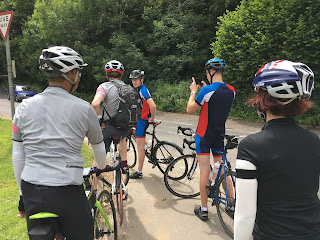 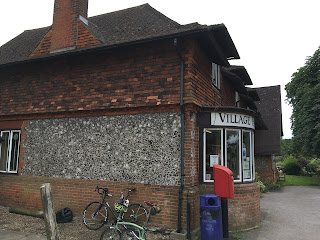 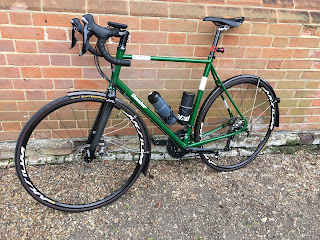 The village shop was a quaint little number selling I suppose tuck shop items of sweats, ice creams and cans of pop. 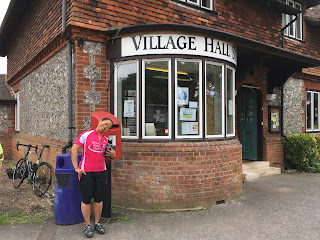 With our water replenished and a few choice items purchased and consumed we made our way to the famous Box Hill. Box Hill is a high point on the North Downs at about 224 metres. Apart from being part of an area of outstanding natural beauty it is famed for being part of the 2012 Olympic cycling event, a regular for the Prudential Ride 100 and also a mention in Jane Austen's 'Emma.'

I have been up Box Hill quite a few times and always on a Brompton. I have to report on a road bike things were very different. I found that I was able to make my ascent much quicker and felt less strain being put on joints.

At the top we were part of many cycling groups and individuals who had also made their ascent. After a coffee, some food and chewing the fat for a while, it was time to depart and our journey home began. 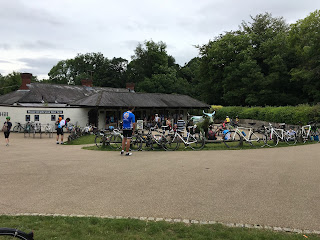 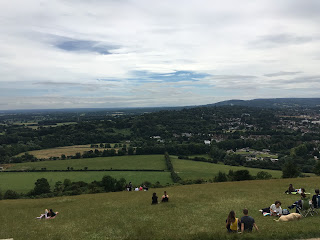 If you have read my other blog and entries about Box Hill, you will know that it has not been without incident! Today was no different. After a lovely straight section of road I heard what I thought was a leave getting stuck in my spokes. When we stopped to regroup not too long after I discovered that I had suffered a rear wheel puncture!

Having tried to practice a little beforehand, I had the wheel off quite quickly and was assisted by Dr John and Zoom Zoom. There was much double entendre and larking about at my feeble attempts. Thankfully David stepped in save the day and like one of Jane Austen's lady characters, I let him! Not long after it was wheels rolling and I was back in business. 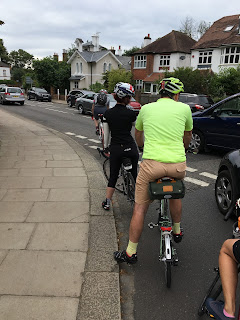 We made really good time and passing through Richmond we soon made our way round to Kew, where it all began a few hours before. 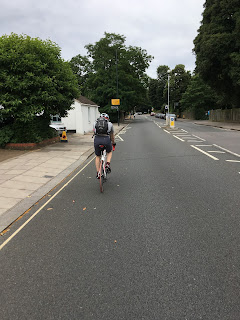 This was a brilliant ride and I loved it. I was rather pleased that my new big bike lived up and exceeded my expectations. I was also to be very happy to be behind the rather rapid wheels of David. This felt like old times, which sadly have been all too few and far between this year.  It was lovely to see everyone again, especially in a very different capacity! I am sure that this will continue.