Regular readers will know that I love night rides to the coast, with London to Whitstable one of my favourites. Friday was an opportunity to take my Orange Brompton on the King of rides and certainly one too good to miss!

Even though I had signed up for this ride many weeks ago, it came upon me rather rapidly. Work has been manic for the past couple of weeks and I didn't have time to carry out any preparation until I got home Friday night. Luckily, being fairly organised as far as my bike and what I carry I don't have to do too much.

I decided to abandon the car for this ride and relied upon the tube to get me to Hyde Park Corner. Boarding a train after 22:45 heading into central London is not something I am particularly fond of. Initially I more or less had the carriage to myself. I watched in amazement as a young lady started to squirt lines of foundation on her face and then a second set of lines in a slightly different colour. Using the windows opposite as a mirror she skilfully blended this all in. Moments later as we approached the next station, my worst fears about using the tube at night were realised..

At least 30 - 40 youths boarded the tube carriages and then started going through the carriages, opening interconnecting doors while the tube was in motion. It seems that they had been involved in some sort of altercation. My Brompton was parked in front of one of these doors and I had to move it each time they went back and forth. At one point two friends had a conversation through the carriages, perched on the windows. They were speaking English but I barely recognised anything of what they were saying other than a few words. The true horror of this situation was when I glanced down and saw that the chap in my carriage was wearing white socks with a pair of Oxford shoes and an estate agent type suit. It was almost too much to take it.

When Hyde Park Corner arrived I was elated and so was out into the fresh air. Making my way to Wellington Arch I could see that a few other participants were ready and waiting. 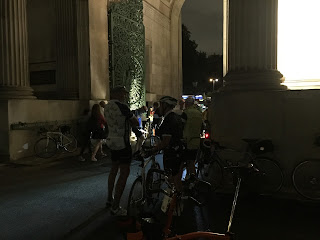 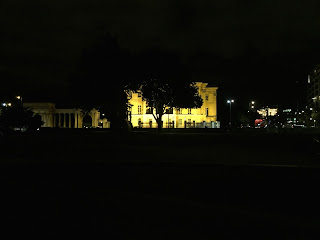 One by one others started to arrive on all amend of bicycle. Road, mountain, hybrid, recumbent and folding were all represented. As I took some photos Geoff arrived and we made up the only Brompton contingent.

As is customary, Tim our ride leader went through a few safety procedures that was in its usual interactive style. Just before midnight we made our way to the large junction before heading out into the warm summer night, bound for Whitstable.

As far was the weather was concerned it was near perfect conditions. Warm but not stiflingly so. A breeze, but not too strong. Most people wore short sleeves despite packing an extra layer, I didn't need it.

Getting through London was slow initially as there were lots of roadworks. Every so often we would stop and regroup, for people who had got caught up at red lights. 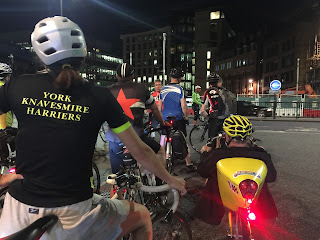 When we reached The Monument the worst of the traffic was over. The Monument, was built between 1671 and 1677 to commemorate the Great Fire of London in 1666. You can actually go up inside the spiral staircase and I always make a mental note to do just that one day!


Cycling every further east we arrived at Greenwich sooner than I had anticipated and again regrouped for the tail to catch up.

I had thought of taking my Titanium Orange Brompton with me on this ride as it has not had an outing since I competed at the Nocturne a few weeks ago. As it was a night ride and my beloved P type has an excellent SON dynamo hub and light, I had to take it. (It's my favourite by a mile anyway).


Passing Woolwich we overlooked the Thames and memories of many rides with my Bromptonian friends started to play in my head. 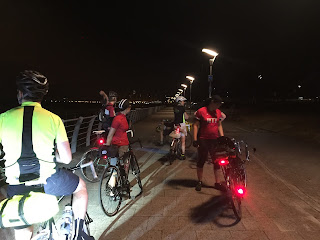 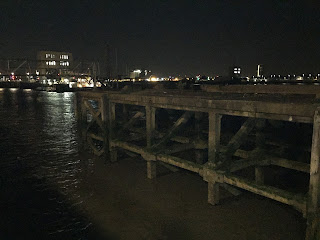 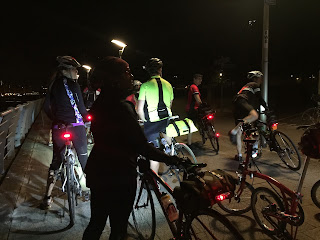 Geoff and I stayed together and were just about able to keep up with those at the front of the pack. (Of course many of them could have gone considerably faster if this had not have been a group of this type). Bob, usually on his Brompton was on his road bike and was trying his best to convert us to the joys of ownership. It was as if he had some sort of epiphany with regards all things road bikes. (While I do appreciate them, they are just not for me. I love the fact my Brompton can be folded, taken on all kinds of public transport and is just more convenient).

One of the great things about these rides is that you get to meet lots of interesting people. One lady -  a seriously quick rider - on what looked like a retro road bike enquired whether I normally do these rides on a Brompton. I replied that I own two bikes and both were Bromptons.

At just over 30 miles we arrived at The Catholic Church of the English Martyrs, a familiar haunt and one with wonderful refreshments . The cakes were home made and top drawer stuff. Sadly I only had brought enough money for a cheese roll, slice of lemon cake and a cup of coffee, otherwise I could have happily bought the rest of the cake to take home for later.

After recharging the batteries we headed back outside. To my amazement I didn't feel too cold - after stops I am usually freezing. Despite this, I put on a thin layer just in case I did feel cold but after less than two miles I was off again as I was becoming too hot. 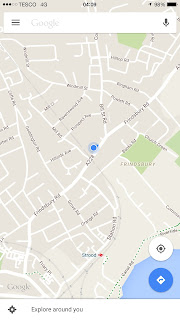 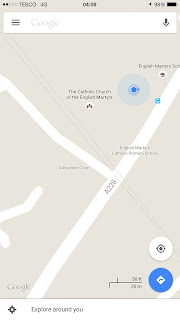 As we made our way after the rest stop dawn was approaching and as light illuminated what had been in darkness we started to get glimpses of some of the most stunning views possible. 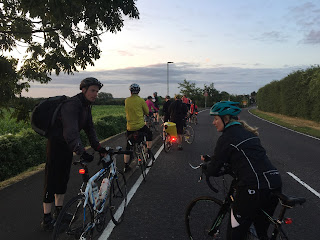 Some of the views were too good to not photograph and many riders stopped to take arty shots of the sun rising through trees. 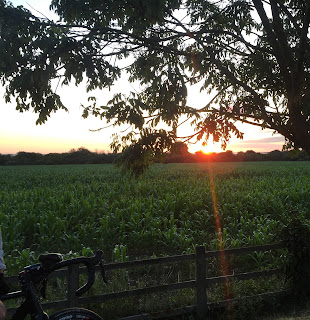 With dawn arriving ever quicker we went thought quaint little villages, all still asleep and oblivious to our goings on. 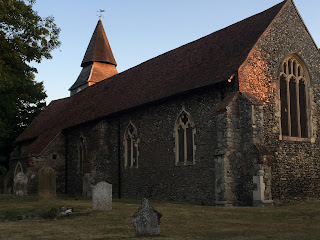 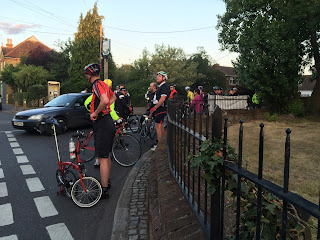 View after view competed with one another and just when you thought it could not be bettered, something came into sight to surpass all that had come before. 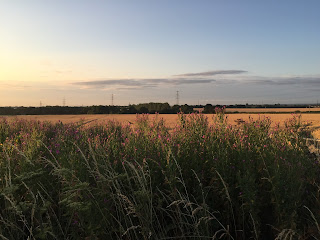 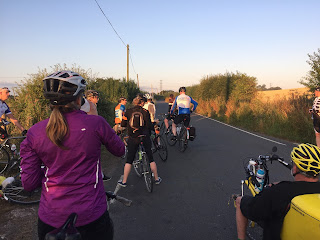 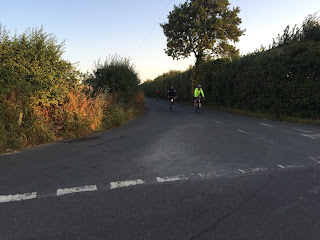 The ride was more or less event free and I think there were only a couple of punctures among about 40+ riders so pretty good going. 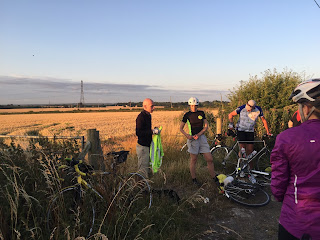 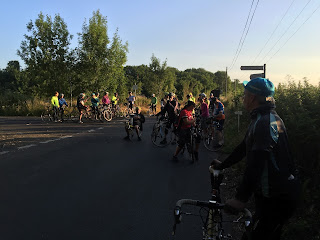 At a little town centre where market stalls were being set up for later in the day, Tim announced that from this point on there might be some riders who would go quite fast to the finish line at Whitstable. A few riders started off and I went with them... 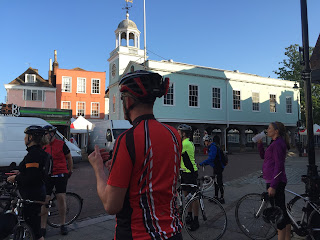 I managed to keep them in sight for a couple of miles but their speed was impressive and I couldn't stay with them. I knew this of course but it was fun trying. Maintaining my pace I kept going and after another couple of miles I realised that I was riding alone. Being the worlds worst navigator I started to ease off and cycle at slightly slower pace. Thankfully other riders started to join and pass me, one of them being Geoff.

As we were making wonderful timing I decided that I would head straight for Whitstable Railway Station and forgo breakfast. Geoff, a very quick Bromptonian said that he would hopefully meet me at the station and headed off into the distance.

With signs for Whitstable and the station I knew that the ride was all but over and I eventually reached the station just after 07:30 - yes I had made a few wring turns on the way. Having a look at train times, there was a train for St Pancras at 07:50. Soon I was joined by Geoff and with tickets purchased we boarded this train along with a few other participants from the ride.

The train was one of those fast types and at a certain point it was able to reach speeds of about 140mph. I set my Garmin to record this and took a photo of when it reached 138mph. Geoff got off at Stratford and we said our goodbyes. As always it was a pleasure riding with Geoff and I hope that we will be able to do so again soon. Also many thanks to Tim for being the ride leader and organising this ride in the first place. 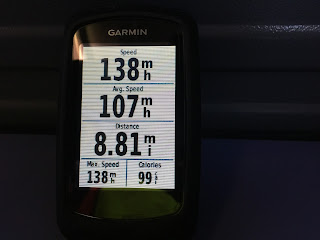 As I eventually boarded the tube for home I wondered whether those on the same carriage interested in my Brompton folding bicycle would believe that I had just cycled from London to Whitstable? This was a great ride and I loved it. I was very happy with my average speed and even happier that my SDP shoes held up - after having to tighten the straps periodically throughout the ride!

I am not sure what rides I will have next but the rather special Brompton World Championships - special as it is the 10th and being held in London for the first time - is in less than two weeks. Is suspect this will dominate my thoughts as for me it is THE premier cycle event bar none!!

The map and ride data fro this ride cane be viewed by clicking on the link below and all the photos were taken using my iPhone 6+ as I know some of you out there always like to know.